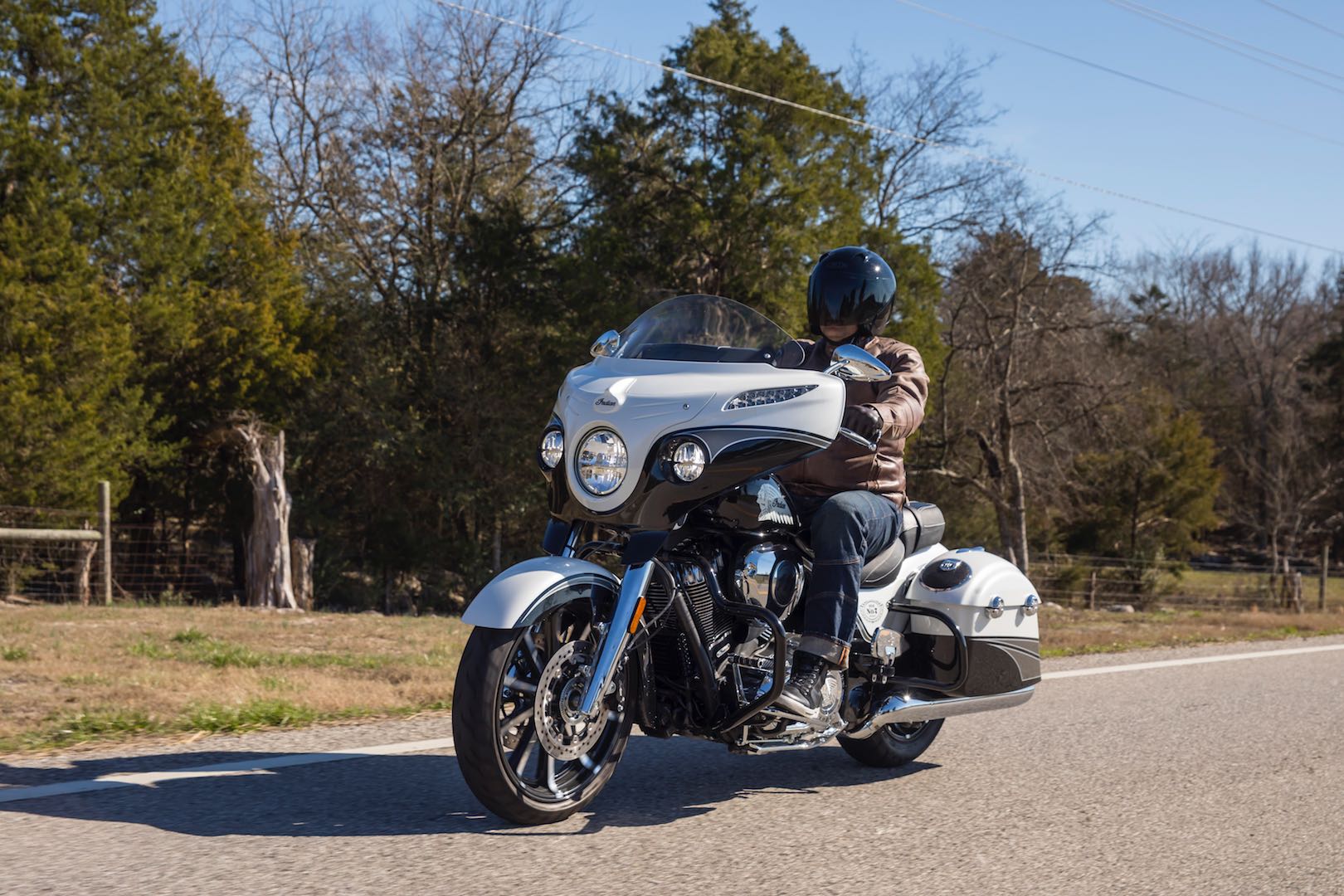 Motorcycles and whiskey are two of my favorite things—just not together, of course.Some serious Americana was built on motorcycles and whiskey, including two companies that became iconic worldwide—Indian Motorcycle and Jack Daniel’s. Both also carry similar America-forward taglines: Indian Motorcycle’s “America’s first motorcycle company” and Jack Daniel’s “America’s first registered distillery.”Last year, these two “America’s first” brands combined efforts with South Dakota’s well-respected customizers Klock Werks to released two limited edition Indians to celebrate Jack Daniel’s 150th anniversary.Only 150 models were produced, all built on Chief and Springfield platforms. The builds were unique because they demanded the use of Indian-produced parts exclusively. This helped keep prices lower and streamline production at Indian’s Spirit Lake, Iowa, facilities.This was the first time Jack Daniel’s put its name on a motorized vehicle. Besides offering some kick-ass styling, the Indians also helped promote Jack Daniel’s responsibility campaign—Throttles and Bottles Don’t Mix.These bikes didn’t last long; all were sold out within eight hours of public offering. The #001 Limited Edition Jack Daniel’s Indian Chief Vintage was auctioned off at the Barrett-Jackson Auction in Las Vegas last October, and went for $160K.All proceeds of that auction benefited Operation Ride Home, a partnership between the Jack Daniel Distillery and the Armed Services YMCA that provides funding and travel assistance to help Junior Enlisted military personnel spend time with their families during the holiday season.These three—Jack Daniel’s, Indian and Klock Werks—are out to make a similar impact in 2017 with the release of another one-off custom. Meet the Jack Daniel’s Indian Chieftain, which will be limited to 100 models.I traveled to Tennessee for a private tour of the Jack Daniel Distillery, and launch of this new limited-edition Indian. Jasper Newton “Jack” Daniel, a 5’ 4” man with a size four shoe, founded the company at the location—bought for $2,148—still used today due to the water from Cave Spring Hollow. The spring water, always 56 degrees, lacks iron and is rich in limestone—the perfect scenario for whiskey.Lynchburg’s population of fewer than 7000 residents has significance to the 250 million gallons of whiskey produced yearly, as well as the Indian build.“Coming from a small town like Emery, South Dakota, population 350, I can relate to Lynchburg,” says Klock Werks’ founder Brian Klock. “Looking at the storied history of Jack Daniels and Indian Motorcycles is very humbling.”“Having the team at Klock Werks chosen to call the shots for these two iconic brands is an honor,” Klock says. “Everyone continues to pitch in and make this American dream come true at all three companies. I have learned so much and continue to be in awe! It’s a good old fashioned gentlemen’s agreement type business at work.”The distillery tour and bike unveiling was followed by an in-depth lesson on Jack Daniel’s history and process during a whiskey tasting with Jeff Arnett, the seventh Master Distiller in the company’s 151-year history.

In a damp cinderblock building that houses the charcoal used for mellowing, Brian Klock and David Stang, National Sponsorship Director for Jack Daniel’s, unveiled the bike.The choice of the building was not coincidental. This year’s bike was inspired by Jack Daniel’s unique charcoal-mellowing process. Sugar Maple wood sourced from within an 80-mile radius of Lynchburg is ignited by non-charcoal mellowed 140-proof whiskey, and reduced to charcoal.This charcoal is packed 10-foot deep in a 14-foot vault. Whiskey is dripped into the charcoal, reappearing at the bottom 10-12 days later. This signature process is what makes Tennessee whiskey different from regular whiskey and bourbon and, for this sipper, much smoother on the palate. This process is also known as the Lincoln County Process.Klock translated this nicely into the design, which is highlighted by the white and black crystal paint that symbolizes the charcoal mellowing process. Next are shots of Old No. 7 logos and custom badging throughout—logoed billet driver and passenger floorboards, leather tank pouch, aluminum tank console with motorcycle number, and unique cam, primary and air intake covers.The part that truly takes prominence, though, is the handmade pure-silver Jack Daniel’s horn-cover badge handcrafted by the team at Montana Silversmith, and exclusively created only for the JD Indian. The pictures within this article surely speak the proverbial 1000 words, and then some.What also sticks out over the base Chieftain are the 19-inch contrast-cut front wheel with an open fender. All else is pure Chieftain—a machine ready to offer comfort for any long journey with only the best in touring amenities, including LED headlight and driving lights, power adjustable flare windshield, gloss black front mustache and rear highway bar, 200-watt premium audio system with fairing and saddlebag speakers, and Indian Motorcycle’s proprietary Ride Command infotainment system.Each bike arrives with a commemorative American flag handmade from a Jack Daniel’s barrel wood, and will sell for $34,999—a substantial $11,000 over the base Chieftain.

Besides admiring the JD Indian amid the creation of Jack Daniel’s signature charcoal mellowing, I rode it back-to-back with one of last year’s Jack Daniel’s Indian Chief—the same bike that sits in the store that concludes a distillery tour.I wouldn’t consider this a full review, considering I only rode the JD Chieftain for about 20 miles on some backroads around Lynchburg. It was more of an exclusive tasting of one of 100 models in existence.The only thing that changes on the Chieftain for 2017 is the addition of the Indian Ride Command System, which features a huge seven-inch screen and provides navigation and premium audio, plus Bluetooth to link with your iOS or Android device for music or calls.The touchscreen worked throughout the ride with my Oscar by Alpinestars Rayburn gloves. The display is fully customizable, allowing you to view whatever data you choose.Besides the digital touch-screen display, there are also easy-to-use navigation controls on the left handlebar, allowing you to easily switch through display screens or change your music.There’s no denying the Chieftain’s Thunder Stroke 111, the air-/oil-cooled 49-degree V-twin that produces 119 ft/lbs of torque at just 3000 rpm. This engine has a slow-revving nature, which provides for a smooth ride while ripping through some back roads. Fueling is perfect—never once did I experience a hiccup while riding the Chieftain.As expected for the flagship model of Indian’s bagger lineup, the amenities are tasteful. The fork-mounted fairing has an electronically adjusted windshield, and provides the perfect blend of vintage and new styling. Other highlights that make the ride much better are the hard bags with remotely activated locks, ABS, and of course cruise control.I rode this back-to-back with the older Jack Daniel’s Indian Chief, and the agility—especially at low parking lot speeds—and quicker steering is immediately noticed. This is due to the sharper 25-degree rake compared to the Chief’s leisurely 29 degrees.The new Chieftain weighs 860 pounds wet, which is hardly noticeable even at slower, stop-and-go traffic speeds. The quicker you get moving, the lighter it feels.Stopping the Chieftain provided the same satisfaction thanks to triple 300mm discs. Up front you find four-piston calipers, and a two-piston caliper in the rear. This setup provides optimal braking for the bagger. Also, the ABS is typical of Indian, and intervention is minimal when cranking on the binders.Riding the new Jack Daniel’s Chieftain is obviously fun and rewarding, but due to the killer looks, it is equally as fun and rewarding when parked. That’s when it’s time to pour yourself a glass of Old No. 7 straight up, never on the rocks, and admire the thought that went into what is the most attractive Chieftain in existence.

The outcome of the Chieftain parallels that of Jack Daniel’s whiskey. Both need a dedication to passion, such as Klock on the motorcycle build side and Master Distiller Arnett on the whiskey side.After the Chieftain was parked and began ticking to a cool, we sat down with Arnett for a testing of Jack Daniel’s finest, beginning with the a tasting of the product before and after sugar-maple charcoal mellowing.The before product—basically white lighting or moonshine—is harsh on the palate, leaving a fiery feeling from first sip down. The charcoal-mellowed version—now Tennessee Whiskey—is much smoother, but still lacks the true character that arrives from aging four-to-six years in barrels in the 80+ warehouses scattered across Lynchburg.The barrels are scattered for good reasons—some of the larger warehouses contain seven floors of barrels. That equates to a million gallons of whiskey that typically ages for four to seven years, contingent on Arnett and other tasters deeming it ready. If one of these places goes up in flames, look out; this is why Jack Daniel’s has its own personal fire brigade, which currently has 32 members.We continued to taste different blends, including four of the seven Jack Daniel’s blends offered today—from the popular Gentleman Jack, which is double charcoal mellowed (before and after aging), to Single Barrel to Tennessee Honey to Tennessee Fire to Old No. 7, the most popular of the bunch; back-to-back tastings present all nuances in tastes among them. The only two we didn’t taste that are currently offered were the Sinatra Select and Winter Jack.Though Single Barrel and Gentleman Jack take more time to produce and carry a higher price tag, my favorite remains good Old No. 7.Throttles and bottles may not mix, per the matching slogan, but in the case of Indian and Jack Daniel’s, they sure as hell complement each other. This is evident in the design of the Jack Daniel’s Indian Chieftain.Like last year’s Jack Daniel’s Chief and Springfield models, the new Jack Daniel’s Chieftain truly is a build that will quickly garner the attention of collectors and Indian Motorcycle enthusiasts.The bike is even more exclusive than Jack Daniel’s Sinatra Century, a limited edition whiskey bottled from only 100 barrels for Frank Sinatra’s 100th birthday anniversary.Though reluctance will surface, Sinatra Century buyers will pour themselves a glass periodically to experience the value of a 151-year-old company, just as Jack Daniel’s Indian Chieftain owners will surely ride their bikes periodically to experience the value of a 116-year-old company.Expect the JD Chieftain to sell out quickly, also, considering only 100 are available across the globe—maybe quicker than the eight hours it took to sell out last year’s Jack Daniel’s Indian Chief and Springfield models.Riding Style:Photography by Indian Motorcycle