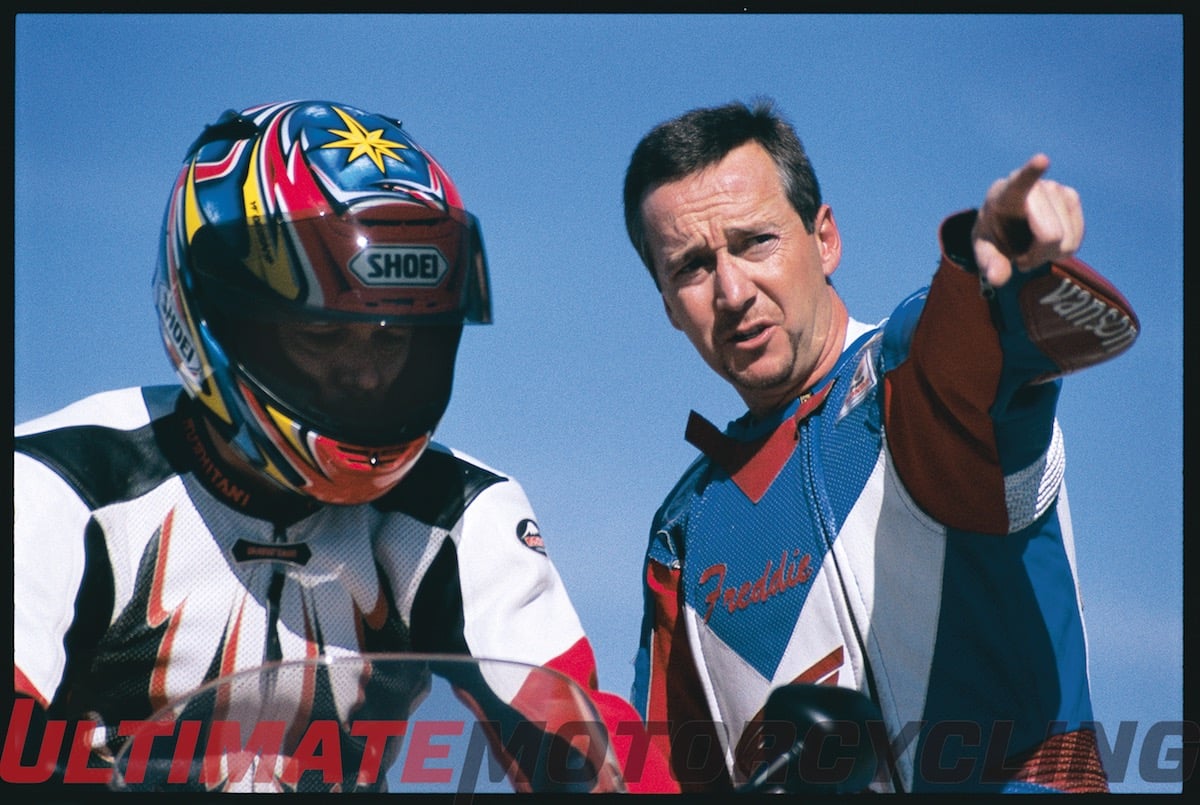 Welcome to the Ultimate Motorcycling retro review archives; we’re revisiting some of our favorite reviews from year’s past, highlighting the machines, events and schools that laid the rubber for modern motorcycling. Enjoy. – Ron Lieback, ed. 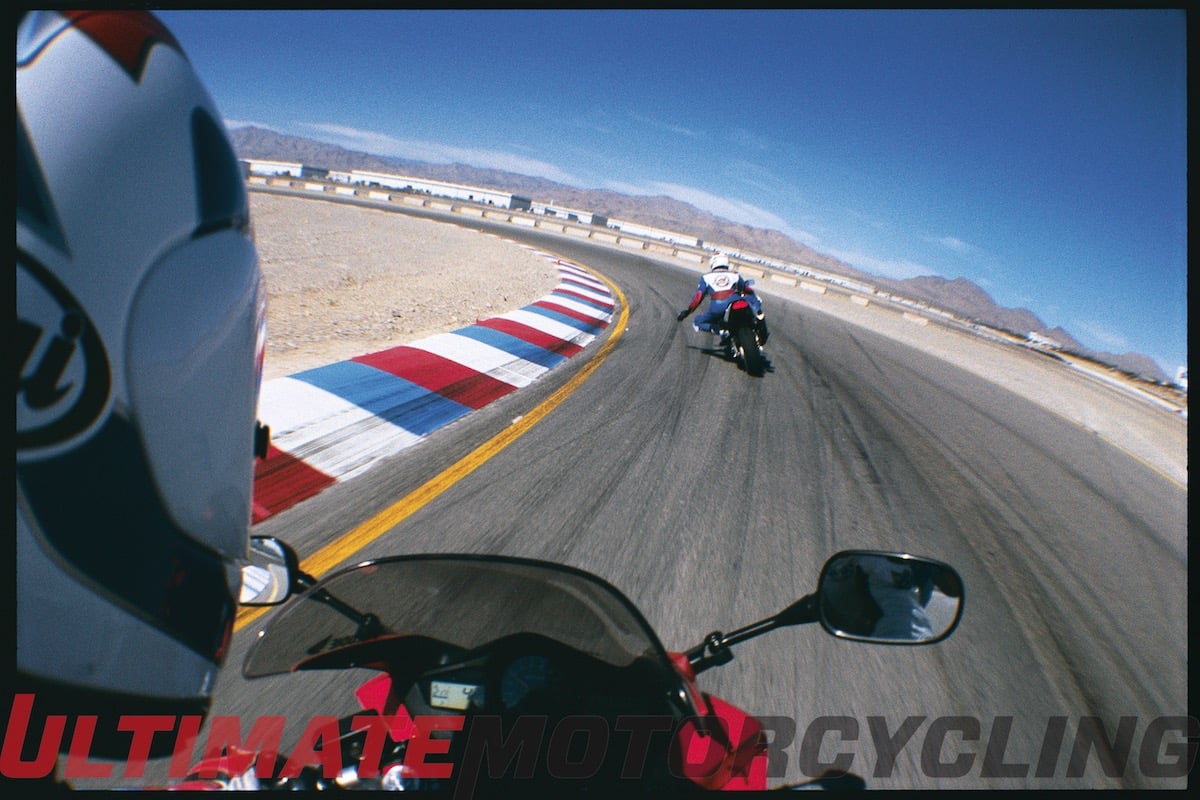 When Freddie Spencer’s father advised “Remember that the person who is best prepared is the one most likely to win,” his young son took notice. From the beginning, young Freddie analyzed every aspect of his riding, and this ultimately led him into developing a system he could repeat. “If I learned how to ride the bike properly — I knew that the race would take care of itself,” Spencer told me his father said.It turned out to be a very different, and interesting, approach to racing. For instance, one challenge the young Spencer regularly worked on was as simple as making sure he was in the correct gear for each corner, and with only that in mind he’d then practice until flawless at that before moving on to the next chosen task. Ultimately, Spencer was able to repeat each of his actions automatically and rhythmically, corner after corner, lap after lap, race after race.This level of focus helped Spencer break the Suzuka Circuit lap record as a 19-year-old on his first ever visit, and on only his ninth lap! Not least, it also helped turn him by 21 into the youngest 500cc Grand Prix Champion the world has ever seen. 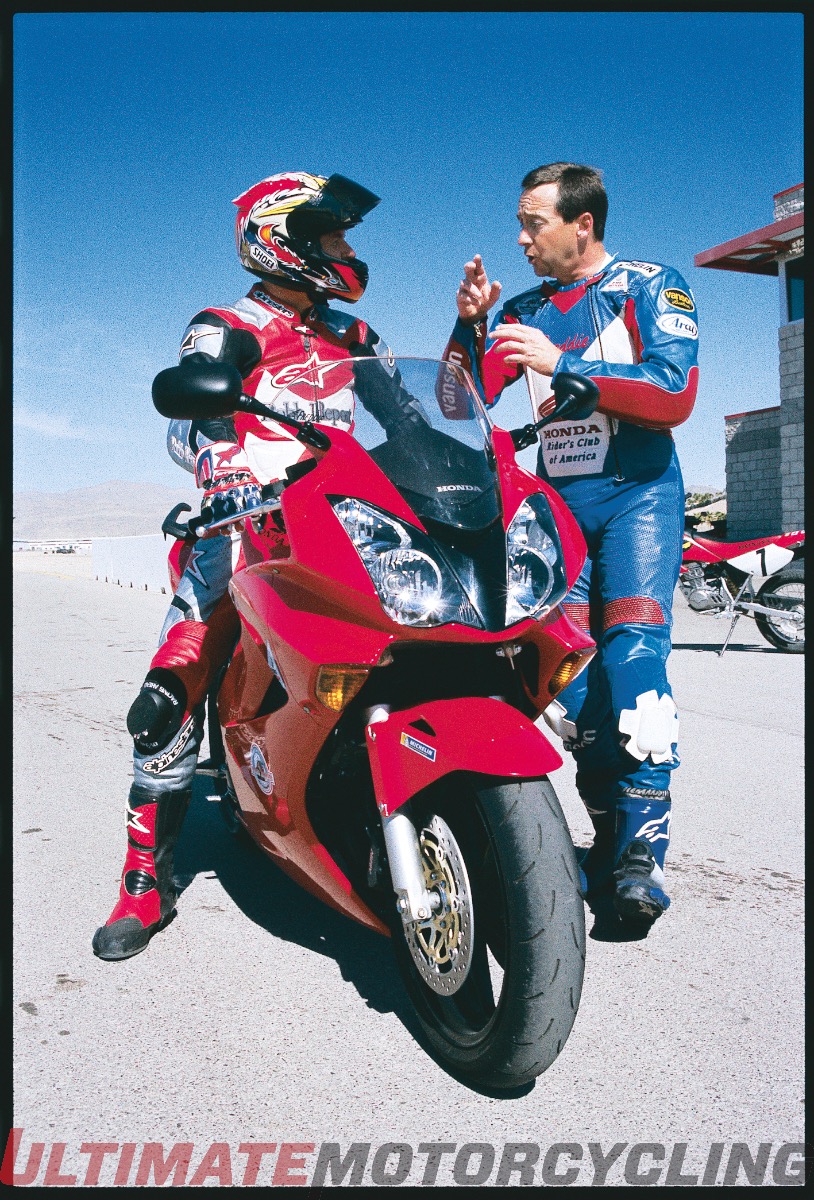 Born December 20, 1961 in Shreveport, Louisiana, Freddie Spencer began racing dirt track motorcycles at age four. He started road racing at 11, and by 15 had won a dozen national championships. Turning pro in 1978 at 18, Spencer won every race in the novice AMA 250cc Grand Prix class, clinching his first National Championship.In 1983, Freddie became the youngest rider ever to win a 500cc World Championship, beating Kenny Roberts in the final race of the season, by only two points. In 1985, Freddie captured both the 250cc and 500cc World Championships—a unique feat to this day. In the 11 500cc races, Spencer qualified first nine times, won seven races, and set nine new track records. That same year, he also won all three major divisions—250cc, 500cc and Superbike—at Daytona. Spencer is the first and only competitor ever to do so.However, World Champion racers do not necessarily make world-class teachers. Indeed, many who excel in their chosen field simply don’t know how they do it. Freddie Spencer is different.Having won three World Championships and retired from racing, Spencer realized that his carefully honed methodology would make a perfect springboard to help other motorcycle riders at all levels advance their skills. In 1997, the Freddie Spencer High Performance Riding School was established at Las Vegas Motor Speedway.Freddie Spencer chose Las Vegas Motor Speedway carefully. “I liked that it was a new facility,” he said, “and I was able to give input on the track layout. Plus, of course, I like living here.” Well that’s all very impressive – but how can Freddie help? One of the answers lies in developing smooth and confident machine control.With Freddie’s system, you will learn ‘slow hands’ and then go on to discover various other tools at your disposal—tools you’re probably not using now. You will become more aware within your riding environment, more aware of potential dangers and opportunities ahead of you, and you will be better prepared to either avoid or take advantage of them. It’s those vital seconds and the ability to think clearly during them that will buy you precious safety and a much more enjoyable road riding experience. 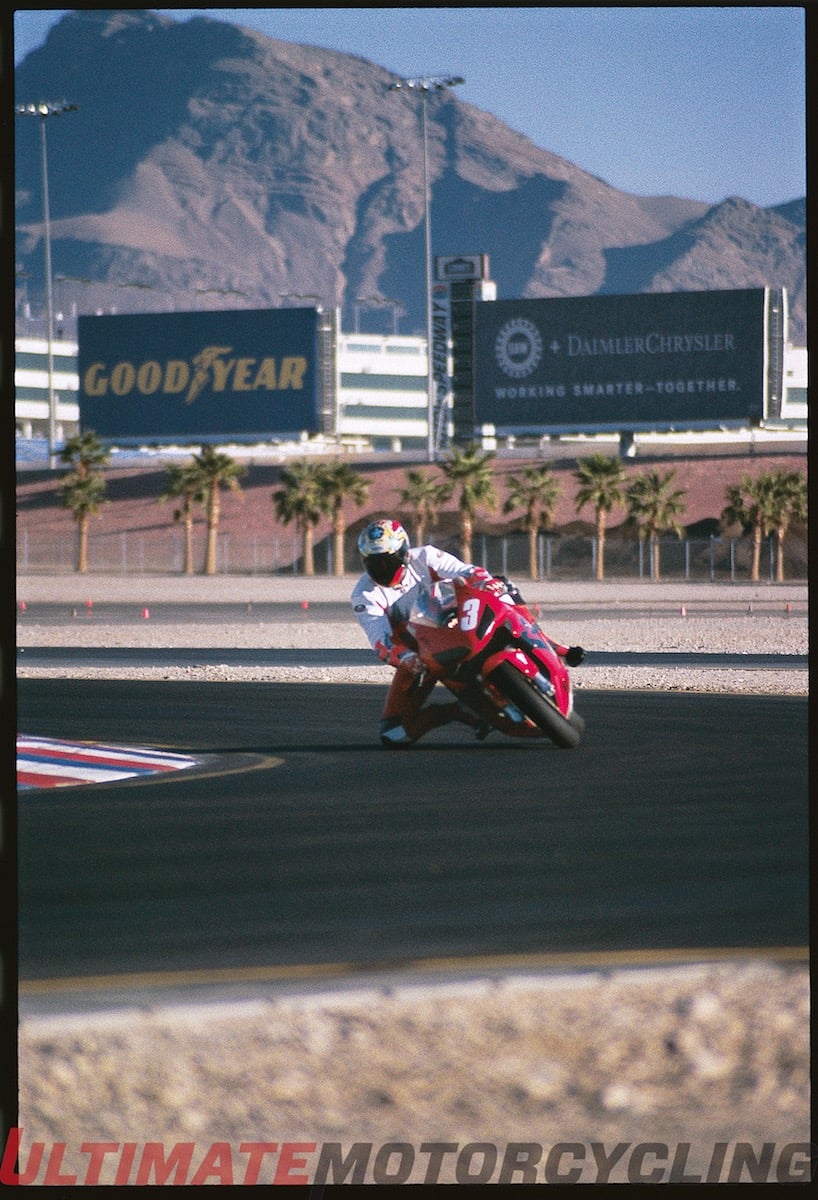 To help in his teaching quest, Freddie has assembled a team of like-minded experts to aid in communicating his secrets. Nick Ienatsch, Jeff Haney, and Dale Kieffer—all with very impressive race resumes themselves—make the learning process interesting and effective by adding a touch of light-hearted banter to help keep things fun. But, don’t let the grins fool you into thinking there’s anything flippant here.These are extremely well credentialed individuals who take their job very seriously. They’re astute, observant and very dedicated professionals determined to help you by first demonstrating, and then challenging, goading, and pushing you into coming away from their class a better and safer rider.“If you fall off a bike, we take it personally,” Ienatsch observed, and I assumed he meant not just at the school, but also after the course had finished. His sincerity is obvious. Most accidents are avoidable, and Ienatsch immediately starts the first classroom session by stating unequivocally “one or more of four things cause a crash: Lack of mental focus, abruptness at the controls, rushing into situations, or repeating the same mistakes.”After a detailed explanation and discussion we headed to the track and tried to put the theories into practice where constant drills and exercises are cleverly designed to help combat the four issues. With the help of on-board video reviewed later in the classroom, you received critical analysis and expertly executed demonstrations. This gave me ample opportunity to test out Spencer’s theories.I found incredibly useful to focusing on just one simple task at a time and then being shown what to do, and sometimes what not to do. It was tough at first, but eventually my frustration at my ineptitude eased as I practiced and then gradually found improvement. I discovered I was listening intently to every word, and then later fought to implement what I’d heard on the track. These lessons will stay with me forever. They’re simple, brilliantly put across, and damned difficult to execute.If all this sounds a little high-pressure, rest assured that it’s only self-imposed. There are no winners or losers in this class. There’s no timing of laps, no ‘slow guys’, no undue criticism when you get it wrong, and there’s no pass or fail. There is, however, persuasion to get it right.The critiques are never mean-spirited and I was interested to see that everyone listens attentively to everything, trying to figure out what they could learn. Spencer himself cautions you to ride well within your limits. “I’ve never learned anything riding at ten-tenths,” he told us. Out on the track, that thought helps temper your enthusiasm just a little. 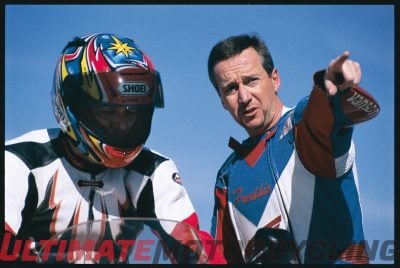 A consistent theme throughout the two days was to instill confidence, overcome nervous fears and take away pressure. You’re encouraged to learn at your own pace and within your own personally defined comfort zone. Above all, you’re expected to have fun!Having spoken to Freddie Spencer and his team at length I have come away with nothing but admiration for every single one of them. Their commitment is extraordinary and, if winning is in the details, then this school stands atop the podium. I found the level of professionalism throughout to be remarkable and it further strengthened my faith in what I was being taught.For those willing or curious enough to challenge themselves — no matter what level you ride at or what type of machine you ride on, the Freddie Spencer High Performance Riding School will help you, fascinate you and perhaps even save you from an expensive mistake. Eyes up—you’ll learn what that means in class—and head straight for Las Vegas Motor Speedway.Editor’s note: The Freddie Spencer High Performance Riding School closed in 2008.Photography by Johansen Krause