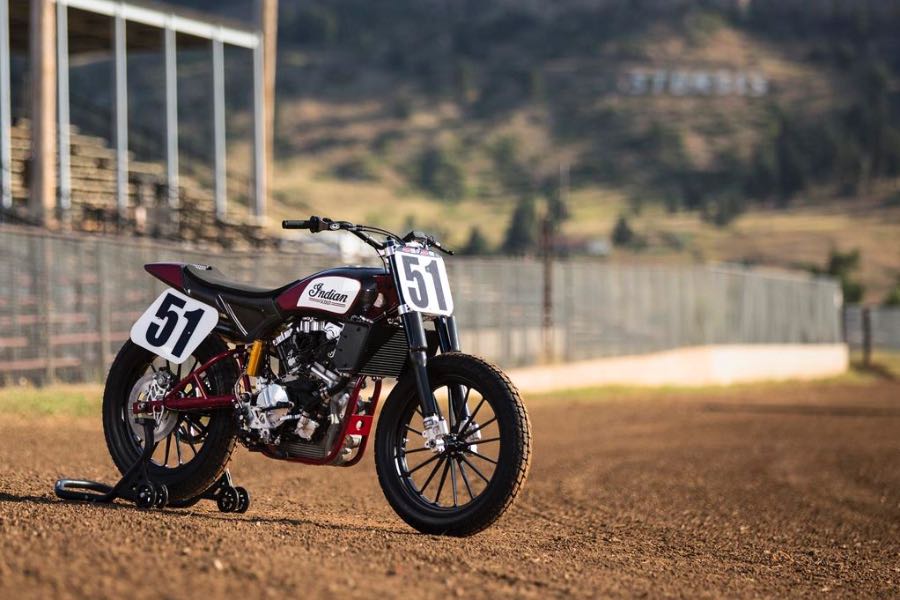 Indian kicked off the 76th Sturgis Motorcycle Rally in pure American V-Twin style by revealing its all-new Scout FTR750 flat track race bike. Sturgis was the optimal location to launch the bike – the South Dakota town helped put the Indian brand on the map.During the launch, Indian also announced its official return to professional flat track racing; the Scout FTR750 is poised to make some waves in AMA flat track this coming season.Revealed at the “Motorcycles as Art” industry event that took place at the Buffalo Chip in Sturgis, Indian had a host of special guests to welcome the new addition. On deck were the two surviving members of the Indian Wrecking Crew, Bobby Hill and Bill Tuman, both of which are AMA Hall of Fame members.Sadly, the third member of the Wrecking Crew, Ernie Beckman, passed away in 1999. The FTR750 sported Tuman’s #51 as a tribute to the last rider to win a Grand National Championship aboard an Indian, all the way back in 1953.“A heritage of racing and winning is in the lifeblood of this brand, and everyone in attendance was clearly proud to be a part of this important moment in the historic return of Indian Motorcycle to professional flat track racing,” said President of Motorcycles Steve Menneto.“We have an incredible team of engineers and designers working on this initiative, and all of us are deeply committed to building a world-class racing program that will live up to our legendary history on the track.”The all-new Indian Scout FTR750 features a high-revving, racing V-Twin engine developed in-house and is wrapped in a unique steel frame that allows for a tight wheelbase, large centrally located airbox and unique lightweight carbon-fiber body. The design of the race-only bike reflects the heritage of key Indian racing models from history including the Big Base Scout; a historic bike that won in Daytona, dominated events across the country and is still raced in Vintage competition today.The all-new Scout FTR750 is an uncompromising, authentic flat tracker. A high-revving, purpose built V-Twin sits at the heart of a steel frame, and compact wheelbase, complimented by a lightweight carbon fiber body – it means business. Indian has unleashed the FTR750 as something as a statement, showing their American racing heritage to the world and a reminder that as a brand, they’re in touch with their routes.Our only hope is that this thing gets a street homologation.For additional information, visit Indian Motorcycle.