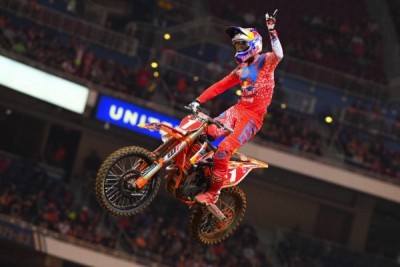 Reigning Monster Energy AMA Supercross Champion Ryan Dungey took another step toward defending his crown with a win inside The Dome at American’s Center in St. Louis. It is Dungey’s third win in a row on his Red Bull/KTM 450 SX-F, and eighth victory of the season, putting Dungey 48 points ahead of Soaring Eagle/Jimmy John’s/Suzuki Factory Racing’s Ken Roczen with three races remaining. A win next week at Foxborough will clinch the 2016 Supercross Championship for Dungey.

It was a bit tougher night than usual for Dungey, as he was 7th in afternoon qualifying and hit the dirt in his Heat race, forcing Dungey to qualify for the Main from the Semi, which he did easily. 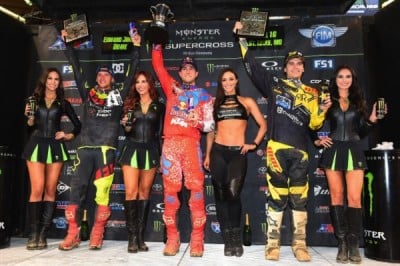 For the Monster Energy Supercross Main’s six opening laps, there were two distinct battles up front, with Dungey managing a slim lead over Roczen, and Brayton holding off a charging Anderson. On Lap 7, however, Anderson took Brayton wide exiting a 90-degree right hander, and the two collided. Brayton went down, and Anderson took secure possession of 3rd. Brayton remounted in 8th and eventually finished 9th.

Roczen kept Dungey close, and nearly took the lead at the midway point, but was never able to successfully complete a pass. Trailing Dungey by about a second, Roczen came into the first turn after the finish line starting Lap 13 and washed out the front end. Anderson passed Roczen and Dungey was unchallenged for the remainder of the race. 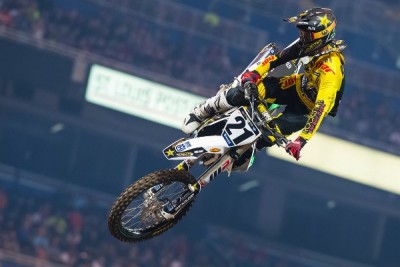 After picking his bike up off the dirt, Roczen took off after Anderson, and would get close, and then make small mistakes to give Anderson some breathing room. Roczen made a final charge on the last lap, passing Anderson just a few turns after Roczen better managed the overtaking of lapped riders. At the end it was Dungey-Roczen-Anderson for the third consecutive week.

GEICO Honda’s Justin Bogle converted a 7th place start into a 4th place finish, the best of his rookie year in the Monster Energy Supercross 450SX class. After being passed by Autotrader/Monster Energy/Yamaha’s Weston Peick on Lap 2, Bogle moved forward, re-passing Peick on the next lap, going by Brayton when Anderson put him down on Lap 7, passing a fading Red Bull/KTM’s Marvin Musquin (returning from a wrist injury) on Lap 9, and finally taking it to Monster Energy/Kawasaki’s Josh Grant on Lap 12 for 4th place. From there, it was a lonely race for Bogle, who finished 20 seconds off the podium, and four seconds ahead of Trey Canard, who recovered from his involvement in the first-turn mishap.

While Canard moved from 15th on Lap 1 to a 4th, Reed had his own strong comeback. Reed was in last place going into the first turn, though he did not go down, and was 13th on Lap 1. By Lap 6, Reed was behind Bogle, with Peick and Brayton between Reed and Canard on the following lap. Lap 8 was big for Canard, as he picked off both Peick and Brayton.

Canard bested Reed on Lap 15, and Grant on Lap 19. Grant finished on the track ahead of Reed, but Grant was penalized two positions for jumping on the red cross medical flag—the same penalty handed to Dungey who committed the same offense in Detroit. Reed was promoted to 6th and Tomac moved to 7th, while Grant dropped to 8th. Smartop/MotoConcepts Racing’s Mike Alessi won his Heat race, and finished 10th in the Monster Energy Supercross Main Event.

Yoshimura/Suzuki Factory Racing’s James Stewart, a two-time Monster Energy AMA Supercross Champion, had yet another aborted comeback attempt. While running in a qualifying position in his Heat, Peick made a huge jump into a 90-degree right-hander, slamming into Stewart. Stewart, who was already nursing hip and ankle injuries, went down hard and was out for the night.

There were three significant milestones reached at The Dome at America’s Center. Reed started his 200th Monster Energy Supercross Main, and Dungey earned his 30th 450SX victory, as well as his 30th consecutive podium (improving the record that he holds), dating back to the second round of 2015.

Don Williamshttp://www.ultimatemotorcycling.com
With 50 years of riding experience, Don Williams is a fan of all kinds of motorcycles. He enjoys sport bikes, cruisers, dirt bikes, touring bikes, adventure bikes, dual sport bikes, and rideable customs. Ask Don what his favorite bike is and he will tell you, "Whatever bike I'm on."