If anyone doubted MotoAmerica, lay your reservations to rest because American Road Racing is back. The opening round at Austin’s Circuit of the Americas, which ran as a support series for MotoGP, reminded us of the days when Ben Spies and Mat Mladin were leading the series.On Sunday, all eyes were up front with the Yoshimura Suzuki team, which once again was untouchable, breaking Yamaha’s domination streak. Just as in Saturday’s COTA MotoAmerica race one, action was heated between Yoshimura Suzuki rider Roger Lee Hayden and fill-in rider, Moto2 Champion Toni Elias. The substitute rider of Spain claimed victory twice this opening race weekend.Starting from pole, Hayden set off to an early lead, breaking away from the pack. He maintained this lead for a short few laps before Elias challenged and took over. The GSX-R1000 pilot Elias rode with complete aggression, braking and making passes that made for anxious moments.Elias lead for the majority of the entire-15-lap race, eventually winning by over 4.063 seconds. Earning the final podium position was four-time AMA SuperBike title holder Josh Hayes; the Monster Energy Yamaha YZF-R1 pilot finished over 15 seconds off the pace.Speaking after the race, Elias says: “Today has been fabulous because it has been a difficult, the bike was perfect, and Hayden was really strong. I try to push maximum after three laps. He was there the whole time.” The two swapped positions until the last portion of the race where Elias was finally able to secure victory in the penultimate laps.“Our pace was fast, almost qualifying laps. Really happy to start the season like this. To sweet the weekend in both qualifying and races just shows how hard the team has been working,” Commented Hayden.The younger brother of 2006 MotoGP Champion Nicky Hayden maintained a close grip on Elias until he finally lost the lap times and settled for second a second place finish in the closing moments of the race. “Toni coming in has made me step up,” he added when asked about Elias’ entrance into MotoAmerica. As the weekend closed, Yoshimura Suzuki finished first and second for both races.Hayes took home another third place finish but Sunday’s race told a very different story. “I haven’t taken a beating like that in a long time, it’s a hard pill to swallow.” Hayes rode a lonely third place race today, hanging in a no man’s land between the Suzukis and his fellow Monster Energy/Graves Yamaha Rider Cameron Beaubier. “Maybe that thing isn’t so outdated,” Hayes said in reference to the two Suzuki GSX-R1000 Superbikes.The reigning MotoAmerica Superbiek Beaubier finished fourth. It was a bit of an upset for Beaubier who looked to be a podium contender this race, after picking up a DNF due to a crash on Saturday. The current defending champ seems to be getting battle the curse of the #1 plate as he appeared to have some sort of shifting issue coming into turn one. This saw him drop back, but as a testament to that man’s skill and determination, he quickly pushed back up into a redeeming fourth place, securing some early championship points.Bobby Fong aboard the Latus Motors Racing Kawasaki ZX-10R claimed a comfortable fifth place. But the battle for sixth kept our attention between Claudio Corti aboard the Aprilia HSBK Racing Superstock 1000 RSV4 RF, Josh Herrin aboard the McGraw Powersports/MEEN Yamaha Superstock 1000 YZF-R1, and Danny Eslick of TOBC Racing YZF-R1 Superstock 1000.Herrin led the pack and showed that his bike had a lot more grunt than the competition. Powering out ahead after trading passes with Corti, Herrin made impressive outside moves. Eslick trailed them for a few laps until he made a daring more that pushed both riders out of his way and off their racing lines.It was a pass that he couldn’t maintain for too long but still nipped at their heels. When it all came down, it was a photo finish between Corti and Herrin with Corti eking out a sixth place finish. Herrin took a close seventh place finish with Eslick right on his tail.Jake Gagne aboard the Broaster Chicken/Roadrace Factory/Yamaha Superbike took home an upsetting ninth place finish. At one point during the race, we saw him wave riders through which singled that he was having some issues. What those issues were weren’t clear during the race but it impacted his times heavily. The upside is that he didn’t have to retire and was still able to earn some points towards the championship.Rounding out the top ten was Taylor Knapp aboard the Motorcycleeverything.com Yamaha Superstock 1000 YZF-R1.It was an exciting race to say the least and more importantly, brought to you live on the beIN network. The European riders like Elias and Corti displayed a level of skill that shook the Americans, not to mention skill as they’ve never been on these tracks prior to the race weekend. In the case of Elias, if he’s able to keep his performance up at this level, Yoshimura Suzuki managers have said that they’ll try to bring him on permanently once Jake Lewis is back on the scene.This mixture of Superbike and Superstock 1000 motorcycles has certainly proved that things will still be competitive and more importantly, interesting for us racing fans. If the opening weekends serves as one thing is this: that the 2016 MotoAmerica FIM Road Racing World Championship is a force to be reckoned and we’re sure to see some of these contenders move into the world leagues soon enough.For all the latest coverage of the 2016 MotoAmerica FIM Road Racing Championship, keep your browsers open to www.ultimatemotorcycling.comDid you see the race? Have any thoughts on the upcoming season? Share your thoughts below!Photos by Brian J. Nelson 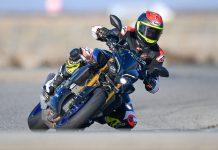