A triple treat for those with a need for speed: Bonneville A Century of Speed and Bonneville National Speed Trials, S.C.T.A, Vol. 1 and 2 by Dave Fetherston and Ron Main

Bonneville A Century of Speed—2nd Edition:

In 2014, the Bonneville Salt Flats near Wendover, Utah, marked 100 years since the first land speed record was set there.It all started in July, 1914, when automobile race promoter Ernie Morass arranged for his car called the “Blitzen Benz II” and his driver, Teddy Tetzlaff, along with timers and about 150 spectators to be brought by rail to the salt flats. Tetzlaff roared through the measured mile at 141.73 mph to set a new, if unofficial automobile land speed record.Since then, literally hundreds of land speed records have been set by vehicles with two, three and four wheels (some even more, like George Eyston’s eight-wheel Thunderbolt), powered by everything from piston, electric, steam and gas turbines to jet engines. In Bonneville A Century of Speed—2nd Edition, motorcycle record attempts and images are given their due, making the book a comprehensive history of land speed racing of interest to motorcyclists, as well as automobile buffs.Keeping track of who set the historic class records and when through Bonneville’s first century would be a daunting task, but fortunately, we don’t have to. Co-authors Dave Fetherston and Ron Main (Main himself being a part of land speed racing legend) have done it for us.Bonneville A Century of Speed—2nd Edition is a spectacularly illustrated history of land speed racing in general and the first century of Bonneville’s role in it. Spanning 328 pages, with hundreds of color and historic black and white images, many presented at full-page size, the book takes the reader back to the very first land speed record attempts up to the records set as recently as 2014.Perhaps one of the best aspects of the book is that proceeds benefit the Save the Salt Foundation, which is working with public and private partner organizations to fund projects to prevent further deterioration of the salt surface and to restore it through salt deposition (brine pumping) and other means. 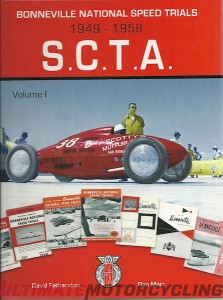 Despite the huge effort it took to compile the information for Bonneville A Century of Speed—2nd Edition, Fetherston and Main also collaborated to create even more in-depth history of land speed racing in the twin books, Bonneville National Speed Trials, S.C.T.A, Vol. 1 and 2.Volume 1 covers the years 1949 to 1958 and Volume 2 covers 1959 to 1968. Starting with the development of dry lake bed racing in southern California in the mid-1920s, Volume 1 covers the occasionally chaotic state of land speed competition and how the formation of the Southern California Timing Association (SCTA) in November, 1937 helped bring order to the scene.In 1949, SCTA began sponsoring land speed racing events at Bonneville, the first annual being held from August 22 to 27. Making the coverage of the twenty years included in the two volume set particularly fascinating is the inclusion of complete reproductions of the event programs of that first twenty years. Even the advertising from those programs is presented. Also, the advance entry lists and names of the event organizers are included, making for a remarkably complete and authoritative historic record of each event.Period images and articles about the people involved, how the events are conducted, engines inspected and timing is done take the reader inside the events and provide insight into some of the sport’s most significant personalities. 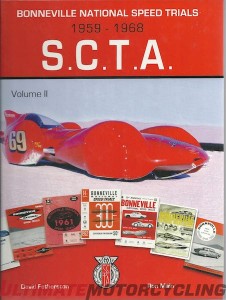 In 1951, SCTA invited ten of the country’s leading motorcycle competitors to participate in the Bonneville Nationals, which, in turn, led the American Motorcyclist Association (AMA) to officially recognize records set at the event, as well. From that point, the motorcycle entry list grew each year along with the cars, trucks and nearly all manner of exotic streamliners.With a total of 688 pages (321 in Vol. 1 and 367 in Vol. 2), Bonneville National Speed Trials, S.C.T.A, Vol. 1 and 2 together with Bonneville A Century of Speed, combine for 1,016 pages of motorsports history for cars as well as motorcycles.We decided to provide a look at the three together because when purchased together, the three books are offered at a discount. In any event, it’s good to know that the proceeds benefit Bonneville salt restoration and preservation. For more information on all three books, visit David Fetherson.Book Data: When the three books are purchased together, Bonneville A Century of Speed is priced at $35.95 and domestic shipping is free.