The American Ricky Brabec is the new addition to Honda’s Team HRC fold. The team’s fifth member, set to compete aboard the Honda CRF450 Rally  in the 2016 Dakar Rally, arrived on scene after a whirlwind of success in American desert raciung

Team HRC’s newcomer has followed the footsteps of other American off-road riding legends such as Jimmy Lewis, Quinn Cody and the late Kurt Caselli. But Brabec’s specialization is in desert racing. In 2014, Ricky Brabec reached a historic milestone after sweeping everything in his discipline: The Hare & Hound competition, best in the Desert and the SCORE International, as well as the reviled Baja 250, 500 and 100. To say that the American is dominating would be an understatement. Now he faces one of the greatest challenges yet – the fabled Dakar rally – as he becomes the youngest American rider to test his mettle.

Born and raised in Southern California, Brabec dreamed of becoming off-roads number one rider, having looked up to previous Dakar finishers like Lewis, Cody and Caselli. His passion started early in life, and by the age of 16, it was already evident where he was going.

Team HRC Team Manager Wolfgang Fischer put Brabec into Team HRC for a trial in the first round of the 2015 FIM Cross-Country Rallies World Championship; Brabec raced in the Abu Dhabi race as a “wild-card” entry. Aboard his Honda CRF450 Rally, he did very well, letting Fischer’s gamble on the American churn out a fifth overall finish and ranking at the top of the junior category (under 23).

And now, here is some Q&A with the American:

What does it mean to you to be part of Team HRC?

Rick Barbec: Being a part of HRC is amazing, I don’t really even have the words because as a kid I wanted to ride with Honda, but now it’s a dream come true and I feel truly blessed. It means so much to me to be in Team HRC with the best riders in the world. I have worked so hard for this day and now I can’t wait to show what an American has in the rally world.

Earlier this year you participated with Team HRC in Abu Dhabi. What feelings did you have hopping onto the Honda CRF450 RALLY for the first time?

RB: For my first time abroad I was honestly so nervous to get on this big rally bike that I had never seen up close, let alone race it! I was in shock when I got there to see it and set it up to my tastes. It was all very exciting.

Abu Dhabi was your first World Championship rally. How was the experience?

RB: The experience in Abu Dhabi was unreal with five days of rallying, navigating in nothing but sand dunes. For me, it was difficult, but then again I told myself, “This is my first time on the bike and I just need to get used to it and get through to the end of each day.”

After winning everything possible in the American desert last year, what is your next challenge?

RB: My next challenge now as a racer is to become a navigator and expand my career in the rally world with HRC. I had great successes in 2014 and 2015, but my next experience will be to expand and excel in the rally world. 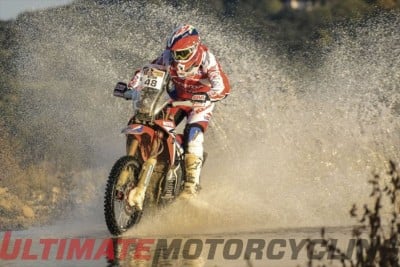 How do you feel after overcoming injuries sustained in a hard fall in the American Hare & Hound competition?

RB: The injuries I had this year in 2015 were tough on me for sure. I overcame them with the help of my great friends and family who kept me straight and I continued to tell myself that there’s always another race and it’s a long road ahead of me.

Recently you have been in Europe, training with your teammates and riding the Dakar bike. What can you tell us about these intense weeks with the team?

RB: Being here in Europe is great, finally spending time with the team and riding the rally bike. I think it will help me so much for the Dakar. The days here are long and the riding is great, not like the Californian desert that is for sure.

There are just a couple of weeks left before the Dakar. What do you expect from your first participation in this race?

RB: For my first Dakar, I’m arriving with a great attitude and, to be honest, my expectation is just to finish solidly and keep my team-mates heading towards the top spots on the podium. It’s my job to make sure they don’t get left in the desert with any problems. Because that, I’m preparing in US with the help of Johnny Campbell in order to improve my skills. I just want to finish well, help the team out and make my country happy once the rally is over.