Home Motorcycle Racing News AMA Supercross/Motocross 2015 Arlington Supercross Commentary | Upside/Downside
Facebook
Twitter
Linkedin
Pinterest
Email
Print
WhatsApp
ReddIt
About the most excitement we saw at the Monster Energy AMA Supercross round at AT&T Stadium in Arlington were two red-flagged races, a full restart to 450 Heat 1, and a staggered restart for the 250 Main. Other than these events, which gave everyone a redo — for better or for worse — the racing was fairly processional after the first few laps. Everyone liked the dirt (first time ever?), which did lead to some aggressive riding and unforced mistakes. Let’s see who was on the Upside and Downside this week.Upside 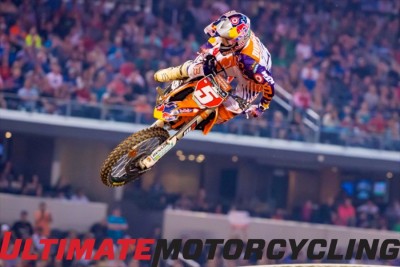 Ryan Dungey – Red Bull KTM: With his second win of the AMA Supercross season – matching Ken Roczen’s two wins – and in the same dominating style as A3, Dungey took the SupercrossLive.com Holeshot award, led every lap to the finish, and pulls a 12-point gap on Roczen, solidifying the confidence he’s been building thus far. We’ve got a serious battle brewing between last season’s teammates. “I’m really excited to get another win,” Dungey said. “It feels great to see the hard work pay off and I’m excited to increase the point lead on the championship.”Blake Baggett – Yoshimura Suzuki Factory Racing: Having to qualify out of the Semi when Mike Alessi put a hard pass on him in the last turn of his Heat, Baggett didn’t have the best gate pick. Still, he managed to get his RM-Z450 off the line in 3rd, and was well placed to pick up a spot when Davi Millsaps went down before the halfway mark. Baggett rode a solid race to a season best 4th place result. “We’re just a few seconds from being on the box,” Baggett said, “and I’m just going to keep plugging away and try to keep my momentum going in Atlanta.”Andrew Short – BTOSports.com KTM: Short transferred to the Main by winning Semi #2, and then took care of business getting his KTM-450 SX-F Factory Edition off to a good start behind Trey Canard. Although he was not able to gain any ground on the Honda rider, he maintained a steady pace in front of Jason Anderson, finishing in 5th. It’s great to see Short back up in the Top Five, matching his best finish this year.Josh Grant – Discount Tire/TwoTwo Motorsports Kawasaki: Grant is finally starting to eke out a little momentum to the Upside, and you can almost hear an audible sigh of relief. He started 8th, finished 8th – his best result of the season – and actually collected double-digit points. Whew!Josh Hill – CycleTrader.com/Rock River Yamaha: Looking eerily like last week’s race, Hill found himself in the LCQ again and in danger of not qualifying for the Main through the first two laps of the short four-lap sprint. Hill had a terrible gate pick for the Main, but worked his YZ450F up to a 12th place finish. At this point, qualifying, and finishing, is an upside for the veteran rider.Tony Archer – Traders Racing Kawasaki: Representing his team in the 450 class for the East Coast rounds of the Monster Energy AMA Supercross season, Archer qualified for the Main by holding off Hill for the final transfer spot in Semi #1. Tweeted the Maryland rider after the race, “Not too pumped on my riding in the main. Got right after about 10 laps. But all in all a great way to start my sx season!”Downside

Eli Tomac – GEICO Honda: Tomac’s momentum is swinging the wrong way. If he’s going to contend for the title he needs more patience, focus, and consistency. We’ve seen the speed, but we’ve also seen the sub-par starts and the mistakes. Saturday he squandered his third-up gate pick by getting a mediocre start, then high sided on Lap 4 while running 7th, his eventual finishing position. While he remains 4th overall in points, he’s losing ground every week. “I’m never one to make excuses but I was just down on power today, to be honest,” Tomac said. “I think I might have overdone it a bit in practice and maybe having to travel east hurt. I’m not sure. I just didn’t have anything in the tank.”Davi Millsaps – Monster Energy Kawasaki: Millsaps was fast in practice and qualified directly from his Heat, then got a great jump off the gate and tucked his KX450F in behind Dungey. They immediately pulled a little gap and started clicking off laps; it looked like this was finally going to be a good night for Millsaps. Instead, Millsaps looped out trying to accelerate off the landing of a jump on lap 6, went down hard, and was out for the night. This is the second weekend in a row where Millsaps takes away just one point.Weston Peick – AutoTrader.com/Toyota/JGR Yamaha: Peick was fast and feisty in the first two rounds of the series, looking very much like he meant business. So, it was a huge bummer when he broke his foot while finishing 4th in Phoenix. Fans were eager to have Peick back in the mix at AT&T Stadium, and he looked like he had lost none of his speed during the four weeks off, qualifying directly out of his Heat behind Trey Canard. It was a huge disappointment to see him go down in the first turn and having to call it a night due to a reported knee injury.Cole Seely – Team Honda: Seely had a long night in Arlington, having to transfer out of the LCQ after losing an exciting battle with Baggett and Roczen for the last transfer spot in his Heat. Seely then tucked his front end in the Semi, so found himself having to qualify out of the LCQ, which he won. Seely went down on Lap 4 of the Main, and finished the night with a 10th place result. “The night was definitely tough,” said Seely. “I haven’t felt well since I arrived this week for press day. There are some nights where you’re just glad it’s over, and this is one of those nights.”Photograph by Simon Cudby2015 Monster Energy AMA Supercross 450SX Results – Round 7 – Arlington
1. Ryan Dungey – KTM 450 SX-F Factory Edition
2. Ken Roczen – Suzuki RM-Z450
3. Trey Canard – Honda CRF450R
4. Blake Baggett – Suzuki RM-Z450
5. Andrew Short – KTM 450 SX-F Factory Edition
6. Jason Anderson – Husqvarna FC 450
7. Eli Tomac – Honda CRF450R
8. Josh Grant – Kawasaki KX450F
9. Broc Tickle – Suzuki RM-Z-450
10. Cole Seely – Honda CRF450R
11. Chad Reed – Kawasaki KX450F
12. Josh Hill – Yamaha YZ450F
13. Phil Nicoletti – Yamaha YZ450F
14. Jake Weimer – Kawasaki KX450F
15. Nick Wey – Kawasaki KX450F
16. Jimmy Albertson – Yamaha YZ450F
17. Kyle Partridge – Honda CRF450R
18. Mike Alessi – Suzuki RM-Z450
19. Tony Archer – Kawasaki KX450F
20. Davi Millsaps – Kawasaki KX450F
21. Nick Schmidt – Suzuki RM-Z450
22. Weston Peick – Yamaha YZ450F2015 Monster Energy AMA Supercross 450SX Class Season Standings
1. Ryan Dungey, 152 points
2. Ken Roczen, 140
3. Trey Canard, 129
4. Eli Tomac, 114
5. Jason Anderson, 100
6. Cole Seely, 93
7. Blake Baggett, 86
8. Chad Reed, 85
9. Andrew Short, 82
10. Justin Barcia, 71