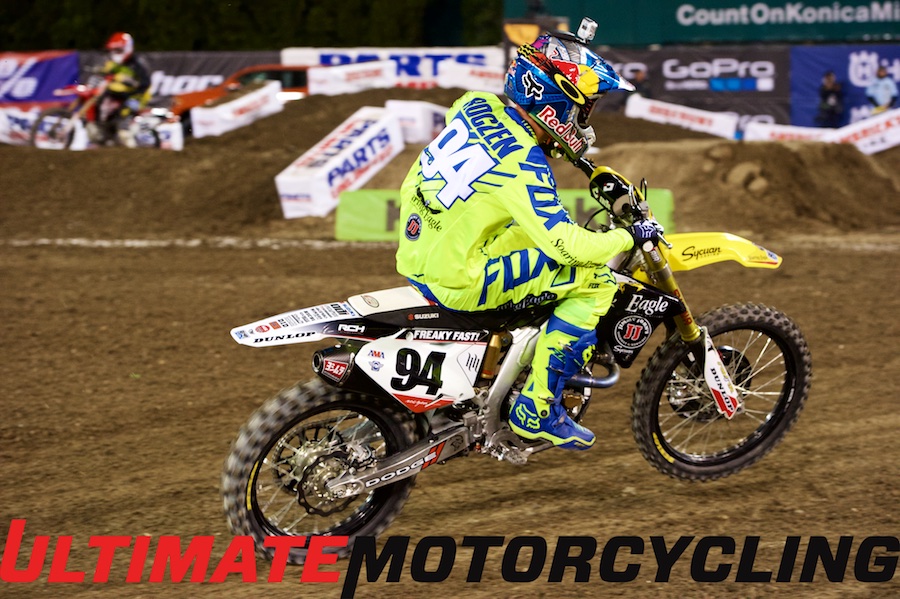 2015 Phoenix Supercross PreviewFollowing an intense season opener in Anaheim, Calif., the 2015 Monster Energy Supercross series heads this weekend to Chase Field in Phoenix.Leading the 450 class is RCH Soaring Eagle/Jimmy John’s Suzuki’s Ken Roczen, who won the opening round just as he did in 2014 while with Red Bull KTM.Besides taking the early 2015 SX points lead, Roczen – the 2014 AMA Motocross Champion – also awarded the RCH team its first win in the 450 SX class. This was a huge progressive step for the team co-owned by 15-time AMA Champion Ricky Carmichael and Freestyle Motocross pioneer Carey Hart.Roczen took the lead on lap one, passing holeshot winner Mike Alessi (Smartop Motoconcepts Racing Suzuki) and Andrew Short (BTO Racing KTM). Roczen continued to lead the remaining 19 laps aboard his RM-Z450, taking victory ahead of Rockstar Energy Husqvarna’s Jason Anderson and Team Honda’s Trey Canard.“Everything has been awesome with the team and it’s good to get the first win out of the way, both for myself and for them,” said Roczen. “There are a lot of good guys out there so I’ll need to stay consistent (this season). It’s good to come out of here healthy and we’ll just keep the ball rolling.”If Roczen wins at Phoenix, he would become the first Suzuki rider to ever win the opening two Supercross races.Anderson’s performance was impressive, and he gave Husqvarna its first podium since 1976. During the race, the man who replaced four-time Supercross Champion Ryan Villopoto on the Monster Energy Kawasaki, Davi Milksops, crashed twice. Millsaps, who won the Monster Energy Cup, wasn’t the only season favorite to crash; GEICO Honda’s Eli Tomac also hit the dirt. Millsaps and Tomac finished 18th and 19th, respectively.Due to Villopoto moving to MXGP and James Stewart under suspension, only two past champions are competing in 2015 Supercross – Red Bull KTM’s Ryan Dungey and TwoTwo Motorsports Kawasaki’s Chad Reed. At Anaheim 1 Supercross, Dungey just missed the podium, and Reed finished 10th.But Phoenix is a special place for Dungey, considering he earned his first 450SX-class win there, which was also the first-ever win for KTM. And besides James Stewart, he is the only rider to win at Phoenix in both classes.In the Western Regional 250SX Class, Troy Lee Designs/Lucas Oil KTM’s Jessy Nelson enters Phoenix with the points lead. Nelson, who had never made a podium appearance, won the first Main Event of 2015 at Anaheim.During last year’s 450SX Class Main Event in Phoenix, Monster Energy Kawasaki’s Ryan Villopoto scored the first win of the season and his first-ever win in Phoenix. In the 250SX Class, Anderson won his second consecutive race of the season.2015 Phoenix Supercross on TVFox Sports 1 will air Phoenix Supercross at 9 p.m. ET Saturday, Jan. 10. Live coverage from Phoenix will also be available on the authenticated FOX Sports Go app. Past Supercross Winners in Phoenix450SX ClassPhotography by Don Williams