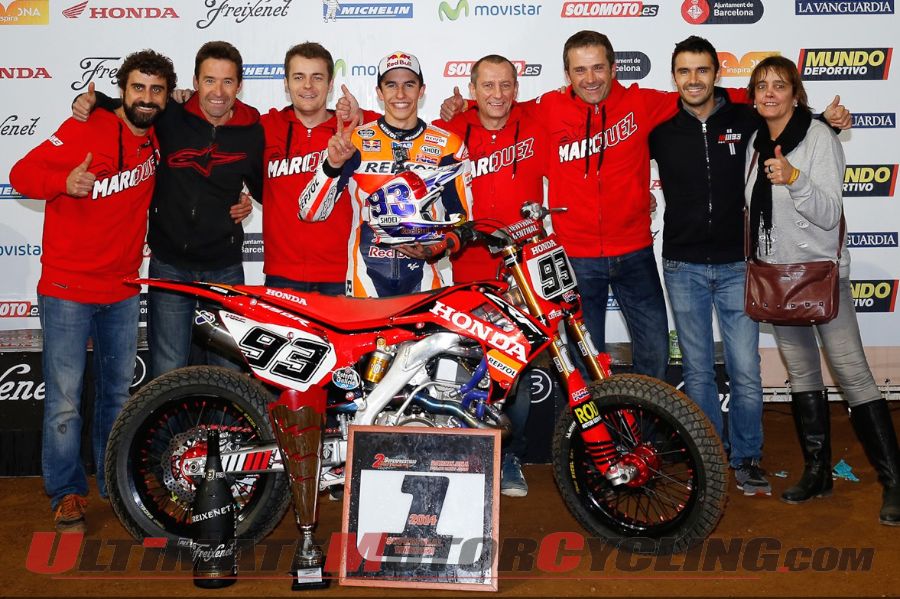 2014 SuperprestigioThe world was able to witness the excitement of flat track racing on Saturday, and it was able to see reigning AMA Pro Flat Track Grand National Champion Jared Mees come up just short in a thrilling battle with Spanish road racing superstar and two-time defending MotoGP champion Marc Marquez.Barcelona, Spain played host to the Superprestigio short track exhibition race, featuring some of the best riders from nearly every form of motorcycle racing in the world, including an American contingent representing AMA Pro Flat Track, the world’s preeminent flat track racing series.Marquez held off a hard charge from Mees in the showcase’s main event, the Superfinal. Mees settled for second in the race, which was broadcast around the world.“I had an amazing time, it was my first time in Spain,” Mees said. “I can’t say enough for everybody that invited me, Marc Marquez and everybody that put the event on. It was amazing, I had a lot of fun. … I hope I can come back next year.”Mees dominated both heat races and all three finals to win his Open class. But in the Superfinal, Mees got caught up behind a downed rider in the first corner and nearly stalled his bike while running wide to avoid the crash. He was in the middle of the pack for the first time all night and one spot in back of Marquez.Methodically and impressively, the two picked off riders before they found themselves in front. Mees drew even with Marquez’s back tire by the final lap, but ran out of time before being able to make a move for the lead. He settled for a hard-fought and well-deserved second.”Marquez is a large supporter and fan of flat track racing, and uses it, like many top road racers, to train. In January, the 2013 AMA Pro Flat Track Grand National Champion, Brad Baker, won the Superprestigio after a thrilling battle with Marquez. This time around, the practice Marquez put in specifically in hopes of winning the Superprestigio really showed.“He kept his wheels in line very well,” Mees said. “Keeping the wheels in line is the faster way to go around the race track, so hat’s off to him. He definitely had amazing style for being a road racer (primarily).”Baker suffered a shoulder injury in practice on Saturday morning and was unable to compete. Leading up to the event, he had been the fastest rider in practice.“First and foremost, I would like to say thanks to Jared. He came from America to here, and also Brad,” Marquez said. “I was worried for (Brad) because the crash this morning was scary.”AMA Pro Flat Track’s Shayna Texter, the only female rider in the event, crashed in her first heat race and found herself in unlucky spots on the track during later heats. She eventually bounced back and finished fourth in her Last Chance Qualifier.Fellow American and 2014 FIM CEV SBK International Superbike champion Kenny Noyes was third in the Superfinal. All three riders on the podium are current champions in their respective series.Additional AMA Pro Flat Track flare was provided by flagger Kevin Clark, who was invited to return for a second time to the event.The thrilling exhibition stoked plenty of interest in the sport, and fans only have to wait until March 12-13 for the 2015 AMA Pro Flat Track season to get underway with a doubleheader at DAYTONA Flat Track. Like the Superprestigio, every AMA Pro Flat Track race in 2015 can be seen live at FansChoice.tv.