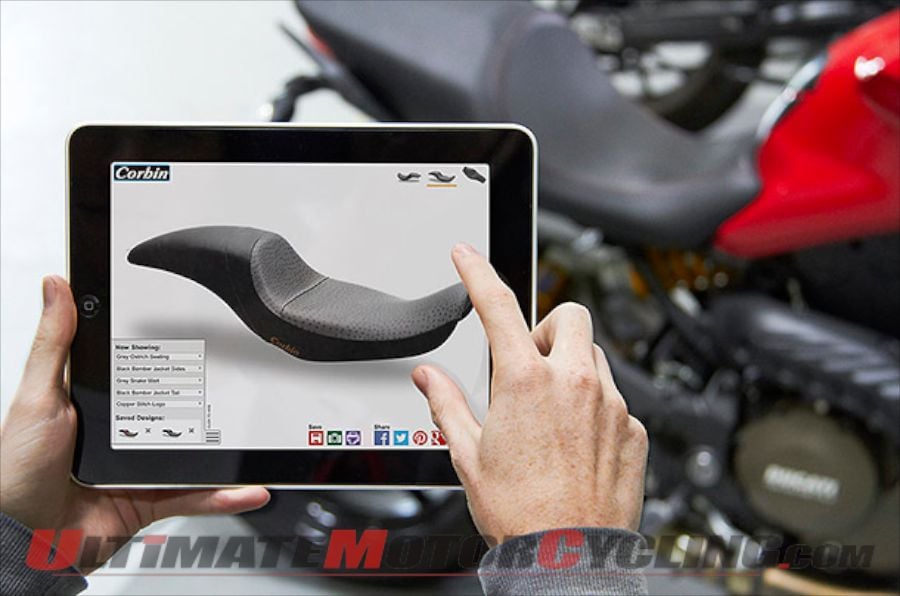 Corbin Custom Seat ToolThe popular designer of custom motorcycle seats, Corbin, is putting the finishing touches on something entirely new – an online custom seat designing tool.The tool, called the “Visual Configurator,” will allow customers to choose the one of the Corbin seat models available, and customize it. Customers choose color and material options, along with color of stitching and embroidered logo.“This has been at the top of our To-Do List for nearly a decade now,” said Greg Hurley, Director of Marketing at Corbin for over 20 years. “It has also been a highly requested feature from our customers as a means of visualizing their custom seat before ordering. Unfortunately the technology to do this properly has been beyond our reach… until now”“Hurley jumped on this project many years ago and has devoted a majority of his incredible IT experience to this project and I’m very proud to have him on board with us” stated Mike Corbin, president and founder of Corbin.The Corbin seat line is very complex as even the simplest seat model has over 43 thousand possible material combinations. A more complex seat like the Dual Touring Saddle has potential custom combinations that number hundreds of millions. Clearly this couldn’t be built photographically, so other options were considered and tested.“We knew basically what we wanted and had a concept of how it should work, but getting it done was a task. We were pretty close a couple of years ago with an Adobe Flash application, but then Apple released the iPad that doesn’t support Flash and that changed the story for everyone,”Hurley says.“Because of the device’s popularity, we had to ditch our existing Flash development and start completely from scratch… but first we had to rebuild our entire website for the same reason.”Fast forward two years and roughly 1,500 manually recreated web pages later and the Corbin crew was back on task of creating the ultimate custom seat tool. The first step was finding the best technology to support their vision and if the job couldn’t be done in-house, then to find the right development partner.The answer was Digital Draping which not only describes the process of creating the elusive seat configurator, but is also the name of the company that saved the day.Based in New Zealand, the Digital Draping crew specializes in web delivery of highly interactive content that enables user customization. The Draping process (also referred to as Texture Mapping), takes photographs supplied by the Corbin seat gurus and lets the user define every aspect of the seat and builds a photo realistic rendering on the fly. Just like the actual seat itself, there are virtually no design limits and millions of potential combinations.Corbin’s Visual Configurator currently features six of their most popular seat designs with more models in process. Once you’ve chosen the seat model, you can choose from Corbin’s vast range of color and material options in every component of the seat.You can even choose the color of the stitching and the embroidered logo. The design can then be shared with your friends, saved, printed or sent off to Corbin for creation. It should also be noted that Corbin has never charged extra for custom colors.Although it is still in development, Corbin and Digital Draping are going to open the configuration tool for world-wide beta testing on November 26, 2014. To take it for a test drive, just head over to the seat maker’s website at www.Corbin.com any time after November 26.