Home Motorcycle Types Motocross / Off-Road 2014 Monster Energy World Speedway Invitational | Rider List
Facebook
Twitter
Linkedin
Pinterest
Email
Print
WhatsApp
ReddIt
16 Riders Confirmed for 2014 World Speedway InvitationalThe lineup is set for some of the fastest speedway competitors in the states and Europe for the second Monster Energy Speedway Invitation, which takes place Dec. 28 at the Grand Arena in the City of Industry, Calif.The 16-rider lineup, featuring nine Americans, a trio of Brits, and a pair Polish riders, as well as lone stars from Australia and Denmark, are set for the 23-heat GP race format. Two additional U.S. alternates are also ready if needed.The official score sheet shows the unique and exciting GP format that features 20 initial four-lap heats from which riders will accumulate points in an effort to become one of the top eight competitors to reach one of the two semi finals. The top two finishers from each semi move on to the final, which will determine the overall winner of the Monster Energy World Speedway Invitational.The draw sets the program for the World Speedway race, determining which events a rider will compete in during the night. (The draw order is listed below; click image to expand).The racing is sure to be exciting throughout the night as the Australian Ward will go bar-to-bar against last year’s winner Janniro as well as two former World Champions, Hamill, and Hancock. Three former U21 FIM World Champions will compete as Janowski and Dudek join Ward in making the trip to the U.S. Additionally, several of the sport’s brightest young stars from both the U.S. and overseas will have the opportunity to show their talents on a premier international stage.Following is the list of riders:1. Tyson Burmeister — United States
2. Ryan Fisher – United States
3. Edward Kennett – Great Britain
4. Ricky Wells – United States
5. Gino Manzares – United States
6. Max Ruml – United States
7. Scott Nicholls – Great Britain
8. Chris Harris – Great Britain
9. Billy Hamill – United States
10. Darcy Ward – Australia
11. Charlie Venegas – United States
12. Patryk Dudek — Poland
13. Hans Andersen — Denmark
14. Maciej Janowski – Poland
15. Greg Hancock – United States
16. Billy Janniro – United States
(1st Reserve) Jason Ramirez – United States
(2nd Reserve) Austin Novratil – United StatesMonster Energy World Speedway Invitational tickets are available for purchase at IndustryRacing.com from now through December 26. Tickets are priced at $25 and $15 for Juniors and Seniors. Tickets purchased at the box office in advance will be an additional $5 and tickets purchased the day of the event will be an additional $10. All kids under 12 are free with adult admission. Grand Arena Parking is $10; remote parking will be $5 and motorcycle parking free of charge. The event will run rain or shine as The Grand Arena has a roof. The box office will open at 3:00 pm on Saturday, December 28.For additional information on FIM Speedway Grand Prix season, log onto www.SpeedwayGP.com. 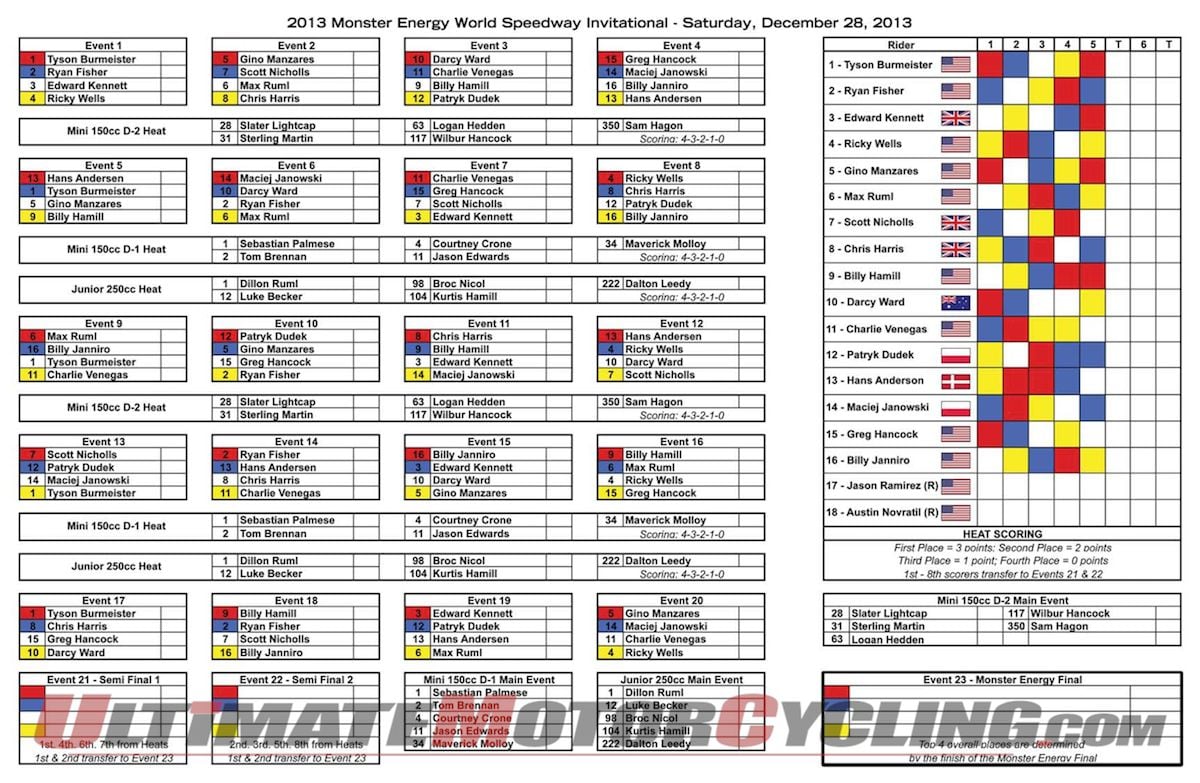