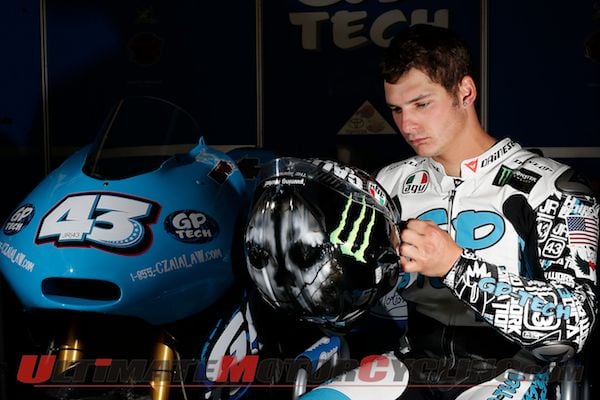 Rispoli AGV Call of Duty Helmet Designed by Troy Lee (Video)Two-time AMA SuperSport Champion James Rispoli unveiled his “Call of Duty: GHOSTS” themed helmet on the eve of his Aug. 17th Moto2 racing debut at the famed Indianapolis Motor Speedway.Rispoli, from Ormond Beach, Fla., primarily races in the domestic AMA Pro Racing championship for the National Guard/Celtic Racing Daytona Sportbike team, but was in Indianapolis this weekend aboard the GP Tech “wildcard” entry in the ultra-competitive international Moto2 category.As the sole American representative in a Moto2 field of 33 riders, Rispoli wanted to mark his GP debut with a special racing helmet worthy of the occasion. As an avid gamer who works closely with the Army National Guard James decided to combine the two interests with his paint-scheme based on imagery from the upcoming November 5th release of Call of Duty: GHOSTS. “GHOSTS” is the latest entry in the massively popular Call of Duty franchise which is regarded as one of the top entertainment properties in the world.Upon reaching out to the Call of Duty team and getting their blessing on the project (along with a hearty “good luck!”) James got together with the legendary Troy Lee Designs to begin the creative process.Together Troy Lee and James came up with a scheme which focused on the striking skull graphic perched on the top of his AGV Pista helmet, sure to make an impression at 170mph coming down the front straight. Also featured is a military combat style US flag, the official Call of Duty: GHOSTS logo and a few personal gaming touches from James. Playing mainly on the XBOX platform James had his gamertag “The Rocket7146” painted on the back along with the gaming lingo “pwning n00bz” in a nod to the rabid 40 million strong Call of Duty player base.The design and painting process was documented by Troy Lee Designs and available for viewing in the video attached below.James Rispoli says: “It’s an honor to be not only representing the United States in the Indianapolis Grand Prix but also tying in one of the biggest names gaming. I love getting with the boys online and unwinding with some Call of Duty and can’t wait for the new game to drop. The Troy Lee guys did an amazing job and I can’t wait to get out there tomorrow in the race and give it my all.”During his Moto2 debut at Indy aboard the GP Tech Misral 610 machine, Rispoli finished 25th.[jwplayer player=”1″ mediaid=”149593″]