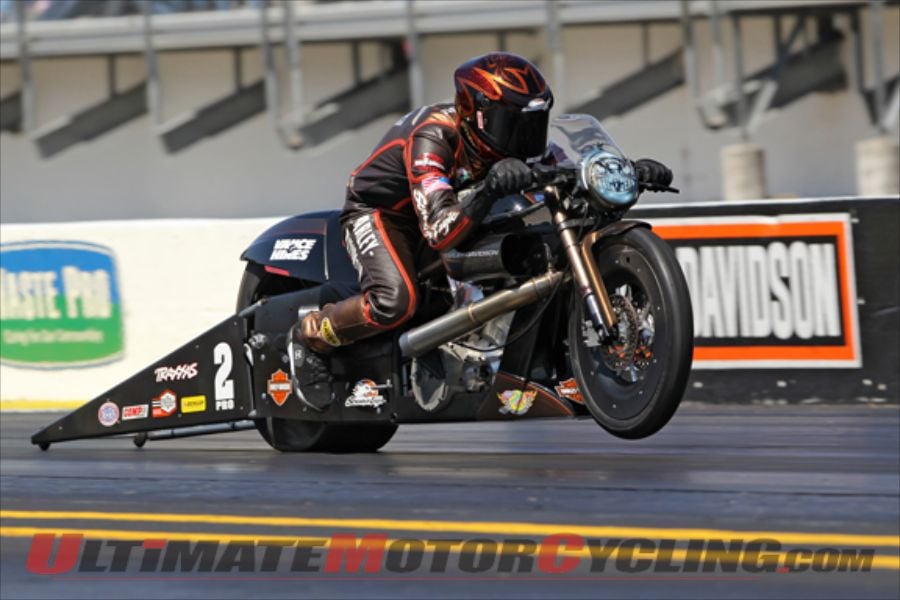 2013 NHRA Pro Motorcycle NewsThe Harley-Davidson Screamin’ Eagle/Vance & Hines drag racing team successfully debuted its new Harley-Davidson V-Rod motorcycles at the 44th annual Amalie Oil NHRA Gatornationals at Auto-Plus Raceway.Aboard V-Rod motorcycles painted to celebrate the Harley-Davidson 110th Anniversary, riders Ed Krawiec and Andrew Hines qualified for Pro Stock Motorcycle eliminations, and each rider won in the first round on Sunday.The Gatornationals was the first Pro Stock Motorcycle event of the 2013 NHRA Mello Yello Drag Racing Series, and the first to run under new rules that forced the defending champion Screamin’ Eagle/Vance & Hines team to design and build a new two-valve pushrod engine and alter its Screamin’ Eagle V-Rod motorcycles, a project that was completed just days before the season-opening event at Gainesville.Matt Hines (Screamin’Eagle/Vance & Hines Crew Chief) says: “We were not here to qualify number one, we were just here to race. When we left the shop I really didn’t know if these bikes would make it down the track without melting down. We ran the new motors on the dyno and we were down on power compared to last year, and the question was would we have enough power to compete. But we ran in the sixes right away in testing at Valdosta, and both riders qualified at Gainesville and got a round under their belts. All things considered, it could not have gone more smoothly. We are not that far behind.”Hines qualified fifth with a best Elapsed Time (ET) of 6.836 seconds. Krawiec, the defending Pro Stock Motorcycle champion, qualified his Harley-Davidson V-Rod in 10th position at 6.882 seconds. Viper Motorcycle Company Buell rider Matt Smith topped the quickest Pro Stock Motorcycle field in history with an ET of 6.804 seconds.On Sunday, Hines defeated Adam Arana on the ProtectTheHarvest.com/MAVtv Buell in round one, and lost to Suzuki rider Steve Johnson in round two. Krawiec advanced in the first round after Vroom/MBT/LAT Racing Oil Buell rider Mike Berry left the starting line early. In round two Krawiec lost to Lucas Oil Buell rider Hector Arana Jr. Arana Jr. defeated Johnson in the final round to win the event. 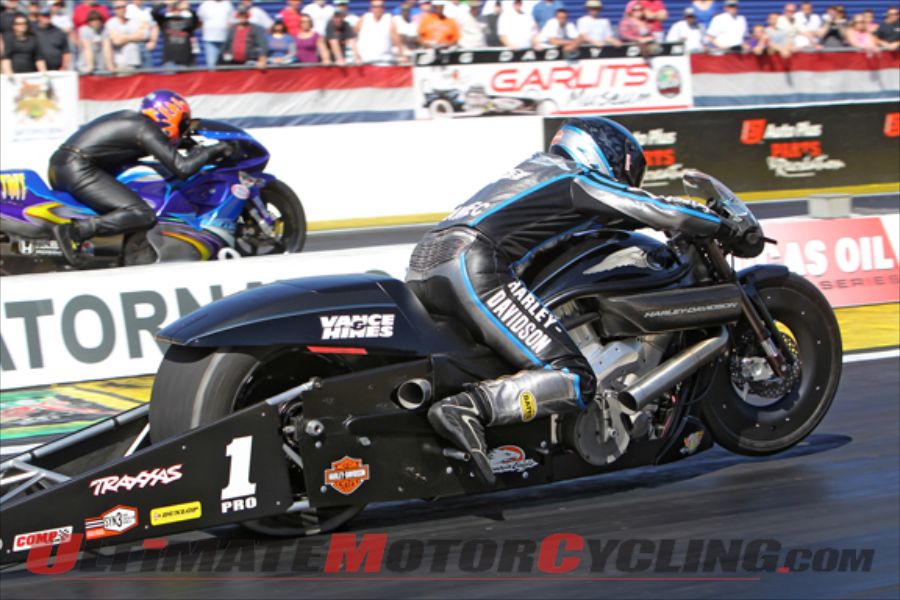 Ed Krawiec says: “Our only goal for this weekend was to qualify and not break anything. We achieved both those goals and got some good data, and for both our V-Rod motorcycles to qualify in the top 10 of a record-fast field is outstanding. These motorcycles show a lot of promise.”The NHRA awarded its Gainesville “Best Engineered” honor to the Screamin’ Eagle V-Rod raced by Hines.Matt Hines says: “It’s a tribute to all of the time and dedication [invested] during the off-season by the team. I think the new engine responded better than we expected. I had the low 60-foot time in four of my six runs, which has never happened before, so I think that shows we’ve got a handle on the clutching. I think we’ll go home and dedicate these next four weeks to finding more horsepower. I see no reason why we can’t get back to the performance we had in 2012. My goal is to have these two bikes up front in qualifying by Englishtown, if not sooner.”After one round of Pro Stock Motorcycle competition, Arana Jr. leads the class with 125 points, followed by Johnson with 96, Arana Sr. with 85, and Sovereign-Star Racing Buell rider Scott Pollacheck with 73 points. Hines is in fifth place with 55 points, followed by Viper Motorcycle Company Buell rider John Hall with 54 points and Krawiec in seventh place with 52 points.The Pro Stock Motorcycles will next race at the 4th annual Dollar General NHRA Four-Wide Nationals fueled by Full Throttle, April 19-21 at zMAX Raceway in Concord, N.C.