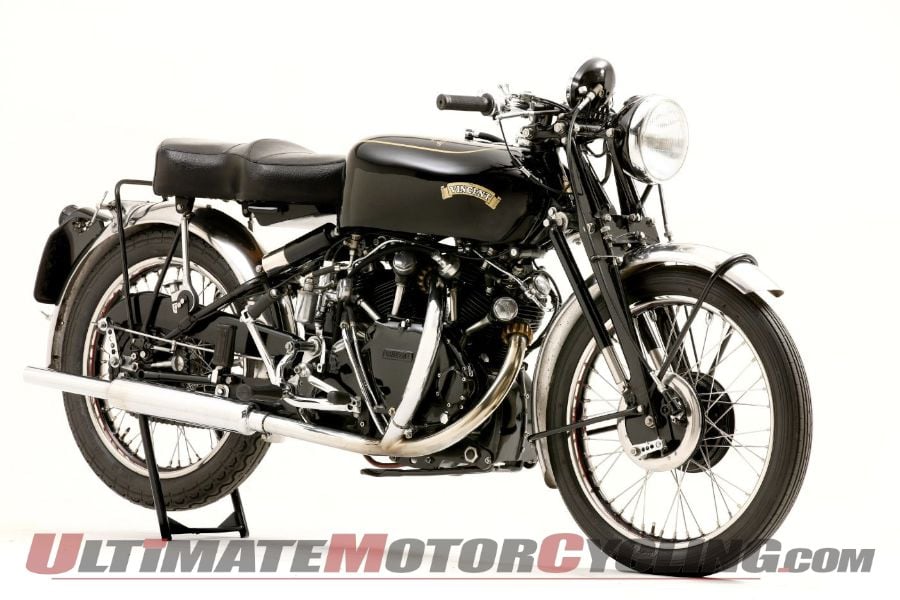 A Vincent Black Shadow motorcycle that formed part of a bid by the factory to set a new 24-hour speed record in 1952 is among £1 million ($1.5 USD) worth of lots already consigned for the annual Bonhams sale at the International Classic MotorCycle Show in Stafford, UK, on Sunday April 28.

Although mechanical failures prevented the bid at Montlhéry in France in May 1952 from being successful, the British team returned home with eight new records, including six hours at over 100mph.

Among other machines consigned to the Bonhams sale of Pioneer, Vintage and Collectors’ Motorcycles and Related Memorabilia are a trio of Brough motorcycles – two from a single owner collection.

A 1931 SS80 that started life as a sidecar outfit with Ipswich Police before being converted to solo trim and raffled off to raise money for the Brough Superior Club is estimated at upwards of £50,000. Tickets for the 1972 raffle were sold for five pence each, or 50 pence for a book of 10, and second and third prizes respectively were 10 and five gallons of oil. The lucky winner sold the machine to a club member who raced it for several years, before it passed to its current owner in 2004.

A 1926 SS80/100 model estimated to realise between £160,000 and £200,000 is a rare factory variant combining an SS100 frame with the SS80 sidevalve engine. Only a handful of these unusual machines were made, of which very few survive. Re-engined post-World War II with an overhead-valve SS100 unit, it won the ‘Re-build of the Year’ award at the Brough Superior Club’s Annual Rally in 2012.

The Brough family is also represented by the 1921 Brough Model G. This rare motorcycle was manufactured by George Brough’s father William, whose company was in existence from 1902 to 1925. Offered for restoration, it is estimated to realise between £20,000 and £30,000.

Other British motorcycles of note include a rare factory-restored 1957 Ariel Square Four 4G Mk2 (estimate £12,000 – £14,000). Britain’s major motorcycle manufacturers did not routinely offer a restoration service to their customers, preferring to delegate such tasks to local agents. This machine’s late owner John Hay, deputy news editor of The Financial Times, bought it in 1962 and succeeded in persuading the factory to restore it for him, despite the fact that the ‘Squariel’ had been out of production for three years. The machine remained with him until his death, passing to the current owner in 2011.

Ben Walker (Head of the Bonhams Motorcycle Department) says: “We are very much looking forward to the first UK sale of the year at the International Classic MotorCycle Show. It has been an excellent start to 2013 for the department, which recorded its most successful sale in Las Vegas in January and more than doubled its previous sale total in Paris earlier this month.

“We hope to continue this run of success at the first of our two annual sales in Stafford. We are delighted to be able to offer such a wide and eclectic range of important motorcycles at what has traditionally been a very successful sale.”