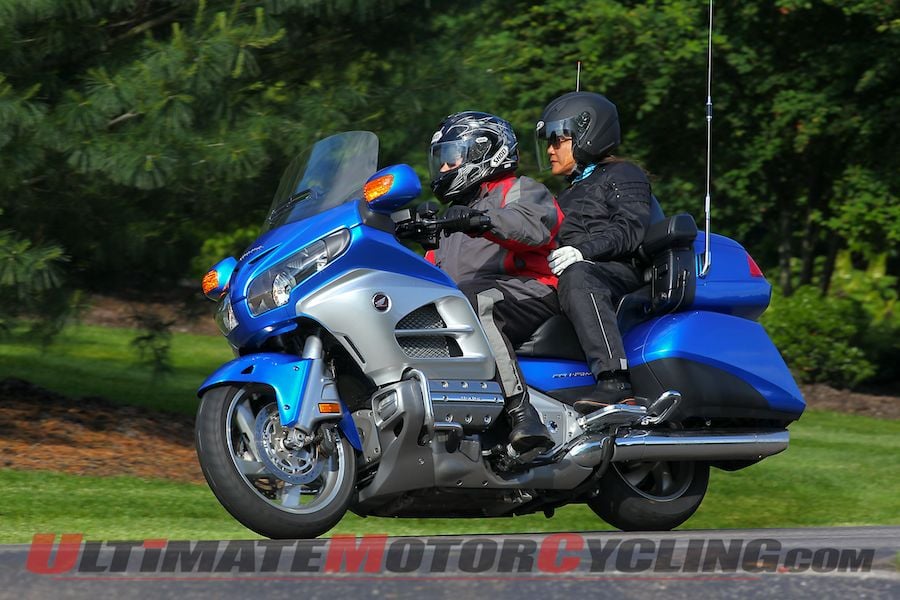 2013 Honda Gold Wing TestBoasting nearly four decades of evolution, the Honda Gold Wing is as near to perfection as a touring motorcycle can get. Fully dressed out and ready to take on a ride of any distance, the Gold Wing is truly luxury defined.Essential for any serious touring bike is the ability to haul around two riders and enough luggage to keep the everyone satisfied for months on end.The magic of the liquid-cooled horizontally opposed six-cylinder powerplant is undeniable. It may have only two valves per cylinder and single overhead cams, but when you are packing 1832cc, that becomes immaterial. From idle to redline, the power is seamless, constantly building, and impeccably controllable.In fact, controllability may be the secret to the success of the Gold Wing. Tipping the scales at over 900 pounds before a rider mounts, or even a wallet is slipped into one of the many cubbyholes, the Gold Wing is one of the easiest motorcycles on the market to handle.The Gold Wing may appear to be an unmanageable behemoth, but Honda has balanced the bike like a fine scale, and kept the center of gravity impossibly low. Add in surprisingly compact ergonomics, and you have a motorcycle that is well within reach of the masses. Certainly, many Gold Wing riders are seasoned riders, yet they can handle the bike on a daily basis, with a passenger, on coast-to-coast rides with ease.Well seated in the 21st century, the Gold Wing has a stunning array of electronic advancements to improve the rider experience. One of the latest features is the optional Next-Generation Honda Satellite Linked Navigation System. Not just a GPS with a bright full-color screen, the system incorporates XM Radio, XM NavTraffic and XM NavWeather, all of which make for a more enjoyable, and safer, ride. Another option that boggles the mind is an airbag in front of the rider, which is triggered by one of two crash sensors on the forks.All of this comes with incredibly comfortable seats, and handling that allows a rider to make time when trying to beat inclement weather or get home before the sun goes down. Undeniably, the Honda Gold Wing is a benchmark touring bike.