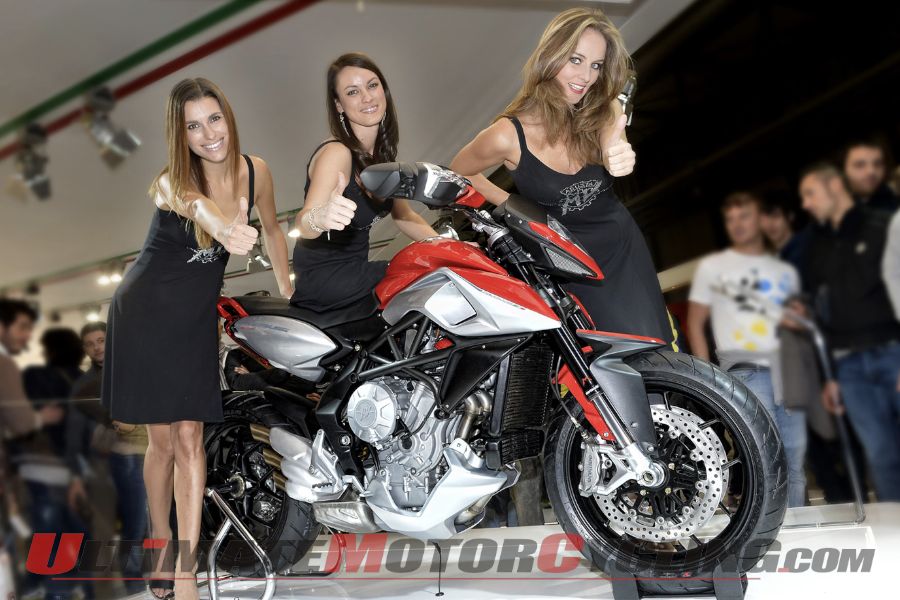 2012 Most Beautiful Motorcycle of the ShowEvery year at the International Motorcycle Show (EICMA) in Milan, one debut model receives the title of “Most Beautiful Bike” by spectators.And at the 70th edition of EICMA last week, the all-new MV Agusta Rivale 800 won the “Moto più bella del salone,” Italian for “most beautiful bike of the show.”The competition, organized by Italy’s largest monthly motorcycling publication “Motociclismo” saw the MV Agusta Rivale 800 maintain a commanding position throughout the entire week of the fair: the three-cylinder made in Schiranna totaled 35.5% of the votes expressed by over 15,000 show attendees.The majority was astounding over its nearest competitors the Ducati Hypermotard SP (22.9%) and BMW R 1200 GS (15.5%). The latest MV Agusta, a true work of art, literally amazed the audience at the show dedicated to two wheels.The award ceremony was held yesterday, the final day of EICMA 2012, at the booth of Motociclismo, with Giovanni Castiglioni, President & CEO of MV Agusta, and Piero Bacchetti, President of Editorial Edisport.The Rivale 800, in it’s first appearance, has already captured the imagination of motorcyclists around the world. With this model, MV Agusta has revolutionized a market segment, employing original technical concepts combined with styling that respects MV Agusta’s heritage whilst exceeding new aesthetic parameters and performance. Weight, power and electronics come together in a unique and perfect package redefining the concept of an extreme motard, and making it the absolute benchmark within its class.Giovanni Castiglioni (President & CEO of MV Agusta) says: “For us it is a further recognition and confirmation of how much energy and resources MV Agusta is dedicating to the constant development of new products. After winning in 2010 with the unique jewel created by my father, the F3 675, it is an incredible satisfaction to win yet again with a completely new machine. This victory is the greatest gift we could give to our President.”