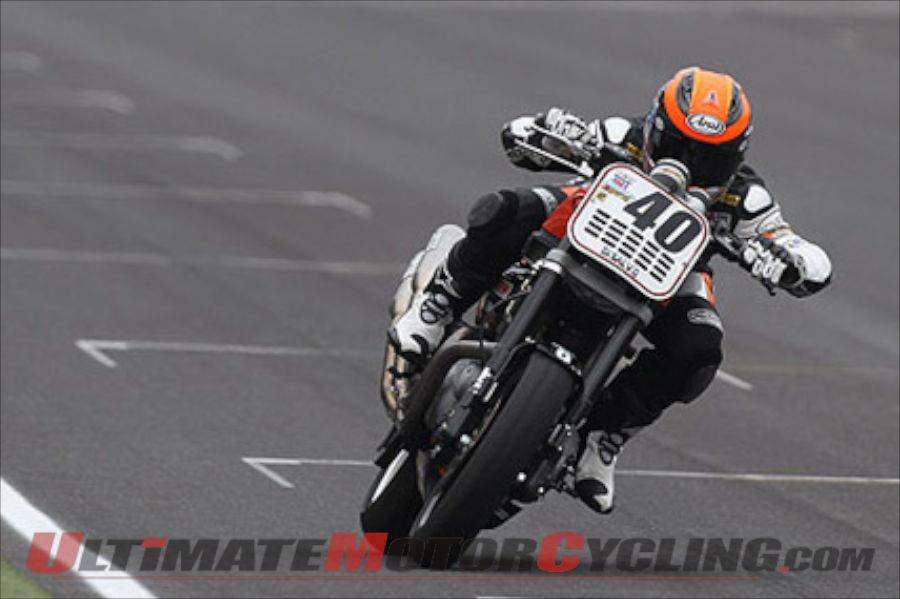 2011 Harley XR1200After two days of testing at the famed Indianapolis Motor Speedway, AMA Pro’s Vance & Hines XR1200 riders are ready to go at this weekend’s Red Bull Indy GP, August 27-28.The AMA Pro test marked the first time Harley-Davidsons have run at the Brickyard since 1909, bringing two American classics together after more than 100 years.AMA Pro Daytona SportBike rider Jason DiSalvo, who made his XR1200 debut today with Team Latus Motors Harley-Davidson, declared himself one serious class rookie by notching the quickest time ahead of series regular and championship contender Steve Rapp (Parts Unlimited). DiSalvo ran a 1:58.342 to Rapp’s 1:58.597, the duo comprising the only two riders able to crack the 58-second range today. Tyler O’Hara, running under his own banner, was third quickest.

Jason DiSalvo says: “The track seemed to come in really well there toward the end of the day. For the race, this track is just going to get better and better. We’ve been working on some stuff with the tires, but the spec Dunlop tires we run are lasting pretty good and it’s only going to get better. I love riding the XR1200.“I’m actually riding my teammate, Chase McFarland’s, backup bike and I haven’t changed one thing – spring rates, anything – from the time I got on it. All in all it’s been really good. It’s a blast to ride, and fun. It’s going to be a great show for the fans out here and I can’t wait to see thirty-plus Harley-Davidson XR1200s line up in front of a packed house here at the Indianapolis Motor Speedway.”Championship points-leader Chris Fillmore ran a limited number of laps today but declared himself fit to protect his overall lead.Chris Fillmore says: “We’re ready to go, and I wanted to rest my shoulder a little. It’s been a good couple of days and we feel pretty good about this race. After that, we’ll look forward to the final race at New Jersey, where I’ll also be riding my KTM AMA Pro SuperBike.”Michael Beck says: “This is a great facility. It’s my first time [riding] here; I came here to see MotoGP a couple of years ago as a spectator, but I always wanted to ride across those bricks, and to actually get to do it is a great experience. The surface is super-flat and super-smooth — it’s a great place to ride. It is a little slick, but with it being so fresh and so new we just haven’t done enough laps around here yet. We’re getting prepared for next weekend with our XR1200, and I’m looking forward to it.”A total of twenty-two Harley-Davidson XR1200s tested at the Speedway, and a number of additional riders are slated to be join them for the inaugural AMA Pro Vance & Hines XR1200 double-header during the MotoGP weekend, pushing the number of expected entries to more than thirty.Vance & Hines’ Terry Vance reflected on the significance of the upcoming races, saying, “It’s a great thing to see the class out here and the number of bikes we’re going to have on the grid for the MotoGP weekend. I’m just really happy everybody has come together with Harley-Davidson, Vance & Hines, and AMA Pro to make all this happen, culminating in the upcoming event. We only started this class a year and a half ago, and we have thirty-three guys entered for this race, so we’re doing really good. There aren’t too many young racing series in the United States that are actually growing, and to look at the Harley-Davidson class and say it’s made leaps and bounds is an understatement.Terry Vance says: “I never really thought about racing here at Indy, but the opportunity became available this year when Mel Harder from IMS said it was a possibility. David Atlas from AMA Pro got it put together, and we started talking to Harley-Davidson and Vance & Hines and made it a reality. It’s a nice moment for us, and I’m really excited to see the XR1200s on the track.”For complete Timing & Scoring reports from today’s testing, please visit amaproracing.com. For Red Bull Indy GP tickets and information, visit indianapolismotorspeedway.com or call (800) 822-INDY.