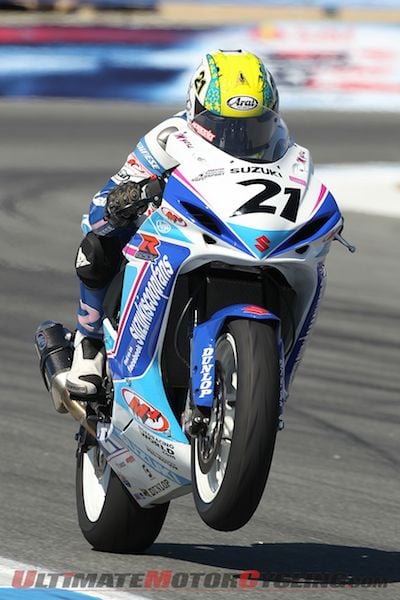 2011 Laguna AMA SuperSportTeam SuzukiScoopFans rider Elena Myers celebrated the end of the AMA Pro SuperSport West Division season with a solid performance at Laguna Seca Raceway in Monterey, Calif., on Saturday.The 17-year-old Californian captured a top-five finish in the race and also finished up in fifth place overall in the West Division.Because the AMA paddock joined the Red Bull U.S. MotoGP at Laguna Seca, there was only one AMA Pro SuperSport race this weekend, as opposed to the usual two.Myers started the weekend strong by qualifying fifth and getting herself a starting position on the second row of the grid. In the 18-lap race, she got a great launch on her SuzukiScoopFans Suzuki GSX-R600 and was in contention for a win or a podium for most of the race. Myers ran as high as second place before finishing fifth.Elena Myers (Suzuki ScoopFans GSX-R600 SuperSport) says: “I started from the second row and got a pretty good start on my SuzukiScoopFans Suzuki GSX-R600. I battled for a podium spot for about three-quarters of the race, but during the last little bit we struggled some. So I dropped back a little bit, but I stayed pretty consistent after that and crossed the line in fifth.”Although Myers has contested the entire AMA Pro SuperSport schedule, she was only officially competing in the West Division. This weekend’s Laguna Seca event was the final round for the West Division and saw Myers finish up in fifth overall, despite missing two rounds early in the season due to injury.Elena Myers says: “Missing two of the races, it was pretty hard to really be a contender in the championship, so I ended up fifth. But next year, I definitely want to go for the championship. Hopefully, I’ll stay healthy and everything will go well.”The 2011 Suzuki ScoopFans team’s next and final event of the 2011 AMA Pro SuperSport season will be at New Jersey Motorsports Park in Millville, N.J., Sept. 2 – 4, 2011.