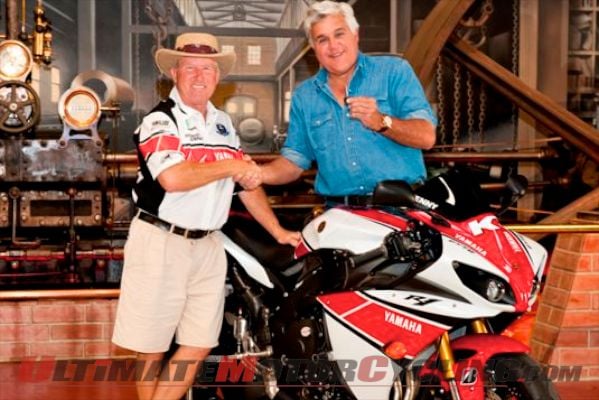 Yamaha 50th Anniversary R1 AuctionMotorcycle enthusiasts around the world will have a special opportunity to bid on a one-of-a-kind YZF-R1 as ridden by "King" Kenny Roberts around the famed Mazda Raceway Laguna Seca circuit, Yamaha Motor Corp. USA, announced Tuesday. This special GYTR-equipped R1 features a unique 50th anniversary Red/White paint scheme and many Genuine Yamaha custom performance accessories.The bike will be sold at no reserve to the highest bidder as part of Mecum’s Motorcycle Auction segment during Pebble Beach weekend, scheduled for Thursday evening, August 18 in Monterey, California. Serving as designated "auctioneers" for this R1 will be none other than Jay Leno, who will also be joined on stage by "King" Kenny himself.Jay Leno (The Tonight Show) says: "The proceeds for this Yamaha R1 will go directly to Bailey’s Café, a fantastic school of the arts for kids in the Bronx. Once the bidding is over, I’m sure that the performance of this R1 will only be matched by that of the kids in this great school!Bob Starr (General Manager of Communications for Yamaha’s Motorsports Group) says: "This auction is another great part of our activities for Yamaha’s 50th Anniversary of World GP Racing. To have both Jay and Kenny involved in such a worthy cause is a great way to celebrate!"For more information on Bailey’s Café please go to baileyscafe.org. For more information on Mecum’s Motorcycle Auction in Monterey go to mecum.com.