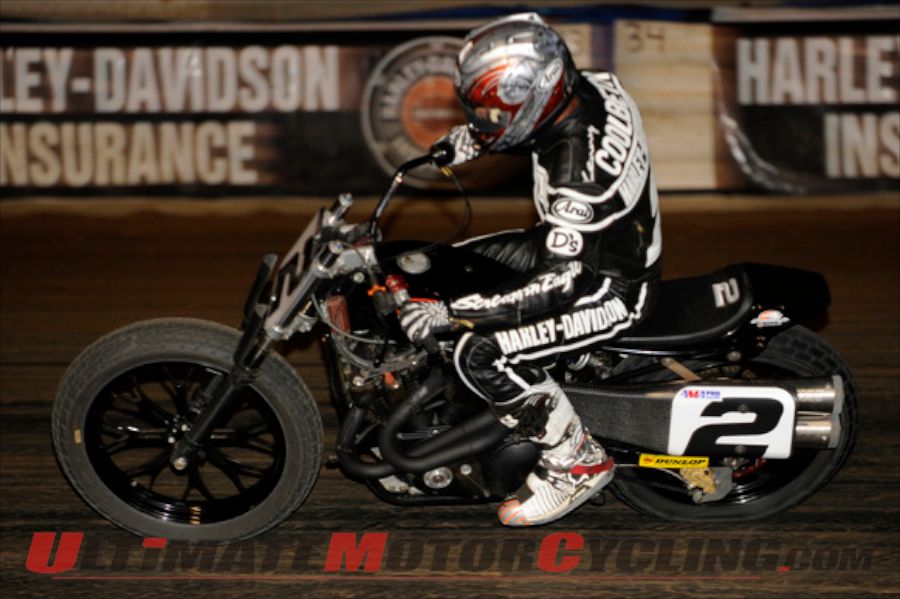 2011 AMA Flat TrackWith a near-capacity crowd looking on, Harley-Davidson Motor Company-backed Kenny Coolbeth captured his third Hub City Classic Grand National win in convincing style, leading every lap of the 25-lap AMA Pro Racing Harley-Davidson Insurance Flat Track Championship main event. Kenny Coolbeth (Harley-Davidson Flat Track) says: "I love racing here," said Coolbeth after the event, "it’s like my hometown track. A lot of my friends and family make the trip down for this race."The former Grand National Champion didn’t disappoint his fans, as he quickly took control of Maryland’s Hagerstown Half-Mile main. Scott’s Powersports’ Johnny Lewis had gotten the holeshot on his Kawasaki, but by Turn 2, Coolbeth had his Harley out front and was pulling away, while a pack made up of fast-qualifier Chris Carr (American Motorcyclist Association/DFW Honda), Jared Mees (Rogers Lake Racing/Blue Springs Harley-Davidson), Bryan Smith (fasthog.com/American Harley-Davidson), and defending Grand National Champion Jake Johnson (Zanotti Racing) gave chase.With Coolbeth in command, Lewis settled into second. Mees and Johnson both managed to get by Carr, and a few laps later, Smith and Goodwin Racing’s Jethro Halbert dropped Carr yet further back – all the way to seventh – and the running order looked set for the finish. On Lap 17, however, the red lights flashed when R&J Racing’s Doug Lawrence fell in Turn 2, turning the conclusion into an eight-lap dash following a single-file restart. Suddenly, the race that had appeared to be a lock for Coolbeth was entirely up for grabs.Coolbeth nailed the restart with Jake Johnson in tow, but just as quickly, the reds flashed again as Chris Carr – who had spun off the start – was clipped by another rider, sending him to the ground in a heavy fall. The second attempt at a restart saw Coolbeth and Johnson once again out front, however, and this time Coolbeth was not to be denied.Johnson was dispatched by Mees, but both riders came under attack from Lewis. Lewis was able to retrieve second on Lap 21, forcing Mees and Johnson to settle for third and fourth, respectively, while Jethro Halbert rode his borrowed Harley into a fifth-place finish over Smith. Matt Weidman (White’s Harley-Davidson), Rob Pearson (American Harley-Davidson), Jimmy Wood (Southland Racing), and Shaun Russell (Monster Energy Kawasaki/Werner Springsteen Racing) rounded out the top ten.Series points-leader Sammy Halbert (Kings Kustoms/Larry Zumbrun Racing) ended up mired in fourteenth position as he struggled with rear tire problems, and his misfortune tightened up the points race considerably, his lead over Johnson having shrunk to 15. Mees sits just a single point behind Johnson in third overall, while Coolbeth — who maxed out on points at Hagerstown, adding points for most-laps-led and the earlier four-lap Dash to his victory — now lurks just ten points back.Weirbach Racing’s Mikey Martin won his first main of 2011 in the sixteen-lap Hagerstown Motorcycle-Superstore.com Pro Singles contest. Pro Singles Dash winner Adam Bushman (Midwest CNC) had grabbed the holeshot, but he couldn’t hold off a hard-charging Martin and Gerit Callies. The Full Throttle-backed Callies was on another Weirbach Racing Honda, giving Dick Weirbach a sweep of the top of the podium, and Bushman took his solid third over fast-qualifier Robbie Treinen (Bob Weirbach Race Team/Trackside Bar) and Scott Powersports’ Jake Shoemaker.Callies has retaken the overall Motorcycle-Superstore.com Pro Singles points lead, but heads Mikey Avila (SDI Insulation/M.E.H. Corp), who finished off the pace in eleventh, by a very slim two points.The AMA Pro Harley-Davidson Insurance Flat Track Championship next heads to Lake Odessa, Michigan, for the Round 11 I-96 Half-Mile. For tickets and information, visit i96speedway.com or call (616) 642-0555. To be a part of the AMA Pro Harley-Davidson Insurance Flat Track Championship, visit us at amaproracing.com and join us on facebook.com/AMAProFlatTrackSeries and twitter.com/AMAProFlatTrack.