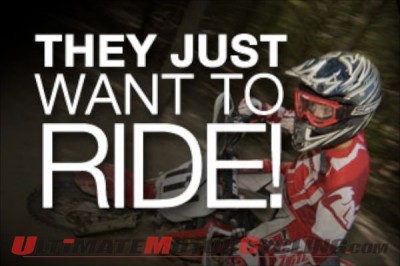 Motorcycle LegislationA bill that would exempt kids’ off-highway vehicles (OHVs) from the law that effectively bans them at the end of the year is gaining support on the eve of a key congressional hearing, the American Motorcyclist Association (AMA) reports.Some 61 U.S. House members now support the bill – H.R. 412, the “Kids Just Want to Ride Act,” introduced by Rep. Denny Rehberg (R-Mont.) – that would exempt kids’ OHVs from the lead-content portion of the Consumer Product Safety Improvement Act (CPSIA) of 2008.Also called the “lead law,” the CPSIA bans the making, importing, distributing or selling of any product intended for children 12 and under that contains more than a specified amount of lead in any accessible part. It also requires that all childrens products undergo periodic testing by independent laboratories approved by the Consumer Product Safety Commission (CPSC), which is responsible for implementing the law.The CPSC has delayed enforcing key portions of the law until after the end of the year. Unless the CPSIA is changed, the sale of kids’ dirtbikes and all-terrain vehicles (ATVs) will effectively be banned.The latest support for the Kids Just Want to Ride Act comes just as the Subcommittee on Commerce, Manufacturing and Trade of the House Energy and Commerce Committee is about to hold a hearing on the CPSIA. The hearing, set for 9 a.m. on Thursday, April 7 in room 2123 of the Rayburn House Office Building, will focus on possible revisions to the CPSIA.The subcommittee hearing will be webcast live on AmericanMotorcyclist.com beginning at 9 a.m. EDT on Thursday, April 7.In related news, the AMA will be conducting an AMA Family Capitol Hill Climb on Thursday, May 26, at the nation’s Capitol in Washington, D.C. The event will promote the future of youth dirtbike and ATV riding, and scores of young riders and their families are expected to attended. The day will begin with a press event introducing the winner of a video contest to focus attention on the plight of children and families impacted by the CPSIA.Following a screening of the winning “Kids Just Want To Ride!” video, all attendees will have the opportunity to meet with their congressional representatives to urge support for the Kids Just Want to Ride Act.For more information about the the Kids Just Want to Ride Act, the AMA Family Capitol Hill Climb and the Kids Just Want To Ride! video contest, go to AmericanMotorcyclist.com.