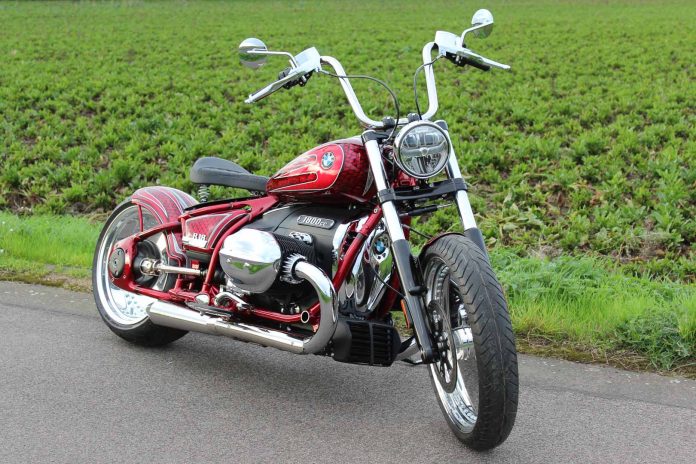 BMW Motorrad’s annual quest to provoke German-built custom versions of their motorcycles continues. BMW picks a group of builders and gives them three months to create something special. The results reflect a broad range of tastes. We’ve picked six of our favorite R 18 builds in the 2022 BMW Motorrad Customizing Contest for your enjoyment.Procar Automobile & Co. KG R 18 Bloody Sunrise 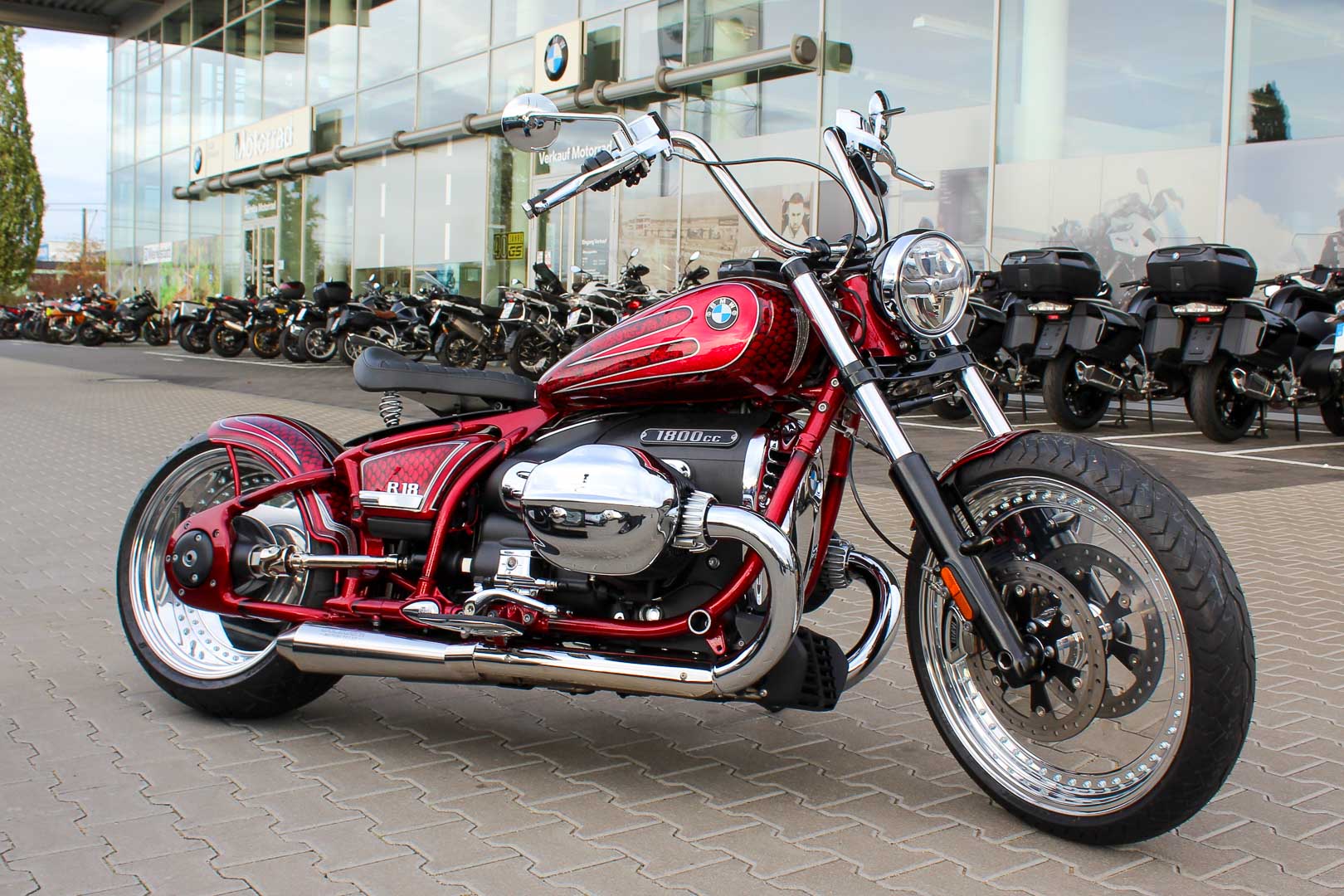 Mechatronics engineer Till Becker at Procar Automobile dipped into the 1970s for inspiration, and the stunning Bloody Sunrise chopper is the unpredictable result. The paint by Big Chief Custom Painting is eyepopping, with its airbrushing and stenciled graphics. Extensive shine provides the needed foil, including the prominent valve covers, polished WalzWerk exhaust, and engine front cover. The coup de grâce is delivered by Rick’s Motorcycles Designräder 3-teilig Disc three-piece polished wheels—21- and 18-inch variety, naturally, with the rear measuring eight inches across. LMC Bikes brought the Hardline 2 rear fender and custom handlebar. The sprung seat is a Wunderlich RockBob saddle. WalzWerk contributed the front fender, while KDF supplied the headlight lowering system and the rear turn indicators are Kellermann units. The tank was modified to allow flush mounting of the speedometer. All told, Procar claims to have 250 hours of labor in Bloody Sunrise—we believe it.Motorbike Guhs e.K. R 18 Steelbody 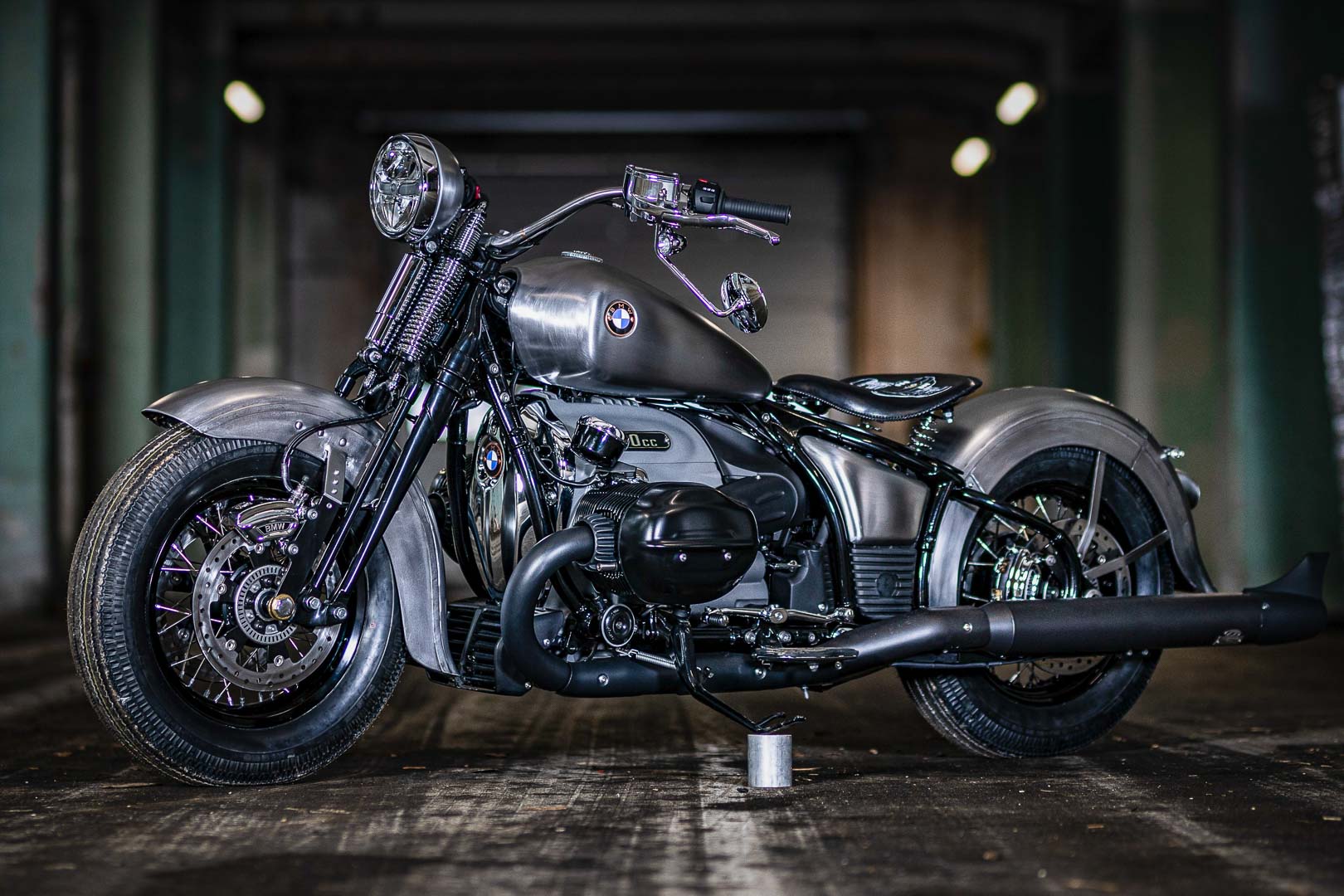 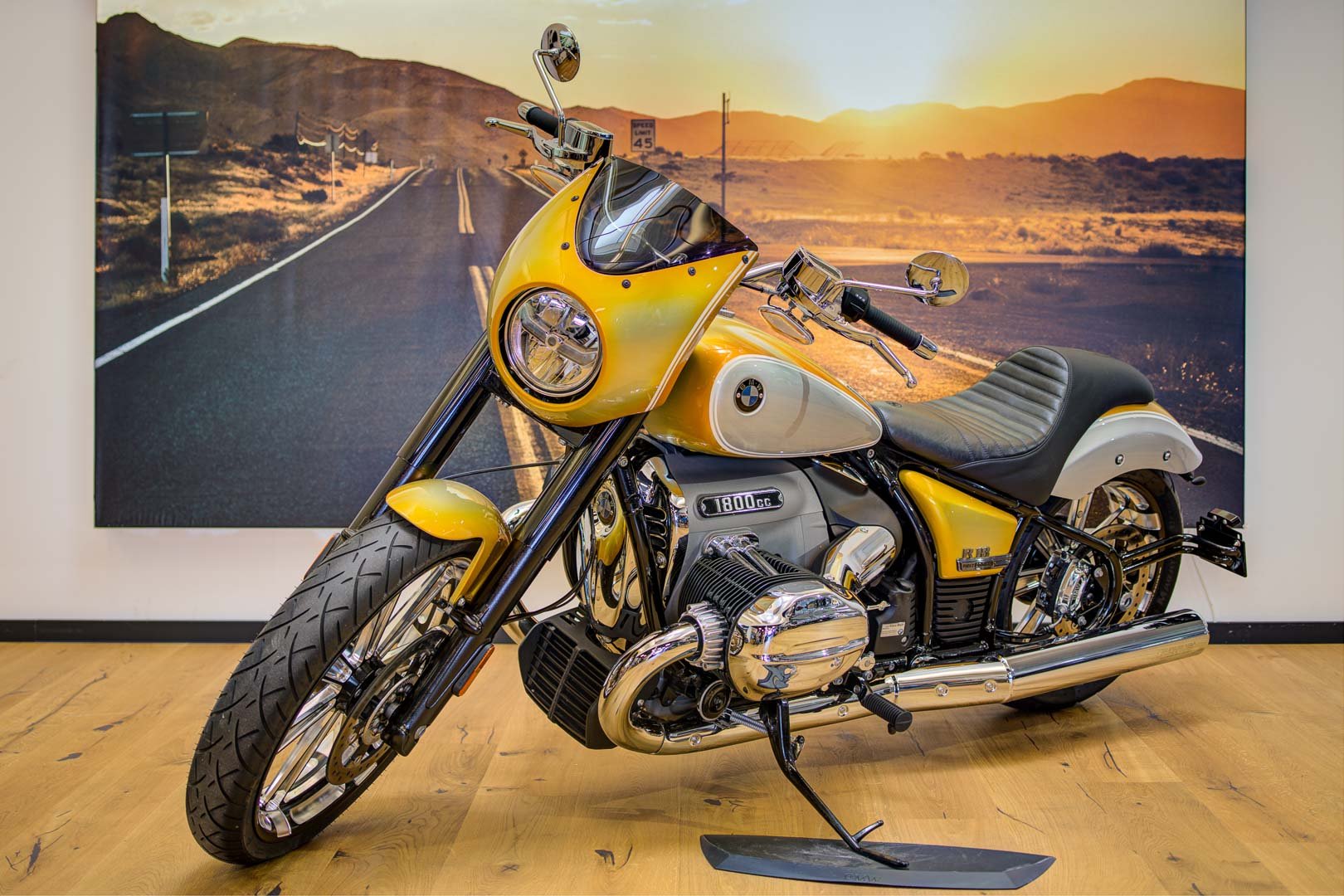 Although Daytona Orange is an iconic color for the BMW R 90 S of the mid-1970s, you don’t expect it to see on a 21st century R 18—yet, that’s what Klaus Mayer and his team did with the KG R 18 Daytona. Performance-oriented motorcyclists will recognize the stainless steel Remus Custom slip-on mufflers with Short Cut chromed aluminum end caps. The Wunderlich Cockpit fairing with a Sport smoke gray windshield offers a bit of wind protection in the front, along with plenty of style. Lest you think this is a track-oriented R 18, the Daytona has a 21-/18-inch BMW Contrast Cut forged aluminum wheelset with Metzeler ME 888 Marathon Ultra rubber. “Despite the customizing appeal, our Daytona should still be reminiscent of the classic R 18 and the origins of  BMW Motorrad,” Mayer explains. “Accordingly, we have not changed the basic line of the design, but individualized it with various accessories and based the paintwork on the R 90 S and the Daytona Orange, which also gave the bike its R 18 Daytona name.” Photography by Bernd LischkeMotorrad Bögel Iron R 18

Since its birth in the 1950s, rock ’n’ roll has revered motorcycles as symbols of cool. With the Motorrad Bögel Iron R 18, the favor is returned, as it bathes in the reflected glory of British heavy metal giants Iron Maiden. This is an extreme build, as you might expect from an Iron Maiden aficionado. Even the paint electrifies your sense—the lightning that runs from the front to rear fender, and you can’t miss the macabre Iron Maiden imagery. There are quite a few features to take in, though let’s start with the Bögel-built exhaust system with fishtail mufflers gaping toward the sky. Other handmade items include the Iron Cross-topped sissy bar far behind the sprung solo saddle and a Z handlebar with Iron Cross mirrors. The 21- and 18-inch rims are wire-spoked, and don’t miss the helmeted grinning skull knob for the hand shifter. The leather side bag seems almost quaint.ahg Eningen R 18 Edition #01 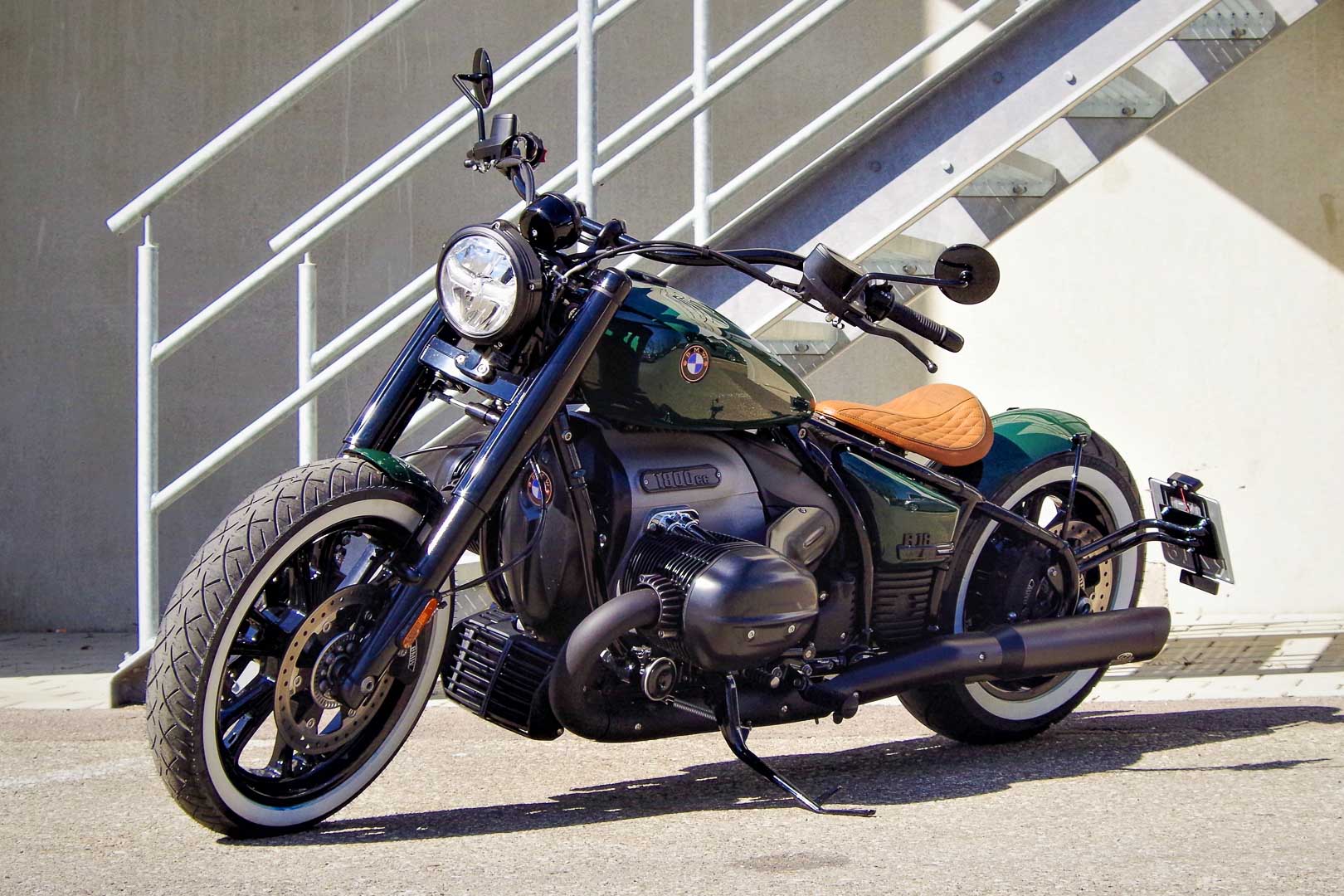 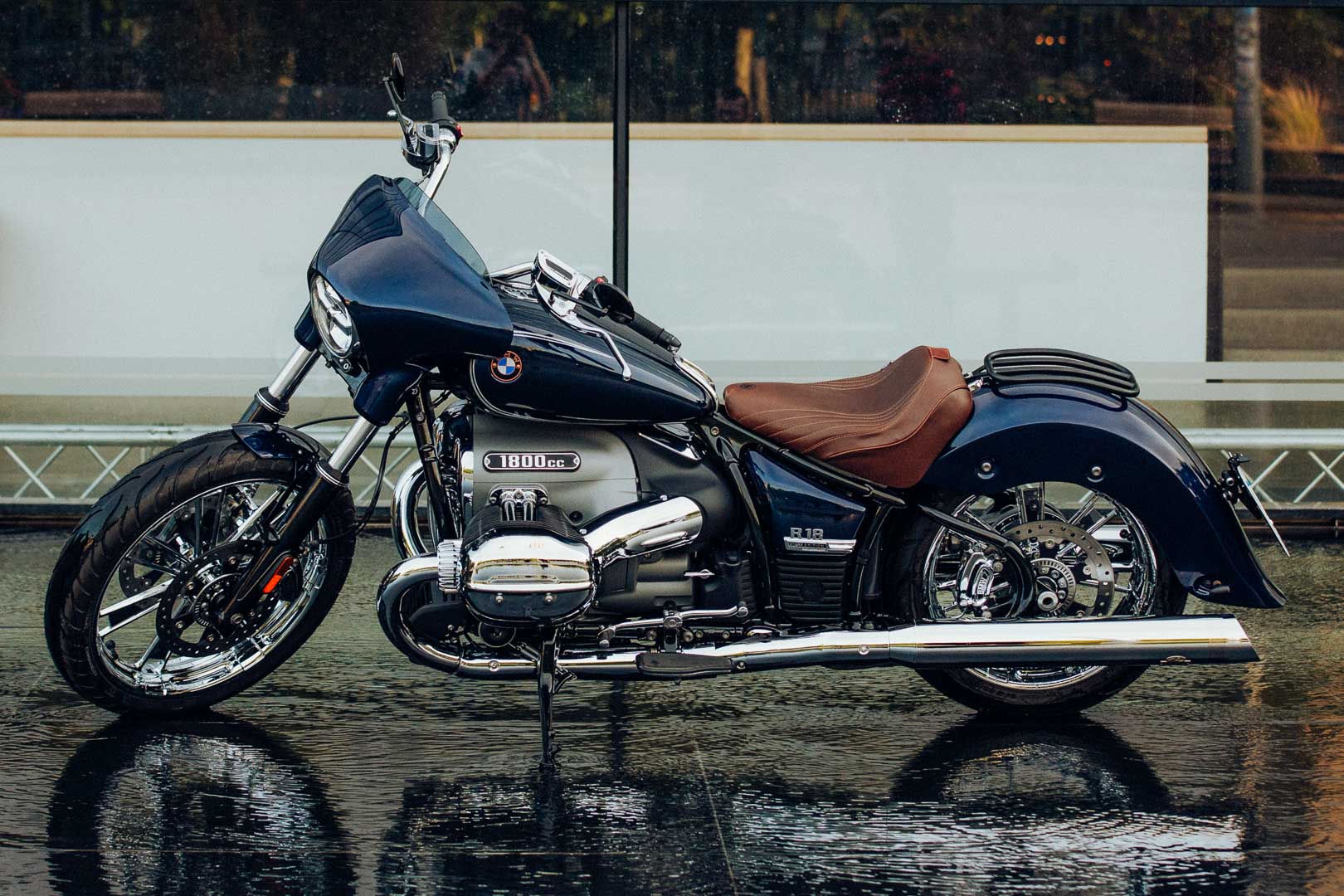 BMW automotive experts Cloppenburg took the relaxed approach with its R 18 Tansanit Titan. With Christian Gelbhardt and Kevin Gehrt at the helm, this function-focused custom R 18 begs to do some work—the rear fender is adorned with a Fehling luggage carrier. The cockpit gets the Rizoma treatment, with the mirrors, bar-end turn indicator lights, 3-in-1 rear Club S lights, license plate holder, and risers for the stock handlebar coming from the Italian company. Wunderkind Custom handled the lowering of the headlight, and LMC Bikes integrated the speedometer into the fuel tank. You also can’t miss the brown BMW Daily Rider seat and the fork-mounted fairing. The BMW wheels are chrome-plated forged aluminum in a 21-/18-inch configuration. The rear is slammed 20mm, courtesy of a Wilbers 640 Road shock. Also at the back is a Dr. Jekill & Mr. Hyde The Beat Long Chrome muffler with a Slashcut Chrome Extender. The Tansanit Titan shows off a BMW Tanzanite Blue II paint job with hand-painted pinstripes. Photography by Plan B!