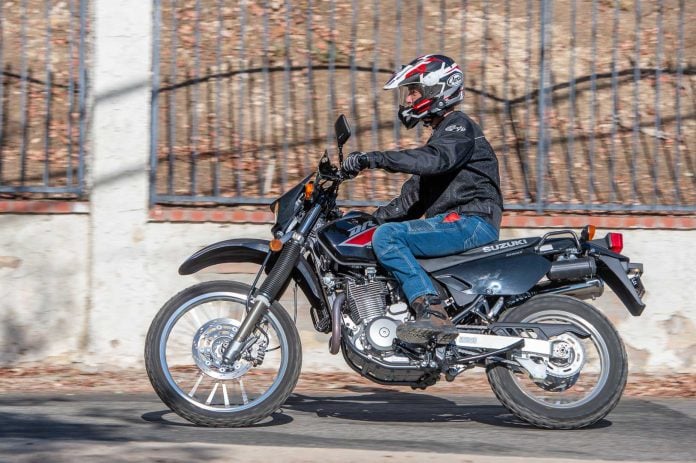 The last time we tested the venerable Suzuki DR650S, we grabbed a factory-lowered version. It turned a motorcycle that is fairly precarious off-road into an easy-to-ride trailbike, albeit one that still weighs 366 pounds with the 3.4-gallon fuel tank topped off. Although dual-sport motorcycles have dual personalities, many people only ride them on the street. So, this time, we took the 2022 Suzuki DR650S to the streets (almost exclusively) for our test. 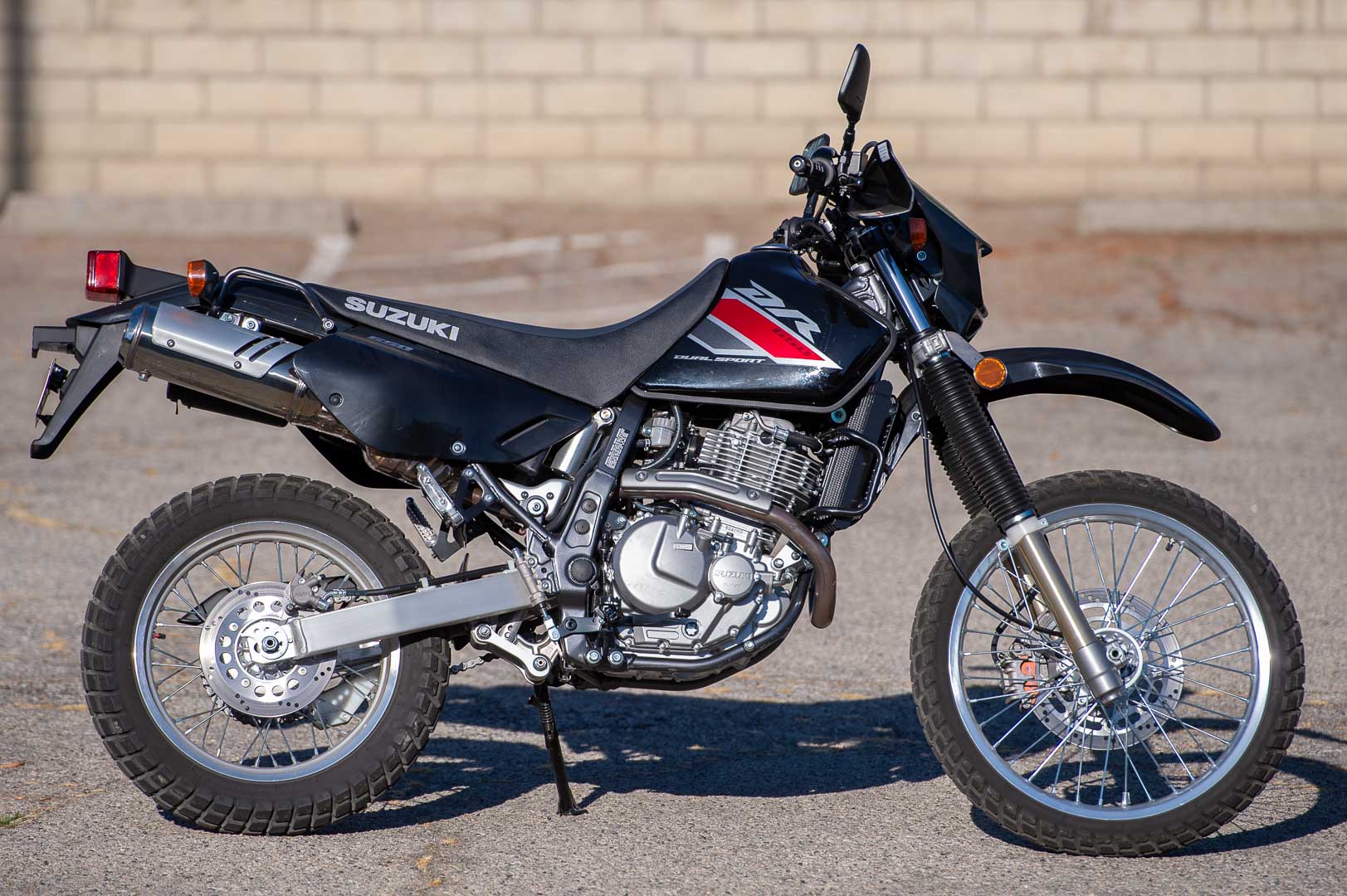 It’s easy to feel like Fred Flintstone on the 2022 Suzuki DR650S. Its roots date back to the 1985 Suzuki DR600SF. The DR650 debuted in 1990, with the 1996 revision being pretty much the same motorcycle that’s available in 2022.Evidence of the dated design can be found most prominently in the air-/oil-cooled engine fed by a choke-equipped 40mm Mikuni carburetor and Suzuki’s odd vacuum petcock. Look closer, and you’ll find a purely analog dash, clunky square mirrors, narrow footpegs, and a traditional fork (non-adjustable, naturally). More modern features include disc brakes, electric start, and a linkage-assisted shock—I know, not exactly cutting edge. However, while the 2022 Suzuki DR650S is undoubtedly an oldie, it remains a goodie.Lacking fuel injection, the DR650S requires some patience in the morning. Budget time to apply the choke, especially in cold temperatures, and let the engine get up to operating temperature before closing the circuit and venturing into traffic. How long that takes, of course, depends on what the thermometer has to say. Regardless, the motor fires up willingly and is trouble-free once you get it prepped for battle. 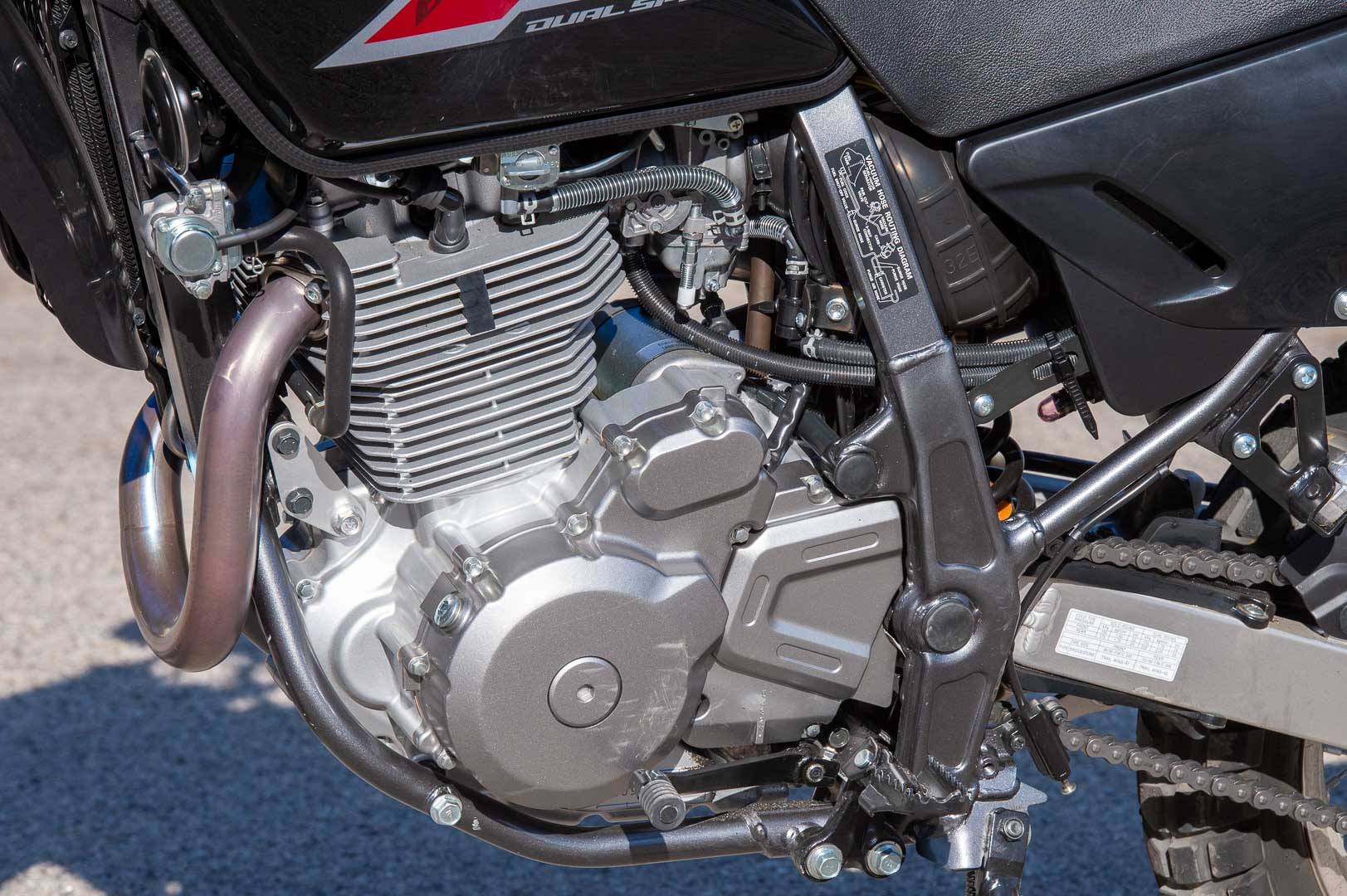 If you’re not used to dirt bikes, the standard DR650S will feel tall, and its weight will accentuate that. I ride dirt bikes, so the 34.8-inch seat height didn’t bother my 30.5-inch inseam. Part of the credit for the DR’s manageability is that the soft suspension has plenty of sag in its 10.4 inches of travel at both ends—definitely overkill for street duty.On the upside, the DR650S affords a great view of the proceedings in urban settings. You can see clearly over any car, and SUVs are less annoying. It also raises your profile, literally, making it easier for four-wheel-bound motorists to see you.Handling on the street is quite good. The old-school Bridgestone Trail Wing tires offer as much traction on the pavement as the torquey thumper will demand. The 21-inch front wheel doesn’t present a problem, even when having fun in city canyons. There’s more than enough cornering clearance, so it’s all about figuring out how comfortable you are on the edges of the Bridgestones. For almost anyone considering a DR650S, the tires are fine on the street. 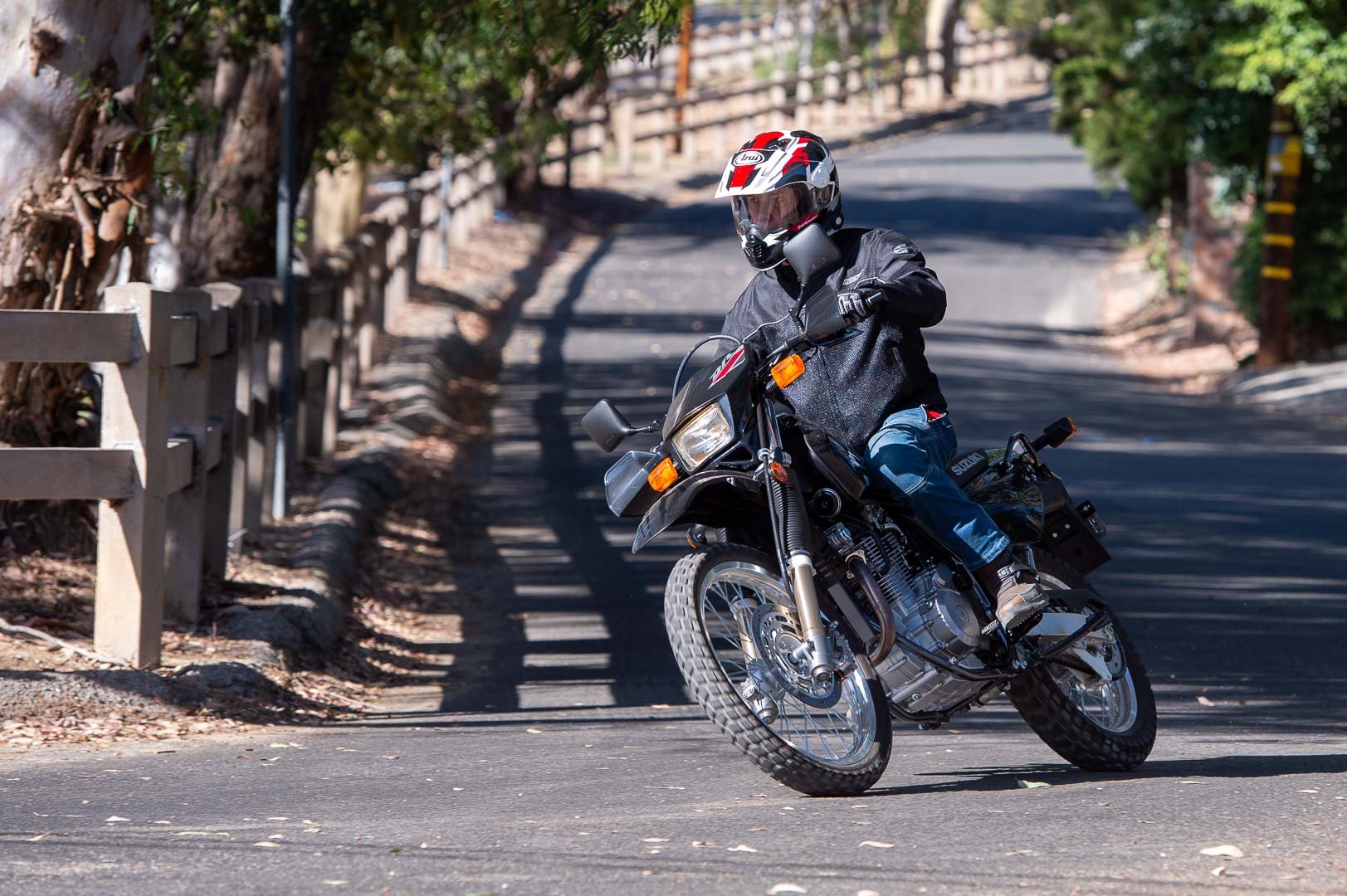 Once you run through the stock tires, you might want to upgrade. Metzeler Tourance Next 2 tires if we weren’t doing any dirt riding, other than on the hardest-pack dirt roads. If you’re really serious about street performance, companies such as Warp 9 offer 17-inch supermoto wheelsets. However, the DR650S does look a little odd when configured this way, though everyone has their own tastes.Dealing with traffic isn’t an issue thanks to the ultra-wide powerband with plenty of pulling power from idle on up. You can get out in front of traffic effortlessly when the light turns red. The irresponsible among us might even lift the wheel a few inches off the ground, just for good measure. It’s a highly intuitive motor that won’t intimidate anyone other than the rankest of novices. Yet, an experienced rider can have plenty of fun with the oversquare mill that features a 100mm piston.Snaking around traffic is fun. The throttle response and prominent seating are exactly what you want for that chore. Although not as narrow as a pure sport bike, the DR650S is trimmer than most street bikes. The clutch pull won’t wear you out, even though it lacks an assist function due to its 1900s design. 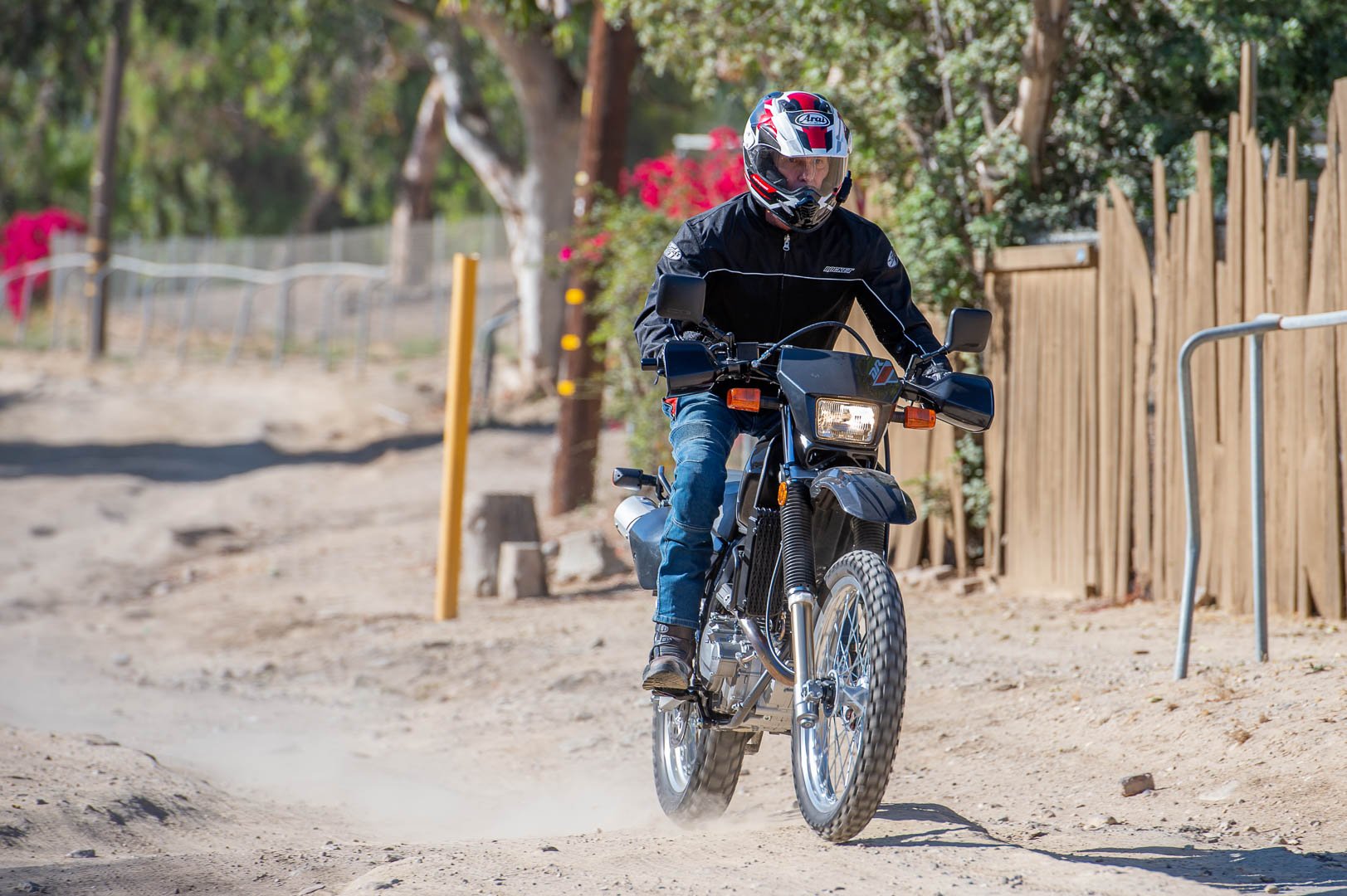 As expected, we did enjoy the urban dirt roads that dot Los Angeles. The DR650S took care of them without a problem, even with the Bridgestones aired up. The plush suspension that absorbs everything the street can throw at it is nice and cushiony on the low-speed LA city dirt.The 2022 Suzuki DR650S truly impresses on the freeway. Most modern dual-sport motorcycles are heavily skewed for the dirt, which is ideal for serious dirt riding. However, the level of vibration at highway speeds limits their usefulness. In contrast, the DR650S can cruise at speeds up to 80 mph all-day without fatiguing the rider due to excessive vibration. The windblast isn’t too bothersome up to 80, which is surprising, given the upright position.Should you feel the need to impress your friends and family on your Relive video, the 644cc motor will peek into triple digits, given enough room to get up to speed. Plan wisely, as the 90mm-wide 21-inch front tire will only allow you to brake so hard; for normal use, the front and rear disc brakes are fine.

As you’d expect with a motor so well-sorted out over time, there are no reliability issues. Keep the oil fresh—oil and oil filter changes are incredibly simple—and adjust the chain as needed. You’ll be good to go for many miles. Off-roaders will need to keep a closer eye on the air filter.The card up the DR650S’s sleeve is its versatility. You can commute on it or make exclusively local runs with the same smile on your face. It has enough power and comfort for longer runs on the freeway. Given its good high-speed behavior, we’d love to see a DR650S Rally from Suzuki; in the meantime, the aftermarket has you covered for that. If riding in the dirt is an integral part of your dual-sport equation, you’ll want to look into rubber suitable for the dirt, as the Trail Wings are only adequate. Part of the fun of the DR650S is that you can set it up in several ways, and you only need to spend $6849 to get started with a brand-new mount.Photography by Kelly CallanRIDING STYLE2022 Suzuki DR650S SpecsENGINECHASSISDIMENSIONS2022 Suzuki DR650S Price: $6849 MSRP