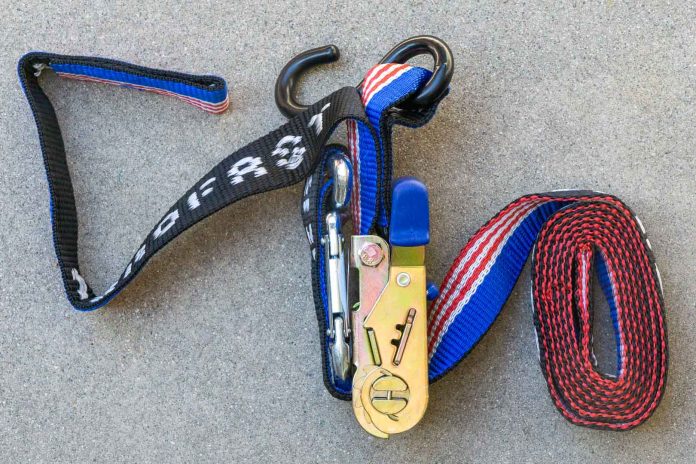 A big part of our job at Ultimate Motorcycling is transporting motorcycles. We move street bikes from the fleet to our headquarters, and transport dirt bikes to the boonies for roosting. Reliable tie-downs are an essential part of the motorcycle transport experience. We like traditional (and simple) cam buckle tie-downs for dirt bikes. However, heavier short-travel street bikes are best secured with ratcheting tie-downs. We heard good things about the Aerofast ratchet swivel carabiner motorcycle tie-downs, so we’re putting them to the test. 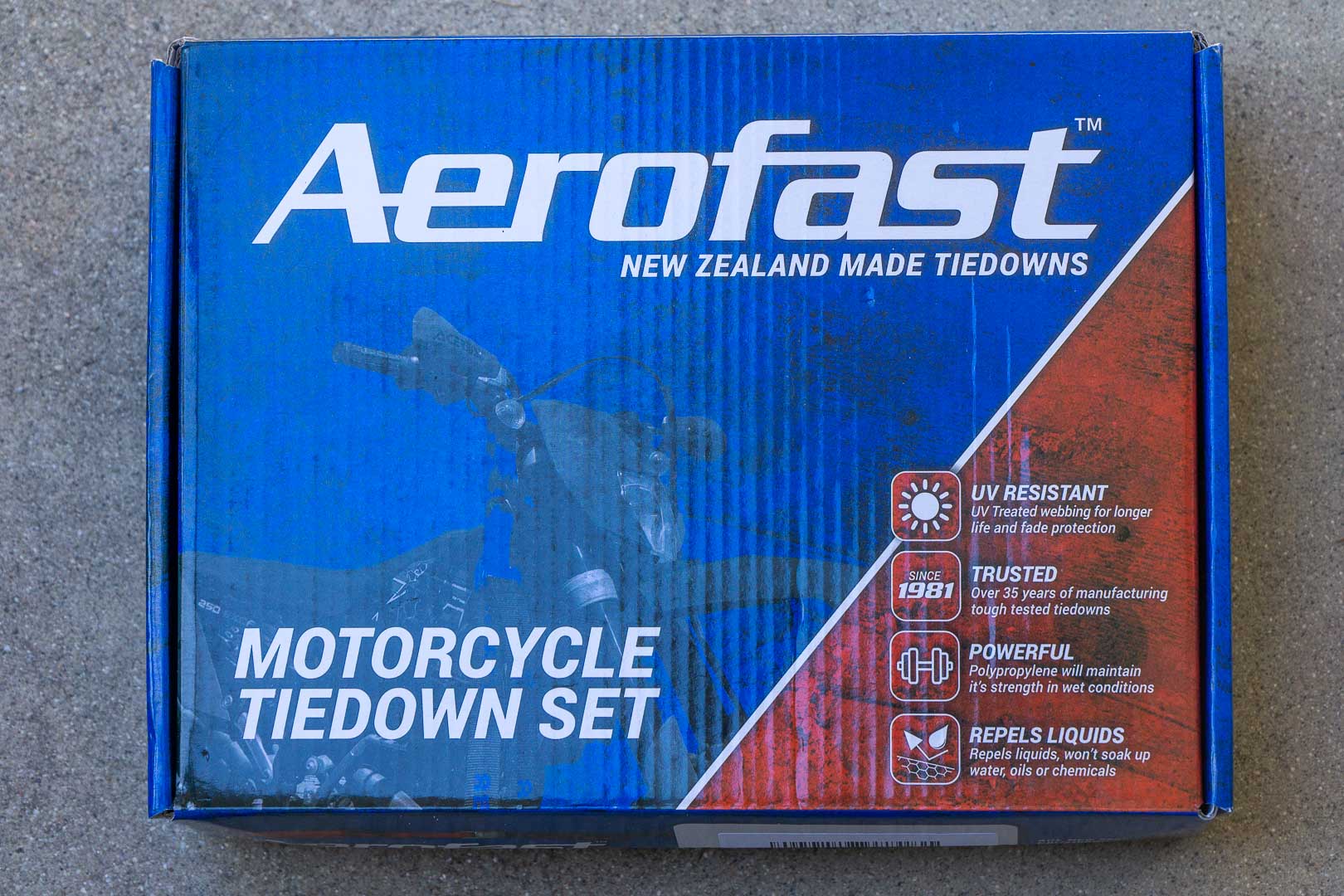 Right from the start, the Aerofast ratchet swivel carabiner motorcycle tie-downs have two features we like. The soft ties are built-in, and a swiveling carabiner attaches to the transport vehicle, eliminating twisted straps—almost, as we will explain.The numbers on the Aerofast ratchet swivel carabiner motorcycle tie-downs are impressive. At 1.5 inches wide, they’re the same width as many tie-downs. However, they are twice as thick as most, at 0.1 inches. Aerofast claims a break-strength of 3000 pounds per tie-down—that’s three tons for the pair. We’re good with that. You can always add straps to the rear of the motorcycle, if you’re the nervous sort or if you’ll be driving over rough roads. 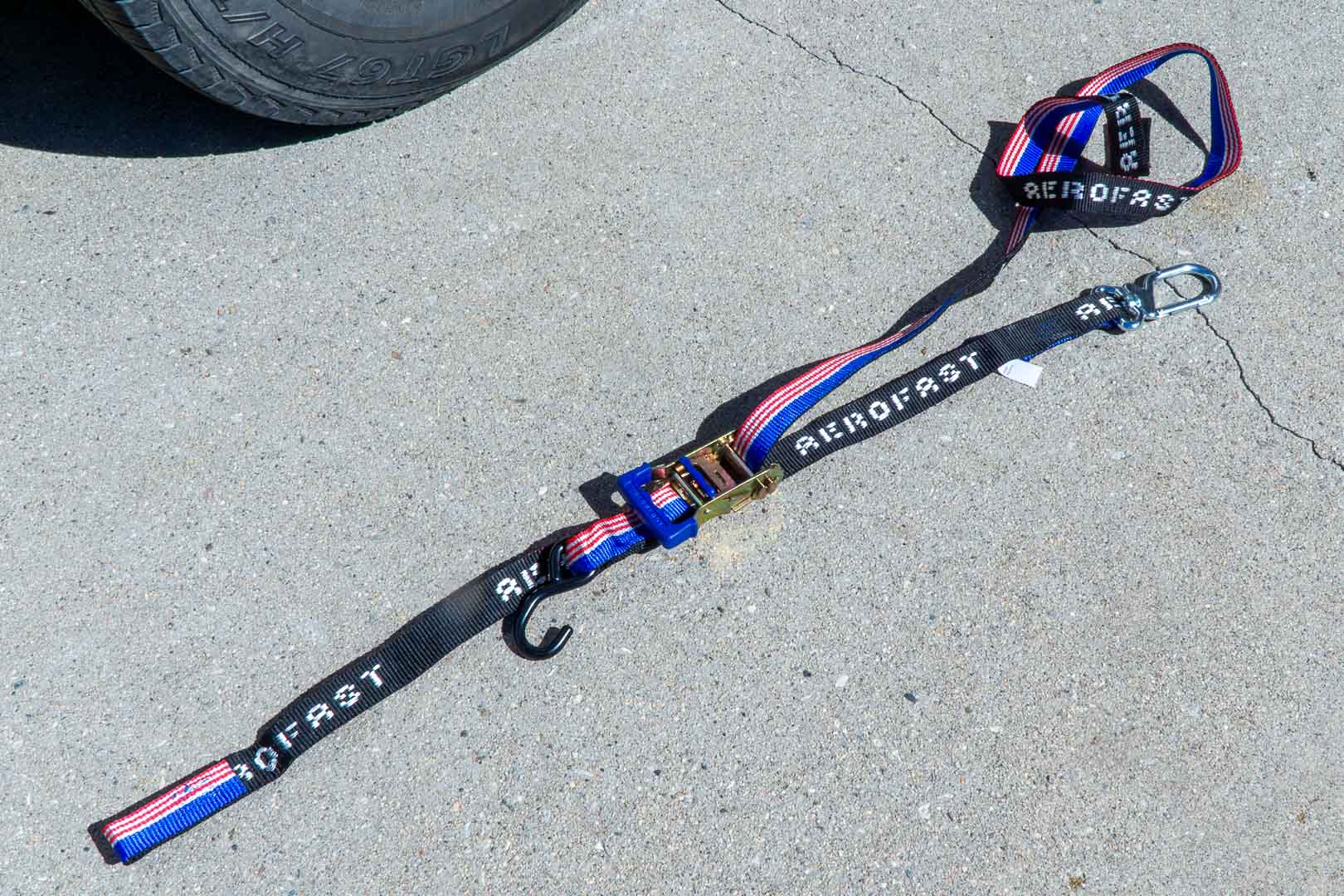 We had a Harley-Davidson Iron 883 that needed to be brought to the office, so it was our guinea pig. It weighs 564 pounds with the tank full, and the 3.6 inches of firm fork travel don’t give you much to work with when tying it down.The soft ties went around the Sportster’s fork tubes between the triple clamps and slipped onto a PVC-coated hook—no problem. The Aerofast straps are also compatible with handlebar harnesses and the PSR Bike Tie-Down Clamp.We would like to see a retaining clip on the soft-tie hook. Aerofast has clips on its cam buckle tie-downs, so we’re not sure why the clips are left off these ratchet units. It’s not an issue when you have everything cinched down, but it makes things easier when solo loading. 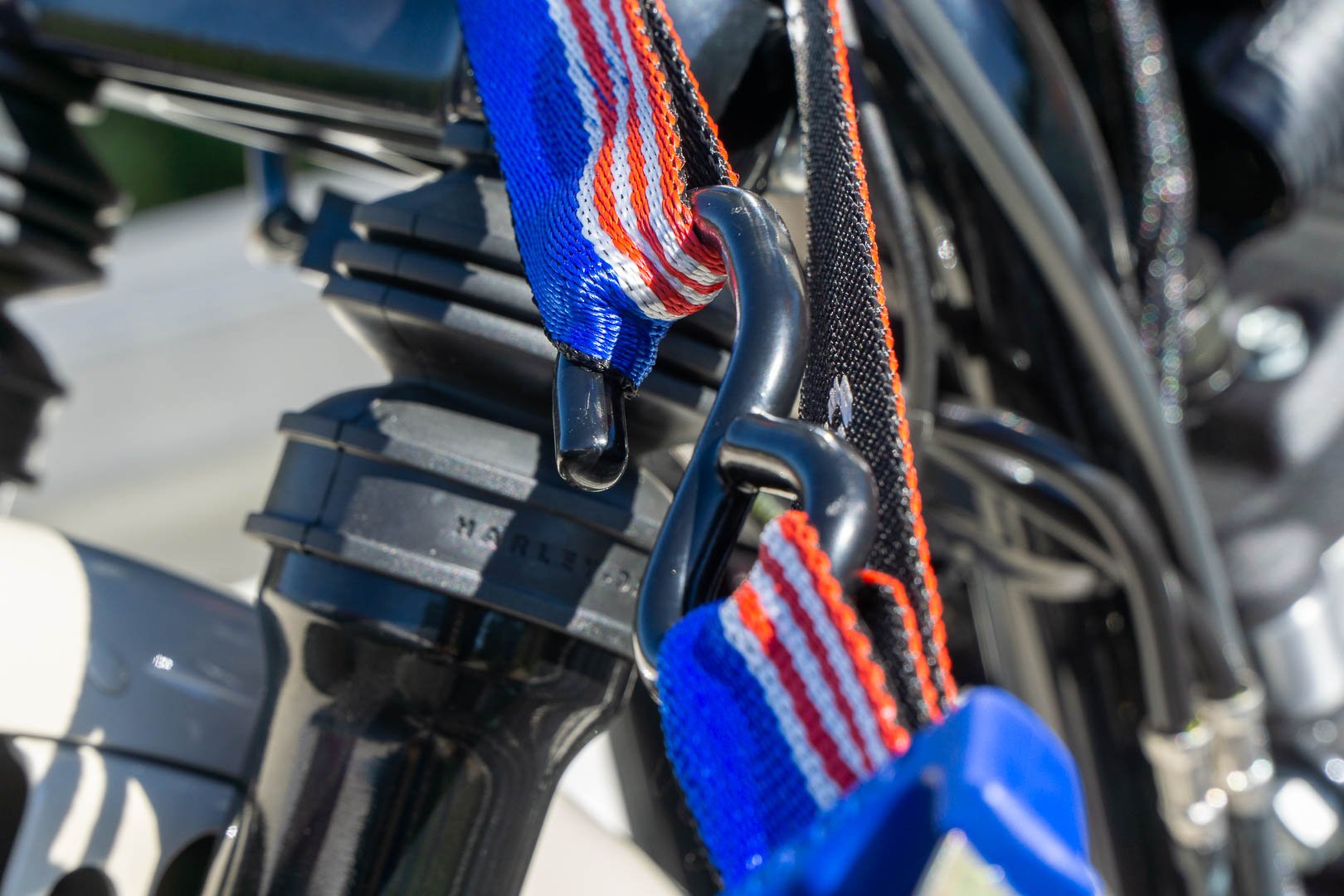 The swivel carabiner on the transport vehicle side is a great convenience. It stops the strap from twisting, preventing it from going into the ratchet at an angle and getting jammed.Tightening the strap is easy, and the ergonomically friendly rubber cover main ratchet lever is comfortable on the hands. The operation is smooth and secure, allowing precise tension to be applied. Be sure to resist the temptation to overtighten, as the leverage of the ratchet makes that easy. Once settled, press down on the handle to lock it in place.Yes, this can be done with cam buckle straps, but it’s not as easy on a street bike as on a dirt bike. 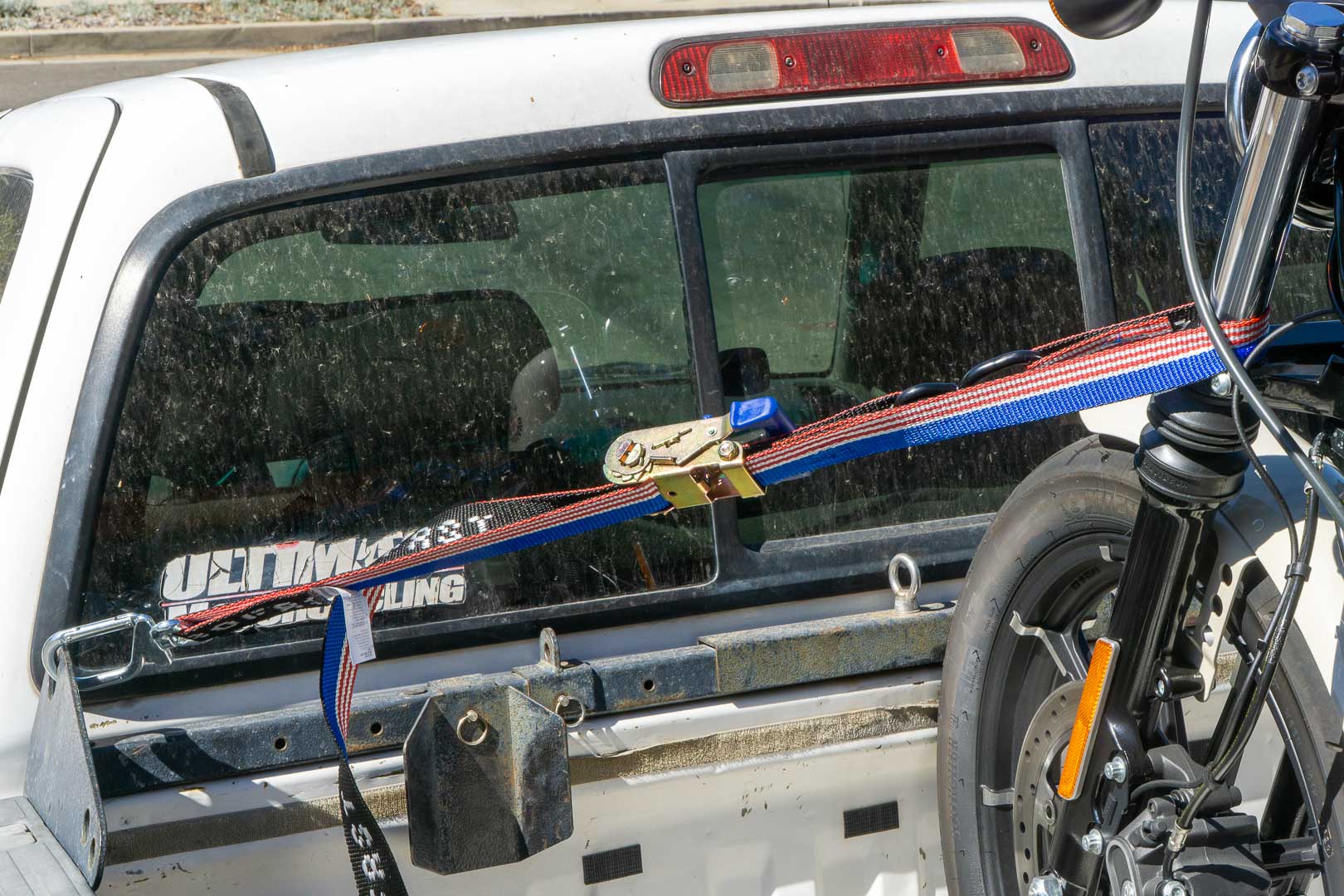 There is a caveat when ratcheting down the Aerofast tie-down. While the strap with the carabiner won’t get caught in the ratchet, the loose end can. Make sure you keep it lined up as you actuate the ratchet, or it will gum up the works. That happened to us the first time, but it hasn’t since, as we’ve tightened up our procedures. The tie-downs are eight-feet long, so we always have plenty of extra strap when we’re using them in our truck beds.In our transporting tests, the Aerofast ratchet swivel carabiner motorcycle tie-downs have secured the motorcycles without drama. The straps haven’t slipped a millimeter, even when bouncing around on LA’s whooped-out freeways and surface streets. With the three-ton break rating, we never worried that whatever heavyweight street bike we had in the back would go tumbling down the road.After its ability to secure the motorcycle, the next most important skill for the ratchet is the ability to loosen without pinching fingers. Fortunately, the Aerofast ratchet works superbly in both directions. 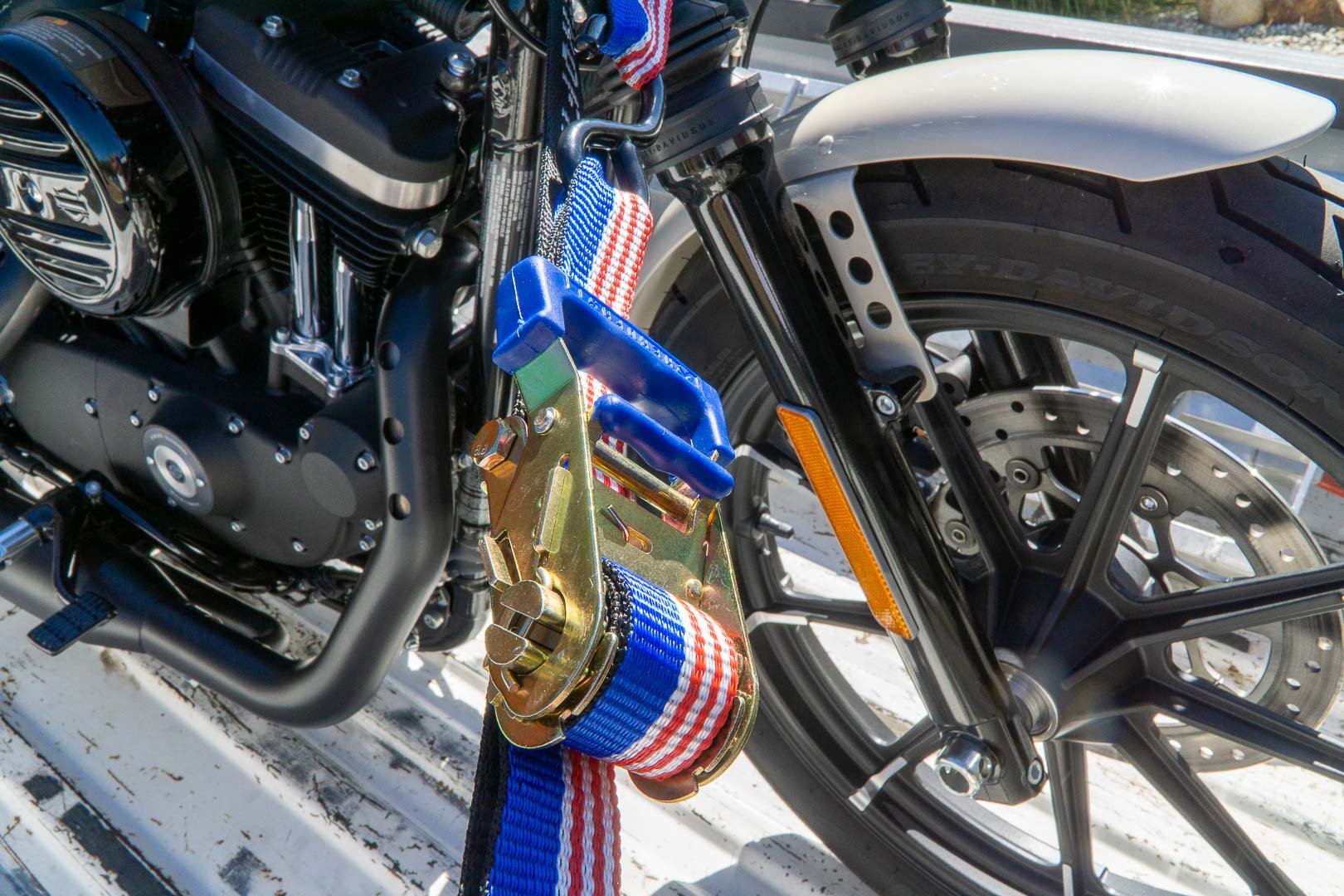 The release lever also gets the rubber coating, and it operates smoothly. The tension isn’t let go in a rush, allowing for a smooth release of the motorcycle. The Aerofast ratchet swivel carabiner motorcycle tie-downs are winners.Aerofast has been around for 35 years and makes tie-down for a broad range of applications—even beekeeping—and claims to have invented the soft tie-down. Aerofast’s 2000-denier polypropylene yarn is sourced from Spain and woven at its New Zealand factory using a Swiss-made loom—it’s a global effort. 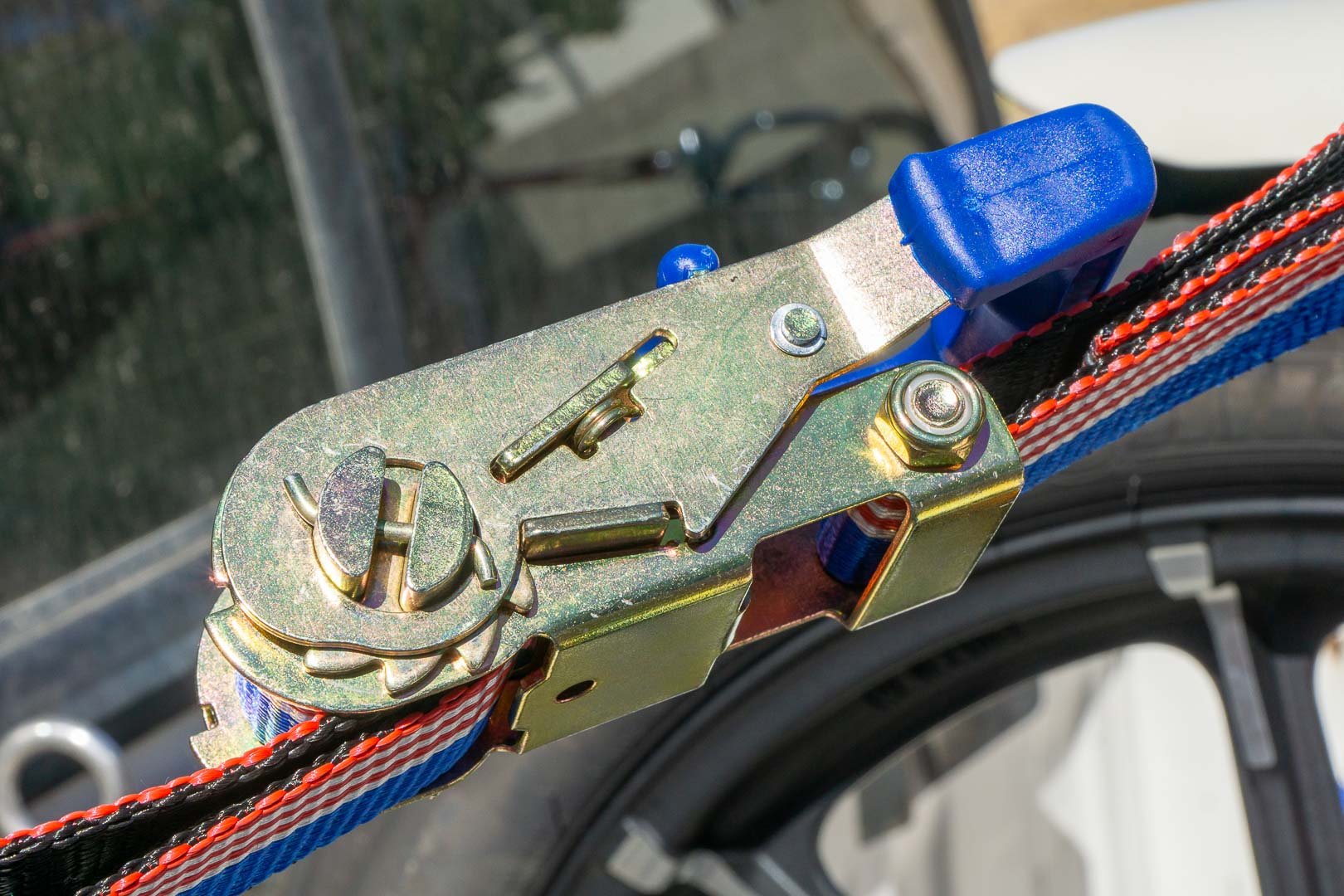 We haven’t had the Aerofast ratchet tie-downs long enough for us to evaluate their life, but we’ll update after a year to let you know how they’re doing. The thick straps and yellow-zinc coating on the ratchet device give us hope that they’ll last.The Aerofast ratchet swivel carabiner motorcycle tie-downs come with a handy carrying bag, though you do need a bit of patience and dexterity to roll the tie-downs up properly to fit them in. The tie-downs come in three colors—Black, Red, and USA—and a likeable MSRP of $37.50 a pair in the company’s store on Amazon.