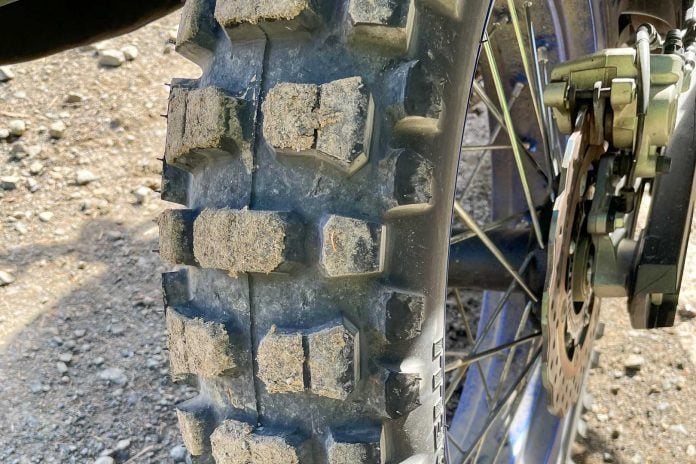 When we picked up the Ultimate Motorcycling Yamaha Ténéré 700 Project Bike from Yamaha, it already had about 1900 “tester” miles on the stock tires. I really didn’t have a lot of tread depth under me to start with. I then rode it 1120 miles on the highways and byways of California and Oregon to get it to my garage. Over the past few weeks, I have put on another 1200 miles of mixed paved and gravel roads. After the 2300 miles I have ridden, I didn’t feel like I was giving the Ultimate Motorcycling Yamaha Ténéré 700 Project Bike a fair chance to show me what it could do. It needed new tires. 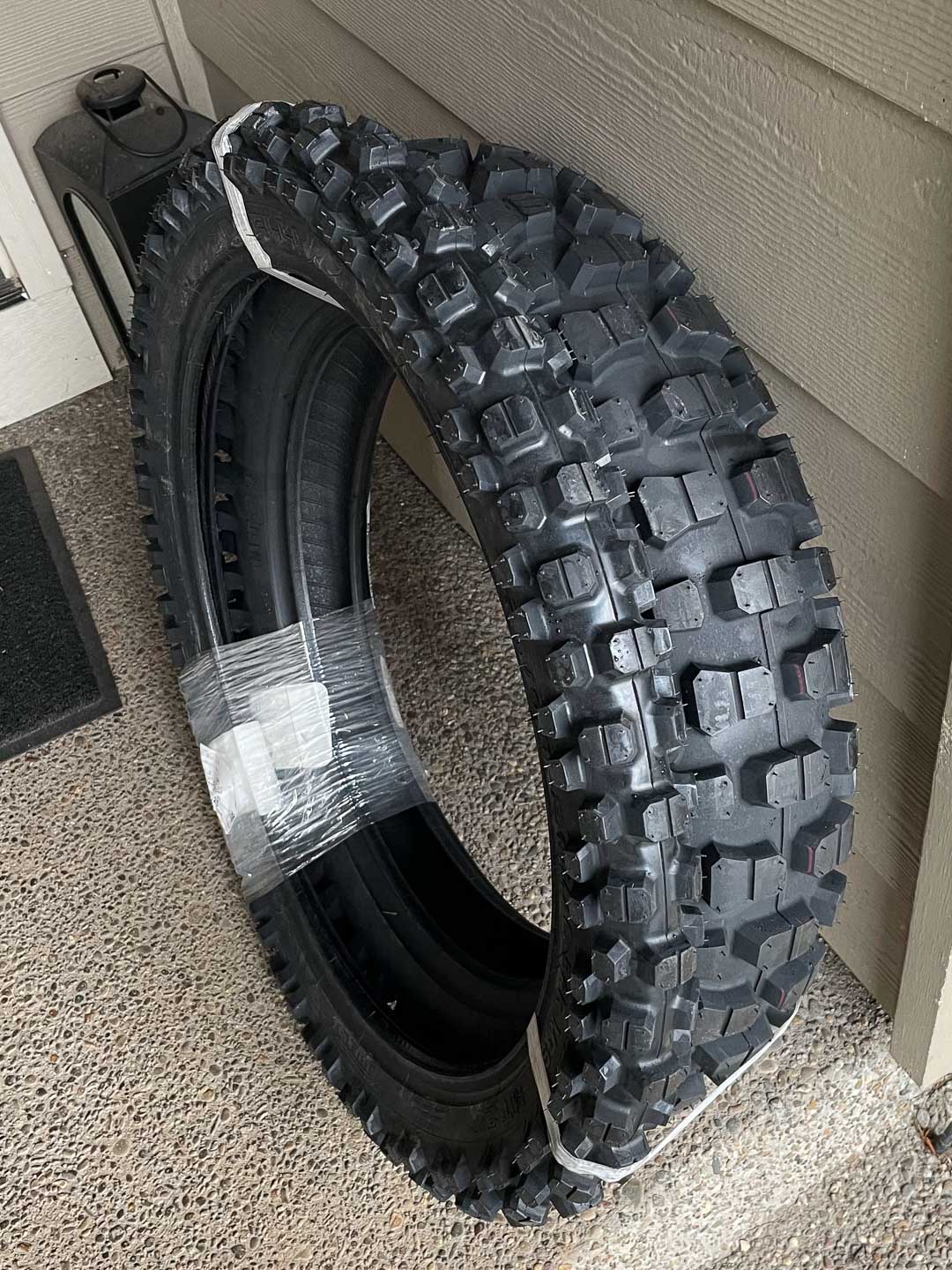 I had the option to re-shoe with the stock Yamaha Ténéré 700‘s street-biased, big-block Pirelli Scorpion Rally STR tires, or go with Pirelli’s seriously off-road, knobby tube-type MT 21 Rallycross rubber. Of course, I chose the 10/90 street/dirt-bias MT 21s, as I am riding as much off-road as the weather permits. I am glad I did. 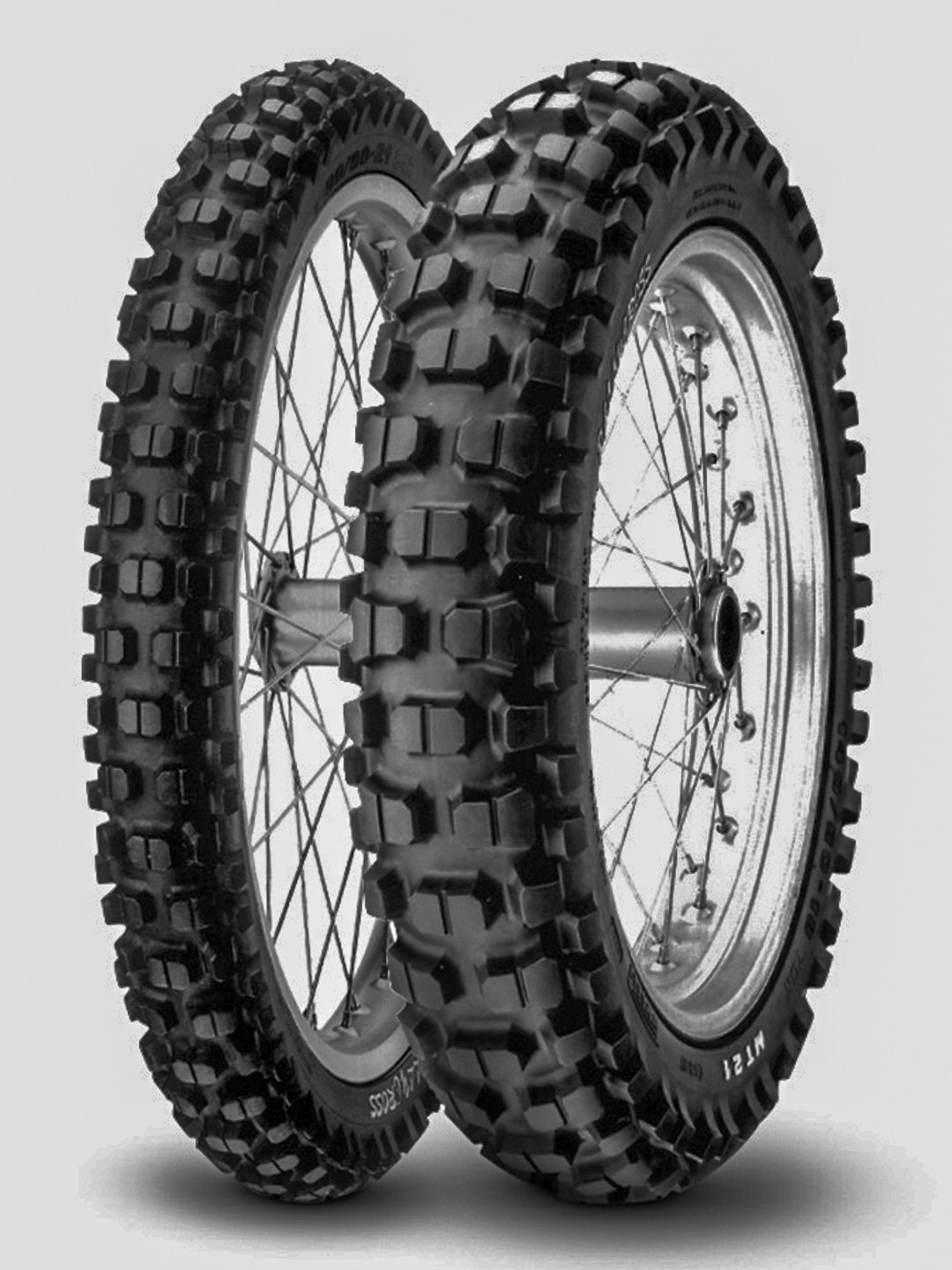 I brought our Yamaha Ténéré 700 Project Bike to Smitty’s Motorsports in Portland for the tire exchange. Jason Smith and Melody Souther are the founders and owners of this well-respected local independent shop. Smith, a factory-trained technician, and his crew work their repair, maintain, restore, and rebuild magic on all makes and years of motorcycles, ATVs, cars, and trucks. He can restore your basket case, build you a race engine, or anything in-between. However, it is the everyday repair and maintenance work that has built Smitty’s 5-star reputation. I brought my 2007 Yamaha Venture to Smitty’s on two occasions, and both times left feeling both appreciated as a customer and valuing their fair pricing. The shop is always busy, yet the turnaround time is quick, and I wanted the new Pirellis on ASAP. 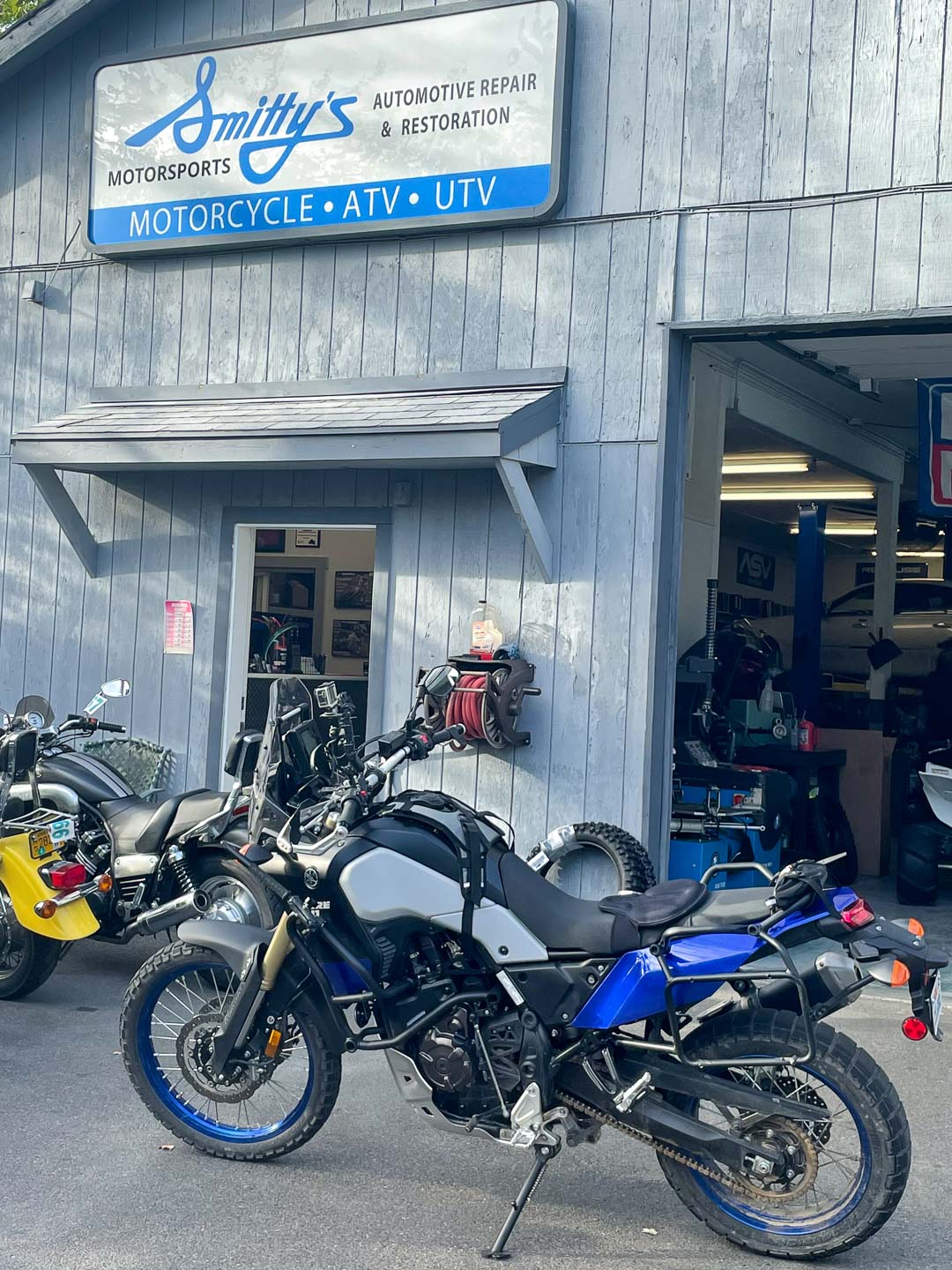 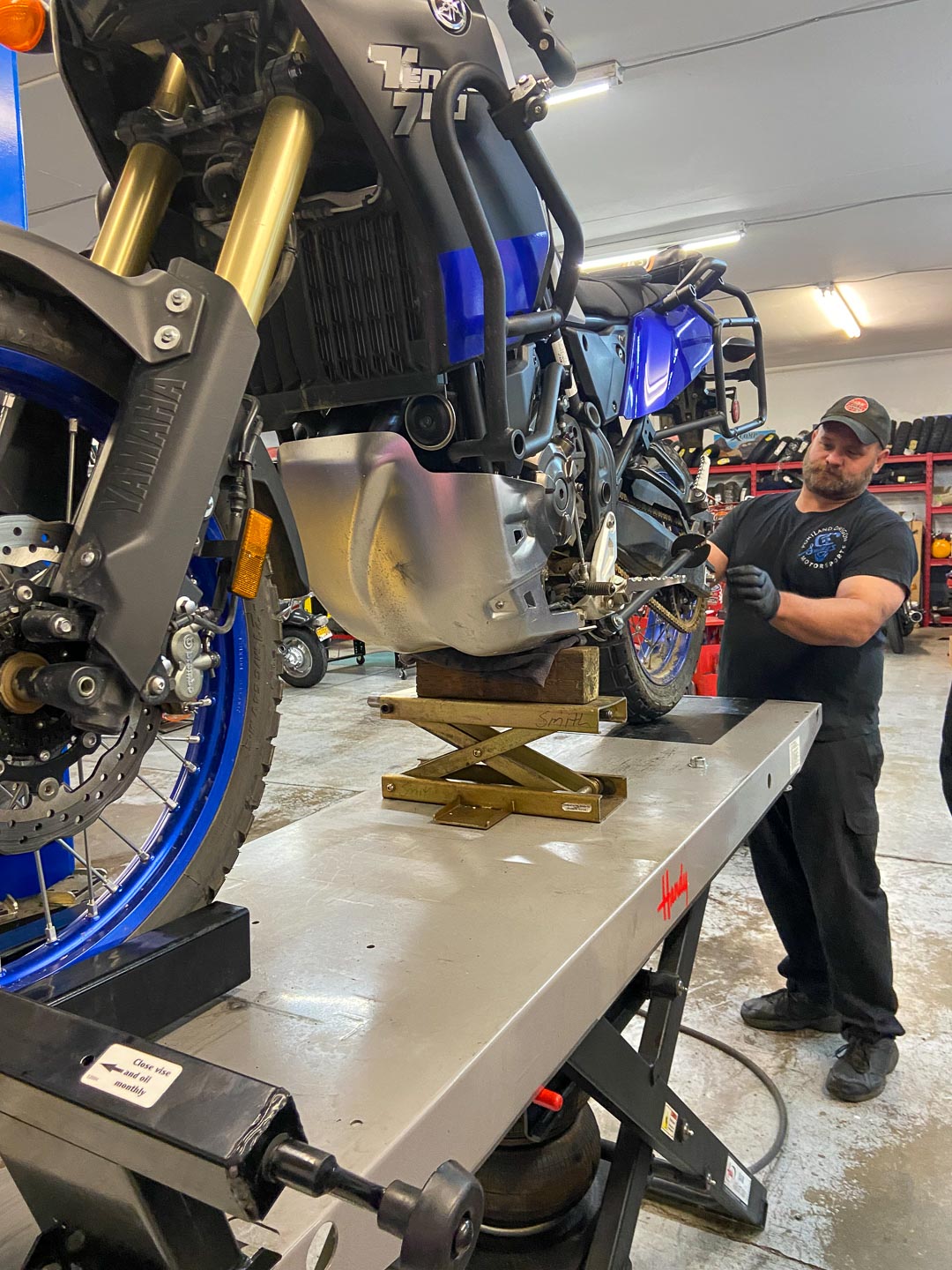 I rode the Ténéré 700 out of Smitty’s parking lot, and the first thing I noticed was that I could feel the MT 21’s knobbies up to about 15 mph. Above 15 mph, it was all smooth. I did some on-purpose weaving at 30 and 65 mph, and it seemed to lean over and come back up as easily as the stock tires. 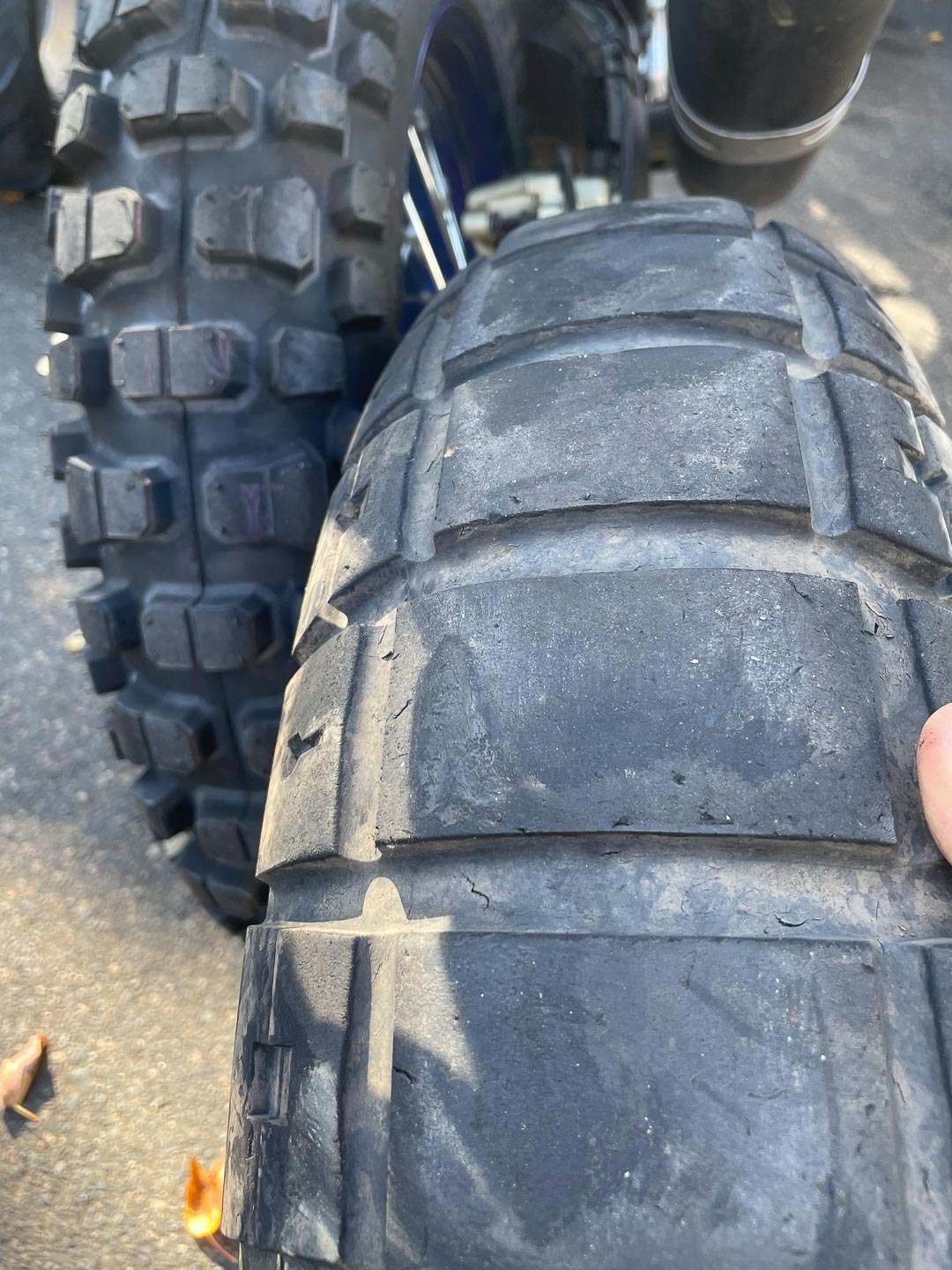 On the way out to the OHV park I had been to the week before, I took the same route with the same asphalt twisties. While I am not a professional racer with the resulting sensitivity, I felt just as confident going over the same route at the same pace. There was no dropping in or not wanting to straighten up. The Pirelli MT 21s handled just fine at freeway speeds and twisties. When I arrived on the hardpack gravel, I was instantly a more confident rider. 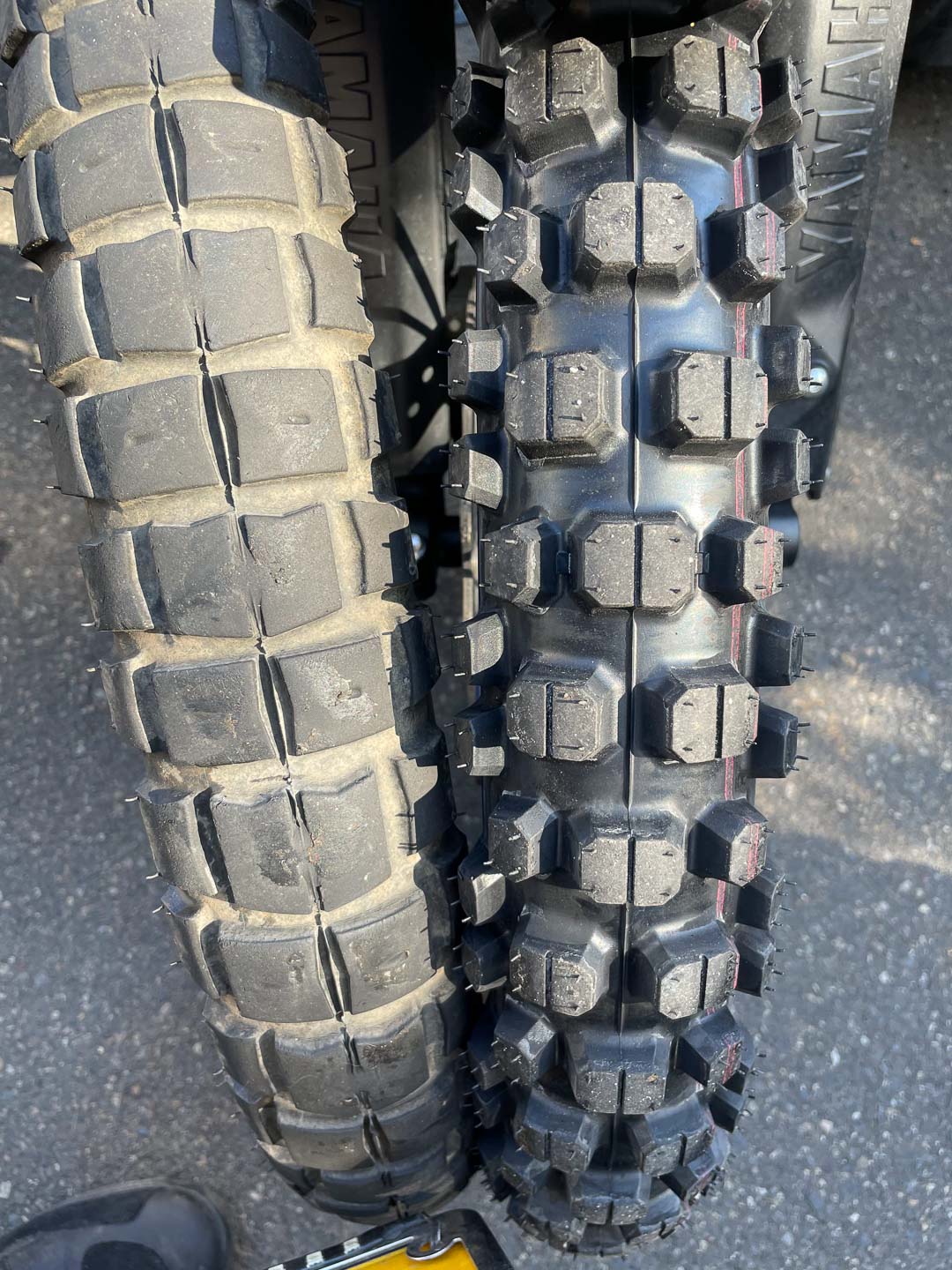 I wanted to re-ride the semi-technical two-track trails I had ridden the week before, but was warned it was mostly mud due to the recent rains. There would be no way to compare the traction and handling I had experienced on the stock, worn down tires, so I didn’t go mud whomping. Instead, I retraced about 45 miles of twisty gravel roads, and I felt a whole lot more controlled. 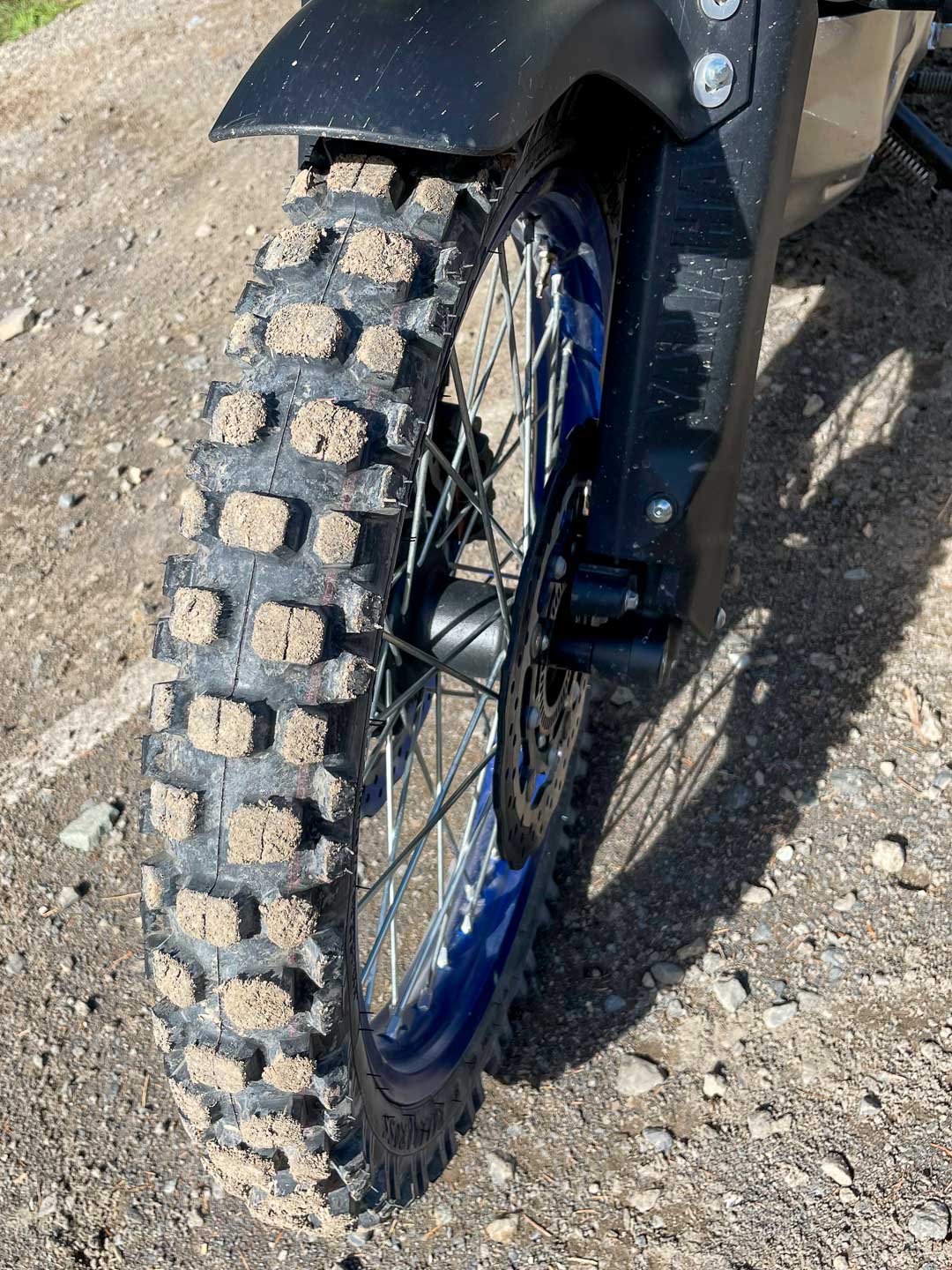 I had heard from many Ténéré 700 owners that the MT 21 is their choice for a front tire, and it was immediately apparent why. It tracks where you want it to go. I didn’t feel any instability from the front tire on the terrain. It didn’t skid across the gravel in the turns—I tracked on it. In fact, I got so comfortable with the front tire that I changed my focus to playing with the rear. 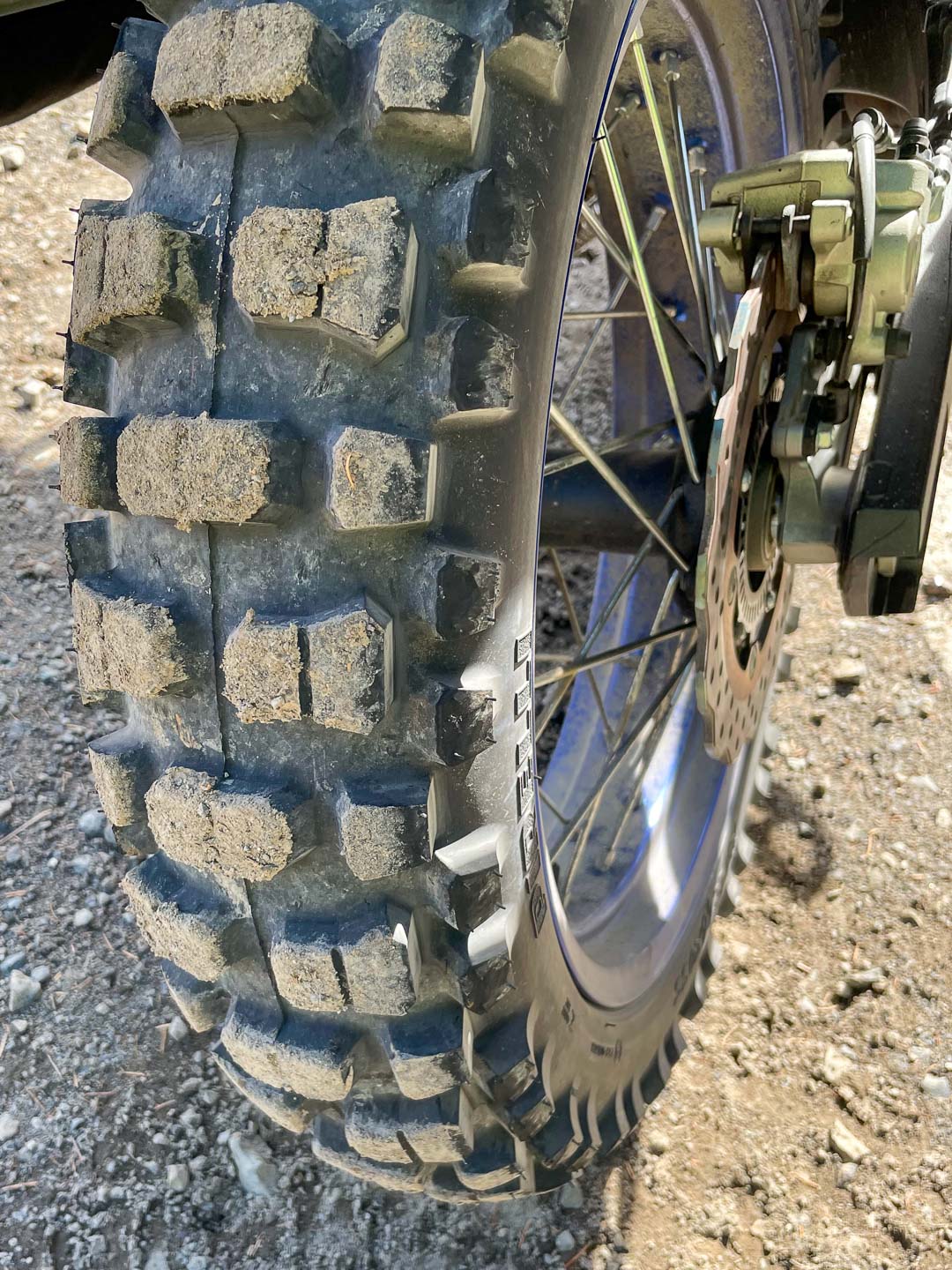 Aggressively throttling on exiting turns broke the rear loose, all the while giving me more acceleration than I had the week before. In addition, my riding partner was purposely falling farther behind as I was rooster tailing him. He told me he hadn’t experienced getting pelted by rocks off my rear tire in all the 300+ miles we had ridden off-road together. The smooth power of the Ténéré 700 made it just as easy to not break the rear loose. With a judicious right hand, the Pirelli MT 21 Rallycross rear tire delivers fully dependable traction. 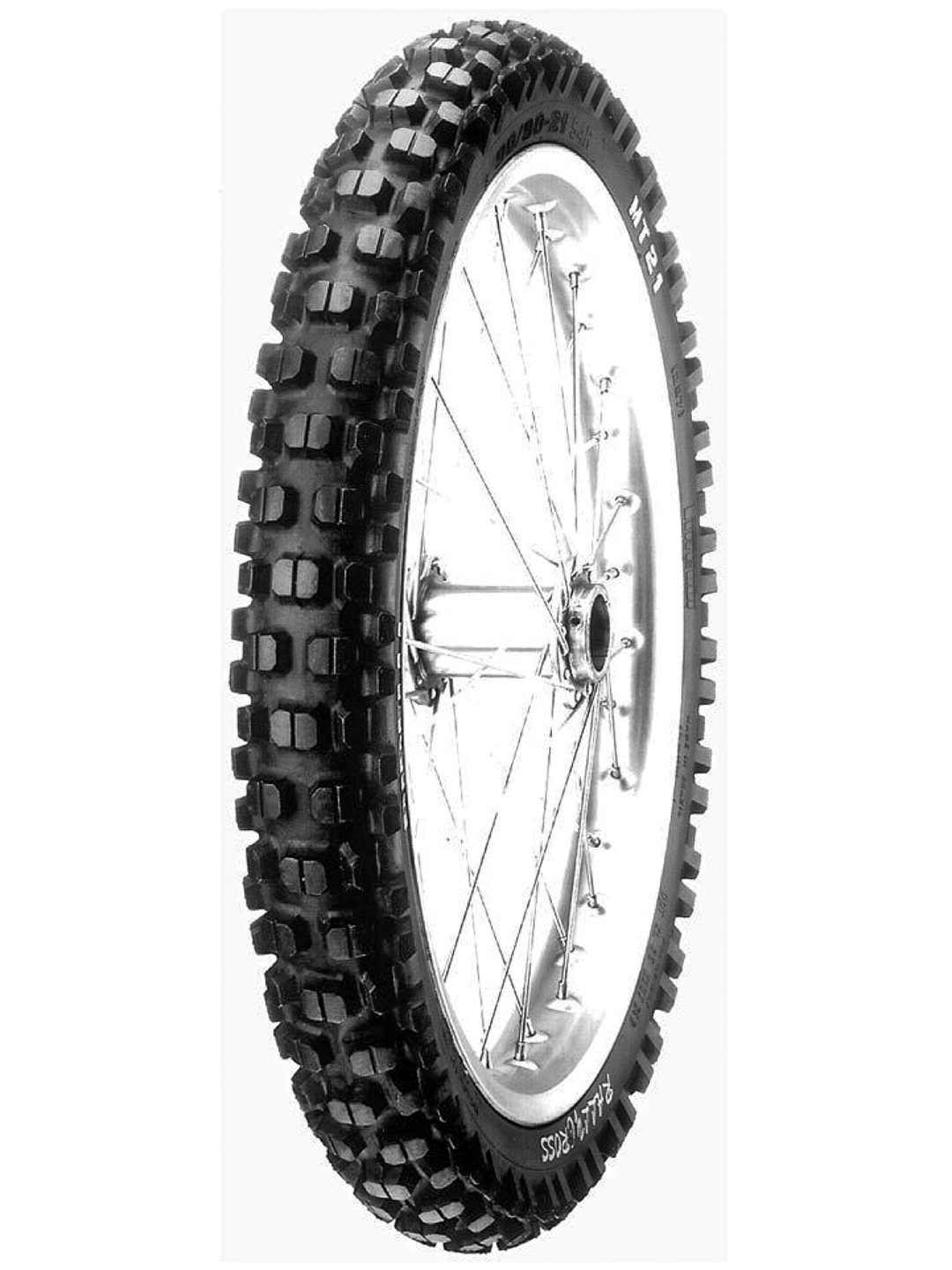 I love riding on recently graded dirt, and we happened to turn onto an uphill, all dirt, dead-end road. The MT 21s and I both loved that little section. We powered up the road full of twists and turns at a good clip until we reached the dead end. Downhill was as much fun as uphill, knowing that the MT 21s were giving me as much traction and control as the soil was allowing. 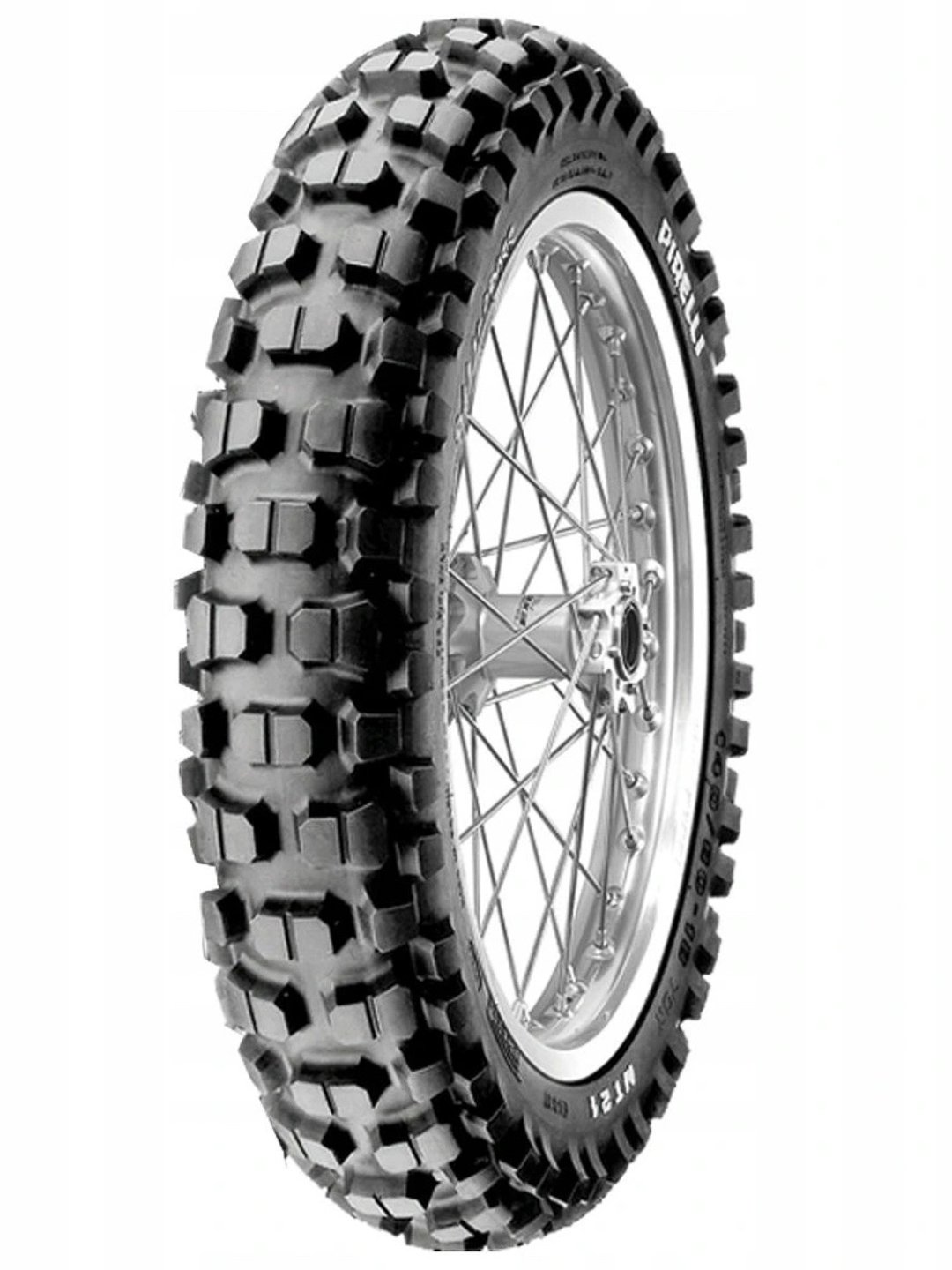 We all like having confidence in our tires. It usually takes me several hundred miles to trust a new type of tire and know what to expect from them. I felt that confidence within feet of arriving off-road with the MT 21s on the Ultimate Motorcycling Yamaha Ténéré 700 Project Bike. I know that I will wear them out quicker than I would like because I will be on-road riding to the off-roading areas—we’ll update the story when we know how long that takes. However, the off-road experience on the Pirelli MT 21 is worth the hassle of shorter mileage between tire replacements.