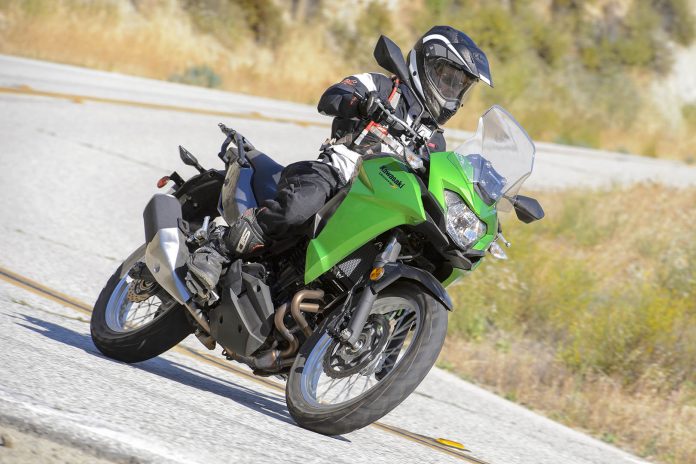 Adventure motorcycles are a popular genre, though few ADV bikes cater to new riders. We have a self-imposed 400cc limit in our New Rider’s Buyer’s Guides, though we’re going to stretch it by 11cc in this installment. Lower displacement motorcycles are smaller and safer, making them ideal for new riders who will inevitable make errors.We have three excellent choices for the new rider in the ADV segment, and we can help you find the best one for you.Best New Rider’s All-Around Adventure Motorcycle for 2021: BMW G 310 GSPowered by a punchy 313cc DOHC single, the BMW G 310 GS is the lightest and narrowest of the three ADV bikes on offer for new riders. The seat height is also the tallest at 32.8 inches. BMW offers an accessory seat that is a half-inch lower, but the GS is still the tallest of the trio. The seven-plus inches of suspension travel is part of the reason for the seat height. For long-inseam riders, BMW also has a tall seat.The 19-/17-inch wheel combo is standard for the ADV segment, and it’s a good mix between street and dirt prowess. This also means that there are many tires to choose from so you can customize the rubber for your use, including knobbies for time off-road.We like its all-around capabilities right off the showroom floor. It’s a perfect urban motorcycle that will suck up battered roads in the city. When it comes times for twisties, the motor has strong power, good handling, and high-quality braking. The motor is a thumper, so touring is the BMW’s weakest suit, yet it’s still capable of 88 mph. BMW offers two different top cases for the G 310 GS, plus a tank bag, though no side bags.It’s a BMW, so it is the most expensive of the ADV option, with an MSRP of $5945. If you’ve got the resources, BMW has plenty of accessories to help you set up the G 310 GS precisely to your liking.We have tested the BMW G 310 GS.Best New Rider’s 2021 Adventure Touring Motorcycle: Kawasaki Versys-X 300 ABSSporting the only twin in the category, the Kawasaki Versys-X 300 is smoother and ready for the open road. Touring riders will appreciate the low-cost plastic sidebags from Kawasaki, along with the tall standard windshield.Although a twin, the Versys-X is just 12 pounds heavier than the BMW. It is manageable off-road with the right tires, and the 19-/17-inch wire-spoked wheel pairing gives you plenty of choices. However, stay away from rough roads at anything but the lowest speeds—wheel travel is just over five inches in front and under six inches in the rear. Having said that, the Versys-X works quite well on unpaved hardback roads thanks to its predictable handling.With a 32.1-inch seat height, you get that commanding view of the road, yet it’s not exceptionally far to the pavement. The Kawasaki Versys-X is a fine commuter motorcycle, especially if a freeway is involved. The twin lacks torque compared to the thumpers, though the motor’s flat torque curve makes it easy to ride. The twin also likes to wind up in the canyons, and the Kawasaki’s handling and braking are willing accomplices.At $5899, the 2021 Kawasaki Versys-X 300 ABS is just $50 less than the BMW, though both are great deals for adventure motorcycles.We have tested the Kawasaki Versys-X 300 ABS.Best New Rider’s 2021 Adventure Motorcycle for Off-Road: Royal Enfield HimalayanAlthough we have billed it as the best off-road ADV for new riders, the Royal Enfield Himalayan also has other attributes that make it stand out. With a seat height of 31.5 inches, shorter riders will be encouraged. The Himalayan boasts this feature, even as its suspension has the longest wheel travel of the three—nearly eight inches in the front and over seven inches in the rear.However, the Himalayan is also the heaviest of these three ADV motorcycles, and by a considerable margin. The Royal Enfield thumper is 65 pounds heavier than the BMW and tips the scales at 53 pounds more than Kawasaki.The extra weight is hampered by the relative lack of horsepower produced by the lower-tech engine. The BMW and Kawasaki motors are liquid-cooled, DOHC affairs. The Himalayan is an air-cooled, SOHC, two-valve, long-stroke motor. As a result, torque is good, but it runs out of breath on top. That makes it suitable for trails—but stay away from highways and freeways.Trail riding is the Himalayan’s forte. It has long-travel suspension, plus a 21-/17-inch wire-spoked wheel pairing that allows you to get highly aggressive knobby tires. Plus, that torquey thumper enhances the Royal Enfield’s off-pavement credentials, even with the additional poundage.If you just like the ADV look and want to ride around town, the Royal Enfield Himalayan is a plausible choice. It has enough acceleration for urban traffic, and the suspension and 21-inch front tire will prevent you from being swallowed up by potholes. Plus, you get to show off the Himalayan’s retro-cool vibe.It’s also worth noting that the 2021 Royal Enfield Himalayan has an enticing MSRP of $4999, with an abundant choice of colors. Keep in mind that the Himalayan does not have the fit, finish, and reliability reputation of either the Versys-X or GS.We have tested the Royal Enfield Himalayan.