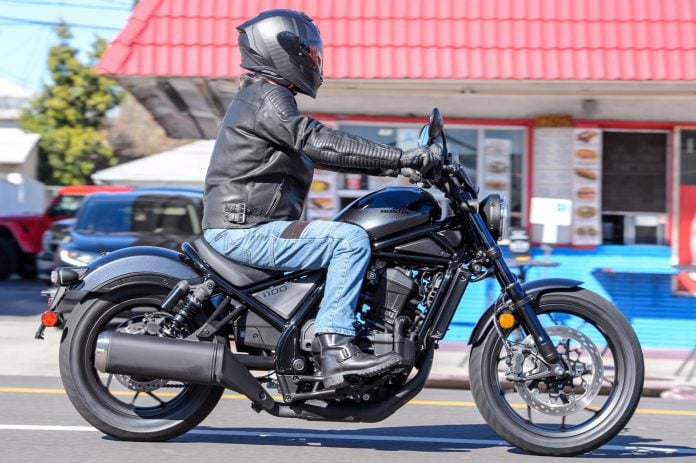 Just when it looked like Honda was easing itself out of the cruiser business, the 2017 Honda Rebel 500 and 300 appear. With motors based on existing sportbike models, the inexpensive Rebels became an instant hit.Now, the 2021 Honda Rebel 1100 is here, and it’s the perfect upgrade path for a Rebel rider looking to be, well, more rebellious. In November, our First Look of the Honda Rebel 1100 went over the technical aspects, so this time we’re going to focus on riding this intriguing new cruiser.1. If you can ride a Honda Rebel 500 or 300, you can ride the Rebel 1100. That’s the most important thing to take away from this test. With a 27.5-inch seat height, compact seat/grips/pegs triangle, and light weight, the 2021 Honda Rebel 1100 is always under your full control without an undue amount of effort. 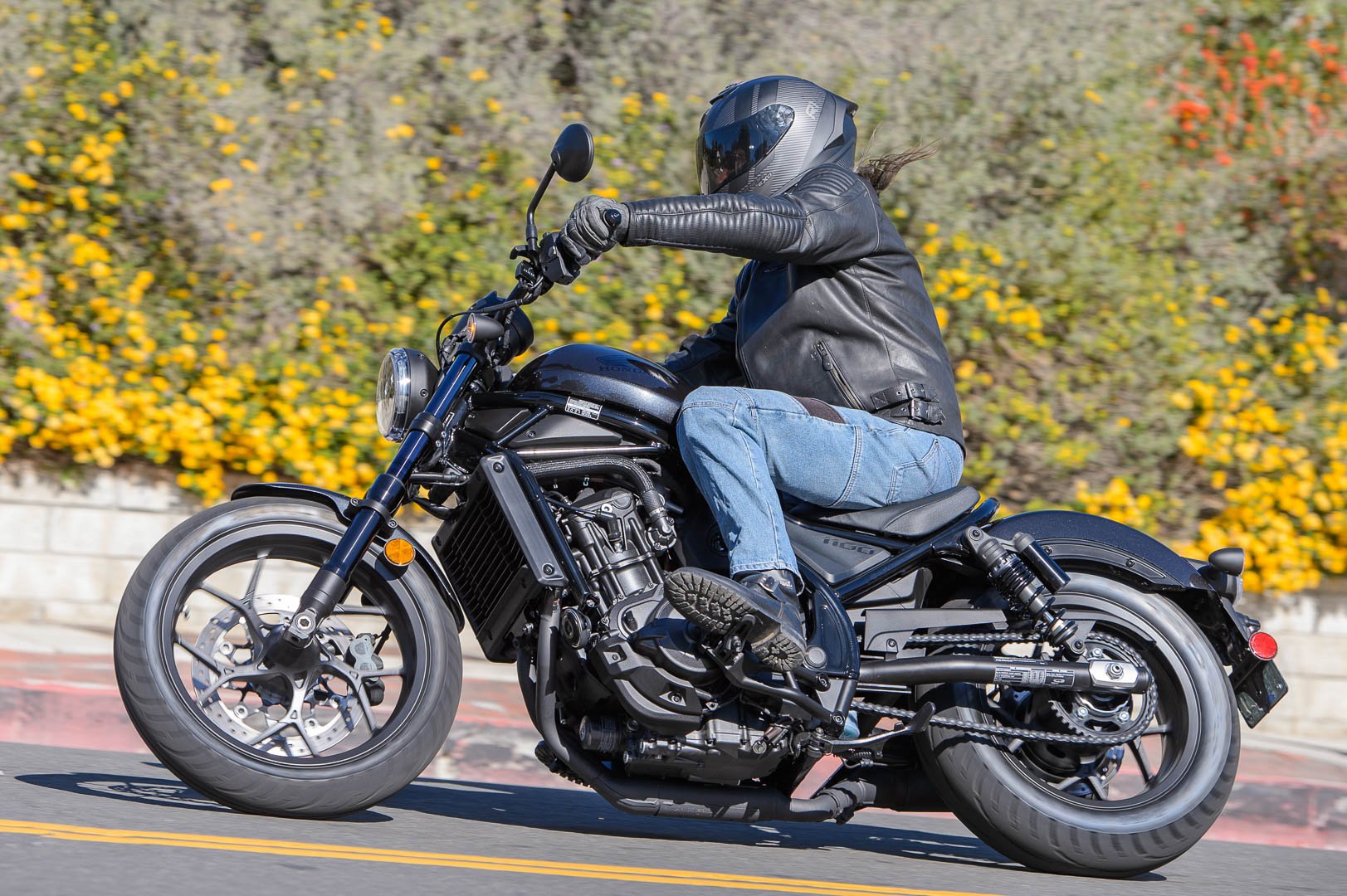 2. The DCT variant, which we tested, is even more welcoming than the manual-clutch 500 and 300. Start up the parallel-twin, and it’s twist-and-go once you hit the Drive button on the right handlebar control pod. The Dual Clutch Transmission will do all the shifting duties for you, in addition to automatically controlling the clutch. You can shift the six-speed 2021 Honda Rebel 1100 DCT manually, if you like, via paddle shifters on the left handlebar.3. There are three preset power modes on the Rebel 1100 DCT, though the Sport mode will get almost all the use. There’s a Rain mode, and it makes sense if the road is wet—you want less power and lots of traction control. Next up is the Standard mode. It gives the rider more performance, while still considerably reining in the power. Unless you’re a rank beginner, you will want to use the Sport mode. It has maximum power, minimal traction control, moderate engine braking, and aggressive DCT shifting. The Sport mode is still entirely smooth and controllable, and the Standard mode feels lethargic in comparison. 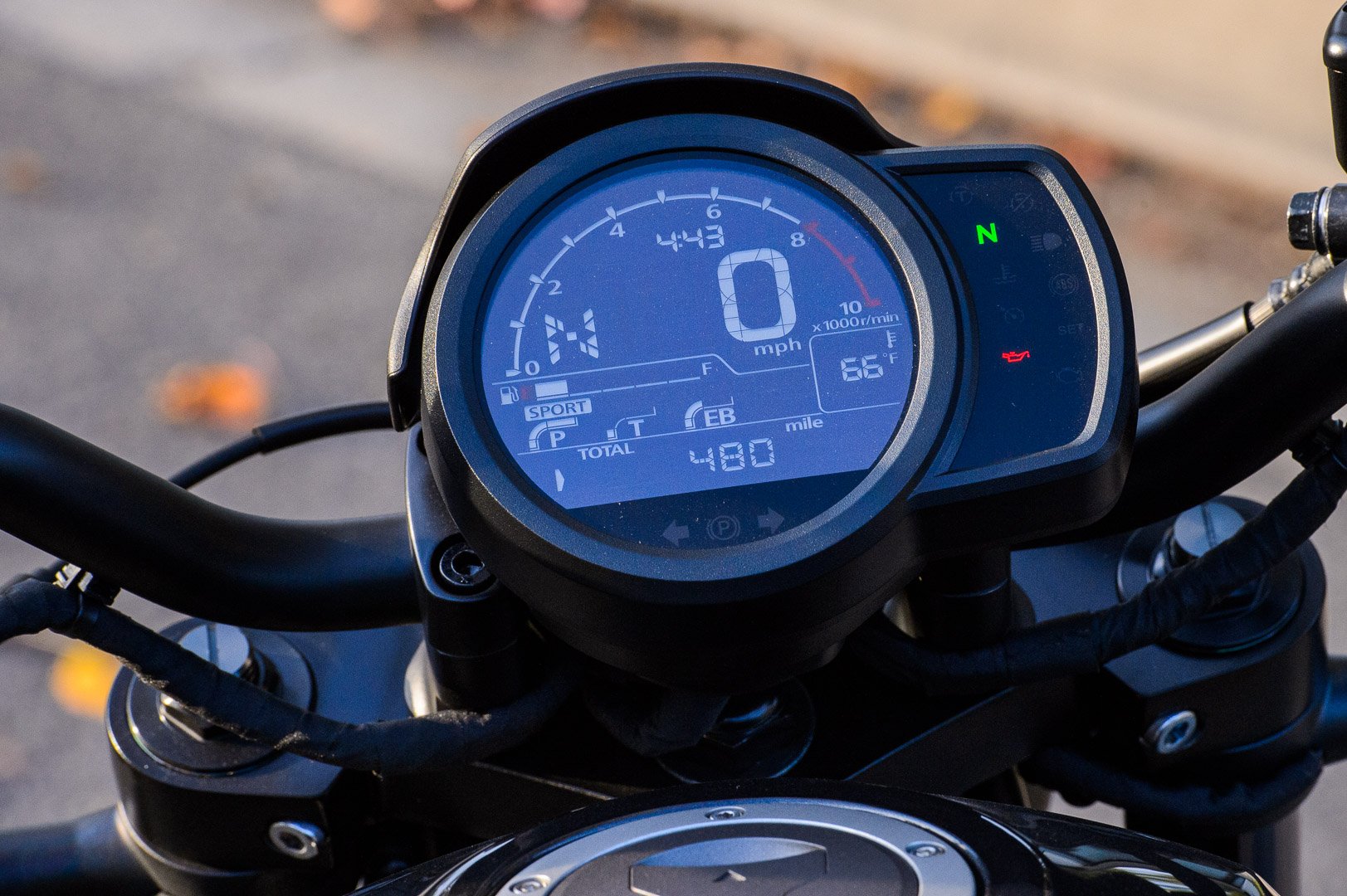 4. The Secret Sauce is the customizable User mode. Honda lets you pick individually between three levels of power, traction control, and engine braking, and shifting aggressiveness. It’s always a more enjoyable ride if you can set the motor up to your preferences, and Honda makes that easy with the Rebel 1100. It’s not a big deal, but I like plenty of engine compression braking. So, my User setting is maximum power and engine braking, most aggressive shifting, and minimal traction control. If you want to jack up the traction control, I won’t think less of you, but on dry roads that aren’t covered with dirt, you won’t be inadvertently spinning up the rear tire in any setting. In case you’re wondering, ABS is non-adjustable and always on.5. Moving up to the 1100 does not compromise the Rebel’s urban feel. The 2021 Honda Rebel 1100 DCT is as friendly as it gets in traffic and on city streets. You’re low to the ground and you always have the feel of being in full control, even as the DCT takes care of the clutching and shifting. Turning is absolutely intuitive, and nothing unexpected ever happens. It’s a fun, relaxing, and efficient ride.6. The 2021 Honda Rebel 1100 DCT is very much like riding the 500 or 300, but with a lot more power on tap. You can get up to serious speeds between stoplights, if you’re willing to twist the throttle to the stops and let the DCT rip through the gears. Plus, if you’re on the freeway and no one is looking, a “1” digit can be made to appear to the left of the two-numeral digital speed readout. Remember, that’s the motor from the Africa Twin adventure bike, retuned for more low-rpm power. That is what you want for battling city traffic. The firing sequence gives the Rebel 1100 motor a great V-twin-like feel, and not a bad sound considering our EPA masters must be satisfied. 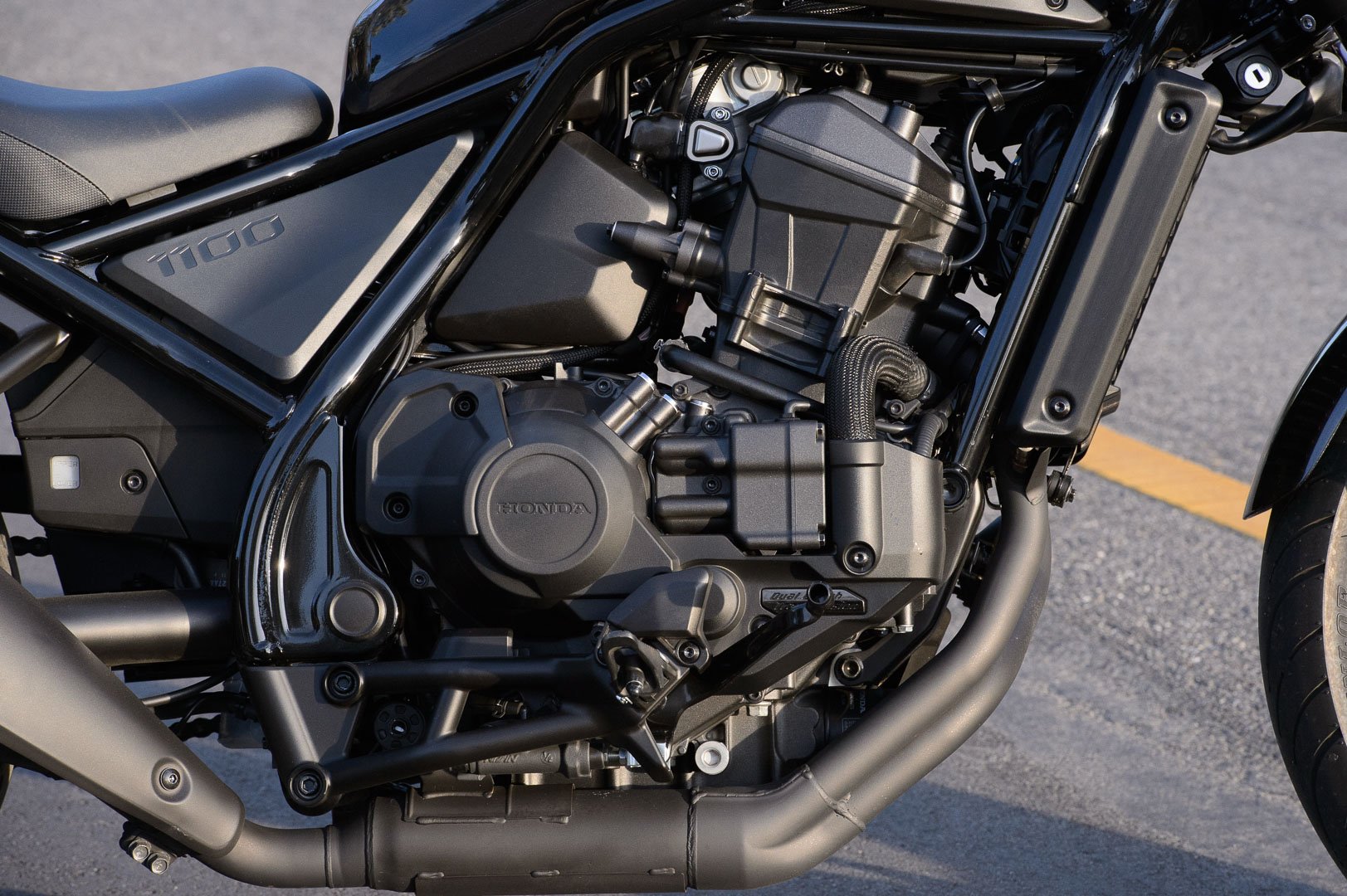 7. With high speeds must come effective braking. Honda wanted to keep the Rebel’s spare look, so the engineers went with a single front disc. However, that’s a huge 13-inch disc and a radially mounted four-piston monobloc caliper. The back wheel gets a large 256mm caliper, and both ends have fat tires with substantial footprints on the pavement.8. Riding around town, I keep my hands on the grips and use the rear brake almost exclusively—it’s that powerful. Sure, you want the front brake to be there when you need to stop unexpectedly. However, you can easily ride all day in the city without actuating a hand lever. Of course, out on the twisties, such as Mulholland Drive through the Hollywood Hills, it’s time for the front brake to earn its keep, and it does so without misbehavior. Pad-to-disc engagement at both ends is smooth and predictable, ramping up linearly as you add pressure.9. Even on the brutally mismanaged streets of Los Angeles, the 2021 Honda Rebel 1100 doesn’t lose its composure. Potholes and ripples are nicely managed by the Rebel 1100, as it has almost four inches of wheel travel in the back and nearly five inches of fork travel—plus the chubby Dunlops suck up some road indignities. This is another place you get an upgrade from the smaller Rebels, which use thinner fork tubes and less sophisticated twin shocks. Suspension adjustment is pre-load only at both ends, and that’s fine. The suspension is tuned correctly at the factory. 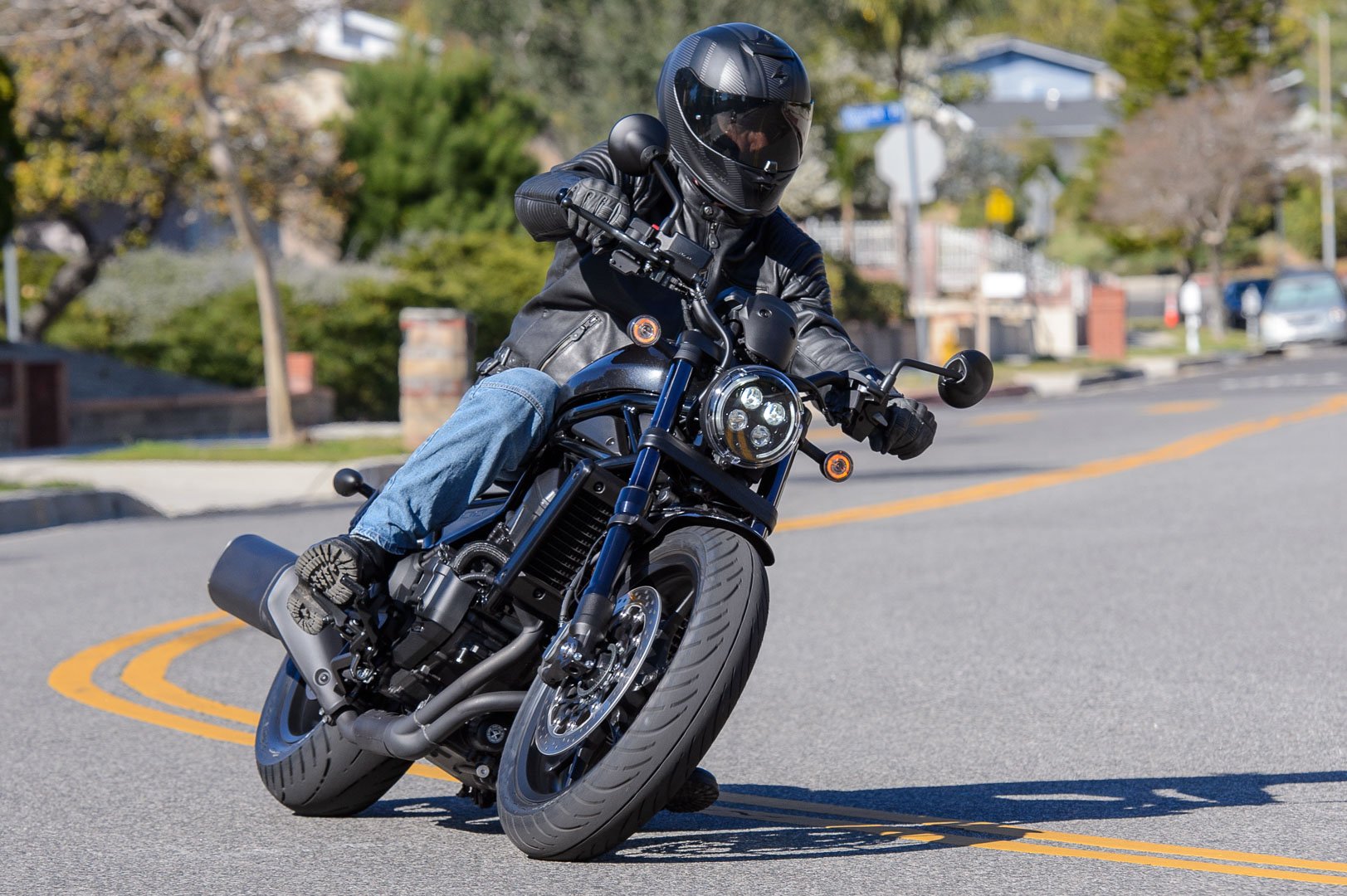 10. The Rebel 1100 DCT has a sporting side. With a standard-style seating position, the Rebel 1100 feels natural when riding aggressively in the canyon. Cornering clearance is quite good, with the Dunlop D428 tires giving you confidence all the way until your heel touches down when heeled over at speed. With the high-profile tires, the Rebel 1100 is more about stability than agility, yet it doesn’t require undue effort to turn. The DCT will occasionally shift at an inopportune moment, so the most sporting of its riders will manually shift instead.11. Shifting on the DCT is a constant work in progress. Honda has been in the motorcycle DCT game since the 2010 VFR1200F. It is continuously refined and has significantly improved over the past decade. The 1100 DCT will work flawlessly for all but the most demanding riders. From your speed and throttle position, the system knows when you’re riding hard and responds accordingly. When you’re cruising, it’s cruising. Add in the ability to adjust the shifting aggressiveness, and the result is a transmission that welcomes new riders into the fold and makes life easier for the seasoned crowd. The hardest thing for experienced riders to remember is to see the parking brake.12. Honda gives the Rebel 1100 DCT a definite steampunk styling slant. It’s an appealing mix of retro and futuristic. The DCT lump on the right side only adds to that steampunk look. While many think of belt drives when cruisers come to mind, Honda stuck with the classic chain drive. Metallic Black is the way to best enjoy the era-undetermined look, with the Bordeaux Red Metallic paint option for those who like to make a splash. Other favorite styling touches include the round LED headlight, twin piggyback-shocks, lightly adorned radiator, and overall blacked-out countenance. The solo seat looks purposeful, with a pillion and passenger pegs available as an option. If you think the muffler seems a bit lumpy, and it does, check out the Vance & Hines Upsweep Slip-On as a replacement. 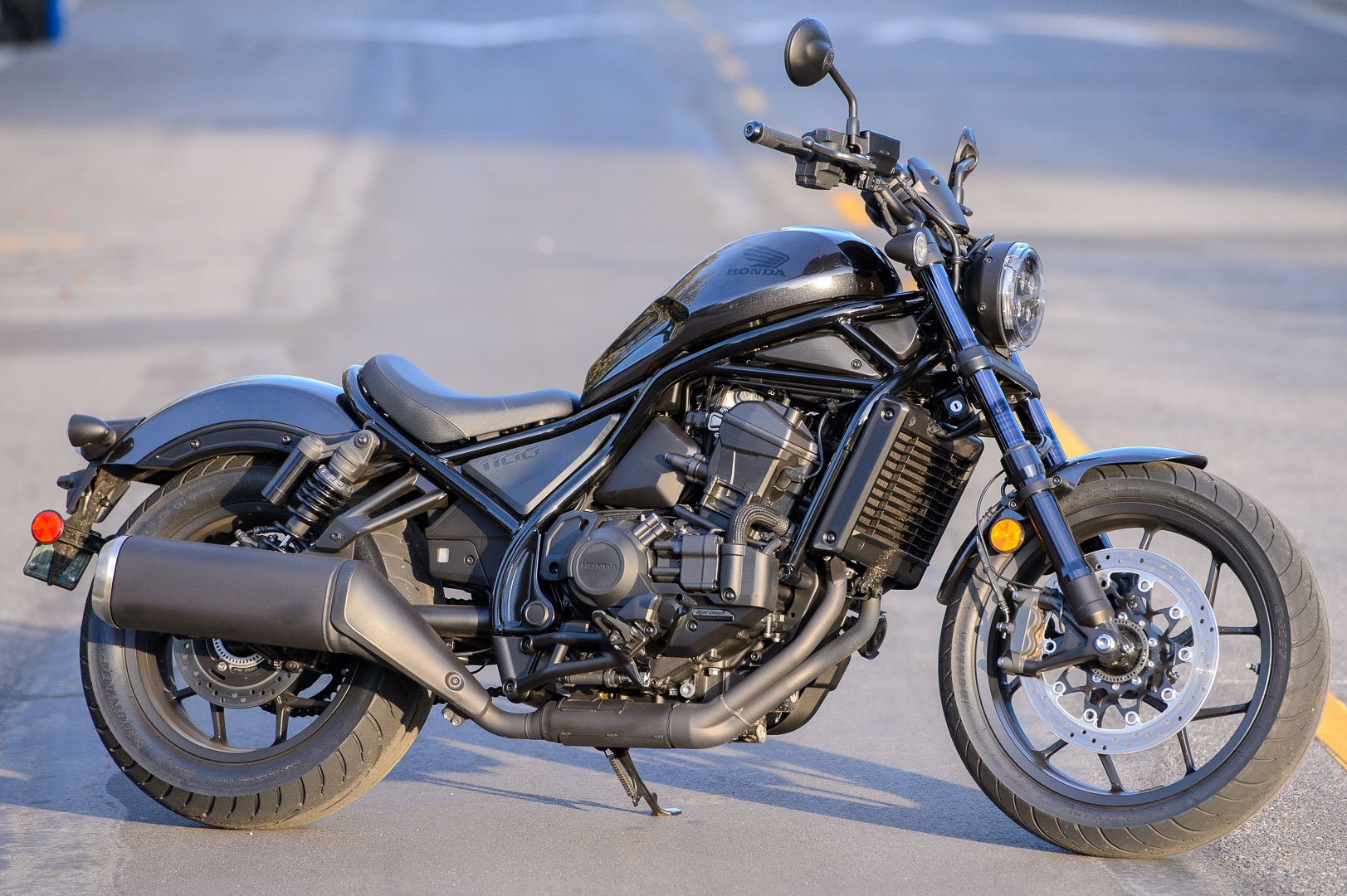 13. The 2021 Honda Rebel 1100 DCT is a remarkably likable motorcycle. The Rebel 1100 DCT makes itself so easy to ride that it is hard to not appreciate its efforts. It looks and sounds cool, and will catch a sport rider out if he’s not giving your mount due respect. To get all this fun, style, performance, and convenience for under $10k is just icing on a well-constructed cake.Photography by Kelly CallanRIDING STYLE