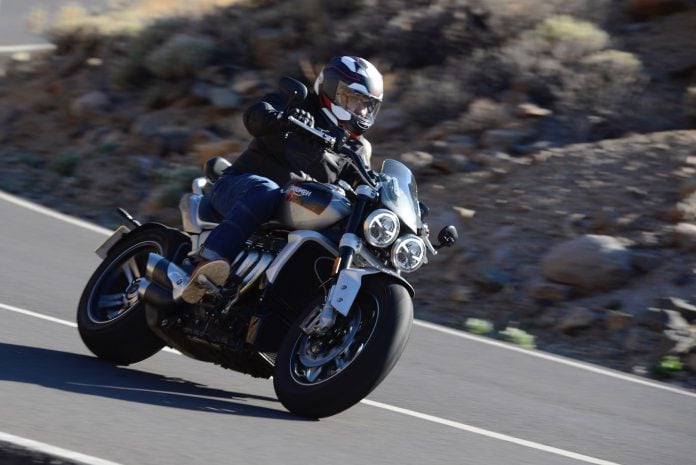 Most cruisers bore me.I struggle with handling and power issues on most, though these laidback machines have gotten much, much better over the past decade.Heading into 2020, very few stick out among the noise. The 2020 Triumph Rocket 3 is one of these. This bike hauls ass and handles like no other power cruiser. I’d argue it handles better than the Ducati XDiavel, and I love that devil of a twin. 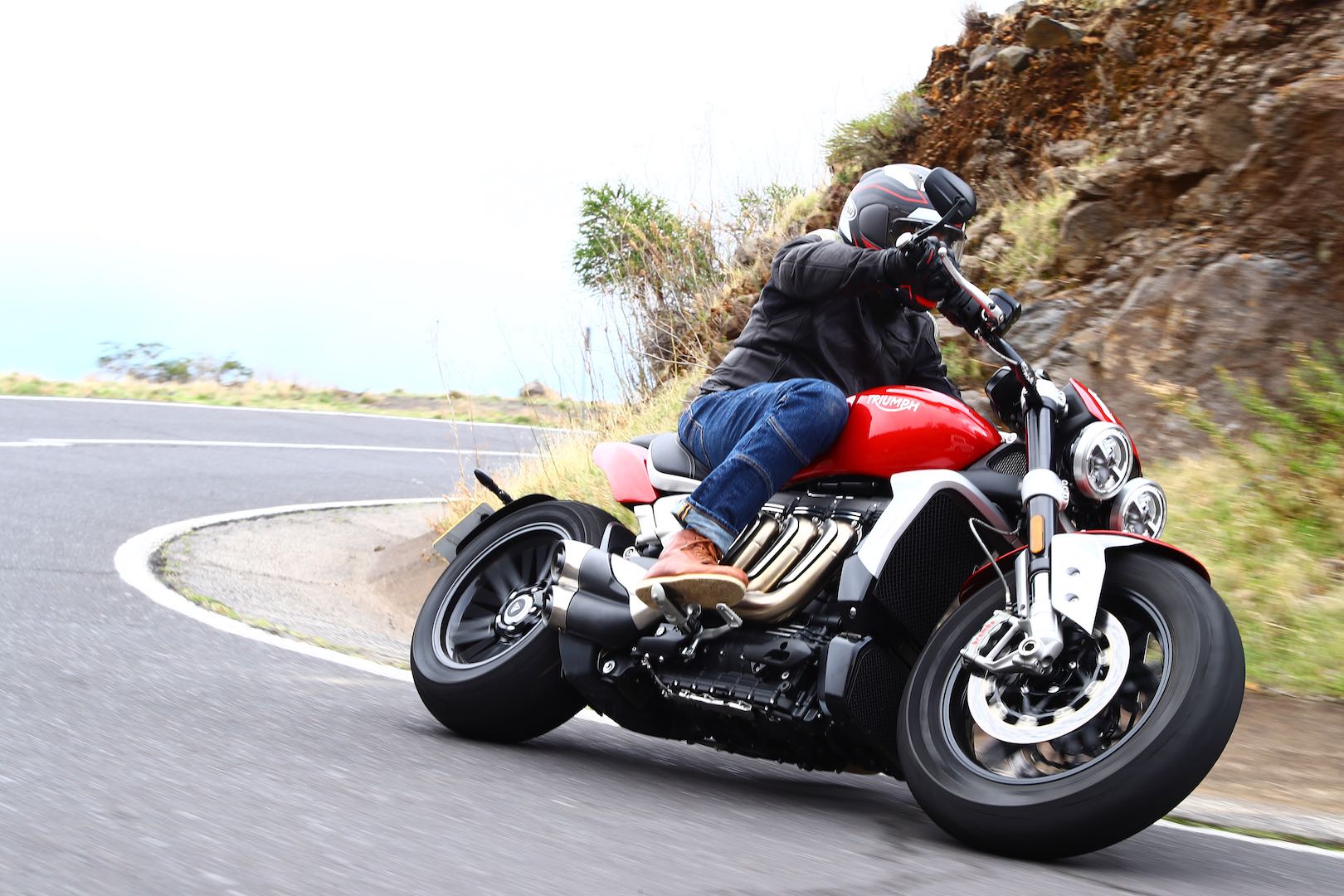 The 2020 Rocket 3 is completely revamped over the previous generation, featuring a larger (yes, larger!) engine and chassis tweaked for serious performance. And the look—it simply works for me in every way, especially the R model.Yes, Triumph offers two flavors of the Rocket 3—the R and the GT. Got speed in the brain? Take the R for a rip. Want to go the distance? Tour aboard the GT.The only thing setting these two Brits apart are the handlebar, foot controls, windscreen, rear seat, and aesthetics. The GT also has heated grips, which are optional on the R.That’s it. But what a difference those changes make, which I discovered rather quickly while testing the two motorcycles on Tenerife, Spain’s largest Canary Island.Before my debut ride, Triumph’s Head of Brand Management Miles Perkins told me the new Rocket 3 is “All day, any gear, any ride.” Was this sentiment true?This is a cruiser, so I’ll start with sound. The exhaust looks the part of a power cruiser, and sounds the part. At idle, the 2458cc engine—the largest displacement production motorcycle motor—is quiet. Once you twist the throttle and move towards the 7000 rpm redline, the beast awakens and sounds mean. 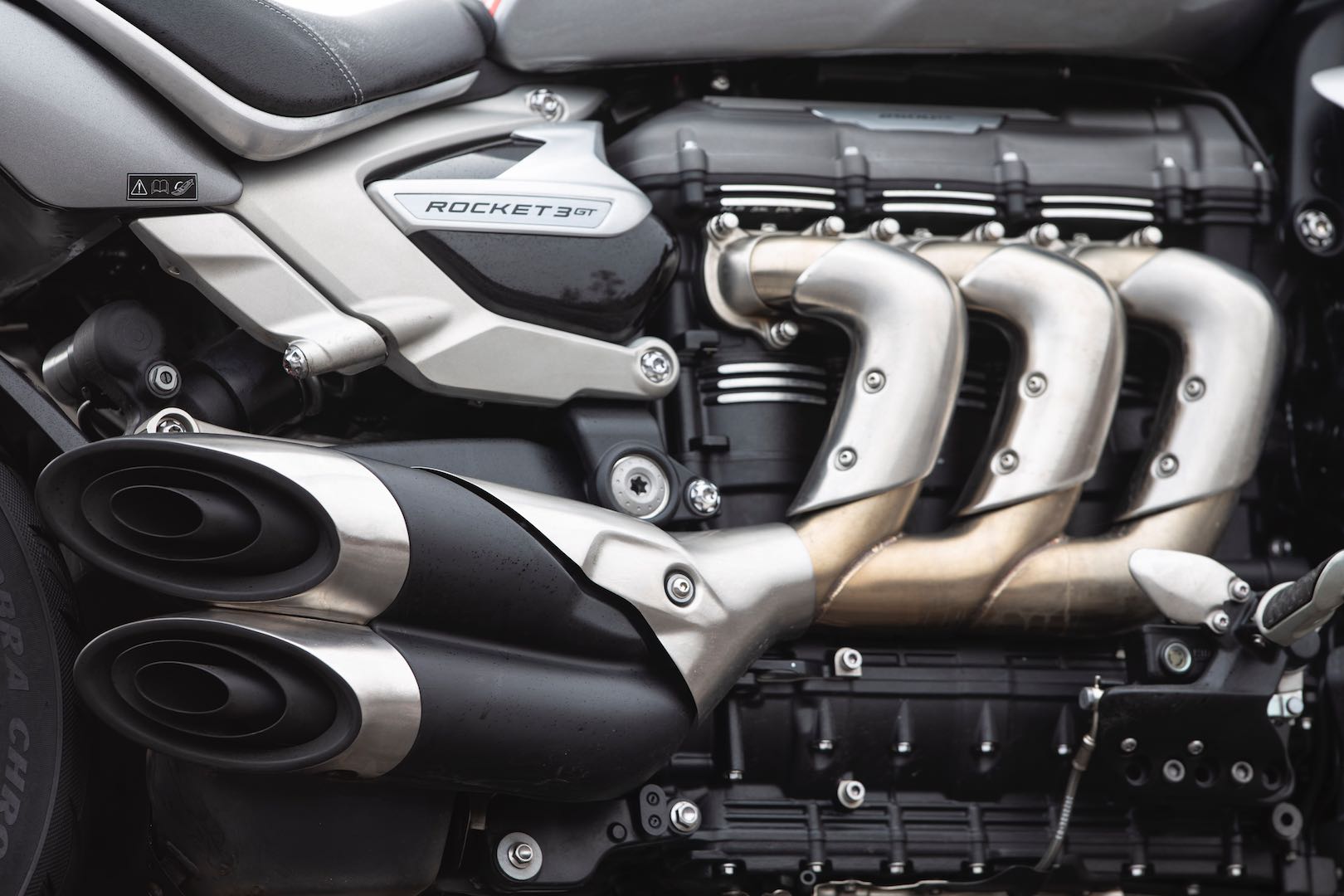 I always admired the weird left-to-right shake of a longitudinal engine when revving the engine at a stop. The violent shake prepared me for the feel of the 165 peak horsepower at 6000 rpm—up 11 percent over the previous model’s 164cc-smaller engine—and 163 ft/lbs of peak torque at 4000 rpm.The power moves the nearly 700-pound ready-to-ride Rocket 3—Triumph makes no curb weight claims—with ease. Hitting some highways towards Santa Cruz in the north portion of Tenerife, the Rocket lived up to its name. Triumph claims an 88-pound weight reduction compared to the previous generation. This is immediately noticed before the motor is started, and more so when riding. A bulk of that weight saving arrived from a 40-pound lighter engine and chassis.The genius of the engine is not the outright power, but rather the linear torque curve. Over 150 ft/lbs of torque are available at 2500 rpm, and builds evenly to the 4000 rpm peak. The torque remains strong until descending just before the redline.I allowed the engine to chug down to 1000 rpm in sixth gear, and the throttle still picked up with a respectable response. Generally, I only hit sixth gear on the highways when checking some top speeds—over 125 mph, easily.When I got deep into some of Spain’s gnarliest roads—either above the clouds or along black lava rock from the multiple volcanoes—second and third gear fueled my smiles. I bounced the rev limiter in both cogs, aggressively shifting between them to utilize all that torque. The light one-finger pull on the clutch lever made the process effortless.Aiding in the smooth gear changes was the new assist, though not slipper, clutch. Although I didn’t test the Shift Assist option for clutchless up/downshifts, I would definitely take advantage of the $320 option. Speaking of the transmission, hill assist is standard on both models. 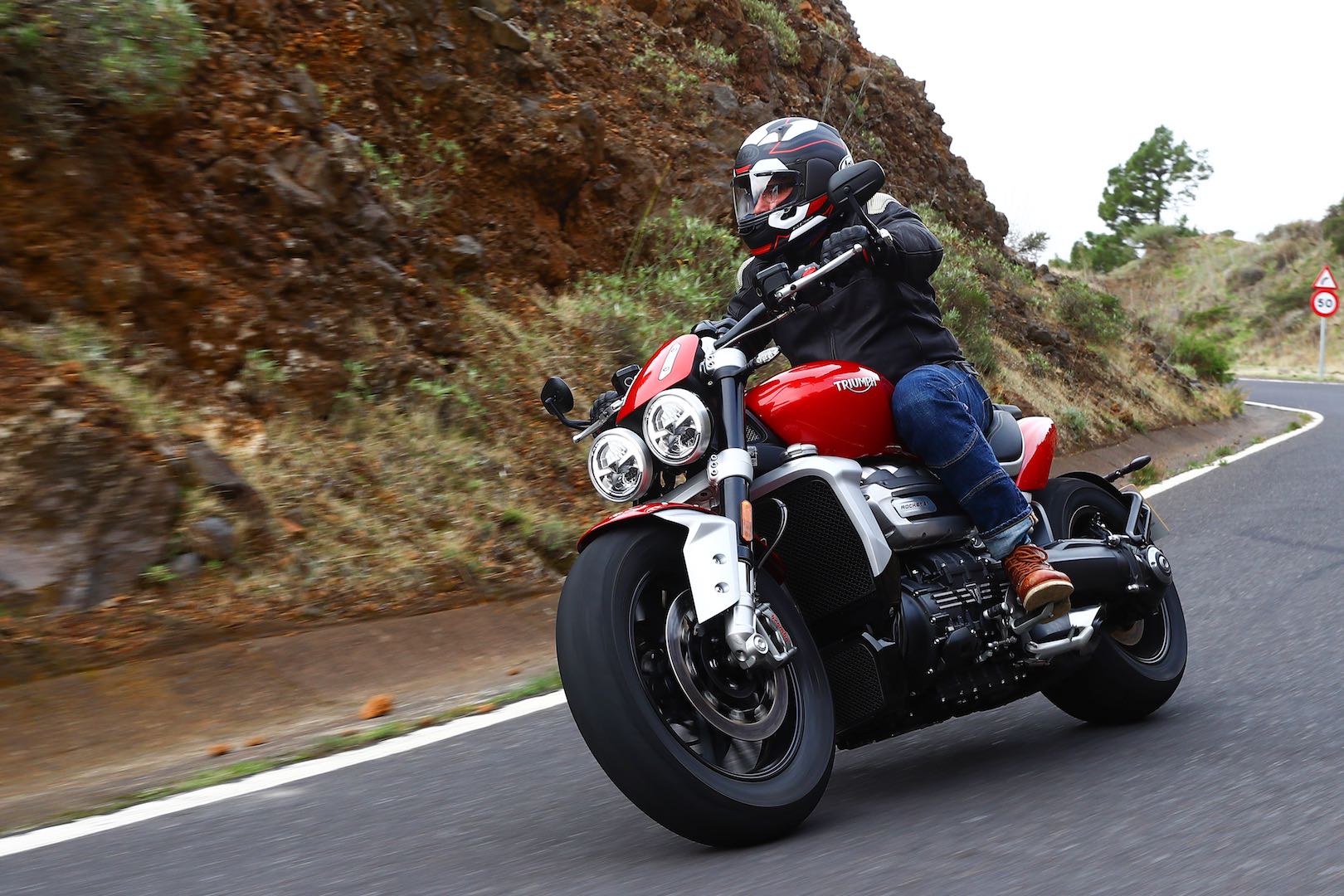 My aggressive throttle hand could be why I saw the gas lights come on for both the R and GT after 80 miles or so. Under normal riding, the Rocket 3 can achieve 150 miles from its five-gallon fuel tank—Triumph claims 32 mpg). Use of the taller fifth and sixth gears also helps reduce fuel consumption.A virtually zero-maintenance shaft drive—aluminum, like the frame, to save weight—gets the power to the ground. This shaft lives inside a gorgeous single-sided swingarm.Though it has that intimidating look, the Rocket 3’s weight is distributed evenly, so it is not top-heavy as it would appear while looking at the seamless gas tank with a belt across the top. This weight distribution aids handling and stability, as does the redesigned chassis, which was also updated to sharper 28-degree rake, compared to 30 degrees on the 32 on the previous-gen Rocket.Almost fully adjustable Showa suspension complements the upgraded chassis, with the Rocket 3 featuring a 47mm fork (no spring-preload adjustability) and a piggyback-reservoir shock. The suspension offers 4.2 inches of travel up front, and a generous 4.7-inches out back; I expected a super-soft ride and slow recovery over bumps. I was proven wrong.The Rocket 3 remained stable around some of Tenerife’s bumpier corners, and the chassis recovered quickly after I purposely upset the suspension via brakes and throttle mid-corner. Though a bit too soft for my riding style—I didn’t play with adjustments during the ride—I welcomed the comfort while cruising. Although my lower back dislikes many cruisers after about 50 miles of travel, I rode seven hours on the Rocket 3 without any comfort issues.To my surprise, the handling is unbelievable for such a massive beast, even if the stock Avon Chrome tire sizes are a unique combination of a 150/80 x 17 and massive 240/50 x 16. You need to scrape a few millimeters off the peg feelers before truly reaching the edge of the tire, although Triumph engineers say another two degrees are remaining after those feelers are worn out. 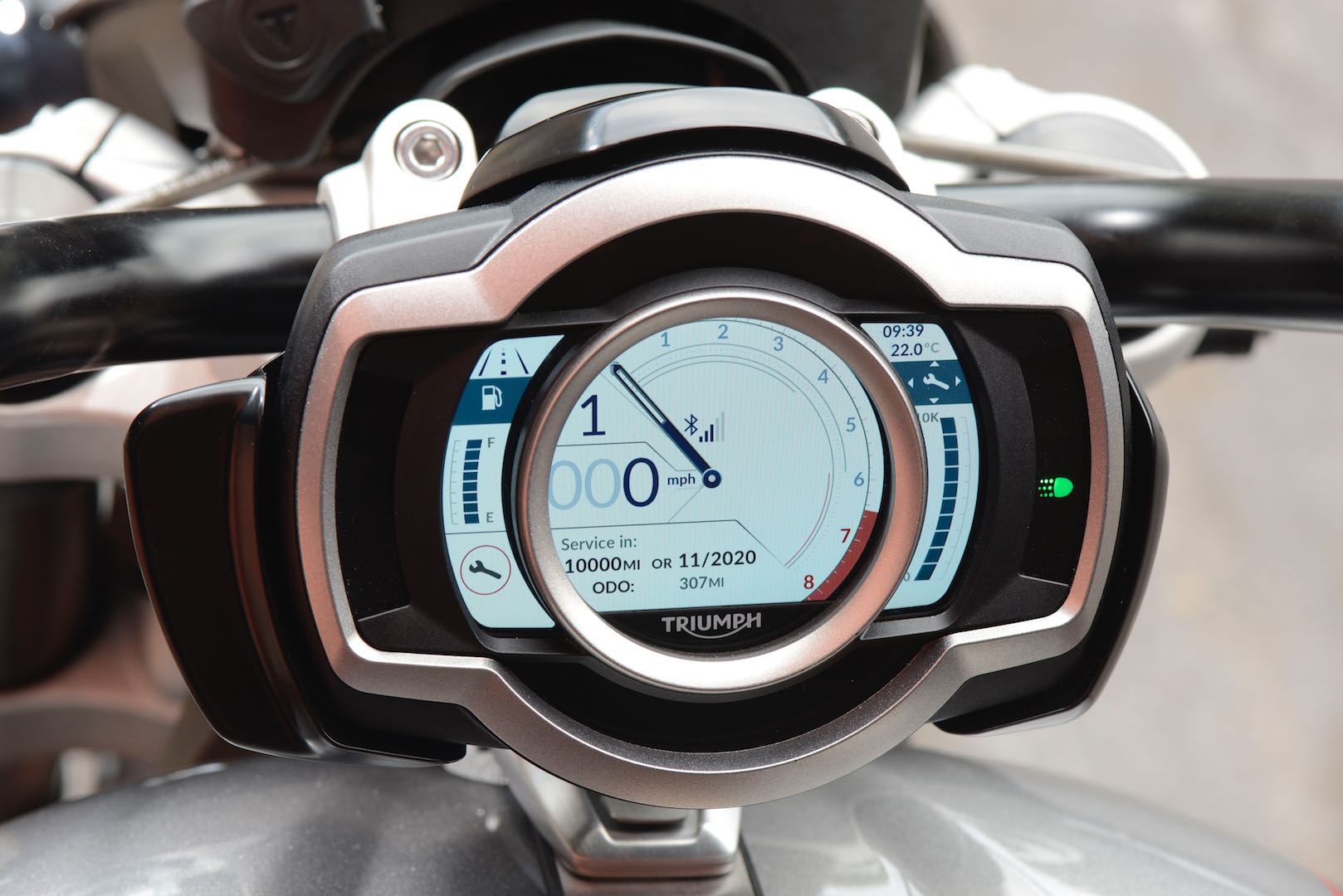 The electronics are plentiful. The four power modes—Road, Rain, Sport, and customizable Rider—are adjustable while riding from an easy-to-use toggle switch on the left controls. The full-color TFT dash makes monitoring the changes easy. Triumph also wisely placed the dash on a pivoting mount for a tool-free angle adjustment while riding. Blinding sun glare is averted with ease!I used Sport most of the day, and Road and Rain modes on some of the damp sections above the clouds around Tenerife. I also created a custom map that turned off traction control and ABS. That allowed for a bit of sliding around the volcano-side roads.A five-axis IMU allows for cornering ABS and cornering traction control, and both provided more confidence. I purposely stabbed at the brakes and goosed the throttle when heeled over, and the bike remained stable. You can feel the ABS intervene under extreme conditions. I did mockup an emergency stop at 100+ mph using various combinations of the brakes, and the Rocket 3 remained straight and stable before coming to a complete stop.Again, due to the intimidating enormous look of the Rocket 3, the TC and ABS performances impressed.The Brembo Stylema brakes, typically used on high-performance sport bikes, worked as Brembos should. I used one finger throughout the day, which included much trail braking. I also used the rear brake to keep the chassis even through some corners. I did feel some brake fade out back after one hour-long run of spirited riding, but I couldn’t imagine this happening during everyday riding styles. 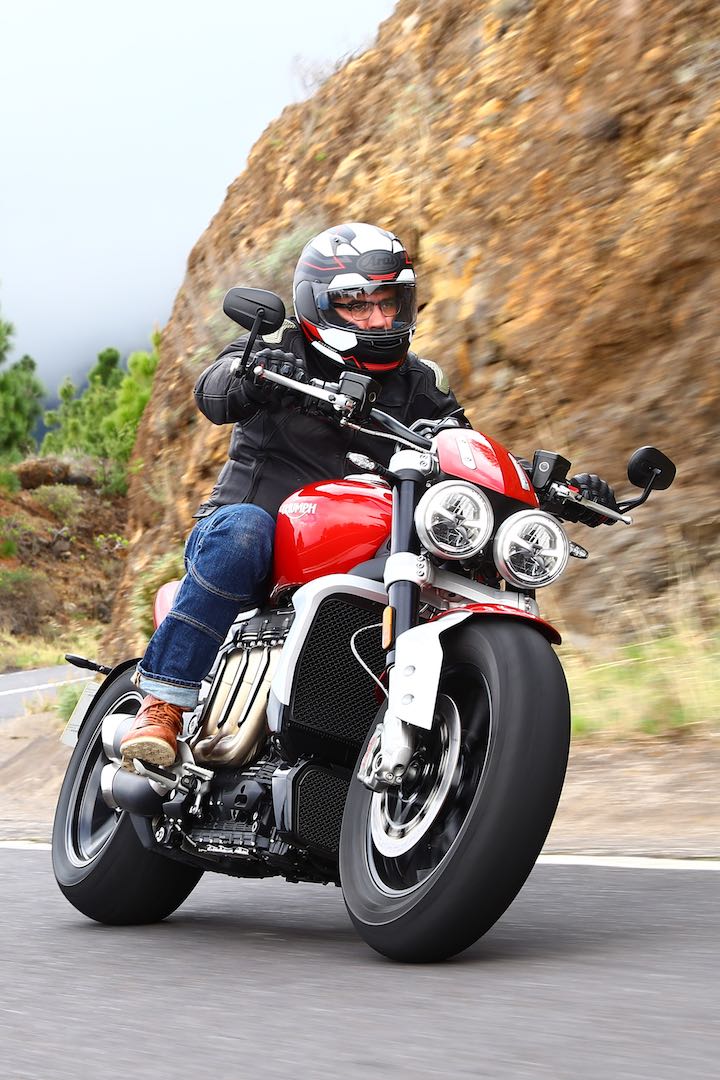 The setup is typical of many of the world’s leading sportbikes—dual 320mm discs up front squeezed by four-piston monoblock calipers, and a single 300mm disc out back modulated by a single four-piston caliper.As I said above, I had zero comfort issues while riding throughout the day. This included some aggressive sporty riding to some highway cruising. The ergonomics felt personalized for my nearly six-foot body. I do prefer the laidback handlebars on the GT over the R’s flatter bend. However, I disliked the GT’s forward pegs, as I am not a heel-in-the-wind type.I would take GT’s handlebar and larger windscreen and transplant them on the Rocket 3 R. The R’s pegs have two positions—standard, and dropped down 0.6 inches. The GT allows horizontal movement—a standard position, and backward or forward an inch. All tools for adjustment are included under a cover below the right side of the rider’s seat, which is only 29.5 inches off the ground. I thought it would be too low for me, but I was proven wrong again.Other comfort features are cruise control, keyless ignition, and heated grips that are standard on the GT but optional on the R. The cruise control allowed for smooth speed changes, and the heated grips have three settings. As for the key fob, it’s typical of an automobile’s—bulky. I can’t wait until technology slims these down.I like to ride motorcycles that are as appealing standing still as they are in motion. The Triumph Rocket 3 appears in constant movement due to its sharp lines and various styling attributes. A few of my favorites are the GT’s black/machined 20-spoke rims (R’s are all black), the single-sided swingarm, the belt along the top of the gas tank, the clean license-plate holder attached to the swingarm, and the gorgeous twin LED headlights. As for colors, the red talks more than the silver or black. 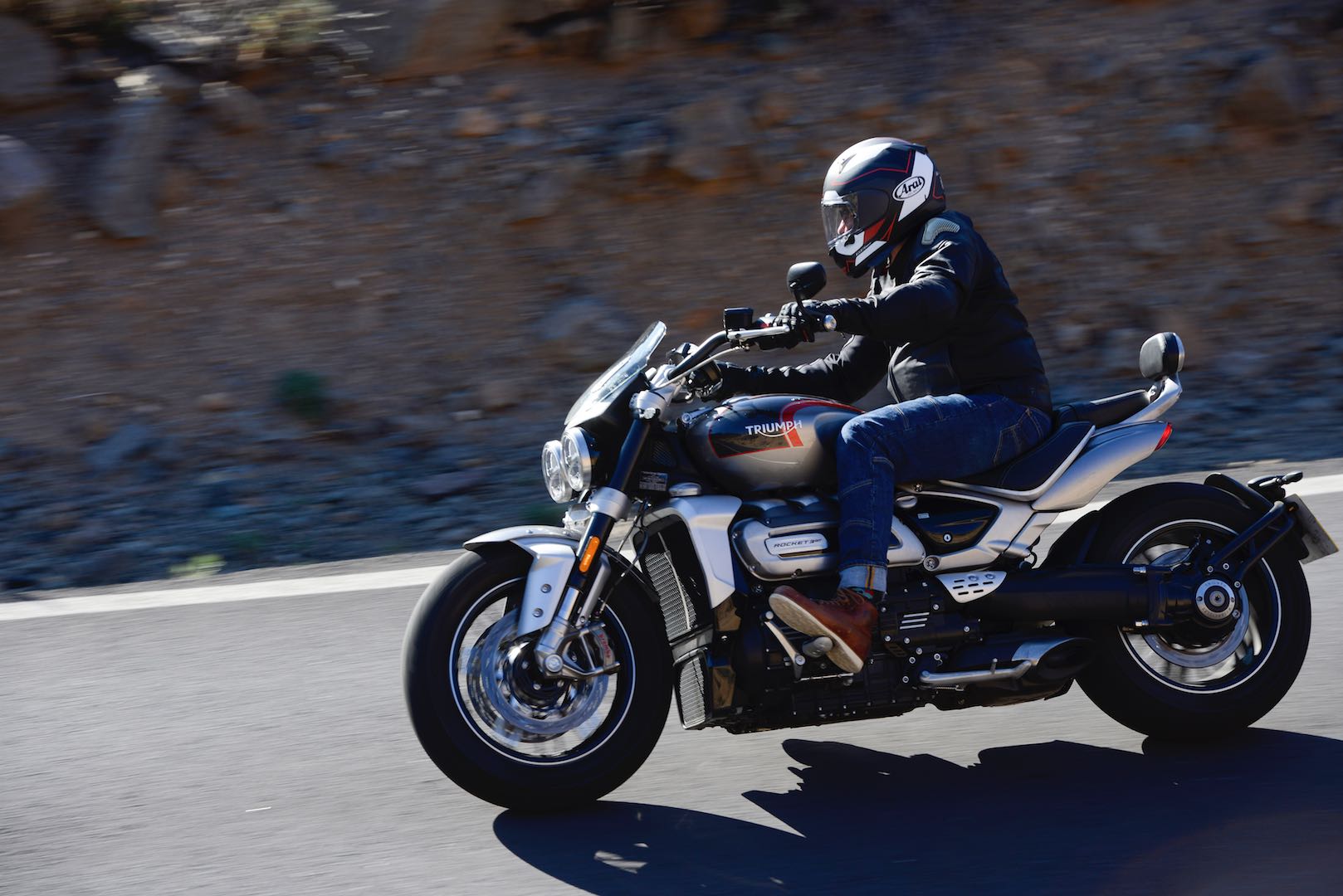 Triumph also hides wiring in the handlebar, and the passenger footpegs fold into the bodywork. It’s genius, clean, and I’m expecting this to become a trend across the industry.Technology-forward accessories include two that are so far exclusive to Triumph—an integrated GoPro control system that allows you to control the camera from the bike’s controls while displaying everything on the dash, and Google-powered navigation. Also, a tire pressure monitoring system is available as an extremely useful $260 accessory.The previous generations appeared as experiments in style with some bragging rights as building the largest capacity motorcycle engine. After seven years of exhaustive research, Triumph launched the Rocket III for the 2004 production year. Though various variations were released—the Classic, Roadster, and Touring models—the motorcycle’s chassis and engine remained relatively unchanged. The 2020 Triumph Rocket 3 changes this history drastically.I would have never considered Triumph’s hog-like Rocket III of yesterday, but the 2020 Triumph Rocket 3 R with the handlebars and windscreen of the GT would be my number-one pick for a power cruiser purchase in 2020. That setup would more than suffice. And then some. 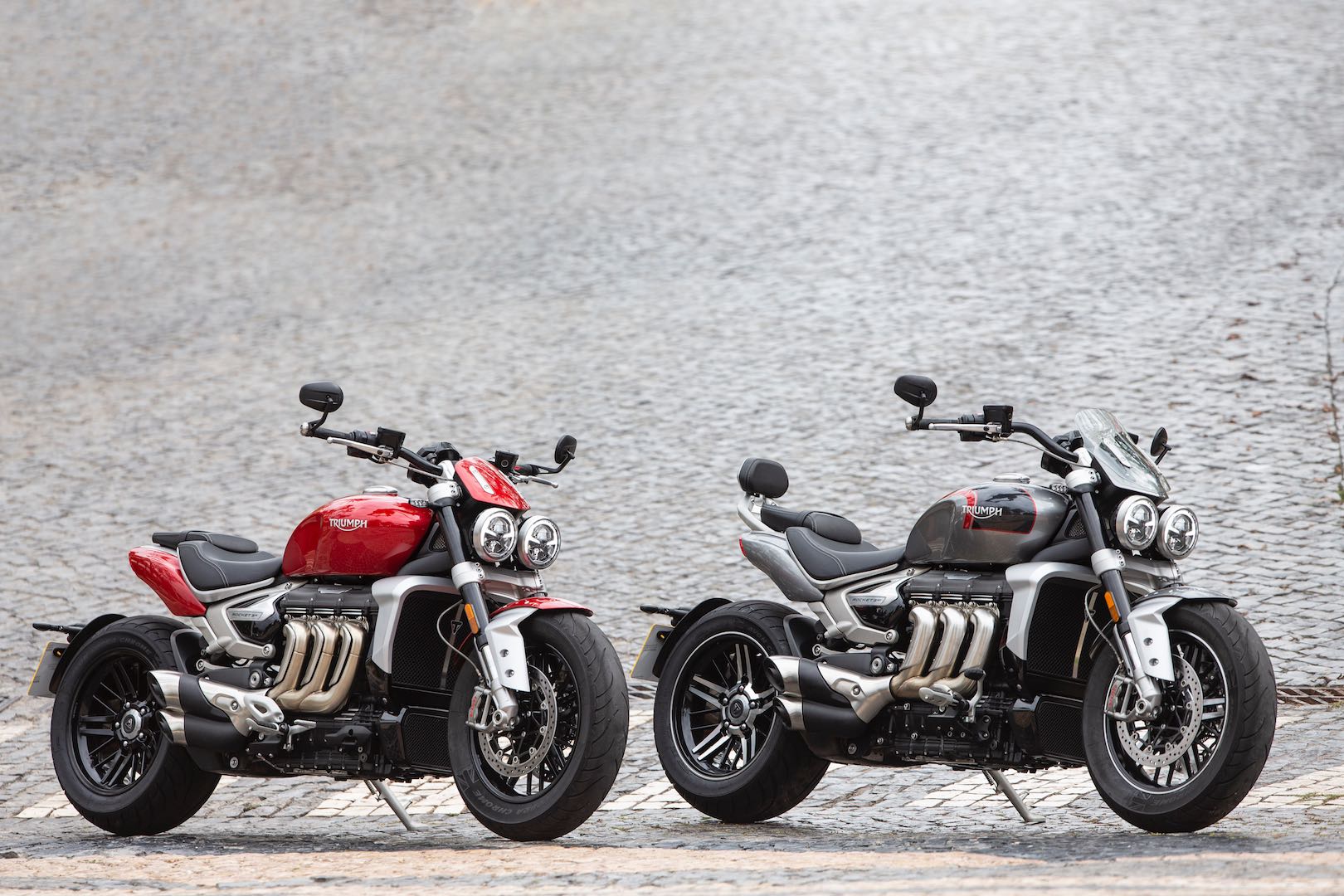