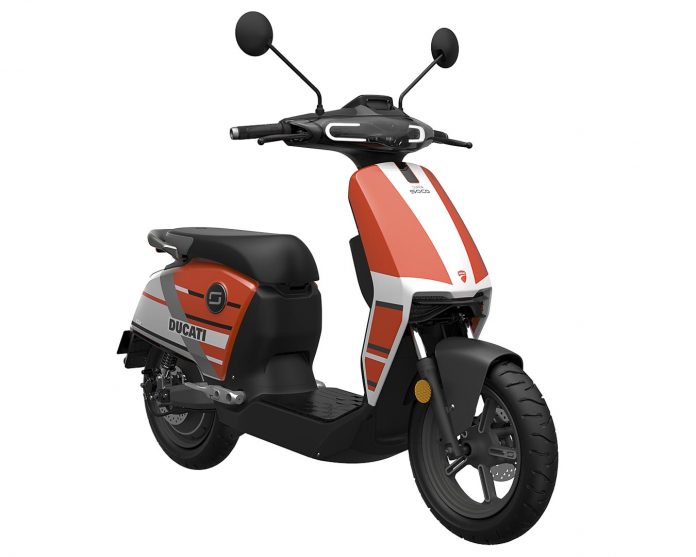 You probably never thought you’d see a Ducati scooter. Yet, there is a scooter in the photos with Ducati V4 S Corse livery. It turns out, Ducati issued a license to Chinese industrial giant Vmoto Limited, which makes Super Soco electric scooters. The result is the Super Soco CUx Ducati Special Edition electric scooter, with livery created by Super Soco. 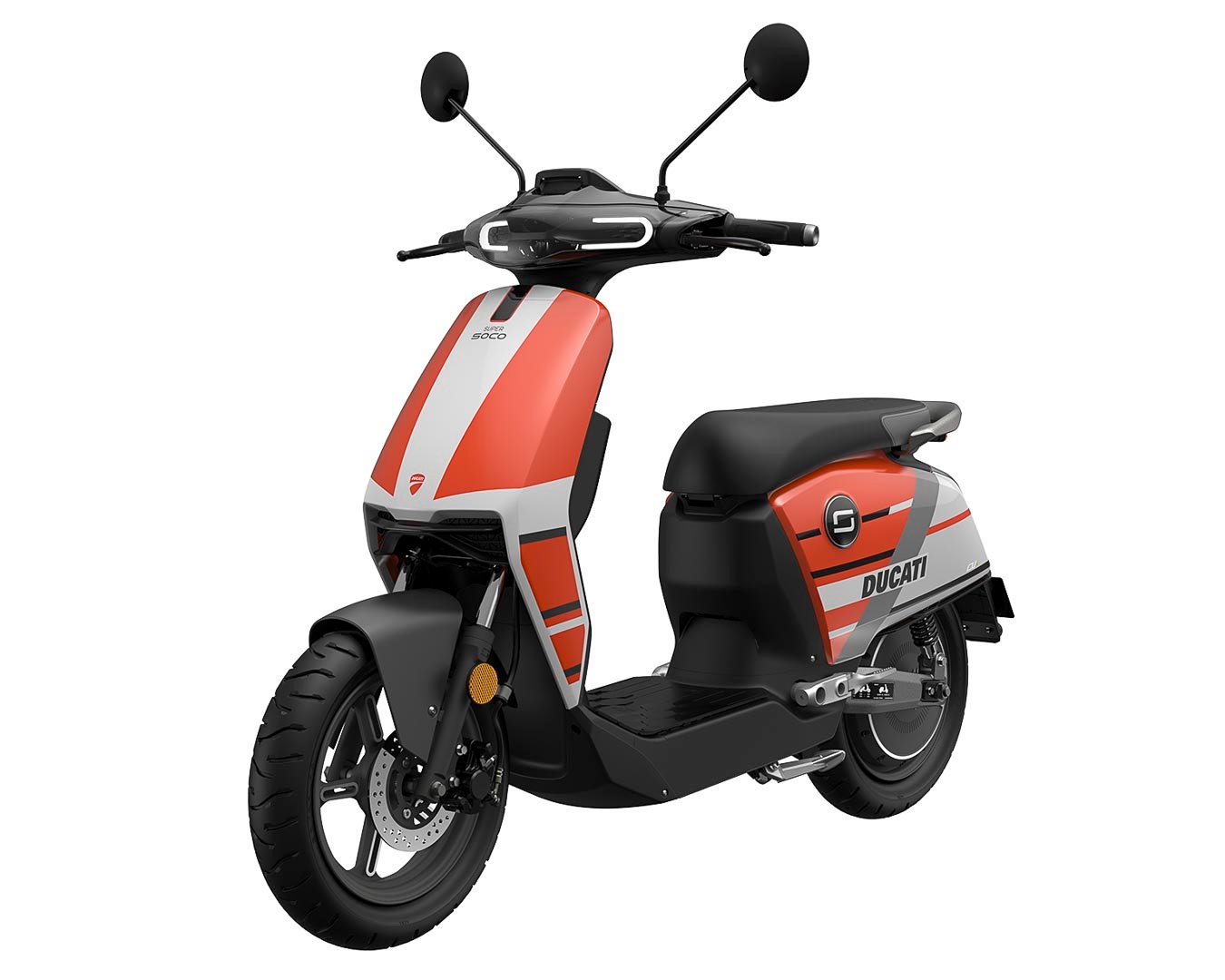 The origin of this Ducati scooter is the Race of Champions at World Ducati Week 2018. Vmoto supplied electric scooters for the event, and a deal was brokered between Vmoto and Ducati. The hook was that the VMoto was a Green Official Supplier for what was billed as an ISO 20121 sustainable event—the only motorcycle event of its kind.“This year in Europe alone, Vmoto Soco will sell around 15,000 motorcycles,” according to Graziano Milone, special attorney for Vmoto Soco Limited and a co-director of Vmoto Soco Italy. “However, we need to expand our base of potential customers, and to do so, we must reach those people who are not yet interested in electric vehicles.“We are engaged in co-branding operations, such as the one that saw our CUx in the Ducati livery. We are happy, for example, to consolidate the collaboration with our dear friend and Super Soco world brand ambassador Dario Marchetti, formerly a Ducati world brand ambassador, who helps us to make our presence felt by professional dealers, and who tests our vehicles on the road based on his long experience as a professional rider.”The Ducati scooter is the same vehicle as the standard Super Soco CUx. It uses a 1600 W Bosch electric motor with juice from an underseat 60 V, 30 Ah lithium-ion battery. Top speed is limited to 28 mph, and the range can approach 45 miles. A standard outlet will charge the battery from zero to full in about seven hours. The charge time can be cut in half with the optional fast charger. Steep hills are kryptonite to electric vehicles, and the CUx is limited to 15-degree grades or less. 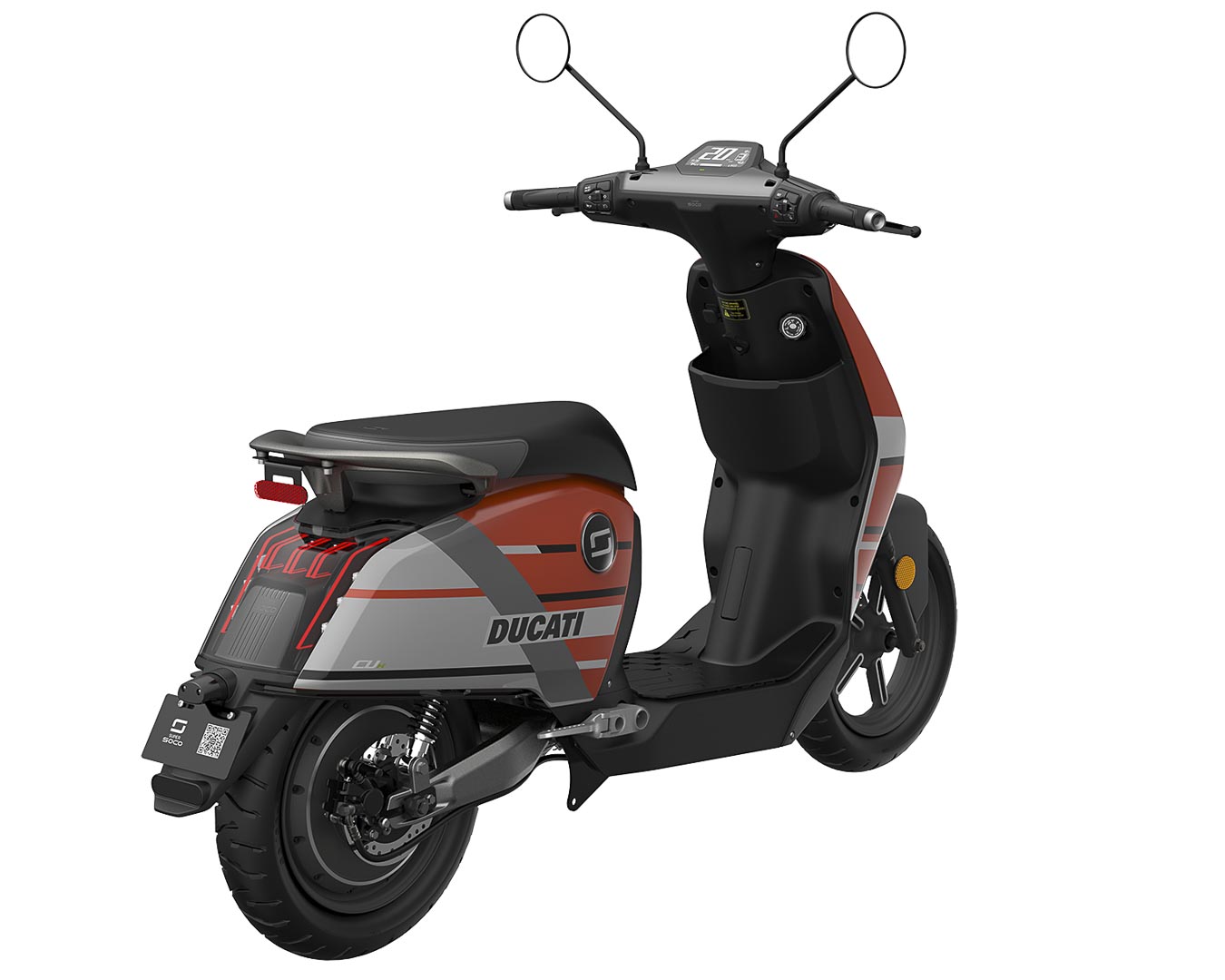 The chassis uses a single cradle steel tube frame and 12-inch wheels with 90/90 tires. The suspension is non-adjustable, with a fork and twin shocks, both with hydraulic damping. There are 180mm discs on each wheel. The curb weight of the Super Soco CUx Ducati Special Edition electric scooter is 150 pounds.It shouldn’t surprise anyone to see a scooter with the Ducati name on it. In Europe, you can buy a Ducati MIG-RR e-bike, which is made by e-bike manufacturer Thok.Milone is proud of the Super Soco brand. “They are not the usual electric scooters,” he says. “Vmoto Soco has always produced only high-quality electric vehicles. Its managers and engineers have a strong motorcycle background in mature companies like Honda Motor.” That’s definitely a high standard to live up to, and one you would expect if Ducati is licensing its name.The Super Soco CUx Ducati Special Edition scooter has an MSRP of €3090, which is €200 more than the standard Super Soco CUx. We’d cut loose with that extra cash in an instant for a Ducati scooter.