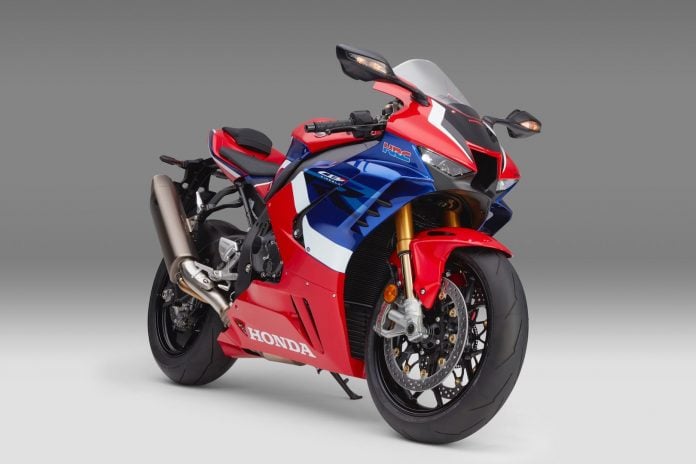 Honda has just unveiled the latest iteration of its legendary CBR superbike—the 2021 Honda CBR1000RR-R Fireblade SP. The track-ready Fireblade SP is a from-the-ground-up redesign of Honda’s superbike platform, which saw its last significant update in 2017.Simultaneously unveiled by American Honda in Torrance, California, and at the 2019 EICMA show in Milan, the 2021 Honda CBR1000RR-R Fireblade SP is equipped with an all-new 999cc inline-four, claiming to achieve 215 horsepower and 83 ft/lbs of peak torque! 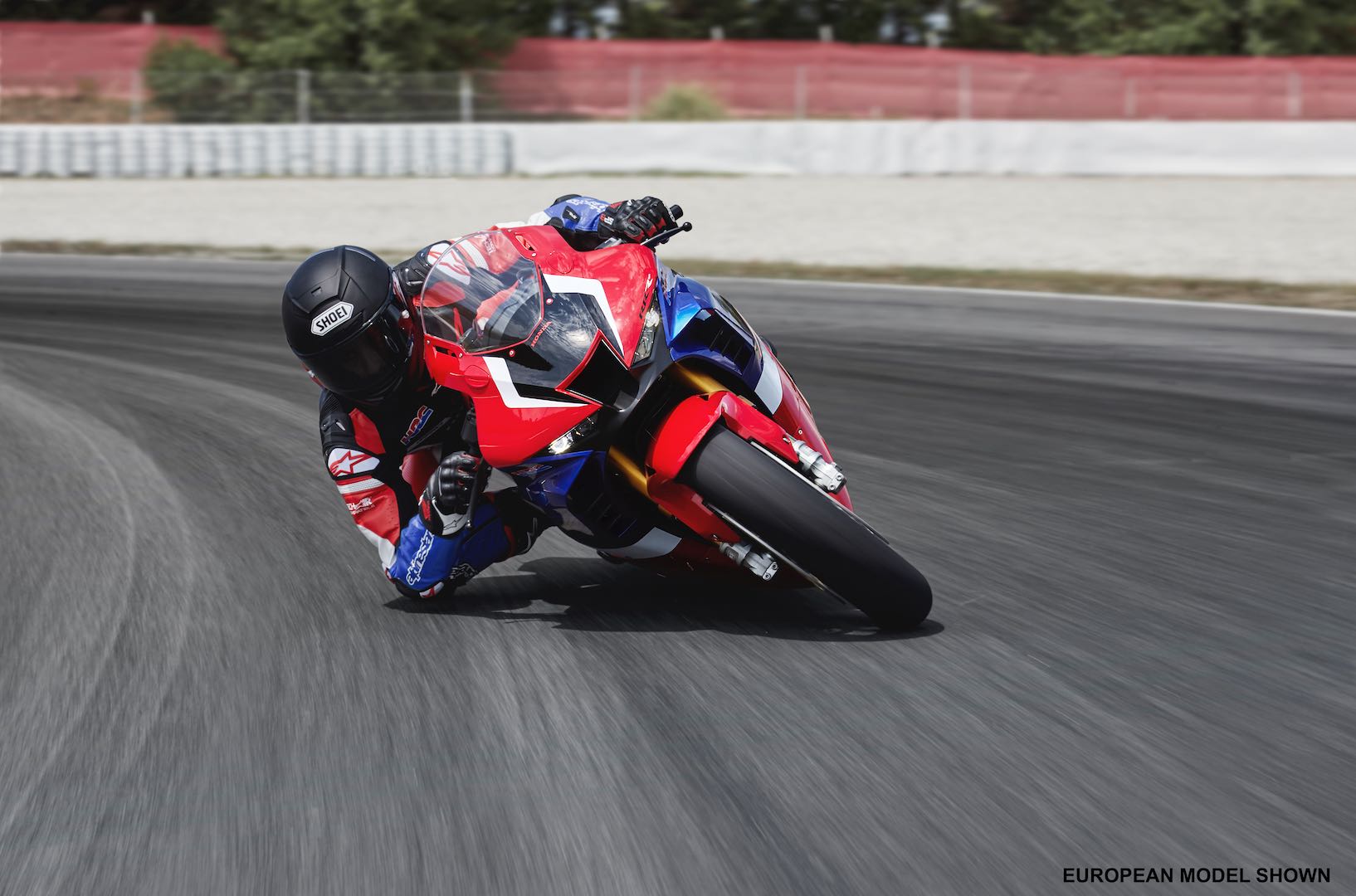 We can’t wait to ride the all-new Fireblade SP, but until then, we’ll hit you with the fast facts.1. For the first time, the US market will use the Fireblade moniker. Known as the Fireblade across the globe, the CBR1000RR has always lacked the catchy Fireblade name in the United States. Well, those days are done, and we’ll be calling the CBR1000RR-R the Fireblade. It is a 2021 model in the US market and 2020 in others.2. MotoGP-inspired aerodynamics will be proudly featured on the 2021 Honda CBR1000RR-R Fireblade SP. Seeking to improve aerodynamics, the bodywork of the Fireblade SP has been redesigned and is now equipped with MotoGP-inspired winglets capable of generating downforce at high speed.In the above video, Marc Marquez reviews the CBR1000RR-R Fireblade SP.3. The 2021 CBR1000RR-R’s motor has the same bore and stroke as the RC213V-S. That means it’s a mind-bogglingly oversquare design with the 81mm piston traveling a stroke of just 48.5mm.4. The new 2021 Fireblade is powered by a massively muscular inline-four, claiming to produce 215 horsepower and 83 ft/lbs of peak torque. American Honda does not claim performance figures. However, other markets do. Those dyno figures are impressive, but Honda is keen to point out that these numbers were achieved by utilizing what has been learned in MotoGP, through combustion efficiency and low-friction componentry. The Fireblade has lightweight pieces such as titanium connecting rods, forged aluminum pistons, and finger-follower rocker arms. The cam lobes get a DLC treatment that reduces drag by 35 percent. It seems that the Fireblade is a firebreather. 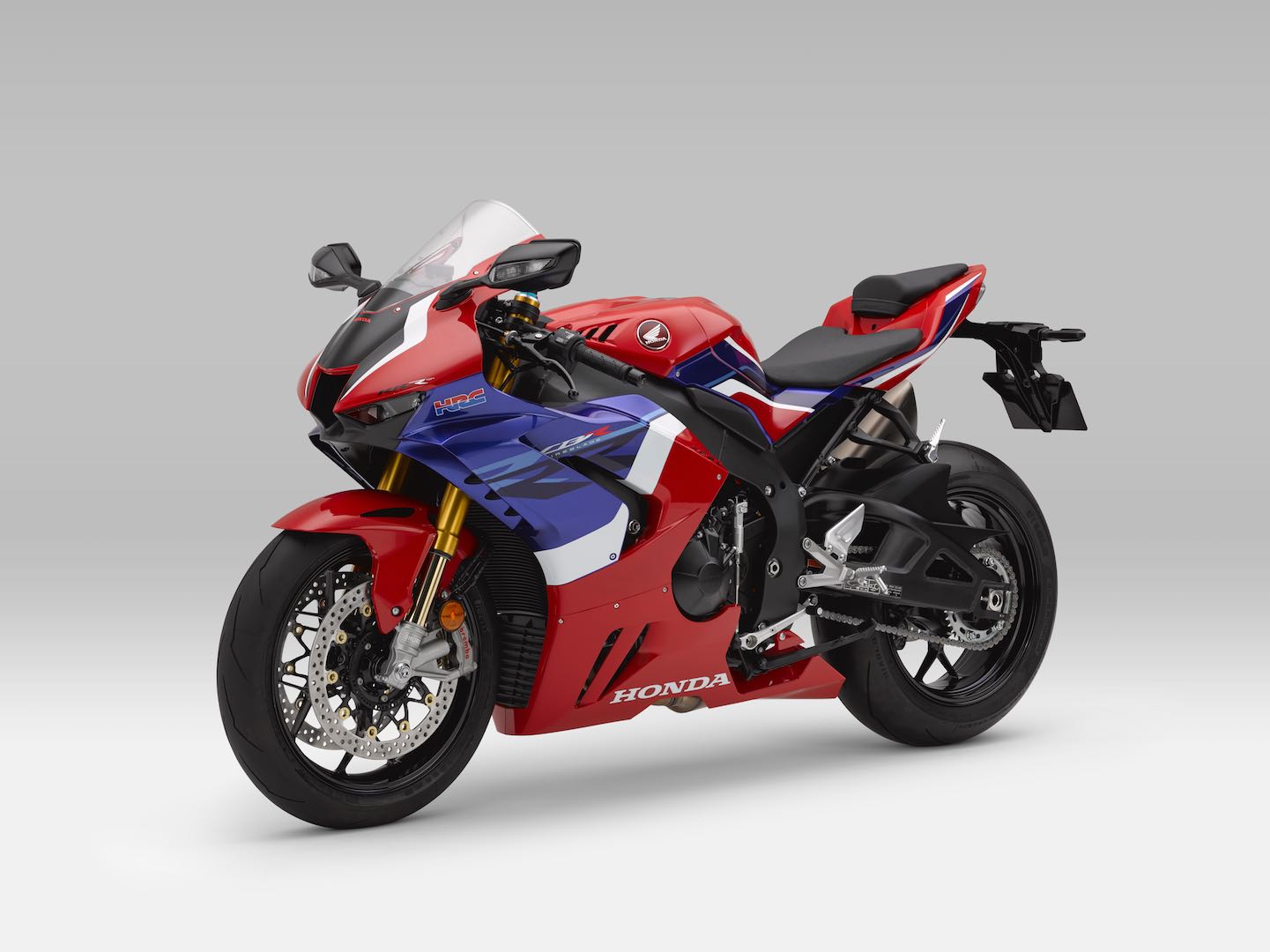 5. Honda insiders tell us that Honda stuck with the inline-four configuration because it is more mortal-friendly than the V4 used on the RC213V-S. Basically, if your name is Marc Márquez, the V4 is the way to go. If not, you are better served by the handling advantages of an inline-four.6. The ram-air intake system is seriously complex. The opening is the same size as on the RC213V-S, with various innovative methods of moving the air smoothly to the motor without upsetting the handling. The air filter has 25 percent more surface area, so lots of air is moving through the short-stroke engine. Other wizardry includes an eccentric bell-mouth funnel after the air filter that is claimed to increase intake air pressure for increased breathing efficiency. Honda even went so far as to remove the key to make more room for the air intake, replacing it with a fob—even the steering lock is keyless.7. There are 52mm throttle bodies on the 2021 Honda CBR1000RR-R Fireblade. That’s compared to the 48mm units on the RR. To keep intake pressure up, the throttle bodies have an oval internal cross-section to smooth flow.8. At the other end of the flow, the exhaust was developed in conjunction with Akrapovič. The muffler doesn’t look that unusual, but a lot is going on inside. There’s an exhaust valve to manage power across the rev range and a patent-pending valve stopper that reduces noise. There’s also a larger-diameter catalyst to keep more air moving through the system. According to Honda, the muffler’s internal volume is reduced a staggering 38 percent. 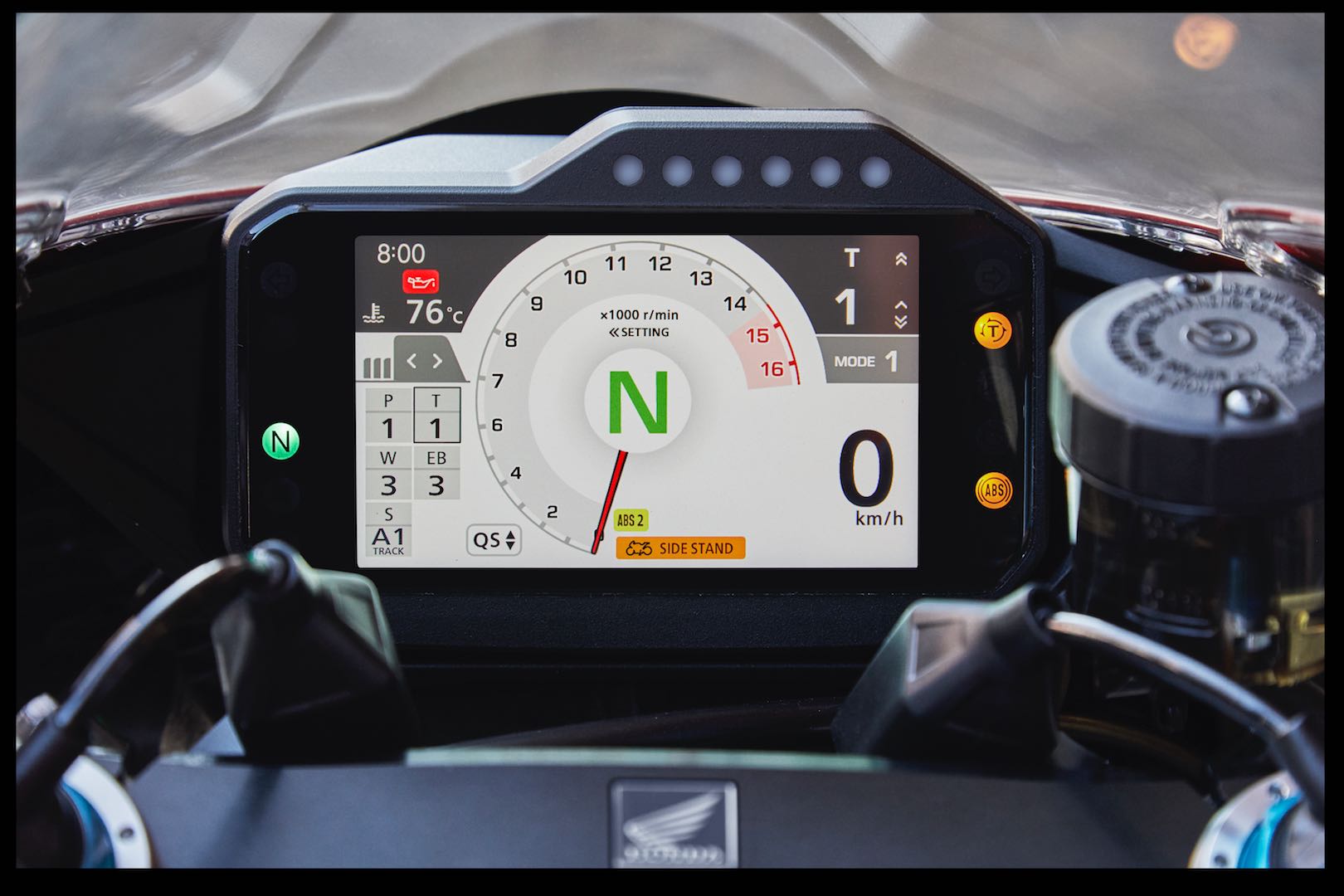 9. An all-new twin-spar aluminum frame and a 1.2-inch longer swingarm are featured on the 2021 Fireblade SP. Focused on delivering more control and feel, Honda engineers designed the new CBR SP’s chassis with higher vertical and torsional stiffness, while decreasing horizontal rigidity. The swingarms have 18 different thicknesses to achieve the flex properties Honda engineers want. Even though it’s 1.2 inches longer, the new swingarm weighs the same as the previous design.10. Chassis geometry is altered to add stability relative to the RR. The rake increases to 24 degrees from 23.3 degrees, and the fork angle to 25 degrees. The wheelbase grows to a spacious 57.3 inches over the previous 55.3-inches of the Honda CBR1000RR SP.11. The curb weight of the 2021 Honda CBR1000RR-R Fireblade SP is 443 pounds, with the 4.3-gallon fuel tank filled. 12. The seating position on the CBR1000RR-R is more aggressive than on the standard CBR1000RR. Honda is making few compromises for the street. The 2021 Fireblade is optimized for track performance with the grips moved forward, and the pegs moved up and back. 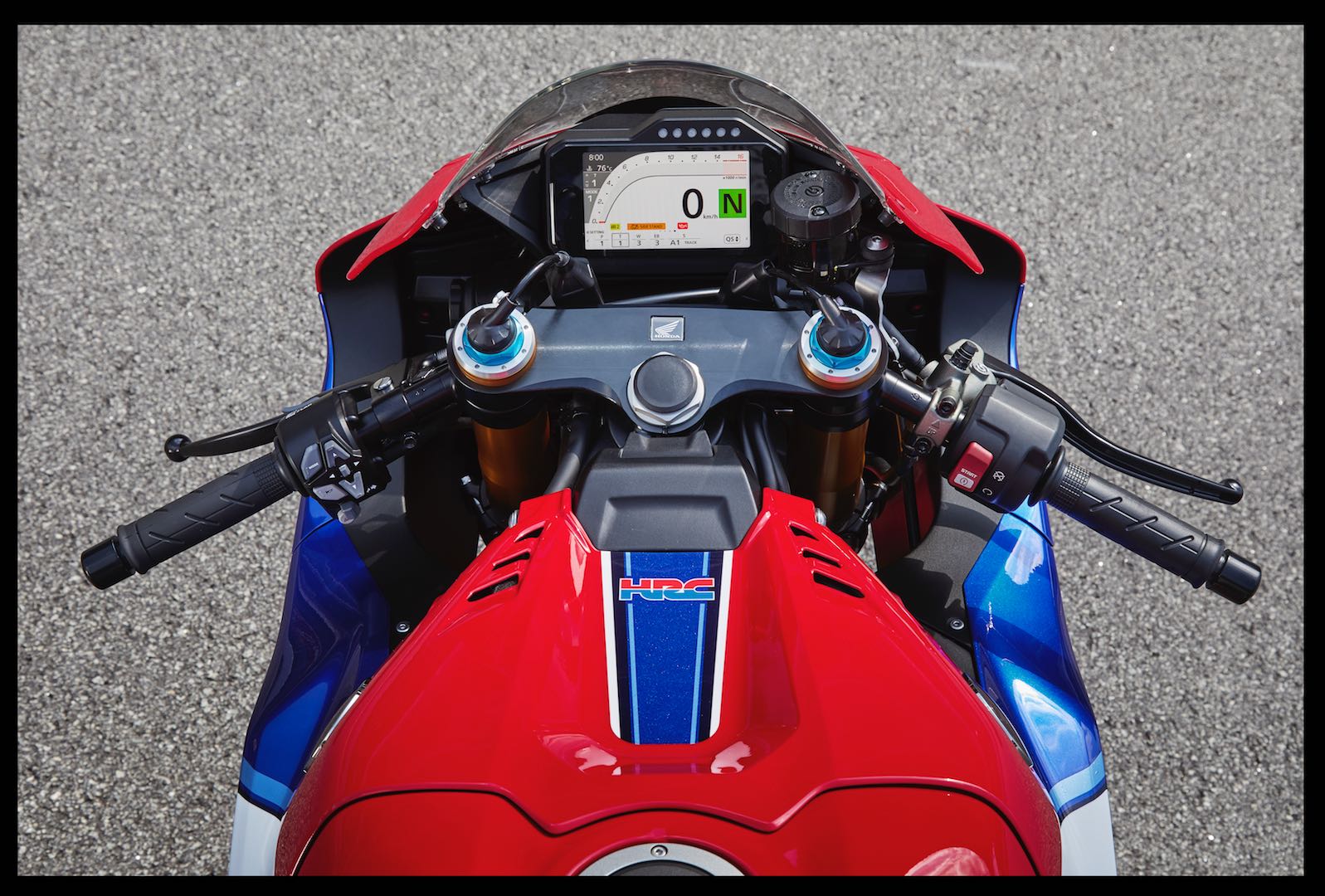 13. Öhlins electronic suspension is once again proudly featured on the Fireblade SP. Returning to the top-shelf SP parts list is a semi-active Öhlins NPX 43mm inverted fork and a linkage-assisted Öhlins shock. Also, Honda has now imbued the Fireblade SP with the Öhlins Smart EC 2.0 module to control the electronic suspension, which also appears on the Yamaha YZF-R1M and Ducati Panigale V4 S.14. The 2021 CBR1000RR-R Fireblade SP boasts upgraded Brembo components. Brembo Stylema calipers will now be clamping down on 330mm floating rotors in the front, with a Brembo master cylinder on the lip-on. Out back, the Brembo caliper is straight off the legendary Honda RC213V-S and works on a 220mm disc. ABS is standard.15. A six-axis IMU supports a full suite of adjustable electronic rider aids. Equipped with the latest and greatest from the Kumamoto factory, the CBR1000RR-R Fireblade SP has a fully fleshed out electronics package, including five power modes, three engine-braking levels, multi-level traction control (plus off), two-level cornering ABS, three-level wheelie control (plus off), start mode, as well as clutchless shifting via a up/down quickshifter system.16. The 2021 Honda CBR1000RR-R Fireblade SP will be released as a limited-edition model in US markets and will be available in June 2020. Better contact your dealers soon if you live in the states because the triple-R SP will not be a mass production model. The MSPR is a stiff $28,500, and expect the Fireblade SP to hit dealers in June next year. In the meantime, the standard RR will continue to be available. 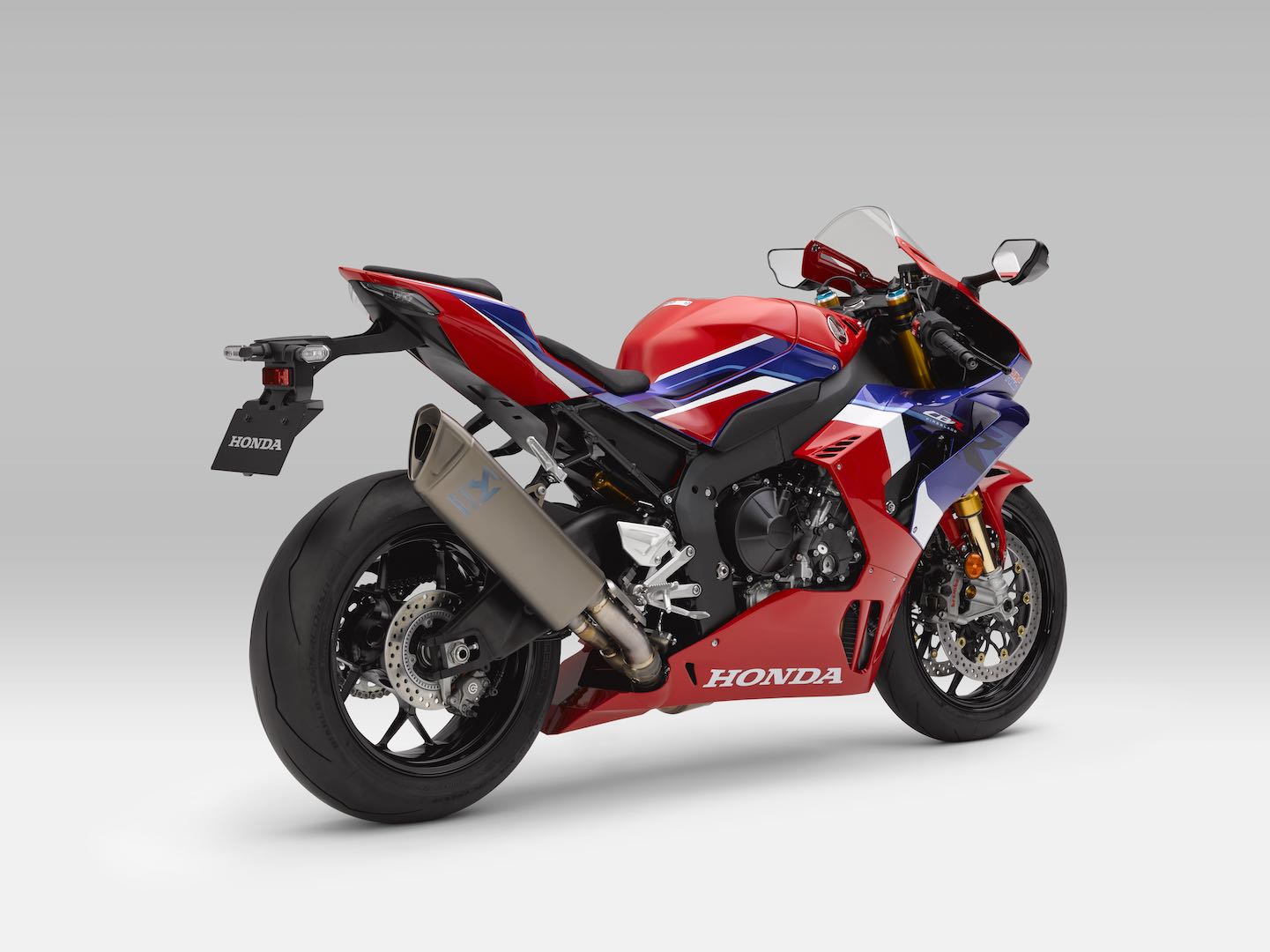