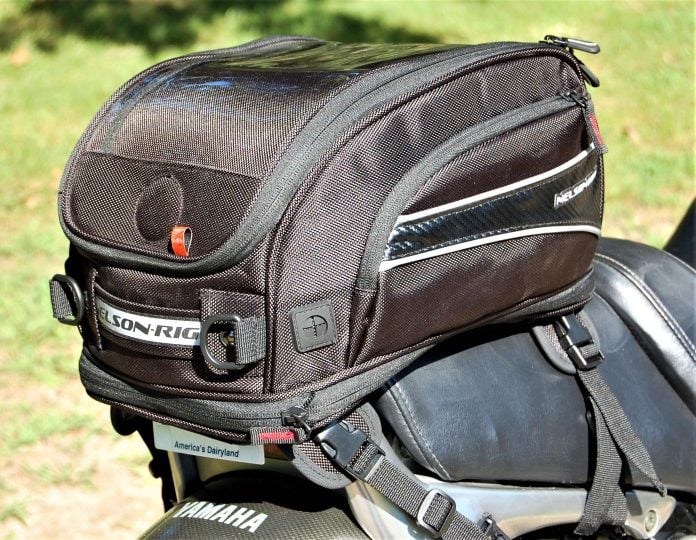 OK – first, a disclaimer. I didn’t necessarily use the Nelson-Rigg Tank Bag as directed by the manufacturer. I do that with a lot of different things. Instead of using it as a tank bag, I use it as a tail bag.In May, I picked up a 2002 Yamaha V-Max, which had no cargo capacity. I like to bring along odds and ends even on a day trip, so I had to find something. 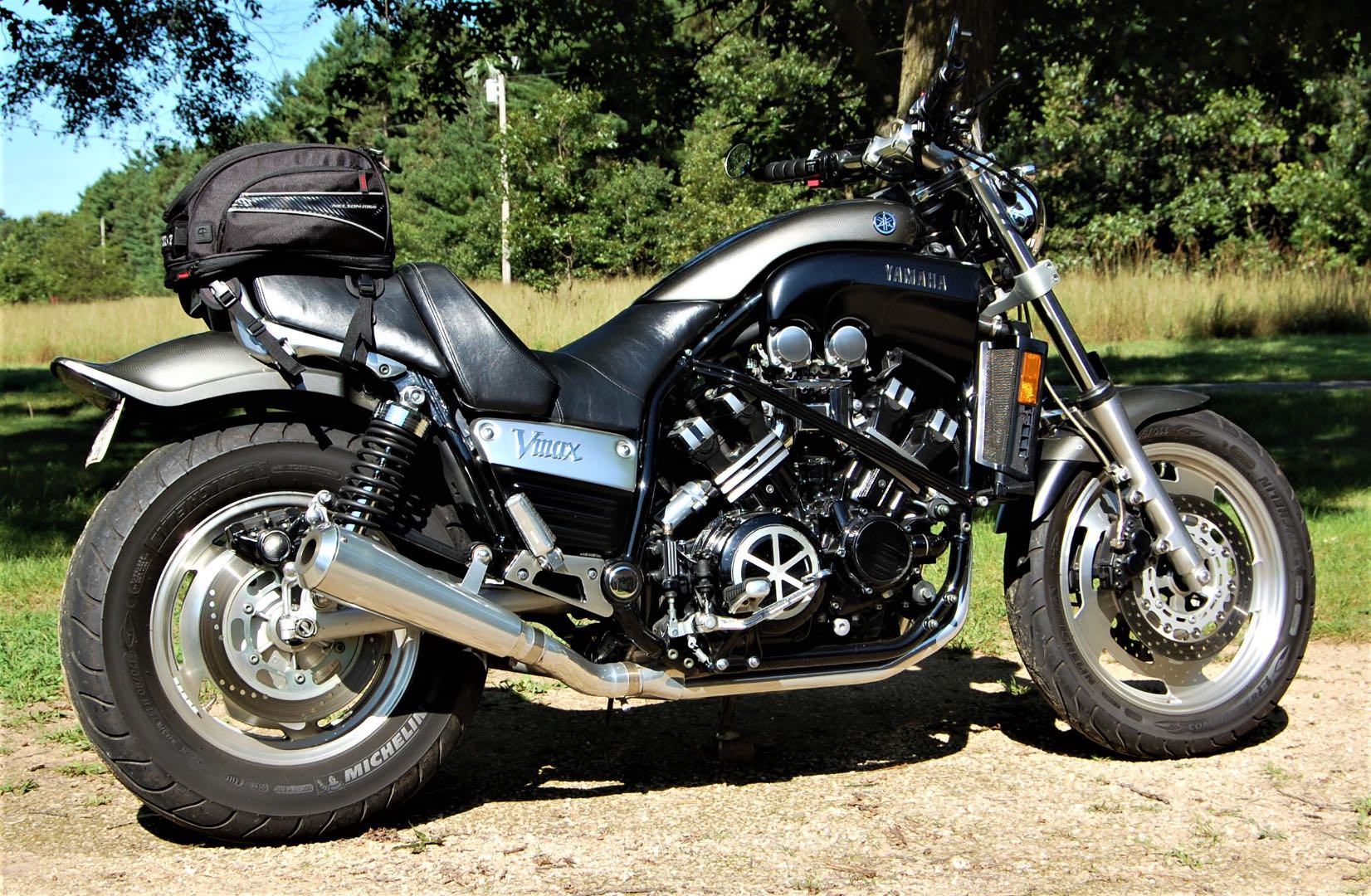 My first idea was to adapt a Can-Am Spyder tail bag for the job and, while it looked good, it was just a little too small to handle all the stuff I always want to bring along. It was an “I can take this, but not that” kind of trade-off situation. And you know the rule: if you don’t take it, that’s the thing you’ll need.A few days ago, I was in Vetesnik’s Power Sports near Richland Center when I happened to spot a Nelson-Rigg CL-2015 Journey Sport Tank Bag – already sitting in the tail bag position on one of the floor display bikes.It was deeper than the Can-Am bag and with the pull of a zipper, it is even expandable for 1.5 inches of additional depth. At 13 inches in length x 9 inches in width the standard depth of 7 inches provides 13.42 liters of capacity; when expanded, it is 18.22 liters.The Nelson-Rigg bag also had an interesting variation on the theme of attachment: the magnets used to grip the tank in its intended application are in pivoting pockets that also include nylon prong clip anchor points. Inside the bag were a pair of nylon straps with the male end of the clips already attached to each end, providing four of the clips.By cutting those to length, I was able to come out with separate anchor straps for four-corner attachment of the bag on the back of the Yamaha’s seat. Two of the straps attach at the clip location I made for the Can-Am bag, the other two simply drop down and wrap around the frame. Neat. It took me about 15 minutes to make the adaptations and make the switch. 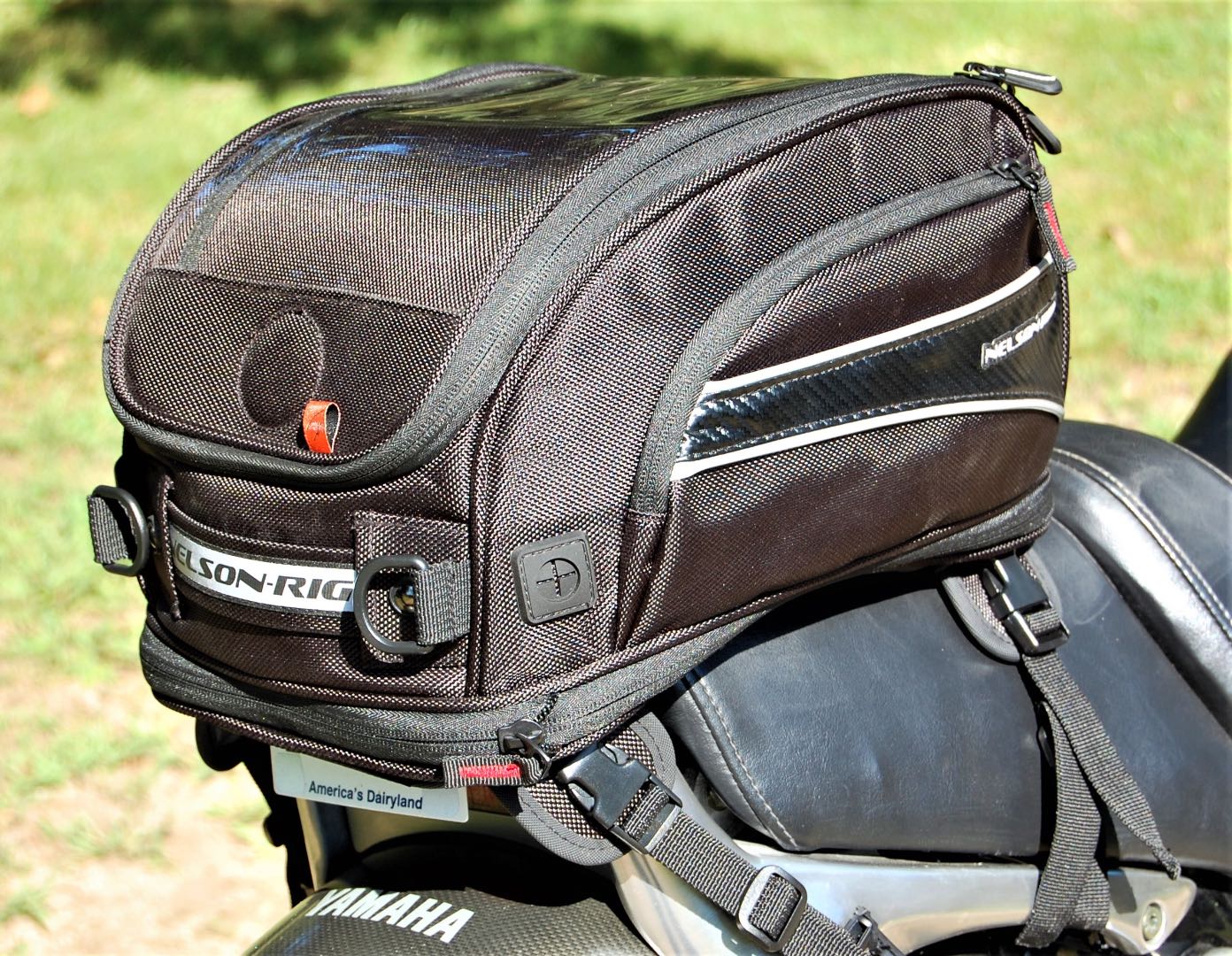 One minor fly in the ointment with the use of a tail bag on the V-Max is the way the mid-section of the seat must be able to pivot up and then forward to provide access to the gas cap under the seat. As a result, the front edge of the bag has to be held back a little from the inclined edge of the seat because the seam between the movable part of the seat and the fixed rear part of the seat is rearward from the inclined portion, but that’s a minor consideration.Nelson-Rigg makes a series of tail bags which are available in sizes close to what the tank bag offers as well as similar appearance and features. The tail bags don’t have the clear vinyl map window (otherwise known as poor-man’s GPS) in the top.One may argue that it doesn’t make sense to use the tank bag with that window feature as a tail bag and that’s not a bad point but for two things: first, the tank bag was there right when I needed it. I’m accustomed to making do with what’s at hand, so I grabbed it when it occurred to me it could solve my space problem. Second, I figure I may use it as a tank bag at some point on one of my other bikes, as well.The bag has that large main compartment but also has an outside zippered pocket on each side and a handy net pocket in the inside surface of the lid and one on the side of the main compartment.For increased visibility, the bag has retroreflective piping on each side and on the integral handle on the end of the bag. For increased versatility, the bag includes an adjustable shoulder/tether strap that can be used to convert it to a back pack.According to the product literature, the map window is “touch screen friendly” but since I’m not there yet with my techno devices (I still carry a flip-phone), that’s nice to know but not a deal-breaker for me one way or another. The bag includes a similarly equipped rain cover. The bag includes cable pass-through grommets for other wired devices.

Other optional add-ons include a hydration pack (CL-hydro-S) and GPS Mate for your GPS, smart phone and other devices (CL-GPS-MG).Perhaps the most compelling feature included is the “no-hassle” lifetime warranty. These days the terms “lifetime” and “warranty” usually don’t appear in the same sentence for any product.In use, the thing is golden. It stays where I want it, holds pretty much everything I want to haul along with room to spare, and I haven’t even set it up in the expanded form. Loaded for a trip that would include documents of insurance, registration, maintenance log, old-fashioned paper road map, owner’s manual, an elastic cargo net, a couple of small bungees, water bottle, tire repair, camera, tool kit and a few miscellaneous small items.The Nelson-Rigg CL-2015 Journey Sport Tank Bag retails for $109.95 and if you need some versatile space for your gear it’s a good investment—particularly with that lifetime warranty!