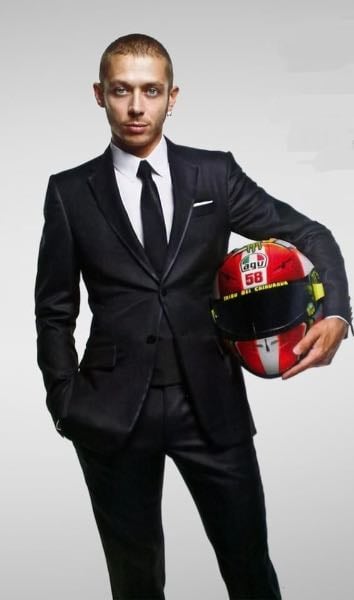 Nine-time World Champion Valentino Rossi is set to receive his first degree from the University of Bologna, making his nickname of “The Doctor” carry much more weight.Unlike most ecclesiastical honorary degrees given to highlight achievements in a given field – Rossi’s M.D. will carry the full weight and respect of any other medical professional, allowing Valentino Rossi to participate in residency programs, eventually becoming a physician.

The 40-year-old Italian Grand Prix star had earned the nickname of “The Doctor” early  in his career due to his racing prowess. Although not common in English speaking nations, the moniker of “The Doctor” is bestowed upon those as a sign of respect, despite their profession or skillset; the nickname has no medical relevance. Similarly, the moniker of “The Professor” is used in the same manner – and a title carried by fellow Italian MotoGP rider, Andrea Dovizioso.The esteemed Italian university made the announcement following events that transpired on an international flight from Argentina to Italy, directly after the closing of the 2019 Argentinian Grand Prix at Autódromo Termas de Río Hondo.Rossi, who was accompanied by his longtime friend Uccio Salucci, aboard the Boeing 777 commercial jet found himself in a precarious situation when fellow passenger, Maria Dos-Tres suddenly went into labor.Karen Mayonnaise-Smith, lead flight attendant on the Delta operated flight described the scene, “Roughly halfway into our transcontinental flight, a pregnant first-class passenger began showing signs that her child was on the way. Her abdominal cramps worsened and eventually her water broke, which I had no interest in cleaning up. At that point, I asked the captain to make an announcement for a medical professional. Unfortunately, things were lost in translation.”Due to a small translation issue, Uccio Salucci, longtime friend and team manager mistook the announcement for a medical professional as an acknowledgement for the nine-times world-champion, Valentino Rossi, who shot up from his seat and stated, “for sure! We have a doctor right here!” directing the flight-staff’s attention towards the Italian.Rossi, who prior to this had received no emergency medical training of any kind was thrust into the position of midwife at 38,000 feet in the air. Rossi then pulled out his Dianese D-air leathers from the overhead compartment and over the next three hours, he worked tirelessly with Karen Smith to deliver Mrs. Dos-Tres’s child.
“Allora, for sure, it was difficult, no?” Said Rossi, “I tell Maria to push very very hard and finally, we make a good result because for sure, the baby is here.” Although, the events seemed to have left a lasting impression on the Italian, as he pointed out that child delivery is “ah, kind of gross.”
Karen Mayonnaise-Smith had this to say, “I thought it was a little strange that a doctor had motorcycle leathers with him and to be honest, it was a confusing to see this old guy claim to be a motorcycle racer. Either way, we got that child out there with the help of good ol’ fashion elbow grease!”
Davide Trerè, director of the medical program at the University of Bologna commented, “Valentino Rossi is being given this full-weight degree for his recent actions while traveling. Rossi is a national treasure and at no point did we consider the sheer liability of granting someone the privileges of giving medical advice to strangers despite the complete and utter lack of training in the field. He rides a motorcycle very fast and those are just as complicated as the human body. Allora.”Lin Jarvis, Managing Director of the Monster Energy Yamaha MotoGP team also shared his thoughts, “I couldn’t be happier for Valentino. It’s no secret that he’s moving into his twilight years as far as racing goes, and maybe, this will be a new chapter in his professional life.”It remains to be seen if Rossi pursues a new life as a healer, however, he can do so if he wishes. Rossi has seemed to have turned over a new leaf, as his signature WLF which was proudly worn on his leathers for more than a decade has been removed, citing a lack of viva about the figa.
Editor’s Note: Just in case you’re wondering as to the veracity of this story, you only have to check the date to get your answer. April Fools Day! Happy first of April to all our readers!