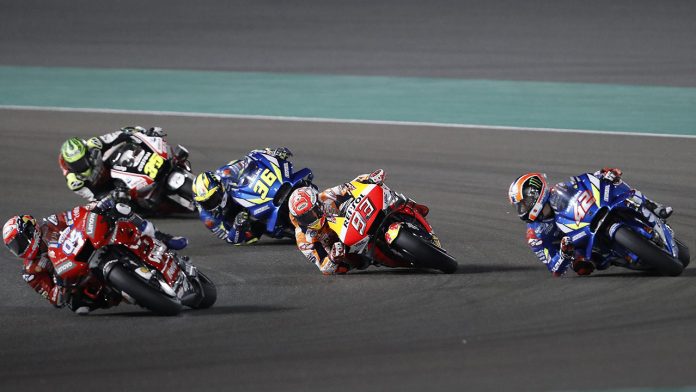 In a thrilling finish to a close race, Andrea Dovizioso beat reigning World Champion Marc Márquez to the checkers by 0.023 seconds to win the opening round of the 2019 MotoGP Championship.It was a relatively slow pace around Losail International Circuit keeping the top riders at the VisitQatar Grand Prix close. Dovizioso and Márquez battled it out at the final corner, as they did last year, with the same result—a close Dovi win. Cal Crutchlow finished in P3, just 0.320 seconds behind Dovizioso, making it the tightest podium in MotoGP history.1. Pulling the holeshot from the front row, Andrea Dovizioso managed the race with tire conservation in mind. Dovizioso (Mission Winnow Ducati) led the opening seven laps, keeping laps times in the 1:56s, which allowed the top 15 riders to be within one-second of Dovi well into the night. On lap 8, Alex Rins took the lead for three laps before relinquishing it back to Dovizioso, who never dropped back farther than P2. Márquez took the lead on the penultimate lap, but Dovi struck back on the final lap as the two rode shoulder to shoulder. Dovi led going into the final corner, with Márquez shooting through on the inside, standing Dovi up. However, Márquez struggled to turn and Dovi retook the lead, holding off Márquez’ slipstream attempt at the finish line.2. Although Andrea Dovizioso beat him again at Qatar, Marc Márquez was satisfied with his runner-up position on a track that traditionally challenges Honda. Márquez (Repsol Honda Team) settled into a podium position early and never finished a lap outside of the top 3. He generally allowed Dovi to manage the slower pace, and Márquez was behind Rins as late as lap 17 (of 22). It took until the penultimate lap for Dovi and Márquez to make the break, with the two engaging in a tight-but-clean brawl under the lights. As in 2018, Márquez made a desperate move on Dovizioso, streaking past on the inside going into the final corner. Márquez couldn’t change the Honda’s direction in time, and Dovi dove back into the lead down the home stretch.3. It was a gutty podium comeback for Cal Crutchlow after recovering from severe leg and ankle injuries suffered during Phillip Island FP2 last year. Qualifying in P6, Crutchlow (LCR Honda Castrol) had the speed, though his endurance was in question. Crutchlow answered that question, riding among the top 6 for the entire race. Crutchlow did battle with Danilo Petrucci and Joan Mir most of the night, before pulling away from them on lap 17. From there, Crutchlow hounded Rins for the rest of the night. Rins headed Crutchlow on the penultimate lap, with Crutchlow passing Rins just past the finish line. Dovi and Márquez slowed each other down in the final corner, allowing Crutchlow to get to within 0.3 seconds of Márquez at the line. 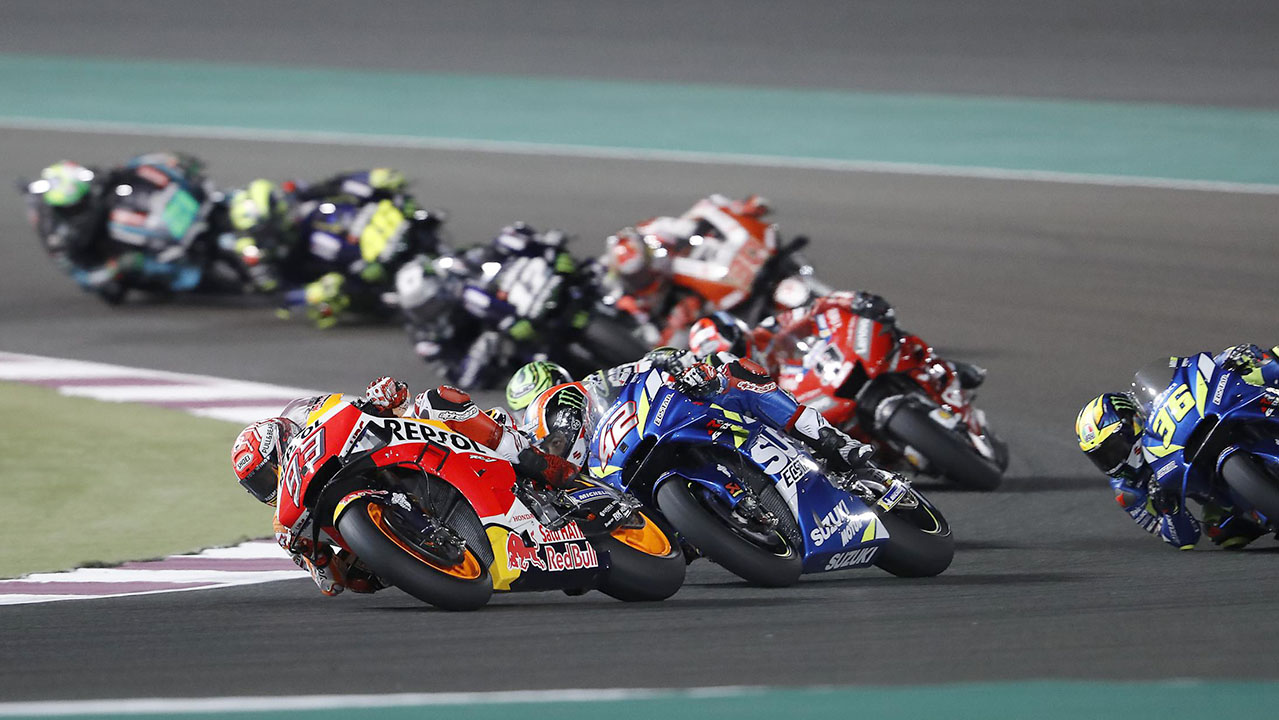 4. Alex Rins did the best he could with a motorcycle that still isn’t as fast on the straights as his competitors. Leading three laps just before the midway point, Rins (Team Suzuki Ecstar) took advantage of the slow pace set by Dovizioso. Still, Rins consistently suffered on the home straight, as his top speed of 347.2 km/h was 4.8 km/h slower than Márquez best top speed. Rins had set himself up for the podium with a pass of Crutchlow late in the penultimate lap. Crutchlow passed Rins on the home straight, and Rins could not retaliate. Rins missed the podium by 0.137 seconds, though holding off Valentino Rossi by 0.143 seconds.5. Bouncing back from a disastrous day of qualifying that left him on row 5 for the start, Valentino Rossi finished in P5, just over a quarter-second off the podium. Rossi (Monster Energy Yamaha MotoGP) marched his way toward the lead group confidently. Rossi was P12 by the end of the first lap, and in the top 10 with two laps in the books. Rossi hit P8 on lap 4, settling into the lead group for the rest of the race. Rossi made his move toward the top 5 on lap 16, when he went by teammate Viñales and Joan Mir on the following laps. Three laps later, with three remaining, Danilo Petrucci was Rossi’s next victim, with Rossi slotting in behind P4’s Rins. Although Rossi could make no more headway, given his qualifying in P14, a P5 finish within a breath of the podium was spectacular for the 40-year-old seven-time MotoGP Champion.6. From the pole, Maverick Viñales suffered early, as he often did last year, and could not make it up at the end. Viñales (Monster Energy Yamaha MotoGP) was shuffled back to P7 in a shockingly bad start. In the busy mob at the front early in the race, Viñales moved up to P5 on lap 2 and then back to P8 the following lap. A pass of Takaaki Nakagami on lap 4 settled Viñales into P7, where he finished. When Rossi passed Viñales on lap 16, it was looking even dimmer for Viñales. Viñales was able to retain P7 when he passed a fading Mir on lap 18. Viñales saved his fastest lap until lap 20, where he put in the third-fastest lap of the race. However, it was not enough to move Viñales past Petrucci, as Petrucci held off Viñales to the line by a scant 0.161 seconds.7. In his Mission Winnow Ducati debut, Petrucci ran a solid race. For his first time out on the factory Ducati, other than filling in last year when Lorenzo was injured, Petrucci turned a P7 qualifying into a P6 finish. Still, Petrucci had to have some disappointment, as he ran in P3 for two laps midway. However, running soft Michelins when everyone ahead of him was shod with mediums, Petrucci dropped off the pace. Rins went by on lap 13, followed by Crutchlow on lap 17, and Rossi on lap 20. 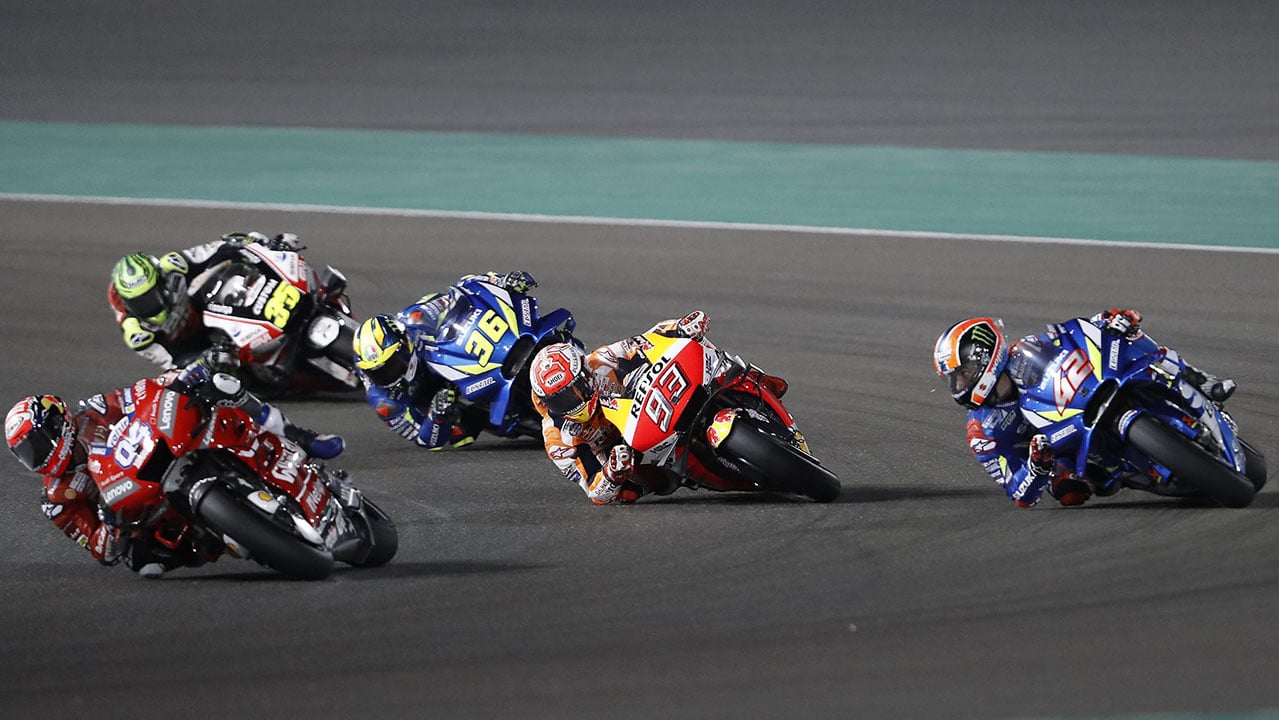 8. Joan Mir was the rookie of the night, finishing in P8 after running in P4 for eight of the nine opening laps. Running a soft rear Michelin, Mir started dropping off on lap 10, with his big drop coming on laps 17 and 18 when he was passed in succession by Rossi and Viñales.9. Jack Miller ran in P2 on the opening lap, but a loose seat dropped him out of contention. While running in podium contention, Miller (Alma Pramac Racing Ducati) had a seat issue and tossed it off the motorcycle on the second lap, quickly dropping him to P11 and eventually out of the race.10. Battered and bruised, Jorge Lorenzo was never a factor in Qatar. Lorenzo’s maiden ride on the Repsol Honda Team factory motorcycle netted him just three championship points after failing to graduate to Q2 on Saturday. Lorenzo did come good a bit at the end, passing Fabio Quartararo, Miguel Oliveira, and Johann Zarco on the last five laps on his way to a P13 finish, two better than his grid position.11. Rookie sensation Fabio Quartararo squandered his P5 qualifying by stalling the motor on the grid as the warmup lap commenced. Starting from the pits, Quartararo (Petronas Yamaha SRT) blitzed at the start on his own. His 1:55.039 lap 3 performance was the fastest lap by any rider of the night. It was not enough to get Quartararo any points, as he finished up in P16, less than a second behind Zarco. After peeling off 1:55s for the first half of the race, Quartararo didn’t have much left in his soft rear Michelin, and his times faded into the 1:56s for the rest of the race. Laps 18 and 22 were Quartararo’s slowest of the night, keeping him from challenging for a points-paying position. 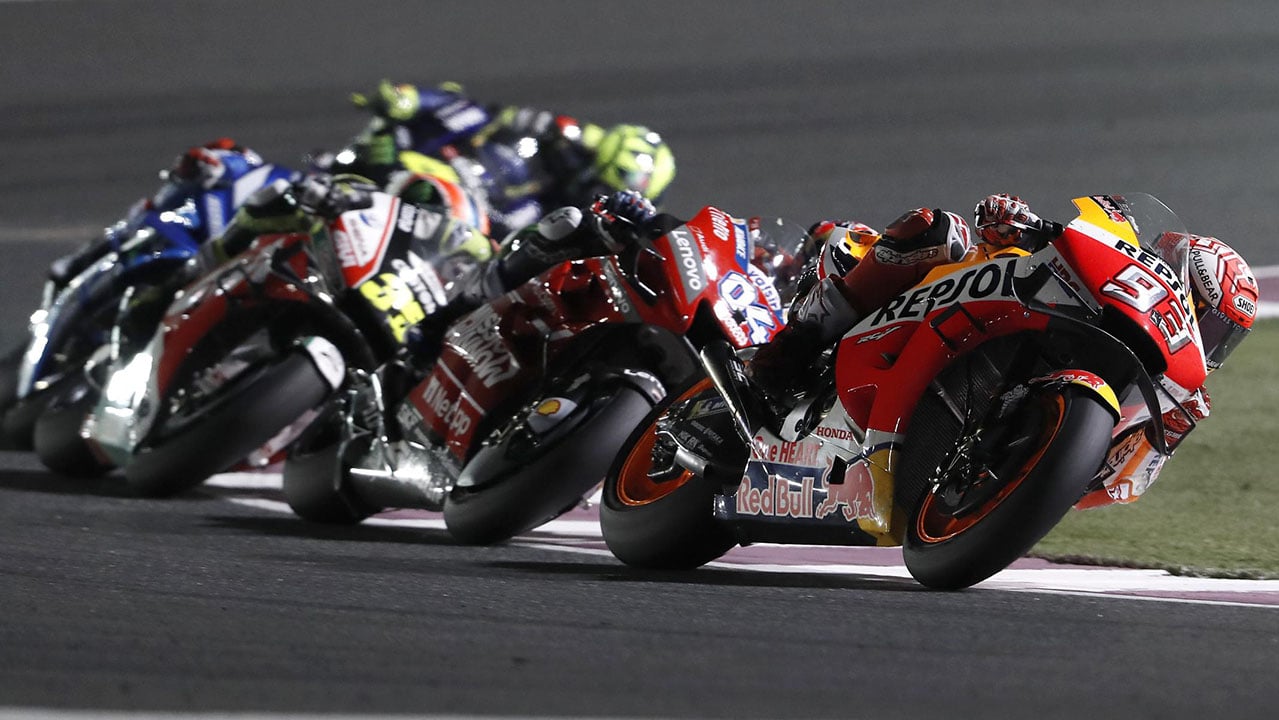 Márquez leads Dovi, Crutchlow and Rins
12. The race did not go to the swiftest. Winner Dovizioso’s fastest lap of 1:55.385 was only enough to get him to P6 on the Fastest Lap of Each Rider board. Even more shockingly, Dovizioso’s best top speed was just 346.3 km/h—there were 10 riders at Losail International Circuit with a higher top speed. Still, Dovi had enough ponies on the final sprint to the finish line to beat Márquez, who was the fastest on the night at 352.0 km/h. The fastest Ducati of the night was Miller at 350.4 km/h. Rossi had the fastest Yamaha at 347 km/h, the ninth fastest. KTM had the slowest top speed. Pol Espargaró’s 345.1 km/h was 0.9 km/h behind his brother Aleix, who had the fastest Aprilia.13. One fast lap doesn’t win the race. None of the top three in the Fastest Lap of Each Rider classification—Quartararo, Rins, and Viñales—finished on the podium.14. MotoGP racing returns in three weeks at the Gran Premio Motul de la República Argentina. It was an odd weekend at Termas de Río Hondo last year with mixed conditions, a delayed start with the oddest grid lineup in history that gave Miller a four-row head start on the field, Crutchlow taking the win, and Márquez penalized out of the points for rough riding. It might be hard to top that sort of drama.