When Ducati released the third-generation Multistrada 1200 in 2010, the upright adventure-touring motorcycle was highlighted as a four-in-one mount—Sport, Touring, Urban, and Enduro.

The bike became an immediate favorite for the street, though the enduro portion suffered greatly due the street-biased 17-inch cast wheels. The touring function also suffered due to a 5.3-gallon fuel capacity with a range under 200 miles. 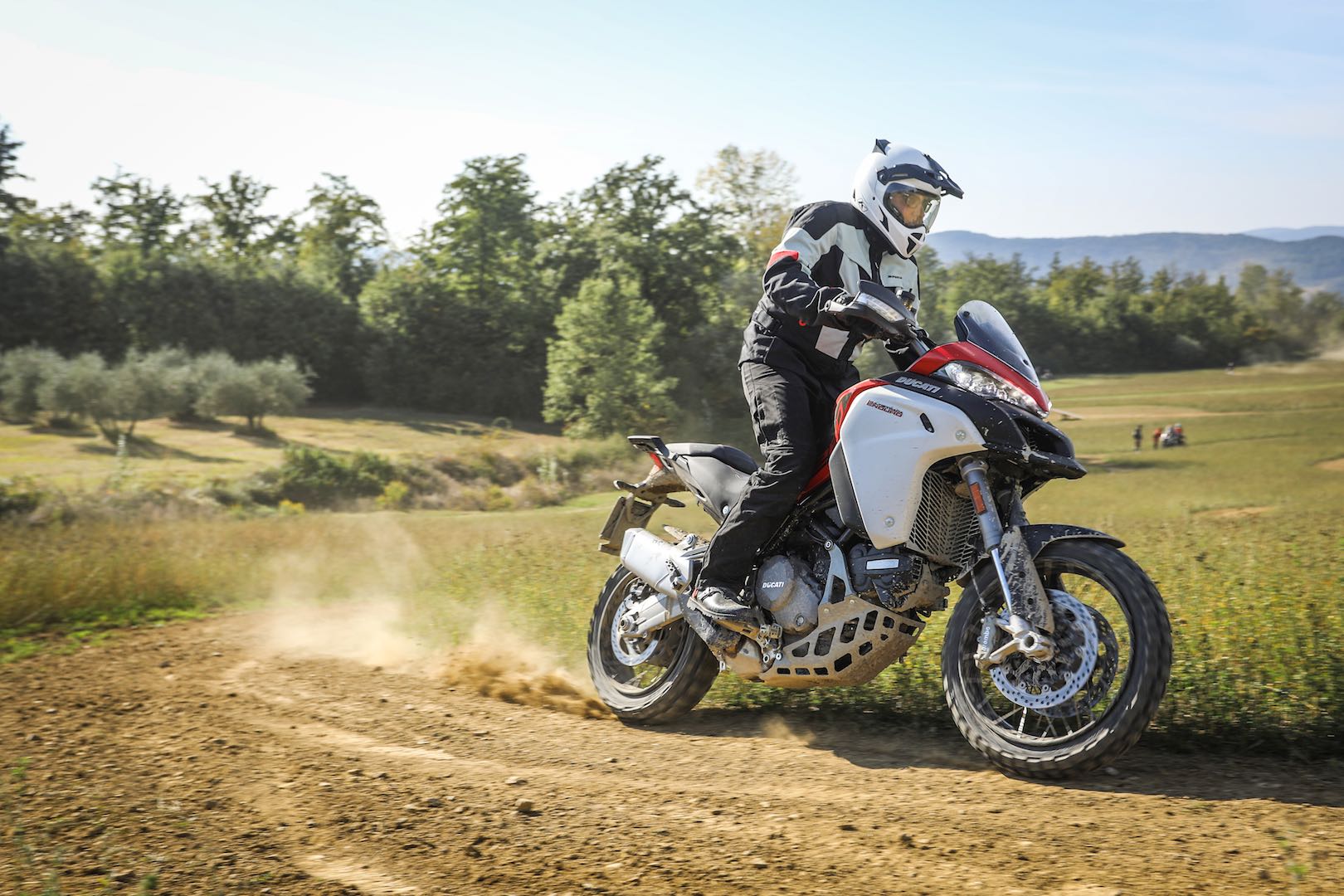 Ducati provided a solution to these off-road woes with the release of the 2016 Ducati Multistrada 1200 Enduro, which took the Multistrada 1200 platform and tweaked it for a more serious adventure tourer who would actually venture off-road. The Enduro model was upgraded with the addition of a 19-inch front wheel and a 7.9-gallon gas tank, along with ergonomic revisions.

This year, we get the new 2019 Ducati Multistrada 1260 Enduro. We headed to Ducati’s homeland to ride the adventure motorcycle around Tuscany in both off- and on-road situations.

1. The huge update for the 2019 MST Enduro was the addition of the all-new 1260 Testastretta DVT (Ducati Variable Timing) engine, which was introduced on the base Multistrada platform last year. The 1260 engine is vastly improved over the 1200, mostly due to its linear torque curve and lack of surging in the mid-rpm range where linear power is needed most for comfort. Expect some inner leg roasting, though, something typical of Ducati twins that make serious power.

2. The 1260 DVT has fully sufficient power with 158 horsepower at 9750 rpm, and 94 ft/lbs at 7750 rpm, but it’s not the peak numbers that matter. On the road the torque basically stays above 88 ft/lbs from 3900 to 9200 rpm, providing lack of shifting and surging while in a higher gear. With serious torque everywhere, the engine is an incredibly flexible performer. Also, the six-speed transmission’s gear ratios were also shortened for better off-road ability. 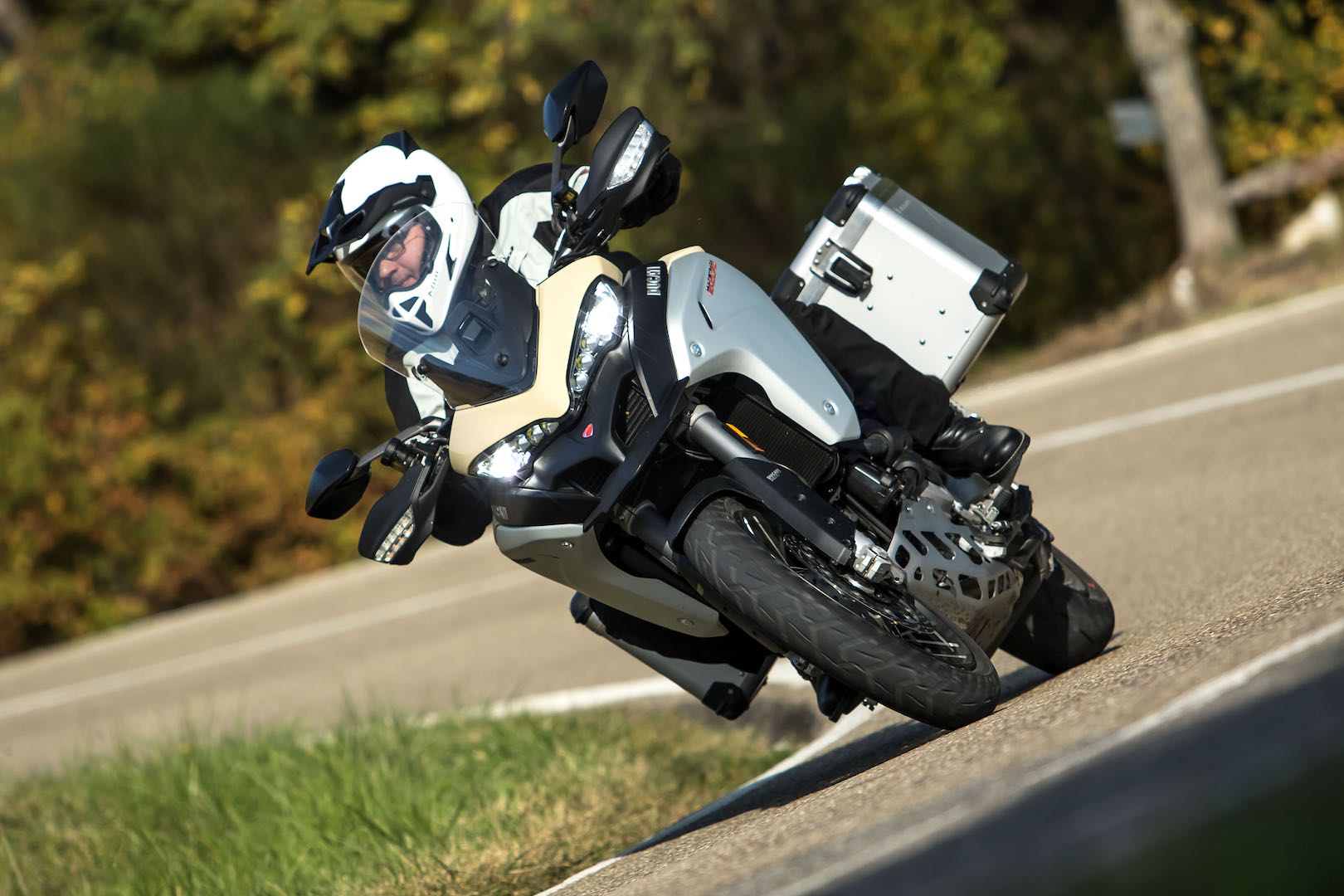 3. With 85 percent of the torque available under 3500 rpm, not much clutch work is needed for slower off-road duty. For the double-track portions of the test, this type of low-end torque allowed me to keep the six-speed transmission in second gear and drop the engine speed to the point where the previous-gen Enduro would stall. A quick twist of the throttle while in second gear and the MST revved evenly up to above 7000 rpm, allowing for more concentration on the trail ahead.

4. The 1260 Testastretta engine was designed to retain the high performance that Ducati’s known for, but with more practicality and longer maintenance intervals. Speaking of the latter, the 1262cc L-twin now needs oil changes every 9000 miles compared to 7500 on the 1200, and more extensive services at 18,000 miles, compared to 15,000 miles.

5. The 2019 Ducati Multistrada 1260 Enduro gets a full-service quickshifter for clutchless downshifts and upshifts. The quickshifter worked flawlessly on the street, though I had some issues with downshifting below 5000 rpm from third-to-second in the dirt.

6. To appeal to a larger range of riders, the ergonomics were noticeably tweaked. Ducati lowered the seat to 33.9 inches—down nearly a half-inch from the 1200 Enduro—and lowered the handlebars 1.2 inches. For a tad more legroom, two-tenths of inch were shaved from the rubber on the footpegs. Though the rider’s triangle from grips-to-seat-to-pegs has gotten more compact, my nearly six-foot frame and 34-inch inseam did not suffer from any cramping on a day that included 75 miles of road and 40 miles of off-road riding—with plenty of standing. For taller or shorter riders, Ducati offers higher (34.6 inches) and lower (33.1 inches) seats. 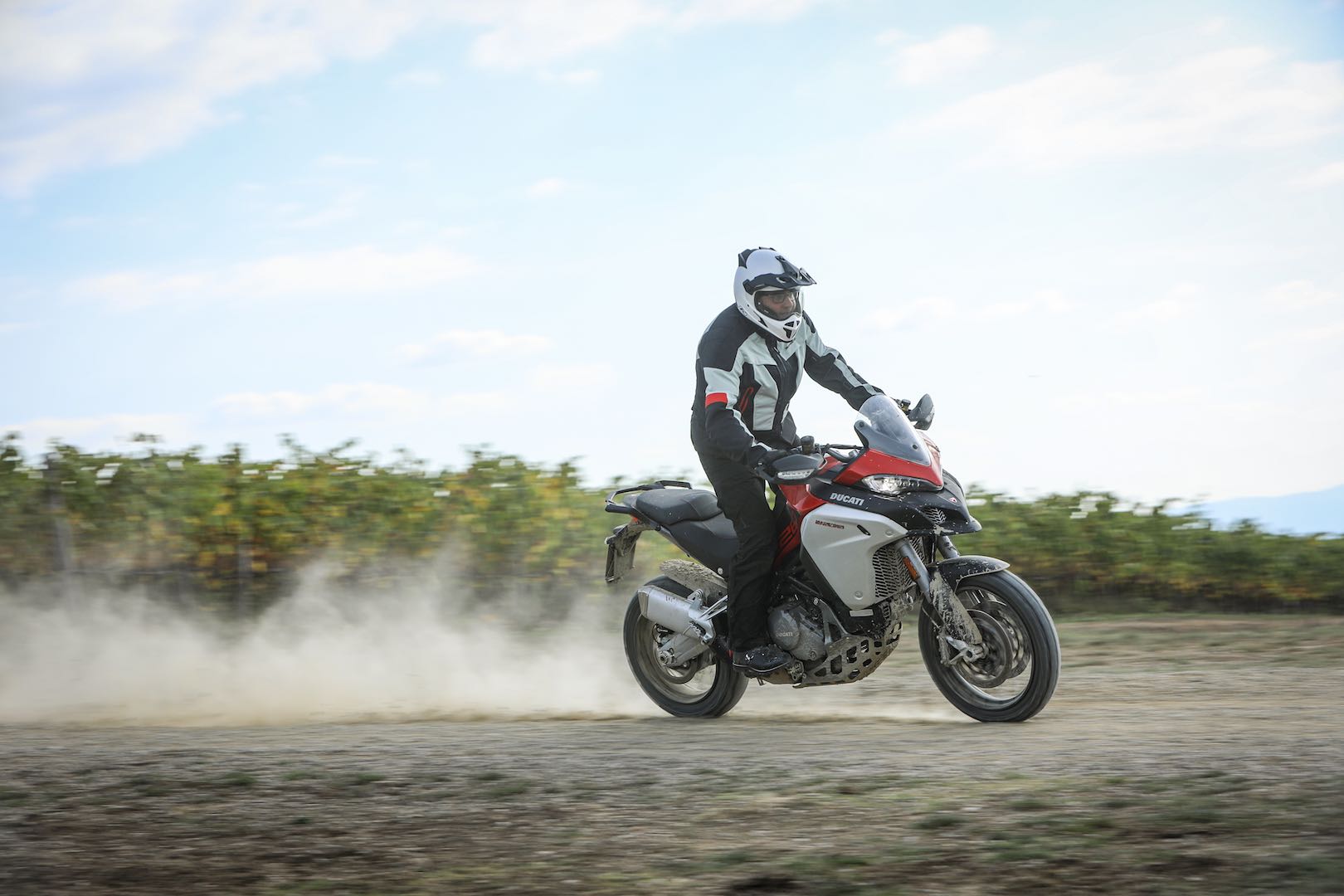 7. The front portion of the seat and gas tank is now slimmer, which provides a huge advantage for off-road riding. The slimmer front section is noticeable when sitting, but much more so while standing. Unlike the previous versions, you can now easily squeeze the gas tank with your legs while standing on the footpegs. This provides additional comfort while standing, which amps up confidence.

8. Wheel travel on the 2019 Ducati Multistrada 1260 Enduro are down 0.4 inches at both ends compared to the 1200 Enduro. I quickly assumed that the bike would bottom out quicker, but it doesn’t. This is due to the re-calibrated electronic semi-active Sachs suspension that compensates for rougher riding conditions with more dampening. Retaining over seven inches of travel, the suspension didn’t bottom out at speeds on the rough terrain or while jumping. A significant variable to resisting bottoming is how the electronic bike load is setup—I used rider + luggage setting for a bit stiffer suspension. 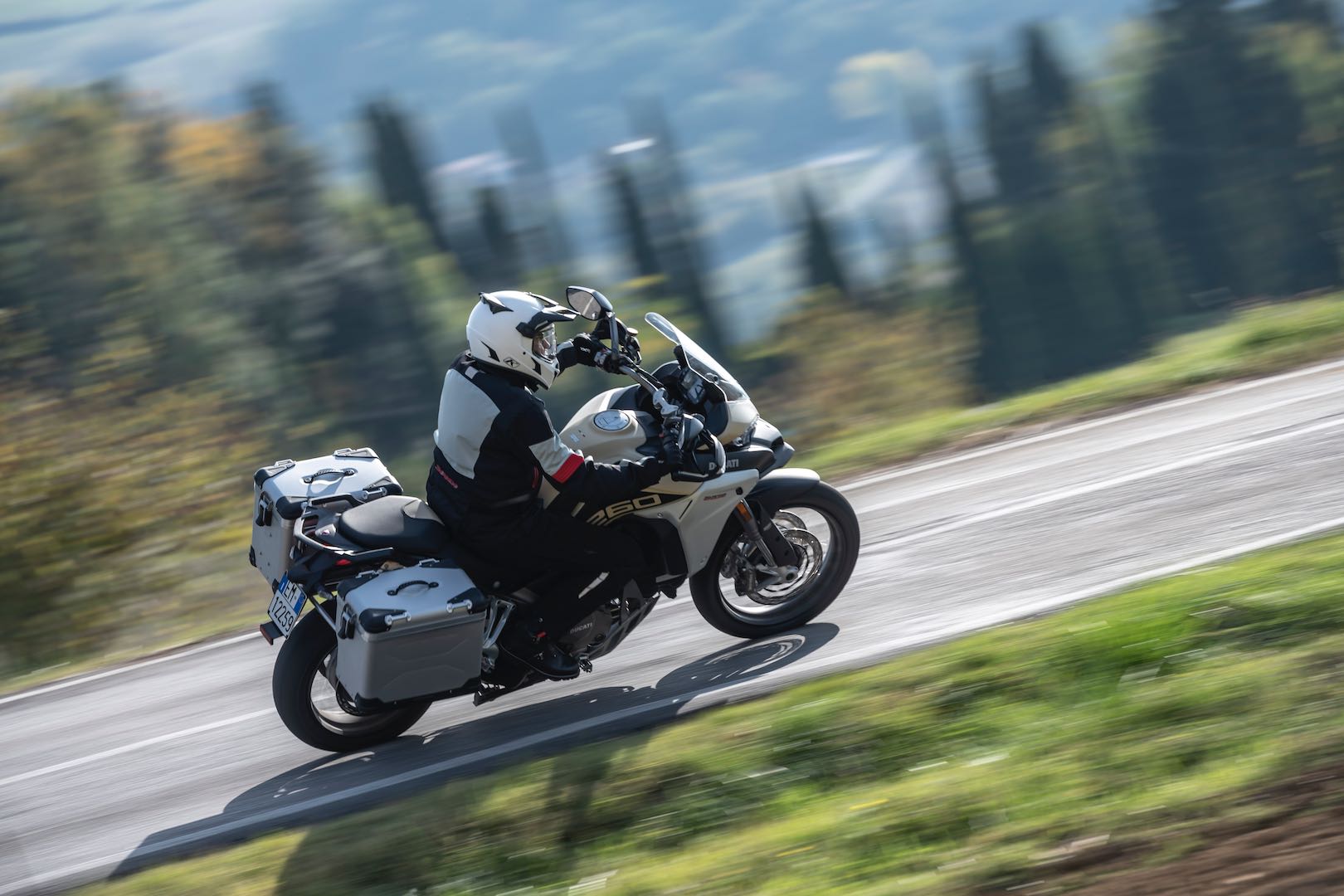 11. The Enduro riding mode now has three power levels, something that wasn’t offered on the previous Multistrada Enduro. The Medium power output provided the best feel on the throttle input; the high setting was too abrupt, and the slow setting not quick enough. It worked quite well on the 40 miles of fire roads and sharp rock- and mud-covered trails I tackled.

12. To manage all of these adjustments easily, the 2019 Ducati Multistrada 1260 Enduro has a new five-inch TFT high-resolution dashboard derived from the V4 Panigale. The design and layout is intuitive, and all settings are easily changed from a single dial on the left control. Switching modes while riding at speed is now simple, as is changing the exact parameters for each mode while the bike is stopped.

13. The 1260 Enduro continues the 19- and 17-inch wheel pairing, but they were redesigned to save 4.4 pounds. This, along with the revised suspension setup, allows the bike to turn easier—especially at various throttle loads while off road. 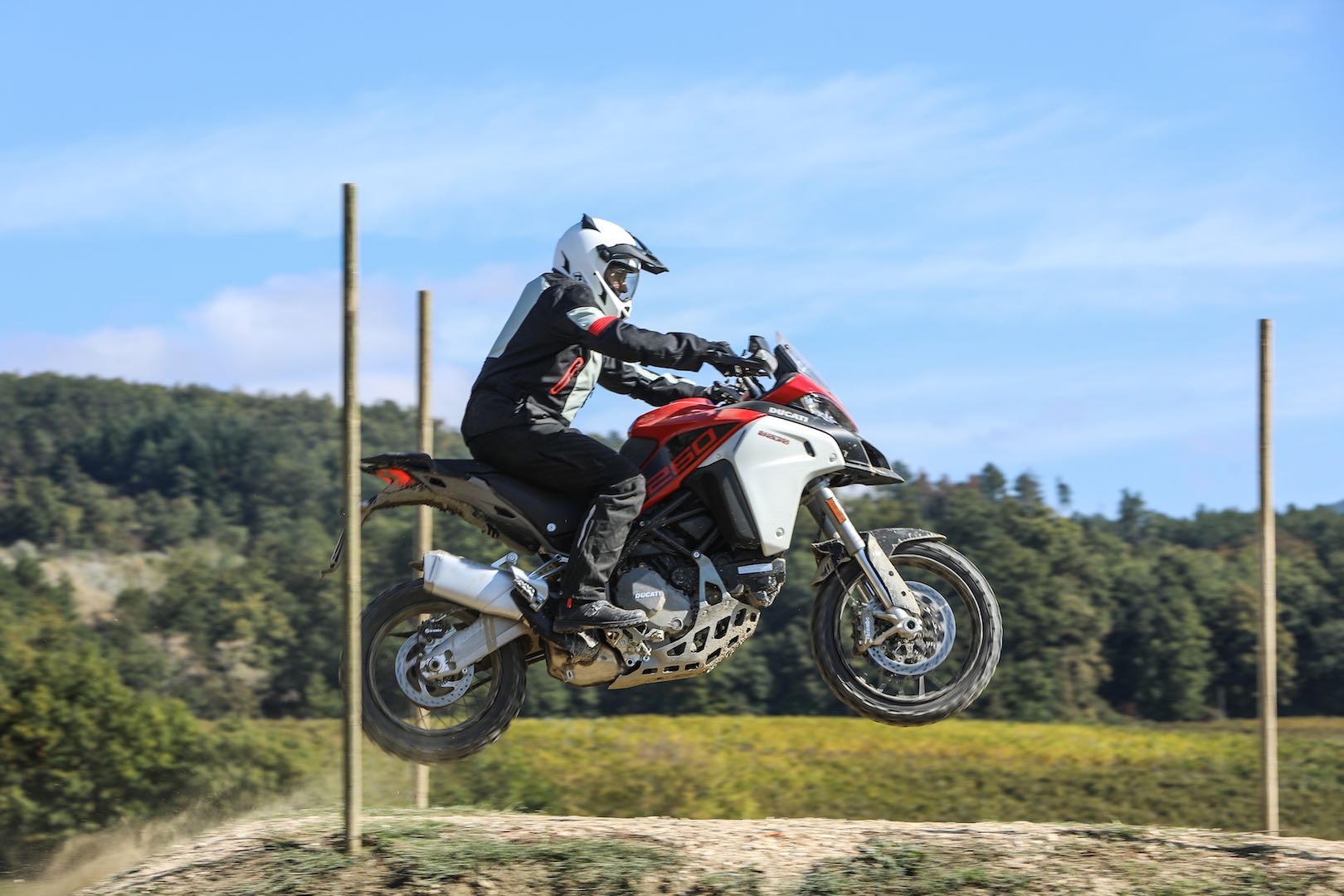 14. One of the most challenging parts of the off-road ride was the training grounds at the Ducati Ride Experience Enduro Academy. This is an adventure-touring course led by Beppe Gualini, who has 65 African rally-raids and 10 Dakars to his credit. Though I remained glued to our guide Andrea Rossi’s tail (a DRE instructor who helped develop the original Enduro 1200) during the trail-riding portion, the DRE course wore me out quickly. This is the type of big-bike off-road training I crave, and Ducati will be opening a DRE this spring “out west.” All details should be announced soon, and we’ll keep you posted!

15. The 2019 Multistrada 1260 Enduro’s wheels in street form are wrapped in Pirelli Scorpion Trail II tires and Scorpion Rally for more serious off-road riding . In the photos, the Sand colored 1260 is the street version, with the Rally tires on the Red Multistrada. Both sets of tires performed optimally for each riding intention, though the Rally tires got slick while riding through some muddy spots – something a lower PSI could have helped.

17. Welcoming additions are the Sachs steering damper, which helps stabilize the front end under aggressive riding, and the cornering lights. As for the latter, I didn’t ride at night, but noticed them working on portions of trails darkened by a tunnel of trees. Other features that upped the relaxation factor while riding were the cruise control, auto-off turn signals, and Vehicle Hold Control for easy uphill starts.

18. Due to US demand, the 2019 Ducati Multistrada 1260 Enduro will arrive in USA showrooms in March 2019 only in the Sand color with an MSRP of $21,795. The rest of the world will get the Ducati Red scheme, though Ducati USA says the red version will be available for customers to order at dealerships; it just won’t be stocked in show rooms. Dealerships should have the 1260 Enduro in February 2019.