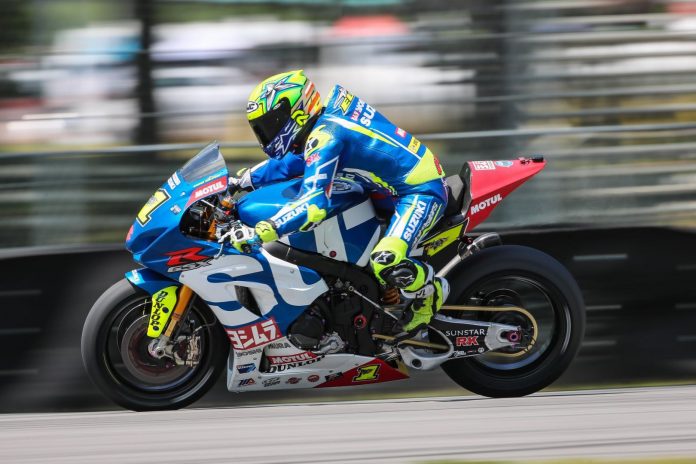 Moto2 Champion Toni Elias once again proved the dominance of the Suzuki GSX-R1000 in the MotoAmerica Superbike Championship.The 35-year-old Spaniard won both races at Virginia International Raceway (VIR), marking his second double of the season. The other arrived last month at Road Atlanta.After claiming the race-one win on Saturday, Elias earned the distinction of reaching 20 wins faster than any other rider in series history. Elias’ Sunday win also marked Suzuki’s 199th win in MotoAmerica/AMA Superbike history, putting them just one away from a historic 200th win.Suzuki is the all-time wins leader among manufacturers in the 42-year history of the MotoAmerica/ AMA Superbike Championship.Yoshimura Suzuki says Elias found two different paths to victory at VIR. In Saturday’s race, he trailed most of the way before making his move with two laps to go. In Sunday’s race, Elias controlled the pace from the front, officially leading all 23 laps.Both races were epic battles with Elias defeating rival Cameron Beaubier (Monster Energy Yamaha YZF-R1) by  0.114 of a second on Saturday, and 0.546 on Sunday. Claiming third in both races was Yamaha’s Mathew Scholtz.With five wins in six races, Elias has stretched his championship points lead to 35.“VIR has not always been the best track for me,” Toni Elias says. “In yesterday’s race I just tried to stay close to Cameron [Beaubier] and in the end I was able to find a way to pass. Today I was leading all the way.“It was a different strategy, but it worked, and we were able to win again and most importantly build on our points lead. This was again credit to my Yoshimura Suzuki crew. Everyone worked so hard to improve our performance at this track and it worked perfectly. It is Mom’s Day in Spain and I want to dedicate my victories this weekend to her.”The series now breaks for three weeks ahead of round four of 10 at Wisconsin’s Road America, where Elias or his teammate Roger Lee Hayden, who suffered two DNFs in VIR, will look to achieve a milestone 200 victories for Suzuki.