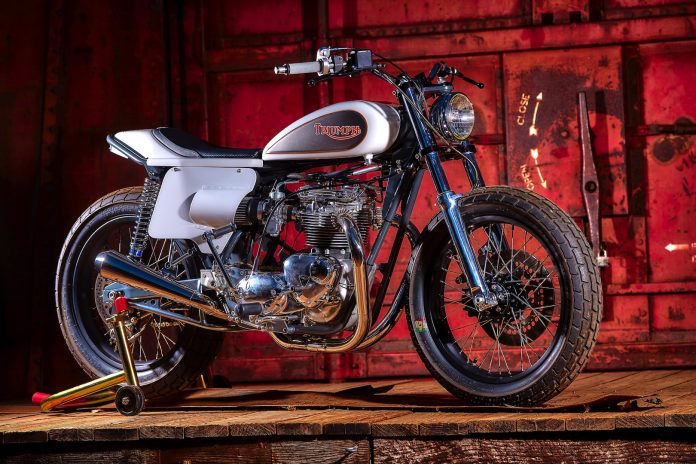 Richard Pollock of Mule Motorcycles has been swinging wrenches and creating fantastic flat track builds for decades, churning out bikes that are equally at home on terrain like the Oklahoma City Mile and on the streets of San Diego, where Pollack calls home. “I seem to get this type of build a little too often,” says Pollock, when speaking about the Mule Panther Cross custom motorcycle build.Every motorcycle enthusiast goes into repair situations with the best of intentions. Nothing too extravagant, but the nagging feeling of “while I’m here…” quickly takes over. I’ve certainly been guilty of that much. 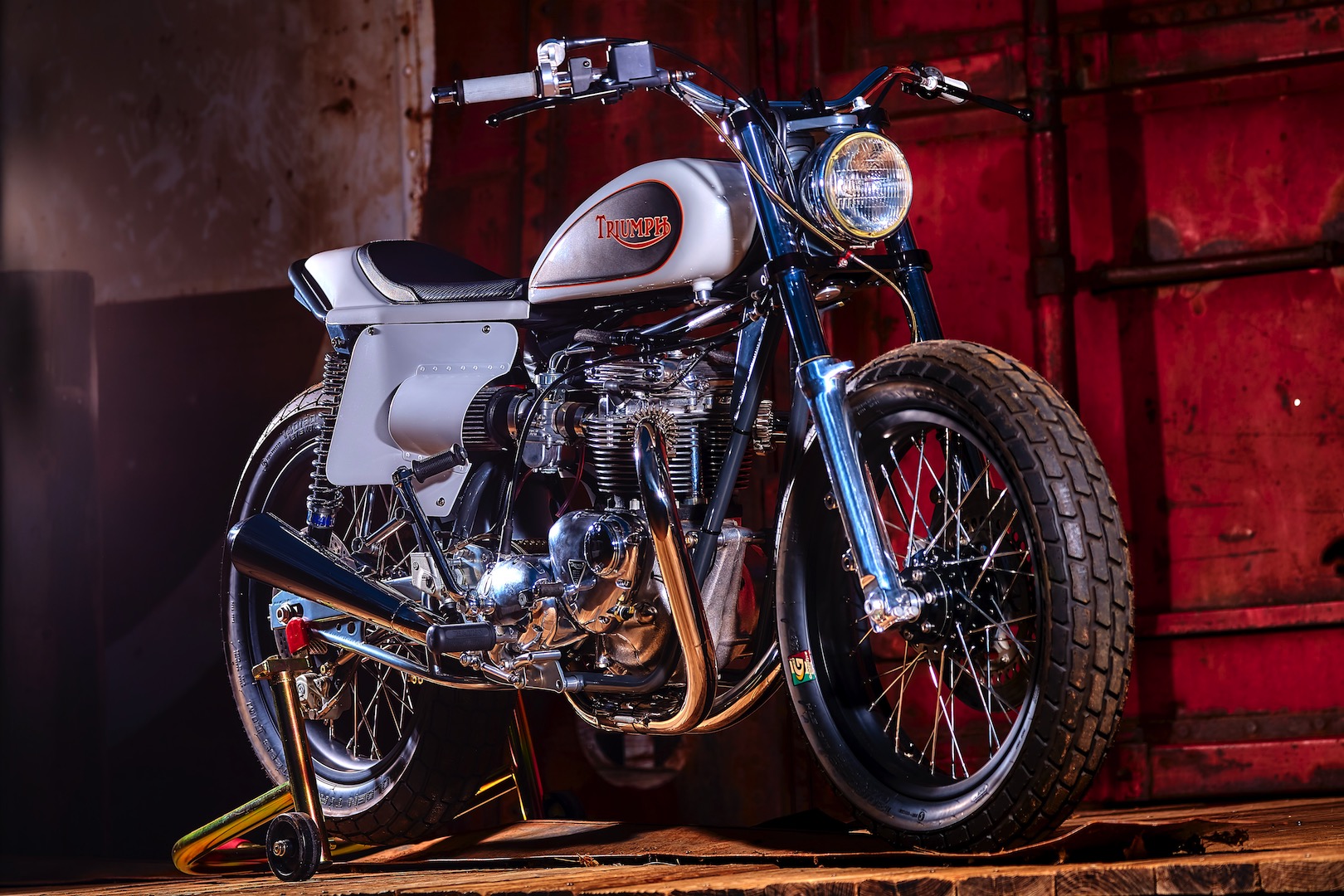 As Pollock recalls, the Mule Panther Cross appeared in his workshop as a “hammered ex-racebike—they are all hammered!” he says. “The intent was just some upgrades to the running gear. As happens so often, though, upon disassembly the bike needed extensive repairs.”The Mule Panther Cross began life as a battle-ready flat track machine and, while the name Panther has a certain panache to it, astute flat track aficionados will have correctly assumed that the frame of this bike is from none other than Led Szmek, owner and operator of Panther Frames, as if the trellis supports on the swingarm weren’t a giveaway. This particular frame was produced sometime in the 1970s and was the first order of business in the restoration project.First, Pollock went through the frame with a fine-toothed comb, replacing tubing where needed. “Of all the frames I’ve worked with or seen,” he revealed, “this one is of the highest quality and the general layout is simple and logical. Oh, yeah, and everything fits! Don’t laugh. That’s unusual in an aftermarket frame.” 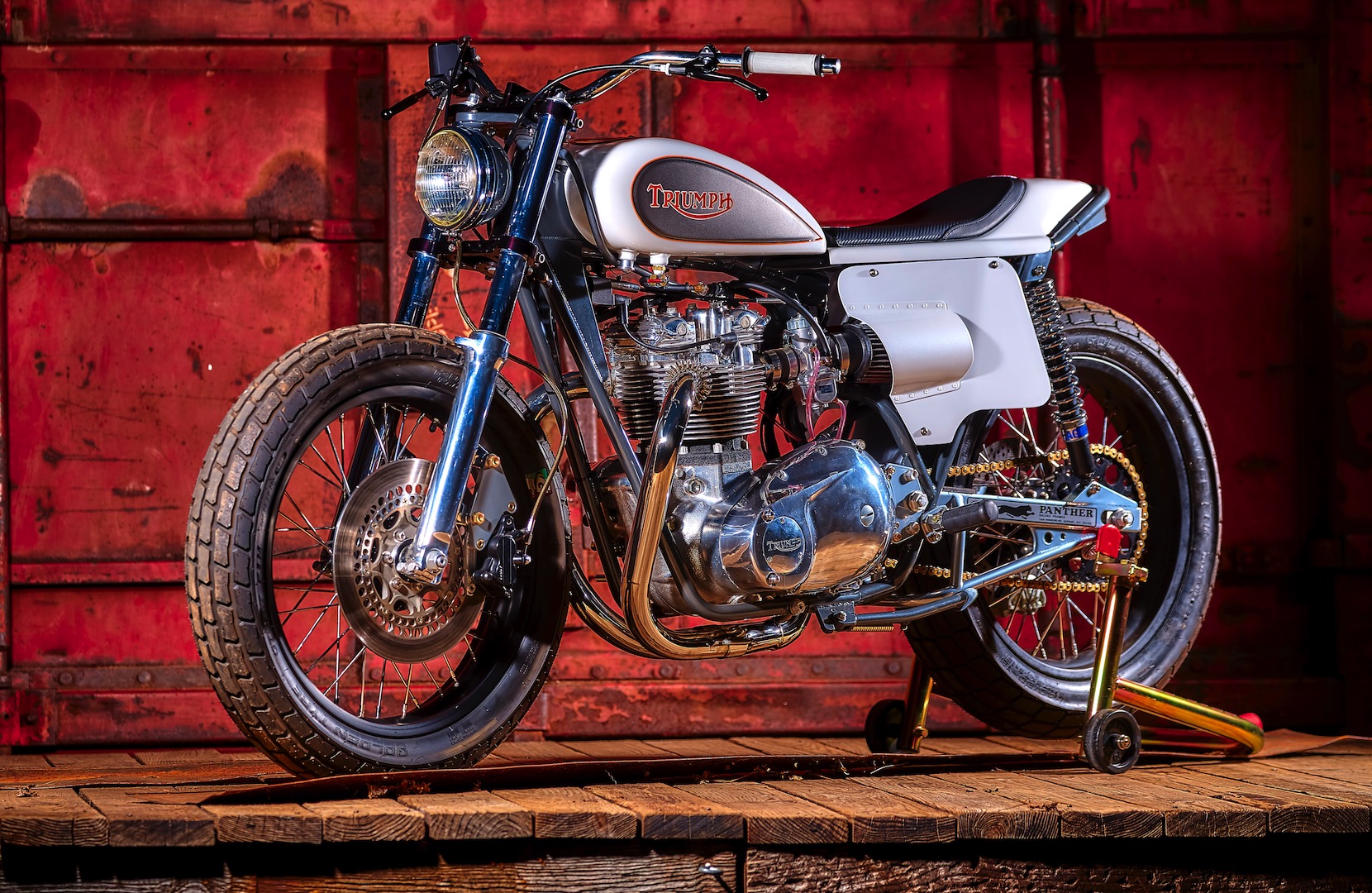 The Panther frame is utilitarian—built to race and everything else is left at the door. With damaged tubing replaced, the main spot of bother was the rear loop. For that, Pollock reached out to a friend that happened to have a new rear loop off a Wood-Rotax frame—the perfect source part for the Mule Panther Cross.With the skeleton of the motorcycle ready to accept more bits, it was time to push on and create a rolling chassis. Twin Hagon shocks take on rear suspension duties.A fresh set of 43mm triple clamps were sourced to prop up a conventional fork acquired from a Buell M2 Cyclone. In the world of flat track, the flex that is inherent to the traditional fork is a desired characteristic, unlike the inverted fork found in a high-performance road race machine.A Yamaha XS650 hub was salvaged for the Mule Panther Cross, but to mate it with the new fork, custom bearing-carriers had to be machined. A similar process was done for the Barnes hub in the rear—one of the few parts original to the bike at this point. That, too, had new knock-off adapters fitted to it.From there, the wheel components were shipped off to wheel gurus, Buchanan’s Spoke & Rim in Azusa, Calif. There, the hubs were laced up to wide Sun rims and Buchanan’s own stainless steel spokes. 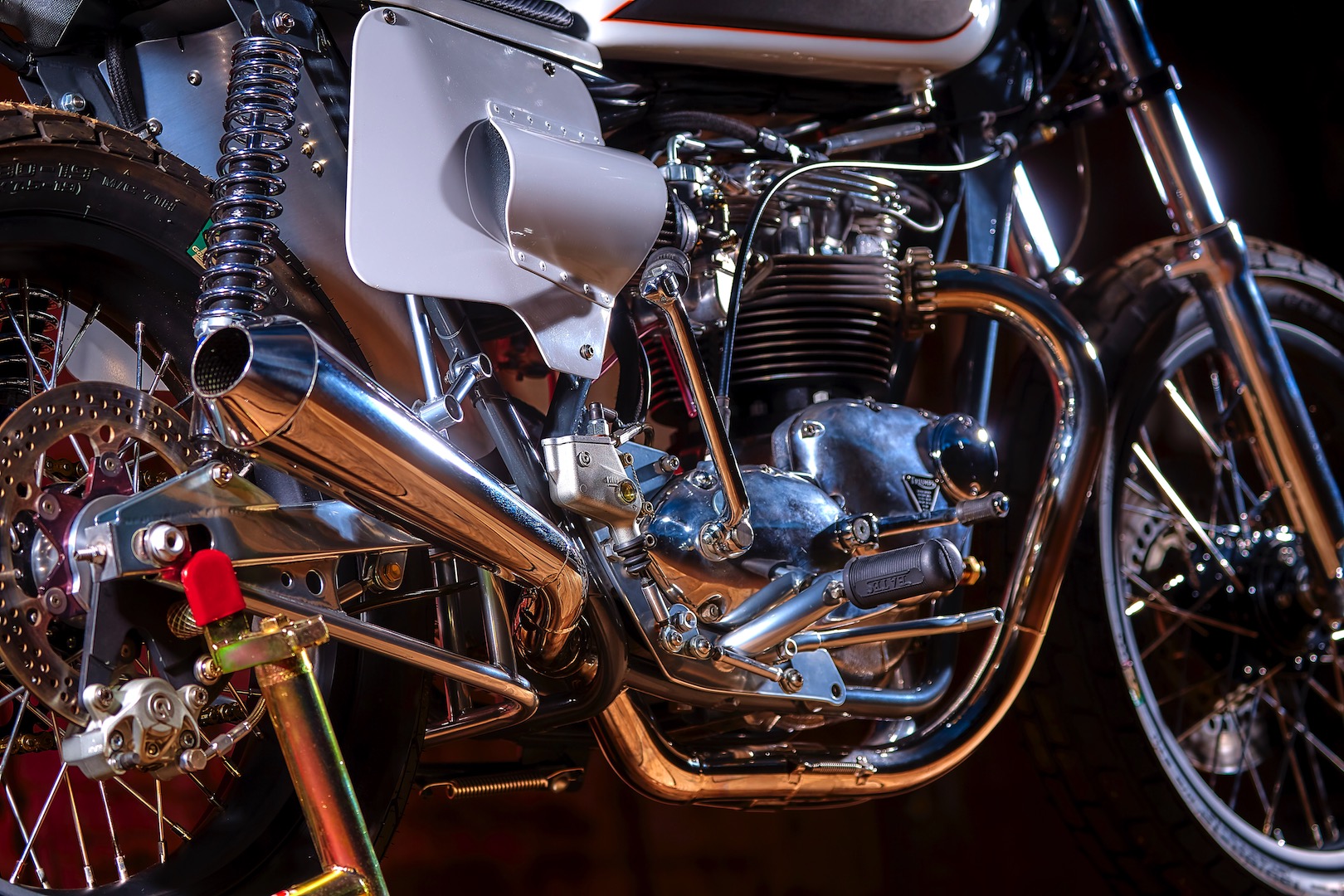 Powering the Mule Panther Cross, and giving it the gusto to send a fine roost onto the spectators, is a Triumph T140 750cc powerplant. Not to leave things undone, Pollock tapped Charlie Barnes from Branch & O’Keefe—a name that has been synonymous with twin-engine tuning for decades. The crack tuners based in Signal Hill, Calif. built up a fine British parallel twin engine, completed with Mikuni carburetors, K&N filters, and an electronic ignition.“Hardly seems like a proper British bike without oil leaks,” Pollock said, “but Charlie took care of that, too!” In its heyday, the T140’s powerplant produced around 49 horsepower from the factor. Thanks to a nice overhaul and a racy setup, we’re sure it’s packing a bit more punch.It’s no secret that ethanol gas has wreaked havoc for vintage cars and motorcycles. Fiberglass fuel tanks from the days of yore have tank linings that have been known to fail. Not wanting to fiddle with the complexities, Pollock opted for a tried and true solution—a Harley-Davidson XR1200 style fuel tank.The teardrop tank has been elegantly painted, with the Triumph logo emblazoned upon each side. While this bike may be a menagerie of components, it remains a Triumph at heart and the British marquee will be proudly displayed. 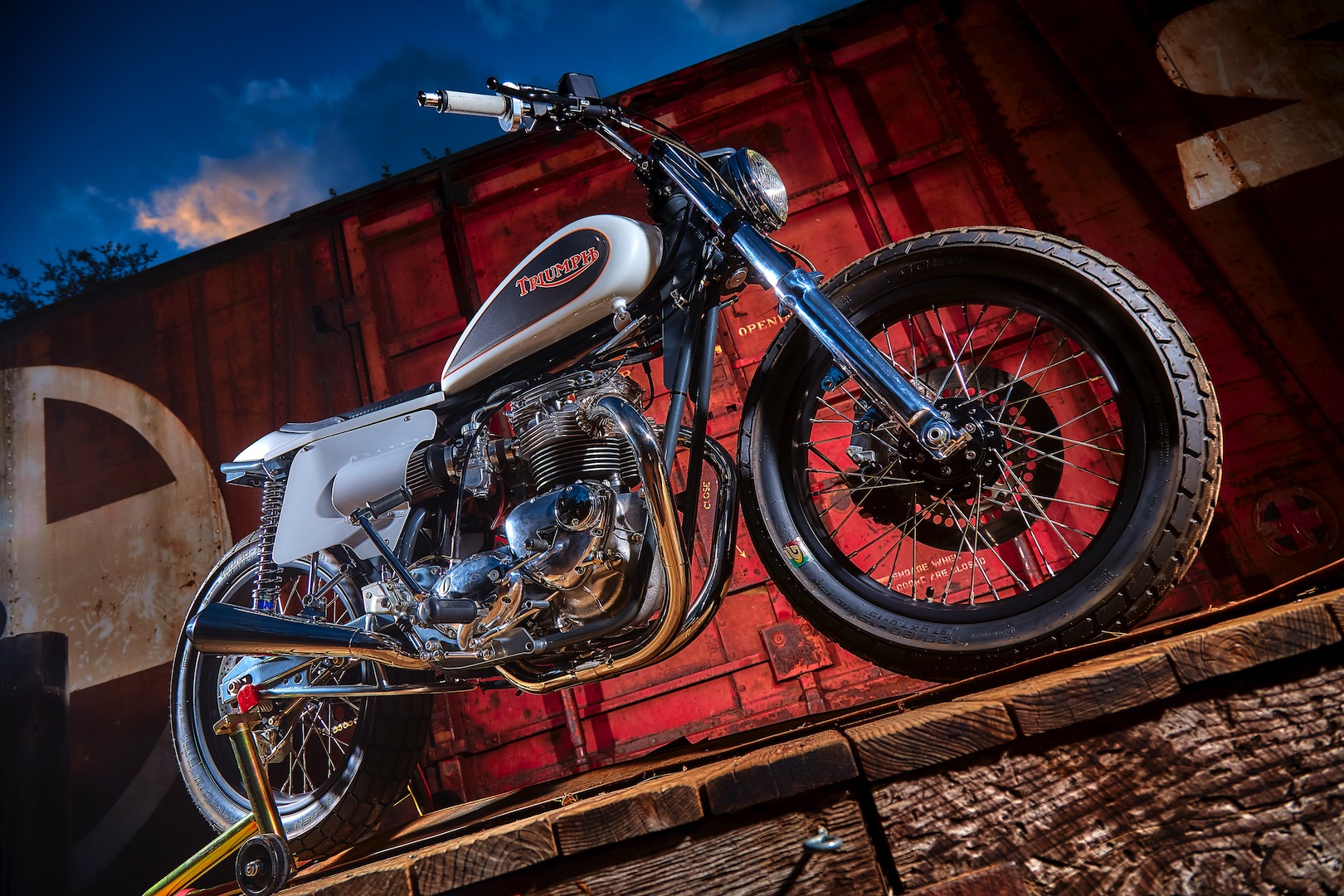 Our eyes are undoubtedly drawn back to the function-over-form flat track seat pan, sourced from Ron Wood Racing. The seat had to be modified to fit the Panther frame, but it wasn’t anything above the skill level of Pollock. Local saddle maker, Saddlemen whipped up a svelte seat for the Panther Cross, providing a decent amount of comfort while sliding into your favorite left hand turn.The stunning 2-1 exhaust that snakes its way through the Panther’s frame was done up by Mark McDade at Mark’s Performance Products in Hesperia, Calif. While we haven’t turned laps aboard the Mule Panther Cross, just by taking a gander at the stainless steel pipes, we know it sounds good.With any custom home or bike, there is always an odd request—one that soaks up the time of contractors and mechanics alike. In this case, it was to set up the foot controls on the right side only, just like a real miler.Both the shifter and brake are on the right side, which meant a lot of finagling had to occur to get the shifter on the right side of the bike. “I spent more time on the linkage, bellcrank, pedal, and master cylinder mount, which is also the right side motor mount plate, than on any other part of the bike. Ready for the Springfield Mile!” says Pollock. Given what it takes to route shifting to the opposite side of the machine, we believe him. 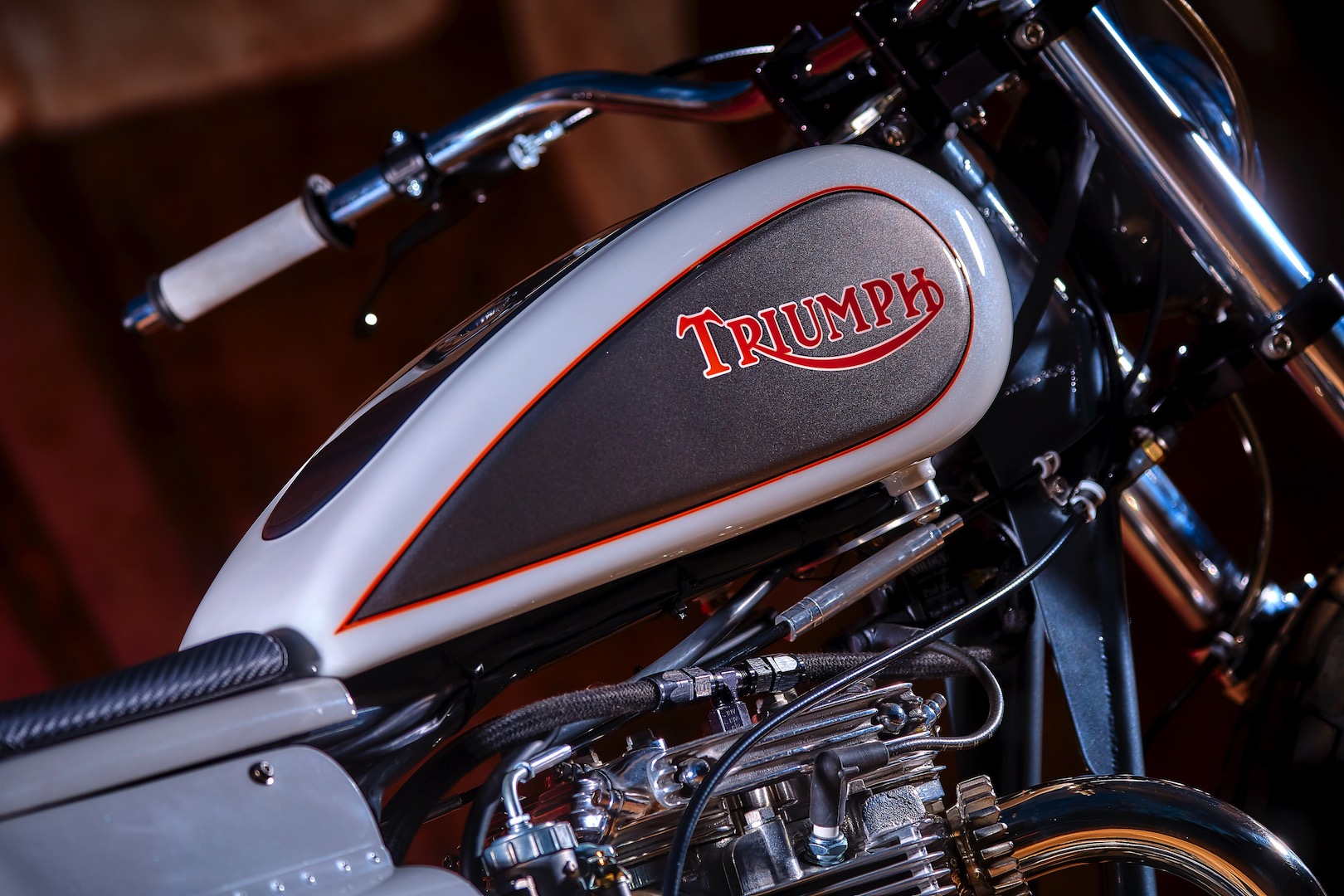 Goldentyre rubber helps round out the package and give it an authentic flat track vibe when sitting behind the Mule stainless bars. The white and gray paint scheme has a classic charm to it, aided by the subtle, red, Triumph logo. To that end, the color isn’t just a simple throwback— the customer happens to operate a sprint car race team and those are its colors.While Richard Pollock of Mule Motorcycles may quip that he gets too many builds like this, the results speak to the reason for that.Photography by Olivier de Vaulx