For 2017, Aprilia has revised its RSV4, offering the RR ABS (base) and RF ABS (upgrade). The boys from Noale, Italy, launched the bike at one of my favorite tracks—Circuit of the Americas in Austin.The 20-turn, 3.4-mile monster of a circuit was the perfect proving grounds for the 2017 Aprilia RSV4 RR and RF, which I rode back-to-back at the track fresh off the Grand Prix of the Americas. This is by far the best RSV4 ever built, with serious gobs of moto technology and comfort.Following are the essential 2017 Aprilia RSV4 Fast Facts following about three hours of riding both bikes.1. The differences between the RR ABS and the RF ABS are suspension, wheels, and graphics. The high-end RF gets Öhlins suspension, forged wheels, and gorgeous Superpole graphics. On the RR, you’ll find Sachs suspension and cast aluminum wheels, plus Grigio Bucine and Nero Ascari graphics. That’s it; all else, including the full electronic suite, is exactly the same on both models.2. The RF’s upgraded suspension and wheels are noticeable when riding the RR and RF models back-to-back. The RF was quicker to flight through the tight transitions from right-left-right at COTA’s esses (turns 3-6). Surprisingly, I preferred the base-model’s Sachs suspension, which was more than sufficient for my caliber of riding.3. The RSV4’s 65-degree, 999.6cc V4 powerplant returns with 201 horsepower and 84.8 ft/lbs of torque, but is heavily revised to reduce friction, which helps free revving. Romano Albesiano, Aprilia Racing Technical Manager, said the 2017 RSV4 engine has lighter pistons, revised connecting rods, and a tweaked ECU brings redline to 13,000 rpm—300 over the 2016’s V4.4. The V4’s power delivery is completely linear across the rev range. This allowed me to short shift in the tighter sections at COTA, keeping the bike one-gear higher and relying on powerful mid-range for smooth power delivery.5. The 2017 Aprilia RSV4 arrives with three rider modes that are all customizable: Sport, Race and Track. My preferred mode was Race over Track at COTA. The Track mode is too abrupt for my liking because I like to short shift the V4 due to the endless mid-range power.6. The RSV4’s eight-level traction control system is adjustable on the fly, including off. There are two toggle switches on the left control that are easily reached. I was able to quickly increase traction control, even with a knee down at around 75mph on COTA’s double-apex turns 16-18. I rode with level one for the majority of the day, which provides some slight sliding if needed. I began on Level 4 with new and cold Pirelli Diablo Supercorsa SP tires (200/55 out back!), and did not encounter one rear wheel slip, even while trying to back it into turn one. 7. Wheelie control at level 1 of 3 helped keep the RSV4 grounded on the longest straight in MotoGP. This provided speeds well over 175 mph all day.8. The 2017 Aprilia RSV4’s quick shifter now has clutchless downshifts. Both downshifts and upshifts engaged smoothly, even into first gear. At COTA, I thought I had an issue with it not working downshifting to second from 180 mph on the back straight. However, I had forgotten that you can’t keep your foot resting on the shifter lever; it needs to reset itself, which takes a fraction of a second.9. With Brembo M50 four-piston calipers squeezing 330mm discs up front, braking was never an issue. The adjustable lever has an easy pull, and allowed for easy one-finger trail braking.10. During my final session on the RSV4 RF, I tested the cornering ABS on the tight turn 11 that dumps you onto the back straight. It’s damn magical how it brought me to a stop with ease, which will help keep some bikes intact during emergency stopping situations on the street.11. The RSV4’s ergonomics are perfect for my nearly six-foot frame. For the first time at the track, I experienced zero cramping, and my damaged left knee could have gone another eight sessions. It has comfort similar to turn of the century sportbikes, and didn’t tire me out like I would on my Ducati 1198. The fairings and the windscreen also keep the body well protected from wind.12. The new opulent exhaust is Euro 4 compliant, but somehow the sound got better and louder. This thing screamed like a World Superbike on COTA’s front straight while the noise reflected off the grandstands and pit garages—something Euro 4 exhausts usually don’t do.13. The new TFT dash displays the data you need and it is easy to read, even while in direct sunlight. The new dash also features rider data such as a roll gauge (how much throttle or brake being used from 0-100 points).14. The 2017 Aprilia RSV4 has a multimedia platform (V4-MP) that connects with your smartphone via Bluetooth. In short, this allows the use of a headset and voice commands to change riding aids like the traction control.15. The RSV4 arrives with a Pit Limiter, Launch Control and cruise control, which are all value adds. The pit limiter was set at 37 mph (60 km/h), and it felt very racer-like having it on before getting onto the track. I have no use for launch control, though it’d be killer for racing. As for cruise control, it’s always a welcome addition, and still fairly unusual on sport bikes.16. At $16,999, the 2017 Aprilia RSV4 RR ABS is the great value compared to the $22,999 RF ABS. If I were purely racing, I’d go with the latter. However, the RR is more than enough bike for us mortals (read: not professional racers), though the Superpole graphics would be sorely missed.17. There is only one fault I have found with the new Aprilia RSV4 RR and RF superbikes—I don’t have one in my garage yet. Photos by Andrew Wheeler and Michael Brock 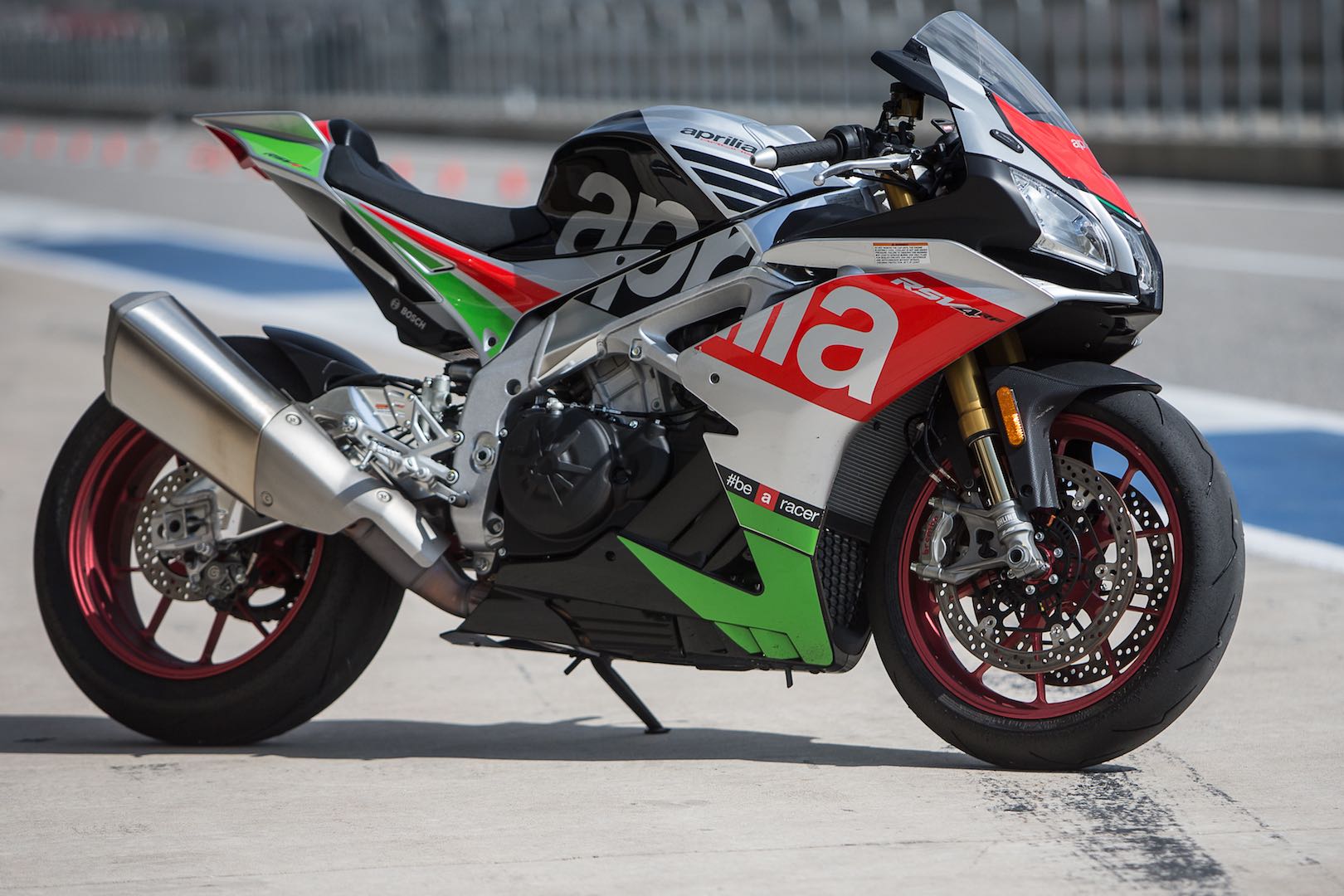