Round five of the 2016 MotoAmerica Championship at Wisconsin’s Road America began under wet conditions during practice and qualifying, but the track was dry for both Superbike races.Fresh off his debut in World Superbike, where he substituted for the injured Sylvain Guintoli, Cameron Beaubier completed the double at Road America. This put him back in the points lead, the Graves Yamaha YZF-R1 pilot now leading with 176 points – seven ahead of teammate and four-time AMA SuperBike Champion Josh Hayes.Beaubier now has 17-career Superbike wins, surpassing MotoAmerica President and three-time 500cc World Champion Wayne Rainey. The Californian is now ninth on the all-time list, tied with 2006 MotoGP Champion Nicky Hayden.2016 Road American MotoAmerica Superbike, Race One Recap:With wet practice and qualifying completed, Race One of Road America Superbike got underway with dry weather. All weekend the MotoAmerica riders had been sorting out set-up issues on the fast Road America Circuit, where Superbike riders are running wide open throttle 36 percent of their laps.Off the line, we saw some of the names that you’d expect getting to turn one first. Y.E.S Graves Yamaha riders Josh Hayes and Cameron Beaubier held onto first and second place with Yoshimura Suzuki’s Roger Hayden and Toni Elias, the 2010 Moto2 Champion, trailing close behind.While many will comment on the age of the Suzuki GSX-R1000 in comparison to the YZF-R1, the only areas you’d see it was the drive out of corners. Hayden rode a savage race, clinging to Hayes and Beaubier all the way through. His tenacity wasn’t just impressive, it was absolutely remarkable.Hayden was able to hold onto the Yamahas due to the scrapping between Beaubier and Hayes. These two are friendly off track, but there seems to be no love lost once the race goes green. With a mistake by Hayes down into the venerable “Canada” corner on lap seven, Hayden moved up into the second position and continued his hunt for first.The field began splitting up with Beaubier and Hayden running off on their own. Beaubier would earn the 16th win of his Superbike career, and Hayden would finish second. 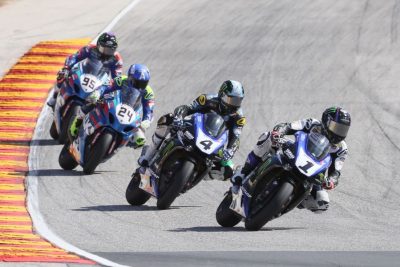 Hayes finished in a lonely third. Commenting on the result, Hayes said:  “I had fun racing with the boys. I made a pretty big mistake there, put myself off the back. I did a lot of work to put myself back into but I made so many mistakes it just because I was mad and trying to charge; finally calmed down and put good laps together, worked my way in there pretty close to those guys. I think I used up my resources when I got there, I was pretty baked.”Hayes had clawed his way back up to get a whiff of the race leaders, but he’d had spent his reserves getting there. Hayden’s GSX-R1000 shook violently under desperate moves, but he didn’t have the same power at the wrist. Following his second-place finish, Hayden says: “I struggled all week but I put it together in the race. Just losing a little bit to cam coming off the corners. Just tried to be close enough if he made a mistake or try to get a draft past him but I couldn’t get it done. Hats off to him, he rode a great race.”As for Beaubier, he rode flawlessly, though was quite defensive. As Hayes lost a close second earlier in the race, Hayden was quick to fill the void and as Cameron got in view of the pit boards, it still showed someone on his tail. “I wanted to redeem myself after throwing two bikes down the road on Friday and Saturday. My bike had some steam on those guys. I was able to get off the corner and carry a good amount of momentum down the straights. I had a lot of fun dicing it up with Josh, I feel like this is the first race I’ve been able to pass Josh on the brakes cleanly, without stuffing him a little bit.” Beaubier laid two bikes down over the weekend during practice and qualifying.Behind the race leaders was the Superstock battle, which for the 2016 season has been some of the closest racing we’ve seen yet. The top-five off the line were Italy’s Claudio Corti of Aprilia HSBK; Josh Herrin of Wheels in Motion/Motorsport.com/Meen; Bobby Fong of Latus Motors Racing; and fill-in rider, Mathew Scholtz of Team Rabid Transit. Kyle Wyman on the Millennium Technologies/KWR Yamaha YZF-R1 was in the mix as well.These Superstock 1000 riders circled Road America within a wheel of one another, each of them pushing their lap times down. It’s been a story we’ve been telling since Circuit of the Americas; Corti and Herrin swapping positions at the last possible moment. But a new face emerged as a threat in Road America – South African rider Mathew Scholtz, who gave both Corti and Herrin a run in the closing laps of the race. Though impressive, it wasn’t meant to be. Herrin eventually made a blistering pass on lap 12, seizing the lead. Corti struck back across the line, nosing ahead of Mathew Scholtz.Race One Results:DNF2016 Road America MotoAmerica Superbike, Race Two Recap: 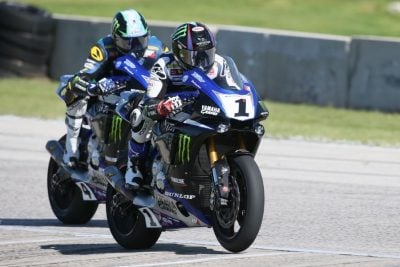 Suzuki’s Elias struck early and took the lead through the first set of turns, but Hayes battled back, returning to his favorite spot: the lead. Hayes dominated the front position into the first lap. But it would only last until lap five when teammate Beaubier took over.What happened up front? Hunger. You could see it in the body language of Beaubier, Hayes, Elias and Hayden. All of them rode as if each lap was the last, pushing it to the limit and giving up precious time due to mistakes.On lap seven, Beaubier ran wide on turn five, allowing the Yoshimura Suzuki riders to close in. It wasn’t long before Elias inched his way up in the field. Heavy on the brakes, he dove into turn five, claiming the lead but only for a fleeting moment in the final turns of the race. From there, Beaubier distanced himself, eventually taking the win as Hayes and Elias battled out back. Onto the back straight for the finish, it was Elias who drafted Hayes and stripped him of a second place finish by a 0.684 of a second.Though Beaubier did the double today, he kept it short while speaking with the press: “I had so much fun, you don’t get four bike battles for the lead very often. That was a lot of fun for sure.”Second-place finisher Elias said: “It was a crazy race. I’m very happy with the second race. Everything was normal. Also, they are faster than me. Roger, Cameron and Josh. At the beginning it was impossible. I keep pushing, finally when the tank was low, I felt better and was able to catch them. The last two three laps, I try for the maximum. Corner number five was my only opportunity, I try but made a mistake.”Josh Hayes, who took home third, said: “I think I’m more disappointed at this one than last one. I thought I did everything right to get to the line before Toni Elias.”With all of the action up front, the cameras kept their attention on the Superbikes. Herrin did the double in the Superstock 1000. Corti, aboard his trusty Aprilia RSV4 RF managed to get dual second place finishes in his class, with Hayden Gillim rounding out the top three in Superstock 1000.Race Two Results:DNF:Next stop? The MotoAmerica show heads to the south for round six at Barber Motorsports Park in Alabama. As always, keep your browsers open to Ultimate MotorCycling for all your racing needs.