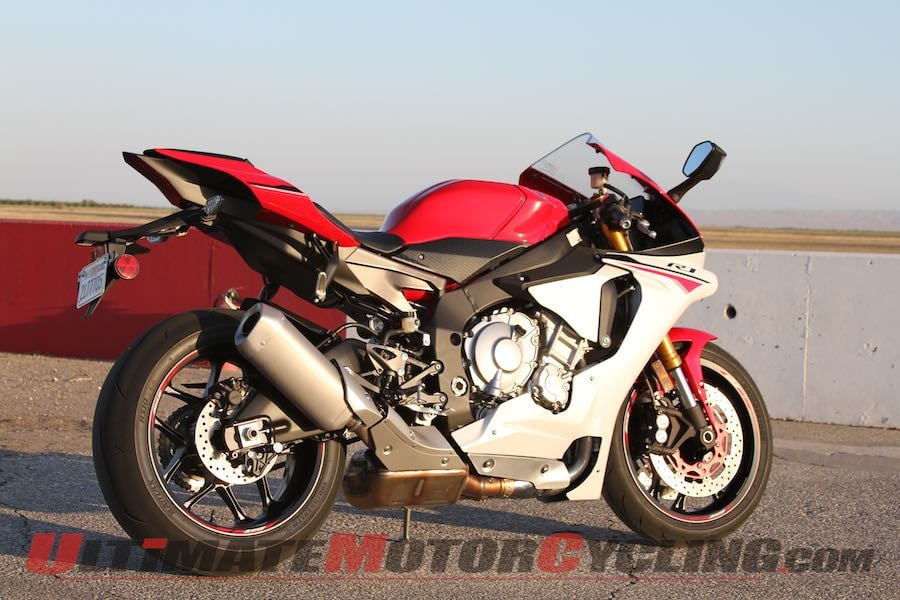 We found room in the trailer to bring Yamaha’s brand new YZF-R1 to a recent track-day outing at Buttonwillow Raceway Park. We were scheduled to test the 2015 Suzuki GSX-R 1000, one of the last race replica bikes devoid of electronic aids and an amazing bike in its own right. This was a perfect pair upon which to explore the dichotomy of two similar bikes with strikingly different guidance systems.The 2015 R1 is Yamaha’s first model to incorporate a full suite of electronic goodness; it’s a real eye-opener, and the result of Yamaha’s update is quite impressive. After many years languishing in analog mode while European manufacturers were heaping many and more electronic rider aids on their flagship bikes, Yamaha has stepped in, and – in one model year – has taken the game to a new level.UMC president Arthur Coldwells filed a story recently about the first ride of the R1 at the Sydney Motorsports Park launch event in Australia, and you can read the details here and in the upcoming May/June issue of Ultimate MotorCycling.In my recent review of the Gixxer, I discussed the pros and cons of rider aids. The pros boil down to higher performance and safety while the cons relate to those riders who feel that these additions lessen the quality of the ride and their experience. Personally, I’ve ridden them all and don’t feel that advanced electronics inhibit the ride one jot. One man’s passion is another’s poison, I reckon. 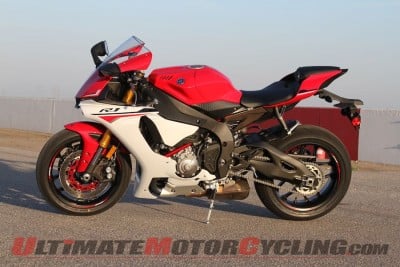 I was so excited by the Yamaha that I thought R1 fancier’s might want another first impression story. So, with a few reluctant revolutions, as with many large-bore V-twins, the engine erupts into a high idle with a sultry off-cadence and discordant sound that is unlike most other power plants. This unique Crossplane sound had heads turning on every pass through pit lane.As the engine warms, the sound settles down into a high idle yet any blip of the throttle is accompanied by that serious growl. Engage first gear, let out the clutch and this R1, rumored to be close to 200 horsepower at the crank, eases away from a stop rapidly and with no drama.As revs rise and internals components harmonize, the rider can feel that throttle action is linear with nary a flat spot and modulation is nigh on perfect. Accelerate and the tach jumps across the color digital dash board like Usain Bolt out of the blocks.As redline approaches, the indicator bar turns yellow, then red. I stay on the throttle then kick it up a gear with the speed shifter. Shifting action is smooth and without any notchiness whether you use the clutch for downshifts or just flick it up for the next gear.When on it hard, each successive upshift will loft the front wheel 6-12 inches. One needn’t be concerned since active wheelie control has your back and I just stay on the throttle. Wheelies through fourth gear is child’s play.Acceleration is brutal but smooth and the bike charges to the next corner with no head shake or tail wag. I set up for the turn, apply a generous amount of front brakes and the R1 sheds speed as though it’s thrown out an anchor. Trail brake and tilt the bike in and there is no drama. As Coldwells related in his review, this bike, like many of the latest superbikes, is actually easy to ride fast. I let my ego expand a bit but, upon completion of the turn, realize that without these rider aids I’d probably be bouncing upside down through the gravel alongside the track, or, in their absence, I would have ridden slower.I’m back on the throttle and the R1 just wants to run. Upon completion of each turn the bike lets me know that I could have gone faster, probably much faster. In the Riverside turn, a very fast right-hand sweeper the bike just hunkers down at full lean and practically demands as much throttle as I have the courage to apply. I must be doing 10-20 mph faster here than on the Gixxer because I know that TC won’t let me down.Up Phil Hill and the bike is simply screaming in second gear at well over 100 mph and the descent off the back side is controlled and smooth. Again, I should have been going faster but my name isn’t Rossi. 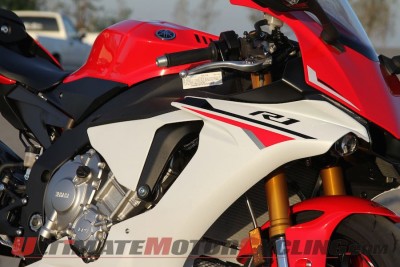 Even during a couple of wonky passes I made where I then came into the turn too hot, under-talented and way off the best line, the R1 was stable and predictable and helped make my mistakes appear planned and smooth.At middle and high revs it has its own kind of harmony and is one the few stock motorcycle engines that, to me, sounds as sweet as Aprilia’s V4 when at top revs. It’s that good and that is saying a lot because the melody played by an RSV4 at speed would have Mozart rethinking some of his sonatas.Fit and finish, as one might expect, is worthy of the finest manufacturers. It has great paint, superior plastic pieces, nice components and excellent chassis welds to underscore this view.Rider ergonomics are typical of the segment and my 6 feet fits well enough. The seat is typical and comfortable enough for our 20 minute sessions. I really like the new dashboard and the left-side menu control button and up/down arrows combined with the right-side thumb wheel controller make program changes natural, easy and intuitive.I’m a bad judge of good looks in bikes. My problem is that I like most of them. The proof is that I never hated the Ducati 999, the most universally disliked design (until its recent resurgence) that comes to mind. I don’t even mind the odd protuberances that some bikes have to allow for odd radiator and other plumbing requirements. That said, I love the looks of this new model, and so do most other observers I’ve talked to. And there’s not a protuberance to be found.Four sessions on the R1 showed me that Yamaha has the right of it. As we, reluctantly, tied the bikes back into the trailer I gave quite a bit of thought to what I had just experienced and came away in awe of the new YZF-R1 and its newly found world-class abilities. Now I can not wait to try the R1M.Starting MSRP is $16,4902015 Yamaha YZF-R1 Photo Gallery: