The 2016 Honda CRF450R marks the fourth year of the brand’s latest generation 450cc motocross machine. In these past four years, the bike has been piloted to a plethora of Monster Energy AMA Supercross main event race wins by the likes of Trey Canard, Cole Seely, and Eli Tomac.

The 2015 CRF450R finished on the podium at every single round of the 2015 Monster Energy AMA Supercross season. With its success in 2015, Honda implemented incremental changes to the 2016 model to further improve on an already proven machine.

Honda’s single cam (Unicam), four-valve powerplant makes some of the most linear, usable power in the 450 class, and the 2016 model is no different. Starting the 449cc mill with a 12.5:1 compression ratio requires a consistent kick, but thanks to fuel-injection, fires to life on the first try nearly every time. The meat of the powerband on the Honda is found in the bottom end to mid-range. 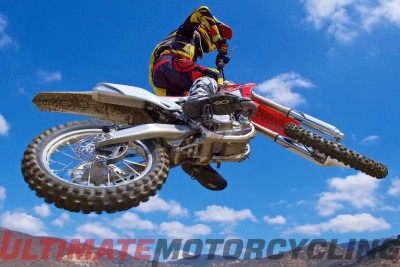 When exiting corners, the 2016 Honda CRF450R makes tractable power off the bottom and easily pulls into the mid-range. The 450 creates such optimal mid-range power that I found it best to shift before reaching the higher rpm. The power is extremely user-friendly, creating a bike that’s easy to race for anyone of any skill level.

Three ignition modes arrive stock on the 2016 Honda CRF450R. To switch the ignition map, the bike must be running and the maps are toggled via a button on the right side of the handlebar next to the throttle. After pressing and holding the button, it blinks a code signifying which map has been selected–one flash for the stock map, two for the mellow map, and three times for the aggressive map.

The smooth map is best utilized on a dry, dusty, slick track. The aggressive map allows the engine to rev a bit higher and seemed to rev up a bit quicker than the stock map. I found that the stock map works best for me; it provides a smooth, linear powerband with no surprises from bottom to top.

The smaller diameter chain roller, which was changed from 38mm to 34mm, is designed to allow the swingarm to travel further before chain roller interference restricts movement in order to improve traction. I was not able to notice this change. However, I am led to believe that a very sensitive rider may notice a difference.

The 2016 Honda CRF450R five-speed transmission is flawless. The gears are spaced perfectly for any type of track, as the 450 can be mainly ridden in second and third gear on most courses. While first-gear works wonders in a tight, inside line of a corner, second and third is perfect for just about any part of the track, including the outside line in corners, straightaways, and jumps of any size.

I found myself utilizing fourth gear on some of the high-speed straightaways of Pala Raceway (a former national track located in Pala, Calif.), but I am reluctant to use fifth gear. Fifth seems a bit too tall for a standard motocross track. Shifting through the gearbox is smooth and effortless.

The Kayaba PSF-2 forks offer high- and low-speed adjustment for both compression and rebound damping. The forks feel slightly more resistant to bottoming than last year’s model, and the stock air pressure of 35 psi worked well for me. However, I can easily see an intermediate or pro level rider increasing the air pressure and/or adjusting the high and low-speed compression and rebound damping to accommodate their skill level and speed. 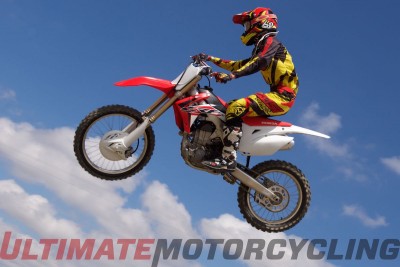 The Kayaba rear shock worked great from the start. For 2016, the rear shock can be adjusted eight clicks per rotation of adjustment, compared to only four, previously. The revised suspension settings including the new rear suspension link allow the CRF to track in corners extremely well and settle into ruts very nicely. The rear KYB unit also does not bottom out upon harsh or flat landings. I never had the 2016 Honda CRF450R kick out on me, or do anything unusual when faced with braking bumps in corners or on big downhills.

Acceleration bumps proved to be the same story. The CRF450R’s rear end refuses to kick or swap out, and I am able to get a great drive when exiting a corner. This is especially helpful towards the end of the day when the track becomes rough and rutted. I never felt the shock bottom out or cause any jolt through my legs on a hard landing either. Overall, I was impressed with how well the rear shock felt from the get-go, and pleased with how it worked in a variety of different tracks and conditions.

The plush suspension offers a smooth ride when dealing with the rough, squared-edged chop and is forgiving when over jumping or coming up short on a landing. The lightweight, nimble chassis makes cornering, scrubbing, and whipping effortless.

The 2016 Honda CRF450R’s handling is its most notable and praiseworthy characteristic. In a nutshell, the bike feels and reacts like a 250 four-stroke. The new 5mm longer fork raises the front end and the revised rear suspension link corresponds with the longer fork. These changes were implemented to assist in chassis balance and improve tracking. The changes are noticeable – the 2016 Honda CRF450R feels a bit more stable than last year’s model, especially at high speeds. The bike’s cornering ability is amazing because of how nimble the bike is and the same can be said when whipping and scrubbing off the faces of jumps.

Thanks to the CRF450R’s nimbleness and lightness, I was able to push harder and longer throughout the course of a moto. Most 450 motocross machines can be a handful for most average riders, but such is not the case with the 2016 Honda CRF450R. All levels of riders will love the lightweight, flickable characteristics of the bike and find themselves shaving seconds off their lap times because of it.

In the braking department, the 260mm front rotor possesses the perfect balance between a strong, yet progressive feel. Both the front brake and clutch lever have an agreeable bend that most riders will enjoy.

The 2016 Honda CRF450R comes standard with the Renthal 971 handlebar, which offers a comfortable feel for the average sized rider. The Dunlop Geomax MX52 front and MX52 rear tires hooked up well at all of the tracks we tested at, and that included multiple types of terrain ranging from soft and loamy to a more intermediate, harder packed track. Both the front and rear rubber held up well and maintained a sharp edge after many rides. 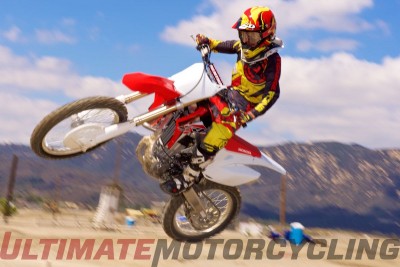 The dual muffler exhaust system is quiet, as each muffler features a quarter-size hole for the exhaust to escape. While easy on the ears, I am lead to believe the Honda would see a noticeable power gain with an aftermarket exhaust system. A pro level rider will love the handling and lightweight qualities of the bike, but will certainly want to throw a full exhaust system on to coax a little more power out of the red machine.

Keep in mind that due to the dual exhaust, aftermarket systems are expensive. For instance, Yoshimura’s titanium RS-9 Dual System runs $1395 ($400 more than the equivalent system for the Yamaha YZ450F). Riders who will enjoy this bike most in the stock configuration include beginners, novices, intermediates, and especially riders who are moving up to a 450 machine from a 250 four-stroke.

The 2016 Honda CRF450R’s small improvements from last year’s model have proven to be a continuing step in the right direction. The CRF450R’s handling and engine make it the easiest bike in its class to ride. While the handling is the CRF450R’s strongest point, the engine offers a linear powerband with no surprises from bottom to top. Honda has certainly found their niche in the premiere 450 class by developing the most nimble, lightweight 450cc machine on the market.