Besides a few teaser videos, the details were hush – until late Tuesday. This is when Victory exposed the bike that will compete at the iconic “Race to the Clouds” on June 28 with Cycle World’s Don Canet at the controls.

The name derives from the 156 turns of the Pikes Peak International Hill Climb course, which ascends from 4,720 to 14,110 feet in 12.42 miles. The race that debuted in 1916 – making it the second oldest American motorsport event next to the Indianapolis 500 (1911) – begins at Mile 7 of the Pike’s Peak Highway and finishes on top of the mountain with grades averaging seven percent.

[Read about the latest released motorcycles]

The exact specs of Victory’s Project 156 still remain hush, but the performance-driven cruiser manufacturer released loads of photos and some commentary from the people leading the efforts.

“We have an intense focus at Victory Motorcycles to prove the performance of our vehicles,” said Rod Krois, Victory General Manager. “Competing as an American OEM at America’s race is an exciting opportunity. The grueling conditions at Pike’s Peak provide the perfect proving ground for our new Project 156 race engine.” 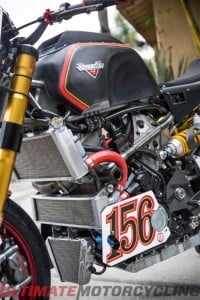 Victory says the Project 156 motorcycle is a hand-built road-racing bike with a prototype Victory motor developed at Victory’s Minnesota research and development facility. The powerplant features Twin 67mm intake throttles with downdraft runners for maximum power and torque as well as a performance valve-train that includes titanium intake and exhaust valves to allow for maximum engine speed.

The chassis was designed by 250 AMA GP Champion Roland Sands and his team at Roland Sands Design: “This truly has been an All-American effort,” said Roland Sands. “The Race to the Clouds is a legendary event and we couldn’t be more proud to partner with Victory on the endeavor. We’ve built lots of custom motorcycles, but building a purpose-built race bike for this project has been a unique experience that we’ll remember for a long time.”

Canet, who finished third in the Open class aboard a Ducati Multistrada 1200 at 2014 PPIHC (10:10.101), also commented on riding at this year’s Race to the Clouds: “Ever since Victory and Roland Sands introduced me to this project I’ve been counting down the days to the event.

“This will be my second time racing the Pike’s Peak International Hill Climb. Now that I’ve had a taste of what it’s like I’m ready to get back and finish stronger in 2015.”

To support the Pike’s Peak International Hill Climb, Victory Motorcycles has moved the 2015 American Victory Rally to Colorado Springs, Colorado from June 25–28. The weekend will feature not only Project 156, but loads of riding through stunning scenery, and a showcase of Victory Racing initiatives including the NHRA Drag Racing team. Victory owners can visit http://vic.mn/AVR for more details.