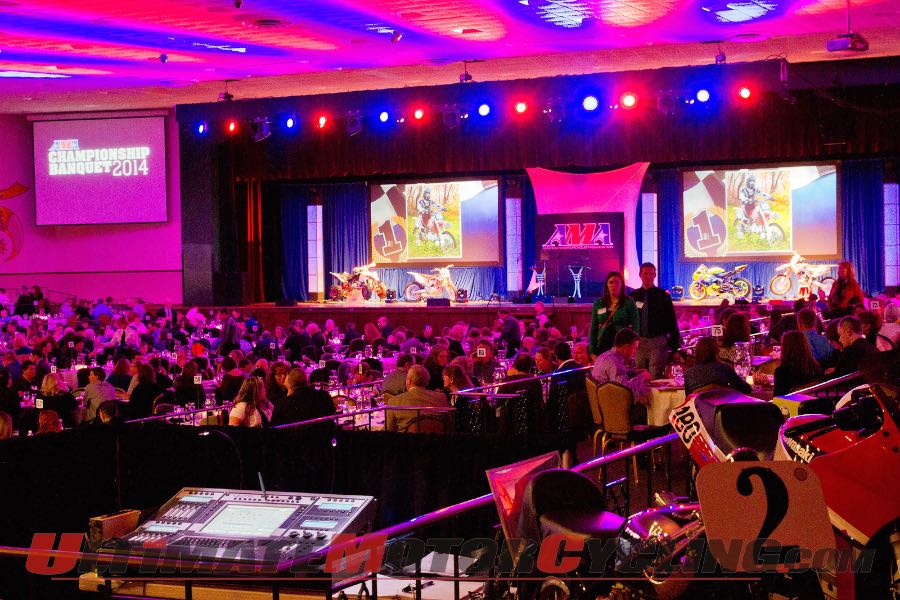 2015 AMA Championship BanquetThe country’s top racers from American Motorcyclist Association-sanctioned motorcycle and all-terrain vehicle competition were honored at the AMA Championship Banquet on Saturday, Jan. 17, at the Aladdin Event & Conference Center in Columbus, Ohio.The AMA presented champions their 2014 AMA National No. 1 plates, recognized the season’s best organizers and announced the 2014 AMA Athletes of the Year.AMA President and CEO Rob Dingman congratulated the racers and their families on their success in 2014 and thanked them for their contributions to motorcycling.“The riders, families, crew members and sponsors in this room tonight are what make AMA-sanctioned competition the greatest in the world,” Dingman said. “Here, we recognize those who excel in the simplicity and ferocity of dirt track, the balance and control of trials, the speed and grace of road racing, the daring of motocross, the rush of hillclimb and land-speed competition, the endurance and variety of off-road racing, and the extreme demands of ice racing.“Congratulations on your success in 2014, and thank you for your support of the AMA!” Dingman said.Motorsports media personalities Laurette Nicoll and Greg White emceed the banquet, which awarded national championship trophies to racers in more than a dozen AMA-sanctioned series and events.The AMA’s highest competitive honors, the AMA Athlete of the Year Awards, recognize riders from each of the two categories of national championship competition — AMA National Championship Series and AMA Grand Championships — as well as a rider from ATV competition. AMA Athletes of the Year are voted on by AMA members.Kailub Russell, Grand National Cross Country XC1 champion and the top American at the International Six Days Enduro, won the AMA National Championship Series Athlete of the Year Award. Russell, from Boonville, N.C., races for the FMF/KTM factory team.“It was a good year for me, both in the GNCCs and going to the ISDE, and I appreciate this award,” Russell said. “I have to thank my family, my wife and the Racer Productions crew, and I also want to wish a happy birthday to my step mom Carrie. It takes a large group of people to win a national championship, and it’s tough to get the job done, but motorcycle racing is a fun sport.”R.J. Hampshire, the 2014 AMA Motocross Horizon Award winner and multiple champion from the AMA Amateur Motocross National Championship, won the AMA Grand Championship Athlete of the Year Award. Hampshire, from Hudson, Fla., competes in the 250SX East Supercross Championship for GEICO Honda.“For me, this is a great way to cap off not just the year, but it also caps off my amateur career,” Hampshire said. “I’m looking forward to the [250SX East] Supercross season starting in a few weeks. Thanks to everyone for this award. I really appreciate it.”Chris Borich, who won the XC1 ATV championship in the GNCC series, was the AMA ATV Athlete of the Year. Borich, from Sunbury, Pa., races for Team Maxxis. Borich was unable to attend the event due to off-season training. Tim Cotter, GNCC event director, accepted the award on Borich’s behalf.“The first thing that comes to mind when I think of Chris is that he is tenacious in his racing,” Cotter said. “When he goes to that starting line, it is all about that first turn, but the most important thing about Chris is his family. They are always there. His parents are always there supporting him.”In addition to the AMA Athlete of the Year Awards, the AMA also recognizes outstanding competitors in three categories: AMA Female Racer of the Year, AMA Vet/Senior Racer of the Year and AMA Youth Racer of the Year.Erin Hunter-Sills, land-speed racer and AMA and world record holder, was announced as the AMA Female Racer of the Year. Hunter-Sills is from San Francisco.“I am incredibly honored, primarily to represent all of the women in the room — from the grandmothers to the 13-month old I saw sitting on a motorcycle over here and naturally grabbing the throttle and turning her wrist,” Hunter-Sills said. “I’m honored not only to represent our half of the species, but the sport of land speed motorcycle racing, where women and men race against each other, which I think is genuine and puts us on equal footing regardless of gender.”The AMA Vet/Senior Racer of the Year was Steve Bromley from Trevose, Pa. Bromley won the 750 Hotshoe and 50+ Open championships in the 2014 AMA Vintage Dirt Track National Championship Series.“It feels pretty awesome,” Bromley said. “It felt good just to be nominated for this award, but to win it felt special. I just want to thank my brothers and my dad — he passed away a couple years ago and he got us all into racing. Plus, I want to thank my wife, who is behind me 100 percent.”Jordan Jarvis, who won the Girls Jr. (9-13) championship at the AMA Amateur National Motocross Championship and the Girls (7-13) championship at the AMA Arenacross Grand Championship, was the AMA Youth Racer of the Year.“We’ve had a really good year this year, and I can’t wait to see what 2015 brings to us,” Jarvis said. “We’ve had some struggles in the past, and getting this award really means a lot to me. It is special to be recognized among youth racers from all disciplines. I want to thank my whole family. They’ve really done a lot for me. I can’t thank everybody enough.”Sponsors and supporters of the 2014 AMA Championship Banquet included 1.7 Cleaning Solution, ASK Motorsports, Atlas Brace Technologies, Barnett Clutches, Beta USA, Bromley Motorcycle Sales, Brooks Leather Sportswear, Fly Racing, Galfer USA, Helmet House: Tourmaster, Iron Pony Motorsports, Matrix Concepts, Next Components, Shoei Helmets, SPOT LLC.Other award winners announced at the banquet included:Motocross Organizer of the Year
2X PromotionsOff-Road Organizer of the Year
Racer ProductionsTrack Racing Organizer of the Year
Industry SpeedwayATV Organizer of the Year
Iowa ATV Hare Scrambles SeriesRecreational Road Riding Organizer of the Year
ABATE Of OhioRecreational Off-Road Organizer of the Year
Dixie Dual SportAMA Club of the Year
San Jacinto High RollersAMA Media Award
Vurb Moto