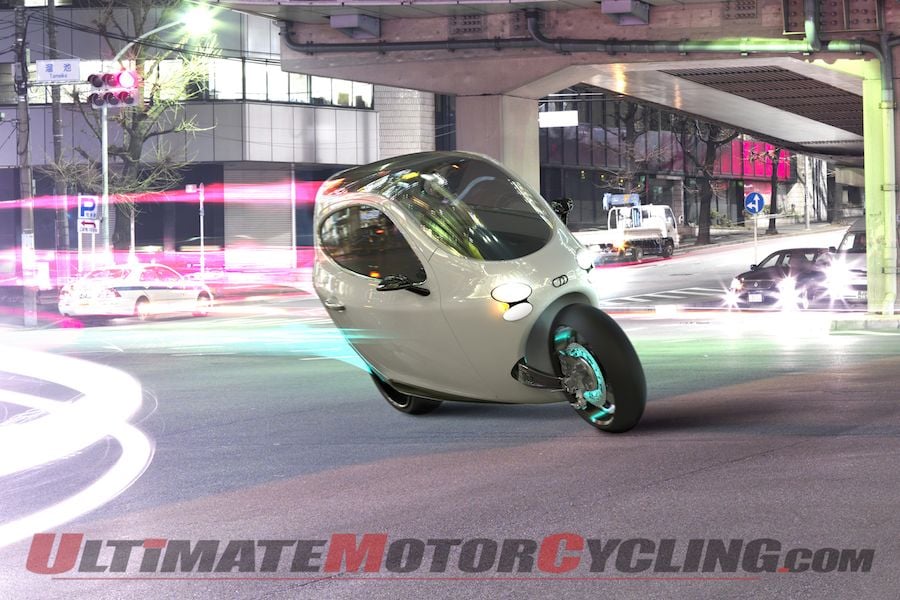 Lit Motors C-1 First LookIt had to happen — the same gyroscopic stabilization technology that makes it possible to keep a missile on a stable trajectory and made inventor Dean Kamen’s Segway possible had to move into the motorcycle world.Well, it is happening, with the impending roll-out of Lit Motors C-1 (C-1 is a working title of sorts—the final name will be selected before the bike enters full production).The C-1 is also an electric vehicle, joining a growing list of competitors looking ahead to the EV revolution on two wheels. But the C-1 has a remarkable edge in terms of advancing the breed; it stays vertical at a dead stop without a kick stand and it requires no motorcycle riding skills to operate. Yet, it handles like a motorcycle.Think of the C-1 as a fully streamlined motorcycle, but without the potentially embarrassing situation of falling over at stop signs. It has doors, airbags, seat belt, a bucket seat, brake and accelerator pedals and a steering wheel—like a car—but it has only two wheels.Before you write it off as gimmicky little parking lot troll, consider its pre-production design specifications: The C-1 will have a top speed of 100+ mph (160+ kph), 0-60 mph (0-100 kph) in <6 seconds, and a range of 200 miles (320 km) per charge. Dimensions: 800 lbs. (360 kg) curb weight, 112″ (2.8 m) long, 55″ (1.4 m) tall, 40″ (1 m) wide.Final production specifications have not yet been established, so all figures are best estimates from Lit Motors. If they achieve these benchmarks, the C-1 will be serious transportation and more than a little fun.The C-1 uses twin gyroscopes to keep the vehicle upright when stopped. When parked, “landing gear” are deployed to keep the vehicle upright. The operating system enables a steer-by-wire system that allows the C-1 to lean into corners like a conventional motorcycle, but the gyroscopes maintain stability at all times—even in reverse. Drive power comes from high torque, direct drive, in-hub motors.Here’s how it works. The C-1 processes input from an array of sensors from road surface conditions to wind to traffic and others and combines it with driver inputs from the steering wheel and accelerator/brake pedals.That data is translated into front wheel movement and a precise lean angle to complete the desired turn. The C-1 combines automobile control interfaces with motorcycle handling and braking dynamics, which Lit Motors says is “both intuitive and very unique—and very, very fun!”Lit Motors assures that all critical systems are double- or triple-redundant and it is using aerospace standards for system redundancy and failsafes. Steering is backed up by a direct mechanical linkage, brakes and landing gear are also backed up assuring driver control in any the event of primary system failure.In terms of seating and cargo capacity, the C-1 has enough space for an adult passenger and a small bag, or about the same amount of cargo you can carry on a plane (roller bag, briefcase, a few bags of groceries), according to Lit Motors information. Interior space ergonomics are designed to accommodate driver (rider?) height from 5”-0” to about 6’-3.”Current specification battery is lithium iron phosphate but the company says upgrades to new battery technology as it comes to market will be easily done, even for C-1s already on the road.Charging will be accomplished from a standard 120v wall outlet in about six hours using an onboard charger. Higher-voltage charging options will be available, allowing a four hour charge time from 220V outlets and an 80% charge in about a half hour from DC quick charge stations.The C-1 only requires a 10 kWh battery pack, which is supplemented with the company’s patented KERS regen braking system, giving another virtual kWh by turning braking force into more operating energy.Handling, according to the company, will be very stable on wet roads and uneven surfaces due to its all-wheel drive and gyroscopic stabilization. Use of antilock brakes has not been specified for the vehicle at this point. Amenities, such as climate control, sound system and other electronics are anticipated.Details as to warranty, service availability arrangements and other aspects of customer service will be finalized as the C-1 goes into full production.Lit Motors was founded by Danny Kim, native of the Portland, OR area. He developed the C-1 concept after traveling the world and coming to the realization that two wheeled transportation was a dominant form of getting around and that efficient, non-fossil fueled vehicles in the two-wheel configuration were the way to go.He pursued this concept at the Rhode Island School of Design (RISD), earning a degree in Industrial Design and Sustainable Transportation while working with teams of engineers from Olin, Brown, and MIT. After graduation, he relocated to San Francisco, California, and founded Lit Motors in February 2010.To date, five hand-built prototypes, including a full-scale driving prototype, have been completed and the company indicates it is on track to begin production of the C-1 by the end of 2014.Estimated MSRP is $24,000 though final pricing has not been established and other costs such as taxes, fees and so on will affect final sale price as well as the effect of cost-lowering EV incentives.Keep up to date on the C-1 right here at Ultimate MotorCycling, and also check out Lit Motors.