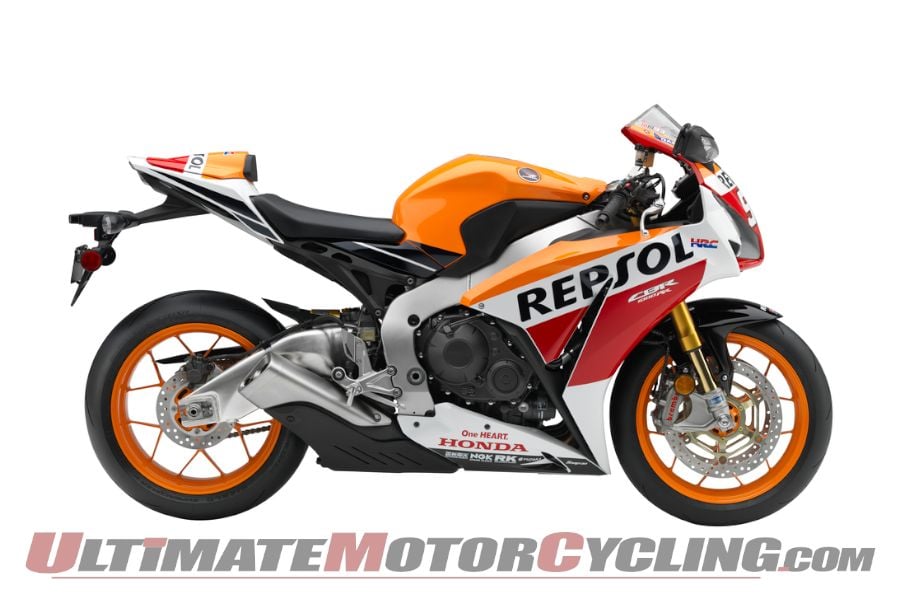 2015 Honda CBR1000RR with Repsol Livery
Due to its success in the 2014 MotoGP Championship, including a second-straight title with Marc Marquez at the controls of the RC213V, and taking the manufacturer’s title, Honda is offering its 2015 CBR1000RR models in Repsol livery.Both the base CBR1000RR and the upgraded CBR1000RR SP will be offered in the same colors that don the RC213V in MotoGP.“Honda has a long record of success on the racetrack, and we’re proud to recognize the company’s latest accomplishments with a special edition of the CBR1000RR,” said Lee Edmunds, Manager of Motorcycle Marketing Communications at American Honda.“The CBR supersport series has achieved a myriad of accomplishments in its own right, so we’re happy to offer the liter bike in the Repsol Honda colors of our World Championship-winning MotoGP team.”With one round remaining in 2014 MotoGP, Marquez has earned 12 victories – tying the record for most wins in a single season with Mick Doohan who set the record in 1997 (also on a Honda).Marquez, who clinched the title four-rounds early at Motegi, also helped Honda earn its 21st Manufacturer championship in the premier class, and 63rd across all classes.The 2015 CBR1000RR and CBR1000RR SP will feature the Repsol Honda, along with distinctive championship badges on the fuel tank. The bikes will arrive with #93 and #26 number-plate graphics, paying homage to Marquez and his teammate Dani Pedrosa.The Honda CBR1000RR – also available in White/Blue/Red and Red – features a 43mm Showa Big Piston Fork, Unit Pro-Link rear suspension, twin-spar aluminum chassis, assisted slipper clutch and advanced Honda Electric Steering Damper (HESD). he Red version is also offered with Combined Antilock Braking System (C-ABS).The track-focused SP (available in the Repsol Edition only) achieves the maximum in performance through fully adjustable Öhlins front and rear suspension, Brembo front brakes, Pirelli Diablo Supercorsa SC premium tires and hand-selected and weight-matched piston and connecting rods.The Honda CBR1000RR was last updated in 2014 with additional horsepower and rider ergonomics, along with a new windscreen.Following are the colors and MSRP for the 2015 CBR1000RR; the 2015 models will be available in January.Colors:
• CBR1000RR: Repsol Edition (new); White/Blue/Red (new); Red (new)
• CBR1000RR ABS: Red (new)
• CBR1000RR SP: Repsol Edition (new)Prices:
• CBR1000RR: $13,999 – $14,599 (Repsol)
• CBR1000RR ABS: $14,999
• CBR1000RR SP: $17,299