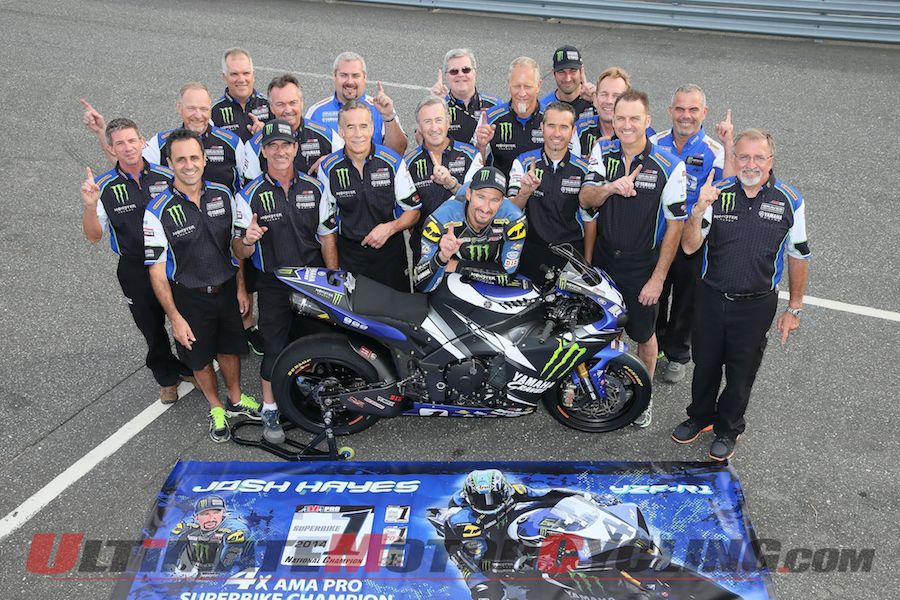 Yamaha Double Dose of DominanceFor the fifth straight year, Yamaha’s YZF-R1 has proven to be the steed to beat in AMA Pro SuperBike. Yamaha machinery was also the top force in AMA Daytona SportBike, the YZF-R6 taking the title.In the SuperBike class, Josh Hayes clinched the title in the final round at New Jersey Motorsports Park.Hayes went into the last race with a 40-point lead over Monster Energy Graves Yamaha teammate Cameron Beaubier. He started on the pole and despite a strong challenge from Beaubier, crossed the line first, but not without some drama.AMA Pro Racing deemed that one of his multiple passes on Roger Hayden was made under a yellow flag, meaning that Hayes wouldn’t be credited with the win. AMA Pro Racing imposed a 20-second time penalty on Hayes, moving him back just one position in the official race results to second place. With Beaubier finishing in fifth place, 20 points were enough for Hayes to clinch the title.With his fourth AMA Pro SuperBike title secure, Hayes rode a solid second race to victory on Sunday, his seventh of the season. With seven wins, he finished the season with 285 points in the final standings and added to a total of 48 wins in his AMA ProSuperBike career.After the weekend, Hayes reflected on the event: “I wanted to win the first race, and I gave it everything I had. I didn’t want to come here and have anyone feel that I was riding around for the Championship. In fact, I wasn’t even really thinking about the Championship too much. I was confident out there despite the rainy conditions.“I knew that I just had to ride my race and I’d be OK. I had fun today. The second race was definitely not as smooth as it looked, and with Cameron leading, I felt like I was losing ground, but I relaxed and just ran my race. I was running some pretty good lap times, and things were starting to come around.“I’m gutted for Cam because I wasn’t sure that I could catch him, and I really wanted a Yamaha one-two. I’m glad to win this last race of the season, though, especially after winning the Championship yesterday. It’s been an awesome season, and I’m so lucky to be racing for Monster Energy Graves Yamaha. Five straight Championships for Yamaha and the R1 is just amazing.”Yamaha’s RoadRace Factory Jake Gagne claimed his first AMA Pro GoPro Daytona SportBike title. Gagne led MotoSport.com Meen Yamaha’s Jake Lewis by just seven points, going into the final round.Gagne rode a strong race on Saturday, finishing in second place, while Lewis could do no better than 17th place. Like Hayes, Gagne also finished the season on the top step of the podium by winning Sunday’s race. The victory was his third of this season, sweetened for Team Yamaha by the fact that Yamaha YZF-R6s made up the top five finishers.“It’s incredible,” said Gagne. “This class is stacked with so many fast riders, and a lot of the guys are on Yamaha R6’s like me. The last thing I thought about today (Saturday) was to have this wrapped up.“I’m stoked for the Yamaha and the whole RoadRace Factory crew. To do it for those guys and to pay off all their hard work is incredible. Ending the season with a win is amazing. Dane and Garrett and those guys were really haulin’, and I could see on my pit board that I needed to turn it up a little bit. So that’s what I did, and I was able to build up a little bit of lead. I’m glad it worked out for me and my team, not only today, but all season long.”