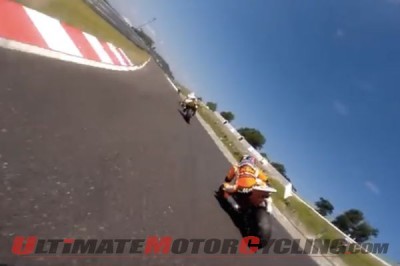 Suzuka 8 Hours VideoYamaha France GMT94 Michelin team didn’t have the best luck at the Suzuka 8 Hours – round two of the 2014 FIM Endurance World Championship.Following a start plagued by rain, and a shortened race, the GMT94 team took ninth in Japan.But due to a second-place finish at the Bol D’or 24 Hours season opener, the GMT94 Yamaha team controls the point standings.At the Suzuka 8 Hours,GMT94’s David Checa didn’t have the perfect opening ride aboard the Yamaha YZF-R1. Riding under wet conditions, he dropped three laps behind the lead during the first two hours, before handing the Yamaha’s controls to teammate Kenny Foray on a dry track in 27th position.Foray got the bike back on pace, as did the third rider, Mathieu Gines. The team was able to recover positions, eventually finishing a respectable ninth at the finish line. Winning the Suzuka 8 Hours was Musashi RT Harc-Pro Honda ( Takumi Takahashi, Leon Haslam and Michael van der Mark).The finish was enough to give the team a seven-point lead over the riders who won the opening round – SRC Kawasaki – as the series heads to 8 Hours of Oschersleben in Germany on Aug. 23.Speaking after the race, Gines says “I love Suzuka. I would like to thank the team who gave me the opportunity to get there. I learned a lot and now I’m looking forward to Oschersleben, that is a track that I like a lot also. For now, we can breathe and enjoy the fact that we took the lead of the Championship!”The GMT94 Yamaha team recently uploaded some onboard footage of Gines lapping the Suzuka circuit during the Suzuka 8 Hours. The footage shows the absolute focus needed to not only finish in the top 10 of an endurance race, but simply finish.For a recap of the race, visit 2014 Suzuka 8 Hours Results.