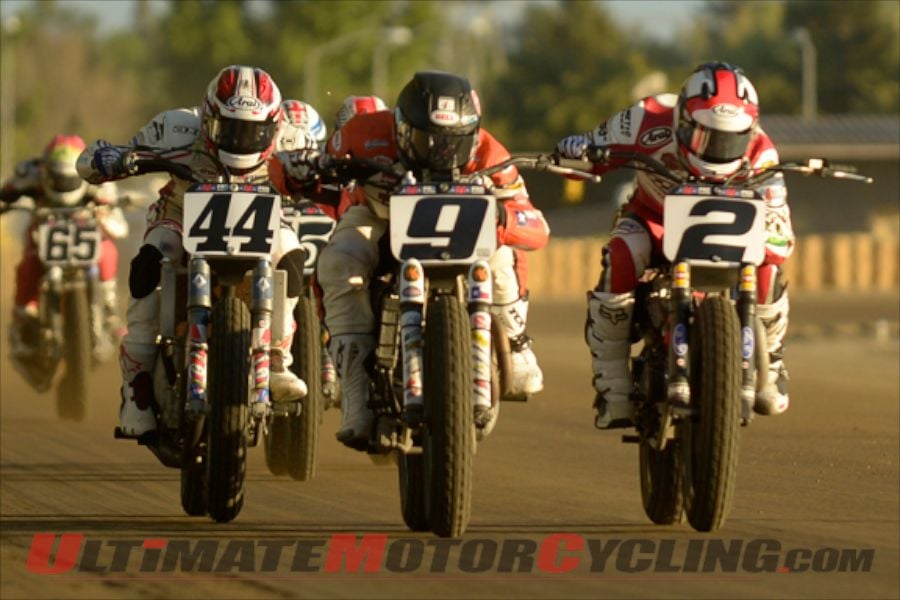 Harley Wrecking CrewHarley-Davidson Wrecking Crew rider Jared Mees claimed a hard-fought third-place finish after a five-way battle in the AMA Pro Flat Track Grand National Twins main on the Sacramento Mile at the Cal Expo Fair.Riding the Rogers Racing/Las Vegas H-D/Blue Springs H-D Harley-Davidson® XR750 motorcycle, Mees officially led the 25-lap race twice before finishing just 0.056 seconds behind winner Bryan Smith on the Crosley Radios/Villa-Esparza Kawasaki.Harley-Davidson Screamin’ Eagle Factory Team rider Brad Baker qualified on the second row and finished sixth after getting a poor start.“We had a second-row start and I ended up at the tail end of the lead group,” said Baker, the defending AMA Pro Grand National champion. “I wasn’t getting a good drive off the corners and lost the draft and slipped back to the second pack. By the middle of the race I found a good line and was able to make a few passes back to sixth. But once you lose the draft at Sacramento it’s tough to catch back up.”Harley-Davidson Wrecking Crew rider Nicole Mees also qualified for the main and rode the Black Hills H-D XR750 to a 15th place finish.Smith qualified on the pole for the main and took the lead in the opening laps with a pack of riders that included Jared Mees, Ramspur Winery/Lloyd Bros Motorsports rider Jake Johnson, and Zanotti Racing/Moroneys H-D rider Kenny Coolbeth Jr.Racing wheel-to-wheel and engaged in a drafting battle on the long straights, those four riders shuffled positions for the first half of the race, with Mees and Johnson each leading at least a lap. Hot Shot Motorworks rider Brandon Robinson worked up to the lead pack on lap 14.Coolbeth fell off the pace on about lap 20, and Robinson lost the draft of the leaders a lap later, leaving Smith, Mees and Johnson elbow-to-elbow at the front for the final four laps. Smith led coming out of the last turn and was able to hold off the last drafting attempts of Mees and Johnson, beating Johnson across the line by just 0.030 seconds with Mees right on Johnson’s wheel. Robinson was fourth, 0.505 seconds back. Coolbeth was fifth, 1.9 seconds behind Smith. Baker led the second pack across the finish line.“This was a great race and lot of fun,” said Mees, who recorded the fastest lap of the race. “You can race like this with riders you know and trust. I just couldn’t quite get past them at the very end, but I think we showed that we have a Harley that can run with the Kawasaki bikes.”Mees won the four-lap Dash for Cash bonus race.After eight of 16 events on the AMA Pro Grand National schedule, Smith takes over the series lead with 150 points. Mees is just two points back in second place with 148 points. Johnson is third with 142 points, followed by Coolbeth with 129 points, and South East H-D/White’s H-D rider Sammy Halbert with 123 points. Baker is in eighth place with 82 points.AMA Grand National Twins racing resumes on August 5 at the Black Hills Half-Mile by Dunlop at the Black Hills Speedway in Rapid City, S.D.