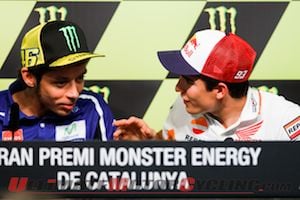 2014 Catalunya MotoGP Press ConferenceAn undefeated Marc Marquez highlighted the pre-race press conference Thursday at the Catalunya circuit in the Repsol Honda pilot’s home country of Spain.The 21-year-old Marquez, who had won the opening six rounds of 2014 MotoGP from the pole, was joined by the Movistar Yamaha MotoGP duo of Valentino Rossi and Jorge Lorenzo, Monster Tech3 Yamaha’s Pol Espargaro, Pramac Racing Ducati’s Andrea Iannone and the current Moto2 points leader, Marc VDS Racing’s Tito Rabat.With his wins, Marquez has a perfect 150 points, 53 ahead of nine-time World Champion Rossi. Though quite a lead after six of 18 rounds, the youngster is staying clear of hubris, knowing he must be cautious.“It is special to be riding at my home track not too far from my home town, but it is more special to be arriving here in this form. It is almost like if I don’t win the race it is a disaster, but it’s not like that. I expect Jorge and Valentino to be strong here from the beginning, but if we get our set-up right here we can be competitive too,” Marquez says.“Some people talk about me winning all the races this year, but it’s almost impossible. My confidence and level is high at the moment but winning each single race is difficult.”Rossi arrives at Catalunya following a positive performance two weeks ago at Mugello, the Italian’s favorite circuit. Rossi – who started his 300th GP at Mugello – finished third, which was his fourth podium so far this season.Regardless of the result, the 34-year old didn’t do well in qualifying. He qualified 10th on the grid aboard his YZR-M1 10th, but hopes to improve on his performance at Catalunya.“In MotoGP the qualifying has become much more important. We haven’t been on the front row this year, but we have the potential to be there. Unfortunately in Mugello we made a mistake with the front tyre. We were half a second off pole but on the fourth row,” Rossi says.“When I got to the front in the race Jorge and Marc already had one a second gap, so I couldn’t get the slipstream. I lost the chance to fight with them on the Saturday.”After struggling much of the season, Rossi’s teammate Lorenzo returned to his usual ways at Mugello. The two-time MotoGP Champion earned second after an intense battle with Marquez. And he arrives oat his home circuit in Catalunya with additional incentive – he has won at the track for the past two years.“In Mugello we made a step forward with the bike, and I felt much better physically. We arrive here in good shape. Barcelona is usually a good track for the Yamaha and my riding style and we finished on the podium here for the last few years,” Lorenzo says.The rookie Pol Espargaro was next to talk. The satellite Yamaha YZR-M1 pilot grew up near the Barcelona-Catalunya circuit, and this will be his first home race in the premier class.“I’m taking it slowly, learning a lot this year and enjoying it. I am learning a lot when I follow Jorge, Marc and Vale, more than a whole race in seventh. For sure if we continue we can get closer, maybe if we get lucky we can get the podium,” Espargaro says.At Mugello, Pramac Racing Ducati’s Andrea Iannone took his best-ever premier class qualifying effort with second. But as the race went on, he fell back, eventually finishing seventh on the open-class GP14.“Mugello for me was a very good weekend with my first front row in MotoGP. I am happy for this. The race was very difficult, I wanted to push very hard in the first laps so I used the soft tyre, but the track is not perfect for this. It is important that my performance was good, now I want to keep improving race by race,” Iannone says.Also at the conference was Moto2’s Tito Rabat, who won three races this season, including Mugello: “We need to make a good qualifying and race start, because the speed of all the riders is very similar and they are so hard to pass. There are always so many riders who can win the race, so we always need to push.”Practice gets underway at 9 a.m. local time with Moto3, which will be followed by MotoGP and Moto2.For a preview, visit 2014 Catalunya MotoGP Preview.Also, ahead of Thursday’s FIFA World Cup Brazil, a few riders attended the launch of Alpinestars’ MotoGP World Cup Race Boot Design Series on the Barcelona-Catalunya starting grid. Showing off their boots – and demonstrating some soccer skills – were Marquez, Cal Crutchlow, Dani Pedrosa, Scott Redding, Hector Barbera and Broc Parkes.