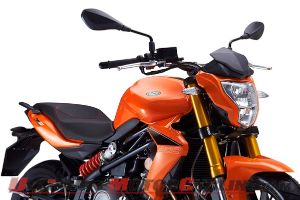 Benelli BN 302 Motorcycle DebutAhead of the 2013 EICMA (Milan Motorcycle Show), Benelli, one of Italy’s oldest motorcycle manufacturers now owned by Qianjiang Group in China, unveiled a new entry-level bike – the BN 302.Speaking of the BN3 02, Benelli says: “Slim, light and handy, BN302 is the two wheels which take confidence immediately. In the curves it is fast and snappy. In the rise and fall it is agile and responsive, behaving like a big motorcycle. In the city, it becomes a excellent ally to ‘fight’ the traffic of metropolis, where BN302 is undoubtedly able to distinguish itself from direct competitors.”This new naked sportbike, which gives will compete with the Suzuki GW250, the Ninja 300, and Honda’s CBR250R,  features an inline two-cylinder four-stroke engine with fuel injection, a double camshaft and four valves. The engine is hooked to a six-speed transmission and a chain final drive.The BN302’s powerplant, which produces 37 horsepower at 11,500 rpm, and 20 ft lbs of torque at 9000 rpm, is wrapped inside a steel trellis frame. Suspension duties are handled by a 41mm inverted hydraulic-damping front fork, and a rear shock absorber with spring preload adjustment.Stopping the new Benelli BN 302 are twin 260mm brake discs up front, and a single 240mm disco out back. The bike rolls on 17″ aluminum alloy rims wrapped in 120/70 17 (front) and 160/60 17 (rear) tires.The gas tank, which holds 4.2 gallons of fuel, has a sleek design that flows with the fairings, giving an entry-level bike a sporty look.The BN 302 will be offered in orange and white, and will hit showroom floors in summer of 2014. The price has yet to be determined.Benelli also unveiled another new motorcycle ahead of the EICMA – the BN 600 GT.